How can I best prevent from automatically refocusing during movie mode recording?

I believe my camera is automatically refocusing using the AF, and it's causing intermittent blurring within the playback.

When I playback the recording, I can physically see the actual camera adjusting focus automatically, and it causes a major distraction since spur of the moment blurring is involved and in each case, it's about 1 second long.  I'm unsure what to do.  It seems like it occurs during low-light conditions more (especially if the low-light is in the background).

Should I try increasing the IOS? I understand it goes up to 6400 for movie mode.

I shoot using a Manfrotto 504HD,546BK Video Tripod Kit with 504HD Head and 546 Tripod - Black.  Some of the subjects are moving (camera is panning either while I am reporting or not moving as a stand-up reporter from a fixed location).  I shoot both inside and outside.

I've tried using a Manual Focus before but I suffer the consequences when shooting outside as I don't get the best focus when trying to manually adjust the focus.  Perhaps I should switch between MF, then AF and back to MF again to have the best possible picture, as switching it back to MF again would carry over exactly from the AF I would imagine without any needed adjustments if I'm already ready to shoot the target I setup for. I work in both high, medium and low light and the problem persists.

Please...any help would be greatly appreciated.

ISO won't have any impact on focus.  It only effects the "exposure", not the focus ability.  Using a lens with at least a 2.8 aperture will help slightly, as far as the camera being able to lock focus (center point only), but it won't make the camera smarter.  It seems like it can't decide what the subject is in low light situations and is bouncing back and forth.

You could try different focus modes and see if they help at all, but truthfully I'm not really sure how the AF system works when shooting video; not something I really do.  Maybe someone else can weigh in.  Using manual focus is most likely your best bet.  It's what most the serious videographers do, and this is one of the many reasons why they do so.

Finally, you might consider using lighting as well.  But I'm not sure if you want to open that pandora's box or not.

I believe my ISO is set at the lowest level, but I would have to check.  Should I even try to adjust the ISO?  The lower the ISO, the sharper the image, correct?

I do agree that it seems like the lens can't decide what the subject is in low light situations and is bouncing back and forth. As a result, I see that in the playback.

I should preface with stating that I don't shoot video, and as such my knowledge of the details on dSLRs when in video mode is limited.  I'm making a lot of assumptions based off my use of them as still cameras.

When shooting stills, and not in live view mode, cameras have several autofocus points, some of which are more precise and have better low light capabilities than others.  The center point is usually the best and many cameras have a center point that benefits from using a lens of 2.8 or faster.  These points can lock focus in less light than a point rated at say 5.6.  So your camera wouldn't be able to take full advantage of the 2.8 center point with the STM lens.  That said, if the camera simply can't decide which subject to use as a focus point and is flipping back and forth then having a faster center point doesn't make a difference.  Nor does it if you're using the outer points.  Of course, I think this whole conversation is moot since I believe the camera is essentially in live view mode when shooting video which means it's using a completely different AF system (contrast detection).  I just thought I'd mention it as a point of conversation.   You can always try the 24-70 and see how it performs, but to your point, the STM lenses are designed for video.

Adjusting the ISO won't affect AF performance.  So continue using the lowest ISO that you can get away with.

If I was in a situation where the camera was bouncing around AF and I didn't have external lighting, I would probably try to get the camera to set focus on my subject and then switch to manual.  Short of that, I don't think there's much you can do.

The 70D is a still camera first. Video mode is really an afterthought.

People who shoot video with a 70D generally fall into two categories.

1) Still photographers who want to shoot a little video now and then and can live with the limitations.

The best option in in difficult AF situations is to pre-focus in AF and then switch to Manual Focus before you hit the record button.

You could also try changing the focus area. I think FlexiZone-Multi might work better for you. It should avoid subjects in the background.

As in still photography, using a small aperture like f/11 and also wider focal lengths gives you more depth of field, and less chance of having something out of focus. 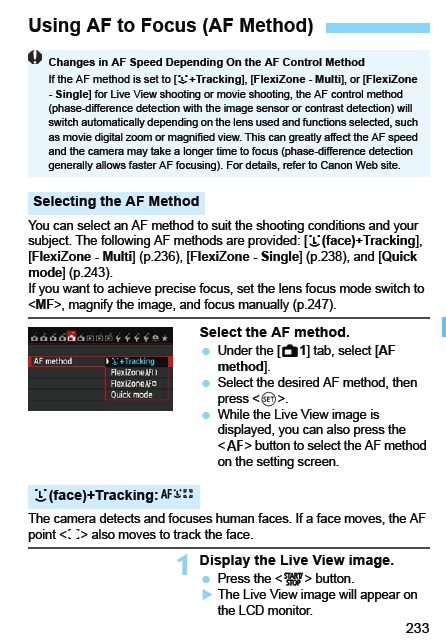 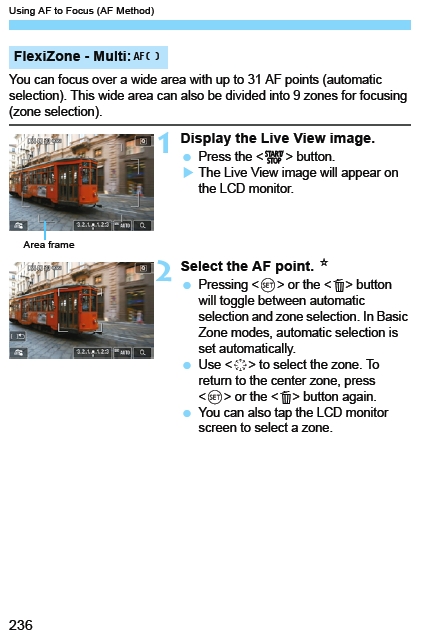 Thanks so much for the reply.  I will try your suggestions as you indicated.  It's funny that you mentioned to set the lens in AF and then switch to MF, as that was my line of thinking as well.  Since I was shooting in outside conditions, I was not totally sure whether or not the focus would hold if switching from AF to MF.

I will try to set the camera in AF and just switch to MF without adjusting it again. I do agree that in low light without external lighting (unless adjusting the ISO helps), than there's not much else I can go with (except trying to switch from the EF-S 18-135mm F3.5-5.6 IS STM lens to the EF 24-70mm Generation 2 Aperture 2.8 lens :-))