I have a Legria HV40 camcorder, which I used to access satisfactorily through a firewire port on my desktop.

In the summer the motherboard of this computer crashed and I have had to rebuild the computer installing a new motherboard, firewire card and the Windows 10 operating system. The problem is that the computer no longer recognises the camcorder. I have tried installing new drivers but so far nothing has worked. Any suggestions or help gratfully received.

Thanks VideoGeek for your reply

The Device Manager shows that the Firewire card is recognised and would appear to be working correctly. I have also tried using different firewire cables into different ports of the firewire card so it would be unlikely that they would all be faulty.

It would seem to be something to do with the cameras set up not being recognised but as far as I can see there are no drivers for the camera or updates for its operating system. Frustratingly it worked perfectly well in my old computer which I think was running Windows Vista.  I have searched the internet and others would appear to have the same problem but I have not found any solution as yet.

Have any of the camcorder settings changed since you last got it to connect properly?  What editing software are you using to try to import the footage?  The reason I ask about the settings is because according to the manual it needs to be set as follows: 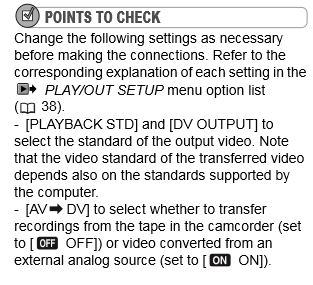 You probably have already check the settings and set the camcorder to "Play".  I'd have to run a test to see whether or not my firewire camcorders are recognized by Windows 10 since I haven't connected one since upgrading to Windows 10.

Not sure if anything here will help but it may be worth a read: