I'm looking for some suggestions on how to compensate for over exposed faces during concert photography.

I can adjust most of this in post processing, but it's better if I start with a not so over exposed face.

I was in manual mode, spot metering with a canon.

The spot is obviosuly in the middle of the frame and caught her black dress which over exposed the skin tones. I used BBF and the AF point was near the top of the frame.

Just looking for some suggestions.

This is a RAW file just to show what I'm talking about. 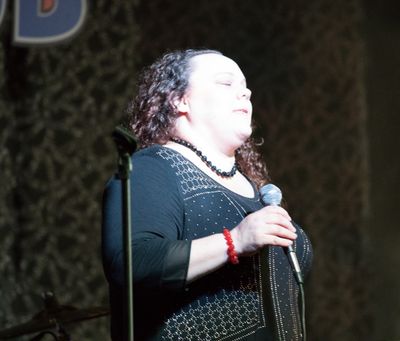 Yes it is a black dress.

It was a spot light that the performers would walk into every now and then and it would overexpose everything, like in this pic.

When they would walk out, skin tones where great.

Just another factor to think about when shooting.  Keep it on the underexposed side and you will be fine.  Use RAW of course.

Yeap, I should have been in AV mode as well... I think.

Whatever shooting mode.  Whatever metering mode. Whatever, fine. "Keep it on the underexposed side and you will be fine." This is the key.

The camera just captures the basic info. You finish it in post.  Post editing is where great photos are made.

That statement will probably make B form B spill his coffee.

By default the camera is trying to evaluate the entire frame equally to strike a balance and pull everything toward a "middle" exposure.

The "problem" with concert photography is that often the room is nearly black and the performer is brightly lit... this creates a rather extreme difference between the brightest parts and darkest parts of the image.

To YOU... the important part of the image that you want properly exposed is your subject.  But the camera doesn't know that.  So it's trying to strike a balance by keeping the black areas from being too black.  Sure it also wants to keep the bright areas from being too bright... but there's more "dark" in the image than "light" so the dark tends to win (and the smaller bright area is allowed to be over-exposed.)  Unfortunately that over-exposed area is THE area that you REALLY care about.

So you get some choices.

You can use spot metering.  On a Canon camera, spot metering means literally it uses the point in the middle of the image (not to be confused with spot focus in which you can pick your focus point... in spot metering you do not get to choose the metering point...it's always the middle of the frame.)   That means that for an image like this, (where her head is in the upper part of the frame) it's really going to meter on her "black" outfit (and that will result in over-exposure.)

You can point the camera at her face, meter, and use AE lock to lock in the exposure, then re-compose to take the shot.  This assumes the lighting isn't changing actively on you as you try to do this (becuase once you lock exposure it wont change even if the light changes.)

You can use center-weighted which will offer a more generous metering region.  However keep in mind that the key word is "WEIGHTED"... It's center WEIGHTED metering... not center ONLY metering.  It actually DOES evaluate metering across the entire frame (just like evaluative metering) but gives a strong bias toward the metering in the center third of the frame.

And sometimes I use another trick...

In the above image I used both spot metering AND I told the camera to underexposed by -4/3 (minus one and one-third stops).

I do this for two reasons...

#1... the background black, but it is supposed to actually be black (I dont' want the camera to try to show detail in the areas where it should be black)

#2 I am trying to capture the mood of the room.  The lighting was delibearately dim.  Yes, it looks dark... because it WAS dark. I knew the camera would try to make the shot look like it was taken in a nicely lit room and I didn't wan the camera to do that.

In concert photography, using either (or both) the metering modes (spot or center-weighted metering vs. evaluative metering) and "exposure compensation" settings will both be very useful.

I certainly see your point. And I have to agree that leaving the orange cast unmodified is a valid exercise of artistic judgement. But it's important to note that the way the scene is portrayed in the photograph is not the way those present would have perceived it. In such a situation, the human eye/brain system tries to rectify the overall cast of the ambient light to something approximating daylight. So while this scene would have appeared more orange than it would have if the ambient light had been a lot bluer, it would not have appeared nearly so orange as the photograph renders it.

I guess I should add that if the orange light was intermittent and/or clearly directed only at the faces, the scene probably would have appeared much more like the photograph.

I do agree that how people "perceive" a scene typically differs from reality.  However I think the perception tends to saturate more than is realistic.

For example... I've noticed (and I'm guilty of the same thing) that people will think a camera doesn't have very good "color" because they took a photo and noticed that... maybe the grass isn't very green.    I've gone back to the scene and noticed that the reality is the camera was pretty accurate.  We'd like to believe the field was full of lush green grass, but what truth is the grass may have been a bit anemic and a bit dull, perhaps even a bit yellow/brown.

Concerts can have wonky lighting, dim lighting... shooting concerts is often a struggle.  This concert was fairly easy on me as some go.  I shot one concer in which I swear they used a child's nightlight as the only light source... that was actually the 2nd dimmest...  a few years later I shot a concert in which the artist (I strongly suspect he felt is face wasn't "aging" well and just wanted to make sure nobody could actually seem him) was virtually non-existent.  From time to time strobes would flash quickly but the rest of the time there was basically no light on the stage.  It was mostly a concert in the dark.

Regardless, I try to capture something that replicates the mood and... this is fairly accurate lighting.

I agree. I tend to use daylight white balance and let the stage lighting experts do their job.