I'm having a hard time using the phase AF on the 70D. The problem is most visible when I try to focus on distant subjects with fast lenses. I need to have targets with black and white contrast, otherwise most pictures are completely out of focus, even in situations where my older Rebel T1i can focus (I did micro focus adjust each lenses).

I have several questions :

- First there is a small detail that isn't very clear in the specs regarding the high sensitivity focus point for fast lenses.

And in the datasheet it is said that :

- Second question : I measured where the sensitive AF areas are located by using my computer screen and moving a black box until I reach the limit where each AF point is able to lock focus (parallelism of the camera and screen was checked with a mirror taped on the LCD screen then removed).

In another test, I displayed a drawing of the 70D AF grid on my computer screen, I aligned it perfectly with the marks visible (with my eyes) through the viewfinder, and took a picture. I than compared it to the AF points displayed in Canon DPP.

After otherlaying each pictures in photoshop I obtained this picture : 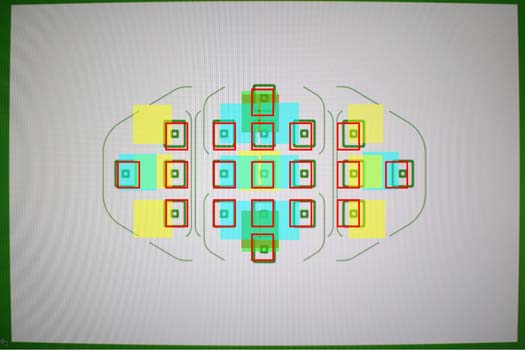 - lines in green : the AF grid drawing aligned through viewfinder

I compared it to the AF sensitive area from a 7D (image taken from this website : http://www.aerien.ch/articles/31/Canon_7d_Reglages_Photo_Nature_et_Oiseaux.php).

I understand that the AF sensitive area always extend beyond what is displayed through the viewfinder.

I also understand that there can be some misalignment of the AF grid visible through the viewfinder with the center of the CMOS, and that this misalignment doesn't affect AF performance (except when framing).

But I find it disturbing that some marks are almost completely outside the AF sensitive areas.

Is this a "feature" to compensate the lack of precision mode spot AF on the 70D, or is my camera's AF sensor completely misaligned ? If the sensor is misaligned, can this be corrected by sending it to canon or do I have to ask for a refund ?

3 people had this problem.
Me too
2 Likes
Share
Reply
2 REPLIES 2

I just posted a similar focus issue. The issues with my focus is at the wide open settings, which are my favorites. With say my 70-200L lens...those 2.8s will create beautiful blurred backgrounds I want. I get the photo I want, but the focused points are not producing tack sharp shots. Frustrating. I have deteremined it not a lens issue since I see those issue across my other lenses. Man I need to get thos figured otut. Its driving me nuts.
Brent

My first thought is this isn't a valid experiment or measurement.  There is too much tolerance between the format you are comparing.