Hello Forum, I have a question regarding the Canon EF 70-210 f4.0 I recently purchased.  This lens was manufactured in 1987 designed for 35mm cameras.  When this lens is used with APS-C sensor DSLR (30D) what wouild be the atucal adjusted focal length?  Is it an actually increase in magnificatin os just more of a cropped image?

"increase in magnificatin os just more of a cropped image"

Same difference visually. The image will be cropped, giving you the same field of view on your 30D as a 336mm lens on the 35mm film camera or a full frame digital camera and the same number of pixels per object. Using a full frame camera with the 210mm lens and cropping the image can give you the same perspective, but in that case you are losing pixels.

The focal length of a lens is a phyical property. It isn't affected by where the lens is or what it is attached to.

Thanks JR, this is my first real DLSR and I am trying to become friends with it....I love the camera so far, always been a Canon fan.  Just so I understand completely, when composing with this camera such as a wedding couple, is it recommended not to compose the picture too tight allowing room on all sides when looking through the viewfinder to prevent parts of the subject for being cropped out?

The whole crop sensor 1.6x thing is just to get 35mm film shooters familiar with the angle of view of a particular focal length a reference to what a lens will look like for APS-C. So that he knows that if he would have used a 50mm on 35mm he would need to reach for an 30mm on APS-C to get the same field of of view

I hope that is clear.

Regarding the optical viewfinder.... unless it's stated in the camera's specs/manual that coverage is 100%, you can end up incuding things near the edge of the frame.  This always annoyed me when I had both the Rebel T4i and first-generation 6D.   It's something you'll just have to practice with in order to compensate.  Or, do a tad of cropping in post.

Live view will always show you exactly what you'll capture.  And I believe that cameras with electronic viewfinders would also do the same as Live View.

What I dont quite understand is your will hear statements online that because this is an oldler (1987) EOS 35mm format lens it will work well with a "full frame DSLRs or 35mm film camera.  What makes the older EOS lenses different from the later models? Do they have different optical qualities?

"What makes the older EOS lenses different from the later models?"

The only thing you need to take away from this is, once a lens is made it can not change its focal length (FL). Doesn't mater if you put it on a 1860 Civil War Mathew Brady box camera or a modern 2020 Mirrorless Canon R5 camera.

Plus you do not crop anything. That is a misleading term. The thing that makes the image look different is the angle of view (AOV). It is a simple task to check out an AOV chart to see exactly how a specific lens FL will look on a given camera.

"Do they have different optical qualities?"

Of course they do! One would hope lens technology would be better as newer lenses come on the scene. But not the FL, it remains exactly the same and so does the AOV.

The term "crop factor" was invented to try and let people know how any FL will apparently look if you use that same lens on different cameras with different sized sensors. However, all it really accomplished was to confuse folks and at that it did a very good job.

Canon only had an APS-C (crop) lens mount availble from the Canon EOS 20D on, so all lens mounts previous to that were EF, rather than EF-S mounts, even though the sensors of some of those cameras were crop sensors.

It meant that the existing EF lenses would work on both FF and APS-C sensor bodies (as they still do).  For example the first two fully-Canon production DSLR cameras (with APS-C CMOS sensors): the Canon EOS D30 (2000) and D60 (2002), had FF mounts but APS-C sensors.  Thus, they could use only FF lenses, but the Field of View (or Angle of View) was cropped by the smaller sensor size.  Conversely an EF-S lens is not designed to go on those bodies or any EF lens mount.

I should point out that the focal lengh(s) of a lens does not change by mounting it on a crop sensor body.  It is a physical characteristic of the lens and it does not matter what body you connect a lens to.  However with a crop sensor, what it views and records from what the lens delivers is smaller - this is the Field of View (FoV or AoV), which is the result of a combination of BOTH the lens and sensor.

In the illustration below light is transmitted through a lens that remains constant (so it models a single FL).  The light delivered is constant, but the amount recorded is reduced from that of the FF sensor (shown dotted) by the crop sensor, (shown in solid shade). 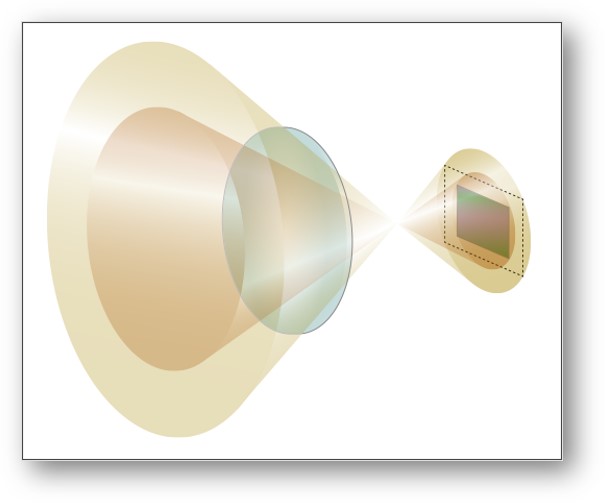 The resultant images, if shown at the same dimension give the appearance of having a magnification, but you can see that the FoV is actually reduced. 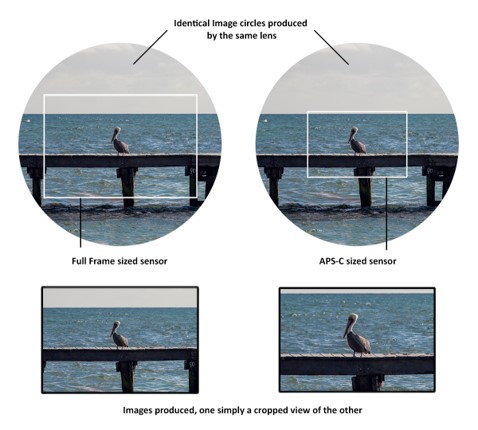 A lot of confusion exists about the issue because the documentation, and often the discussion, is couched in terms of focal length, but as I pointed out that is only one part of the story.  A much more accurate and appropriate term would be to relate to the Field of View.   In an attempt to rationalize the two metrics, it is common to talk about an Equivalent Focal Length.

An Equivalent FL tries to give an idea of what the FoV is in FL terms, taking into account the smaller sensor.

In the table below I have listed the common sensors, crop factors & coverage areas relative to a FF -

The crop factor is a factor that describes what one would have to multiply the diagonal value of a crop sensor to get to that of a FF sensor and is often called the crop multiplier.  So to get an EQUIVALENT Focal Length, one would multiply the ACTUAL focal length by the crop factor.  Thus a 100mm FL lens on a FF sensor would have an EFL of 100mm, but on a crop Canon APS-C it would seem to have a EFL of 160mm.  Again the lens hasn't changed in any way, but the resultant FoV has.

The areas given provide an idea of pixel density relative to cropping from a FF sensor to achieve the same reduced FoV.  e.g. a 100MP sensor, cropped to the same FoV as a Canon (APS-C) sensor would have its effective pixels reduced to 39MP.   It is for that reason that users of long lenses, who want the reduced FoV, prefer crop bodies because the pixel density is much higher than cropping a FF sensor with the same MP value.

That is why a lot of long lens shooters, like myself, are waiting with bated breath for a Canon EOS R7 (pro APS-C sensor) body to be produced.  If it has a 40MP sensor that would be Equivalent to cropping a FF sensor of 104MP to the same FoV, but should be much cheaper.

Also, by the way, there is a misconception that crop lenses (which don't fit FF bodies on Canon) are inferior.  They often have the same quality optics but are cheaper to produce and are lighter than their FF cousins because of the engineering of optics specific to having the back elements closer to the sensor.  Take the EF-S 17-55, awesome good lens! (Nod to Ernie!)

Before you ask us, have you looked in the manual or on the Canon Support Site?
"All the beauty of life is made up of light and shadow", Leo Tolstoy;
"Skill in photography is acquired by practice and not by purchase" Percy W. Harris
2 Likes
Share
Reply
ebiggs1
Legend
In response to Tronhard
Options