Auto-suggest helps you quickly narrow down your search results by suggesting possible matches as you type.
Showing results for
Search instead for
Do you mean
Reply
Topic Options
sarahinpaca
New Contributor

Where, oh where, is my scanner?

I just bought a Canon MG6821 printer/scanner. Although the Best Buy salesperson assured me that it "should be easy" to set it up, I spent an hour on the phone with a Geek Squad person.  He got it set up wirelessly.  I can print from my iMac (running Yosemite) and from my new iPad Pro.  Today I discovered that I cannot scan.  The computer cannot find the scanner and vice versa.  Another hour online with the Geek Squad was of NO help.  They suggest that someone come to my home.  For a brand new device!  Before I return it, any help would be appreciated.  I am a senior citizen who needs EASY directions if there is a fix. 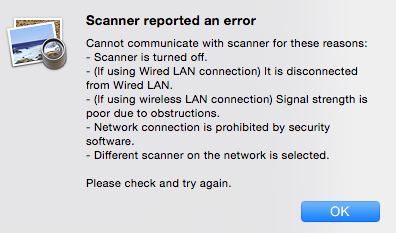 Welcome to the Canon Forums and thanks for your post!

Let's start by downloading the most up-to-date driver for the printer from our website. You can find it by clicking HERE.

Click on the 'Drivers and Downloads' tab and you'll see the Full Driver & Software Package. This should download everything you need to both print and scan.

I went through all of this AGAIN and it still PRINTS, but cannot find the scanner.  I got the same message box.  I am VERY frustrated with this product.

Please try scanning using the IJ Scan Utility.  To do this, please follow these steps:

2.  At the top, next to Product Name, please make sure that the Canon MG6800 series Network is selected.  If not, please select it from the drop down box.

3.  Place an item face down on the scanner.

4.  Click the Auto button in the IJ Scan Utility.

Are you able to scan?

If you continue to have difficulties, please contact our support group using the following link:

Did this answer your question? Please click the Accept as Solution button so that others may find the answer as well.
Report Inappropriate Content
Message 4 of 7 (7,597 Views)
Reply
0 Kudos
sarahinpaca
New Contributor

I was NOT able to scan.  I called the Tech Support number and a WONDERFUL agent named Nick had me go through a bunch of things untl he discovered that the fix was relatively simple (now, after a total of over 2.5 hours on the phone with Best Buy...).  The scanner LAN setting was for my 2G Wi-Fi network and my computer was set to the 5G network.  For some reason, the printer communicated with my iMac, but not the scanner.  Now everyone is speaking to each other!  Thank you, Nick!

Me too
Report Inappropriate Content
Message 5 of 7 (7,589 Views)
Reply
0 Kudos

Thank you for posting the solution to the issue!  I'm glad that you are able to scan again.

Did this answer your question? Please click the Accept as Solution button so that others may find the answer as well.
Report Inappropriate Content
Message 6 of 7 (7,566 Views)
Reply
0 Kudos
truerock
New Contributor

I checked my router and there was no issue with the Canon MG3620 printer being on the network... obviously, because everything had no problem printing to it.

Windows 10 Paint could not see the MG3620 scanner (but, it could see the printer).

Windows 10 Fax & Scan could print - but, could not see the scanner.

I tried turning the Canon MG3620 off and then turning it back on.  That did not change anything.

I wish I had thought to unplug the Canon MG3620 power-cord and then plugging it back in to see if that fixed the problem.  If I see this happen again (it happens about 4 times per year)

What finaly fixed the problem was the old "re-boot the PC".  So, I'm thinking it is a Windows 10 problem and not necessarily a Canon problem.

I only use drivers from Microsoft.  For Windows 10 that is a 32-bit driver from 2006 that uses ksthunk.sys.  That is probably the problem.  I'm not sure why Microsoft is not using  a current 64-bit driver to support Canon MG3620.  I assume because that is what works best with Canons firmware?

Nothing looks odd on the MC3620 Network Configuration print-out.  Sometimes the channel changes from 10 to 11 - which is weird.

I'll guess that it is the old 2006 32-bit driver that stops working for some random unknown reason.