Auto-suggest helps you quickly narrow down your search results by suggesting possible matches as you type.
Showing results for
Search instead for
Do you mean
Reply
Topic Options
Highlighted
dakejohnson
New Contributor

Very happy this beta was released so I can use my Canon as a Webcam, thanks for making it happen. I would like to see improvements when the non-beta is released. Getting it to work with Quicktime and the native version of Zoom is on top of the list. There are functions on the native version of Zoom that are not available on the web version that make this required if Canon is going to be a viable option as a Webcam.

Details of setup: Late 2013 iMac, Catalina 10.15.6 paired with an EOS RP over a USBA to USBC cable. I also have a new iMac to compare it to but so far the only difference is charge capablity. I quess there is no way to get USBA to charge the EOS RP? I even tried a Apple USBC/HDMI/USBC hub to USBC. Input was USB3 from the iMac and USBC from a charger, output was USBC to the EOS RP. This did not work.

Could not get Quicktime to work, it would only show the black EOS WEBCAM UTILITY BETA screen. It was not clear from reading this forum if anyone has been successful getting Quicktime to work. Please let me know if you have or if Quicktime with EOS is supported some other way.

I was able to get Webex Zoom running but it seems to be very random on what it takes to get video to start. This was true for my Late 2013 iMac and my new iMac. Video will not start immediately even if you wait but you can get it to start by turning Zoom Video on/off multiple times but you really don't kmow how long this will take. I have tried starting/quiting Utility 3 before zoom but that had no effect.This makes getting to meetings on time difficult.

There is also a noticable difference in video lagtime between the iMAC bulit in facetime camera and using the EOS RP. It is enough lag with this Utility that it think the audio/video sync will be noticable. For the iMac, the facetime camera is on the same USB network as the USB used by the EOS RP so I am not sure where this lag comes from. Interface speed does not seem to matter since the lag is the same between old and new iMacs. Wondering if anyone else has noticed this lag?

My 2013 iMac has USB3, which is what I got working with Zoom. I did try this iMacs Thunderbolt interface with an Apple Thunderbolt to USC-C adaptor before I found speed did not matter for the latency. Both the EOS Utility 3 and EOS Webcam Utility would not reconize Thunderbolt on my late 2013 iMac.

If anyone has Quicktime working with EOS or has the steps make the video start more reliable on Zoom, I would like to hear about it.  Also if the video lag can be impacted by changing settings on the Camera.

@mherzogny wrote:
Ah, I see what you mean. I use multiple sources all the time and sync using the clap method, but never really considered the problem of syncing the audio and video of my zoom meetings. I guess I just assumed zoom would do a good job, but that’s probably a bad assumption

I have been using Zoom with Guitar and voice Mic through an Audio interface to perform over Zoom with groups of musicians (one at a time). With the right Zoom settings (original audio) and decent bandwidth the sound/video is pretty good. No issue with sync of the audio with the Facetime camera on a iMAC or an external webcam on a PC when using the audio interface. But the delay introduced when using EOS Webcam Utility does cause enought delay that voice/video (with the same setup) has a noticable lag. Not sure why since the speed of the connection does not seem to matter, USB C vs USB A.

When I download and run the installer pkg, the software fails to install correctly. It installs a folder within my 'Applications' folder, but fails to actually install the actual app.

These are the specs for my Laptop: 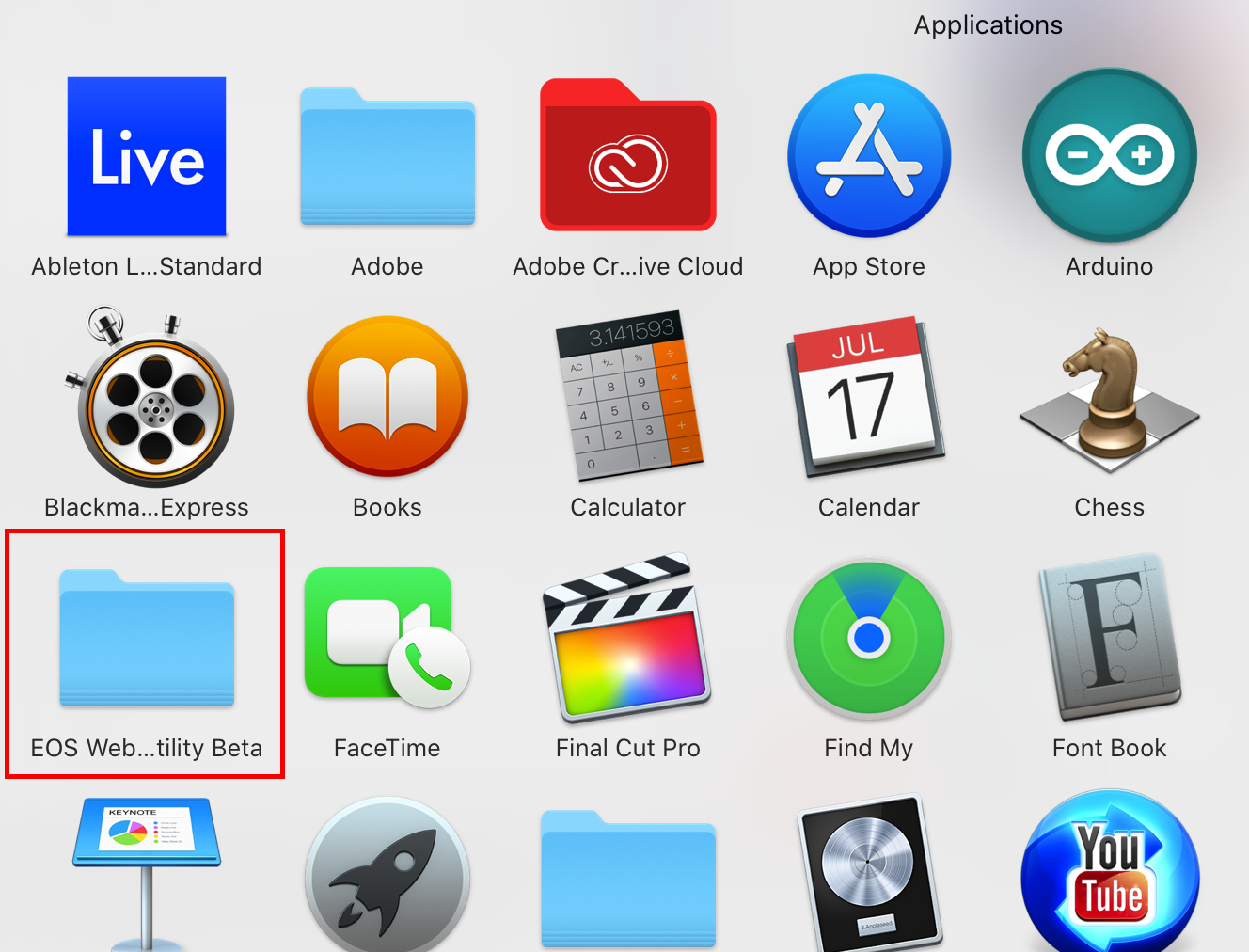 Re: macOS Catalina - Web Utility Does Not Install Correctly

There is no app.  It's a driver.  To test what I suggest id opening up quicktime player, start a movie (i think) select the canon driver and away you go.

YOu can maybe use it with Zoom online or earlier versions of skype.

Re: macOS Catalina - Web Utility Does Not Install Correctly

However, It's frustrating to me (being a Mac-only user) that they used the term 'Software' to describe what I was installing. Hey, Canon, pls use the term 'Driver' OR truly release a toolbar application. Add features such as Stop & Start capture...etc.

Any Idea when it will bie aviable for MacOS Big Sur ?

I driveing the Developer Beta, because i need support Full resulation of 5120x1440 of my Display... wich is not possible with Cataline

But the Software seems not working. I use an EOS 6D (wich Youtuber say should work), but Camera is not regnorized as Webcam

I had this installed on my Mac and used it with Teams and it was working pretty well for a few months.   All of a sudden my Mac doesn't recognize my camera at all.   I don't see the EOS utility option at all in Teams and in Quicktime I see the option but it doesn't recognize the camera.    I try the google web cam utility too and I see the option in settings, I select it but can't get the camera to pull up.  I do not have the Canon Utilities installed.

Does anyone know about any compatibility issues with this combination or a fix?

I'm using a Rebel T6 with the beta driver EOSWebcamUtilityBeta-MAC0.9.0.pkg  - I'm on 10.15.6 Catalina and cannot access my camera connected via USB on desktop apps - Zoom, Teams, Monosnap for screen recording. I then found the software description page that for those apps I may have to use the chrome/web version not desktop app. Sad.

For some reason, the utility camera seems to be freezing my Zoom/Teams on open now because I had set the utility as my default camera. Now I can't access those desktop apps. May have to re-install them. If I don't respond back, that fixed it.

It used to work on the Teams app but not Zoom app. I don't think that should freeze your apps. I hear that if by default your utility app uses the camera it won't share the resource to the webcam utility.
Report Inappropriate Content
Message 399 of 467 (1,033 Views)
Reply
0 Kudos
Highlighted
MarkWmsOnFire
Occasional Contributor

I'm using a Rebel T6 with the beta driver EOSWebcamUtilityBeta-MAC0.9.0.pkg  - I'm on 10.15.6 Catalina and cannot access my camera connected via USB on desktop apps - Zoom, Teams, Monosnap for screen recording. I then found the software description page that for those apps I may have to use the chrome/web version not desktop app. Sad.

For some reason, the utility camera seems to be freezing my Zoom/Teams on open now because I had set the utility as my default camera. Now I can't access those desktop apps. May have to re-install them. If I don't respond back, that fixed it.

Then it won't be set as your default camera in those apps, and you can get them working again. You can then reinstall and start over on working with the Utility Beta.