Auto-suggest helps you quickly narrow down your search results by suggesting possible matches as you type.
Showing results for
Search instead for
Do you mean
Reply
Topic Options
AuntFrahn
Frequent Contributor

Yesterday was the big test for my new PowerShot SX60 HS. Yes, I know it's apparently a 2014 model.

The results at a music festival two weekends ago were good. Beautiful sunny days.

The same at the arboretum on Thanksgiving day.

But, yesterday for the event I wait for each year, the Junior Rodeo, it was overcast.

The parade shots at 10:00 AM were better than the rodeo shots as the clouds were somewhat darker after noontime at the arena.

No matter what I tried, the photos were grainy.

For comparison, I used AUTO. Then tried different settings as practice since I knew I could go again today.

When I pressed the shutter half way, by 4:30 PM I had to keep fiddling with different settings until it looked bright enough. I had to have a high ISO to see anything. Then, I used the flash not expecting much because I am so far away being outside of the fence. Miserable results.

I knew I'd need a fast shutter speed and planned on at least 1/500.

Waddizzle
Esteemed Contributor
Viewing the photos on my Mac with iPhoto, the photos of the parade looked OK - not great. But, when I zoomed in to see how sharp the faces were, not good.
Then two hours later at the rodeo arena, I was truly disappointed with action shots.
I have a couple of shots of bulls as they were lying down. Those were OK even as I zoomed in iPhoto. No motion there.
If I cannot even get a decent shot in AUTO, then what is the best procedure for shooting realy fast action on a cloudy day? Cannot use a tripod, because the action is everywhere and so fast.
I got some really good action shots and was able to get three to the one I could get on other cameras. The download speed to the camera must be pretty good. But, again, they are all grainy.
I found this article last night:
https://www.dpreview.com/forums/thread/3814957
Looking a little cloudy right now, but looks like the sun will come out by noon.
Little guy: ISO 400 f/5.6 100.23mm 1/160
I was going to upload a file, but they are 6.5MB and I don't have time right now to downsize it.
Me too
Report Inappropriate Content
Message 1 of 4 (3,299 Views)
Reply
0 Kudos
ScottyP
Respected Contributor

This is hard to diagnose without a photo example to look at.

Graininess, and also poor detail when zoomed in are symptoms of shots taken at ISO levels beyond the camera's particular ability to handle high ISO. The higher the ISO the more grain and noise, and the less resolution detail in the image. The fact that it is worse in less light tends to support this guess.  The small sensor of a powershot will not do as well at higher ISO as a camera with a larger sensor.

Avoid cropping. Blowing up the picture makes any deficits in resolution more glaring. Try to get as close as you can and then try to frame tightly in camera so you don't have to crop/blow up your image.

On less than sunny days, use as slow a shutter as possible without getting motion blur. If you can get a blur free shot at one four hundredth of a second, don't shoot at one thousandth of a second. It robs you of light and that makes the camera raise the ISO even more.

Get as as close as possible instead of relying on the superzoom to bring the action to you. The lens has a variable aperture. The lens stops down more and more as you zoom in. Stoping down is pinching the lens opening smaller, letting in less light, which makes the camera raise ISO.  It may also make the camera speed up the shutter to combat blur, but the faster shutter also diminishes the light getting into the camera, and forces it to raise ISO.

Thanks for you response.

I did try among numerous settings, ISO 100, which is just where I wanted it. Lousy results.

Yes, I surely noticed the cropping effect, but have had better luck in previous years with a couple of Olympus and a couple of Kodak camers. I have never until now tried anything except AUTO. I got some beauties other years, but did notice cloudy days weren't so special.

Looking at the EXIF I see one series of five shots from yesterday which had to be on AUTO or I was using Av f/5.6

All at 95.33mm I certainly zoomed in to get him coming out of the chute across the arena. Total of 8 seconds. I like that part.

Each of these were grainy - not super grainy. Funny, most of the animals don't look so grainy, but people faces sure do.

[Get as as close as possible instead of relying on the superzoom to bring the action to you. The lens has a variable aperture. The lens stops down more and more as you zoom in. Stoping down is pinching the lens opening smaller, letting in less light, which makes the camera raise ISO.  It may also make the camera speed up the shutter to combat blur, but the faster shutter also diminishes the light getting into the camera, and forces it to raise ISO. ]

Being at the rodeo means the closest I can get is at the fence, but I am not tall enough to see over the fencing/railing and have actually shot between the rails. To get height, I get to the top of the stands and stand on the top row. Now I'm about 20 feet further away. That's why I love the great zoom capability of cameras.

I zoom in as close as I can, but those horses are flying by coming at different angles. You never know which way the calves will turn with the team ropers chasing after them. Exciting.

The sun is coming through now with high thin clouds, so I will be heading over in an hour or so. It's just about five minutes away. I bring my iPad and can download to it when there is a break in the action.

My first shots will be on AUTO to see what it will do for me. Not expecting a lot now that you mentioned the zoom effect.

I might try some without any zoom at all and see what I can see after downloading. Maybe cropping then wouldn't be so bad.

Thanks so much for you input....especial about the pinching. Rats!!! I really like to zoom in.

I went back Sunday when it was less cloudy. ...mostly in and out.

By the time they got to the steer and bull riding which I really wanted to get some pictures of, it was getting windier and cloudier with the exception of the chutes across from where I could get a view of those two events

Throughout that time the sun was shining from behind me onto the chutes across the arena.

Yes, sunlight is the key.

Here are four examples of what I was able to get: 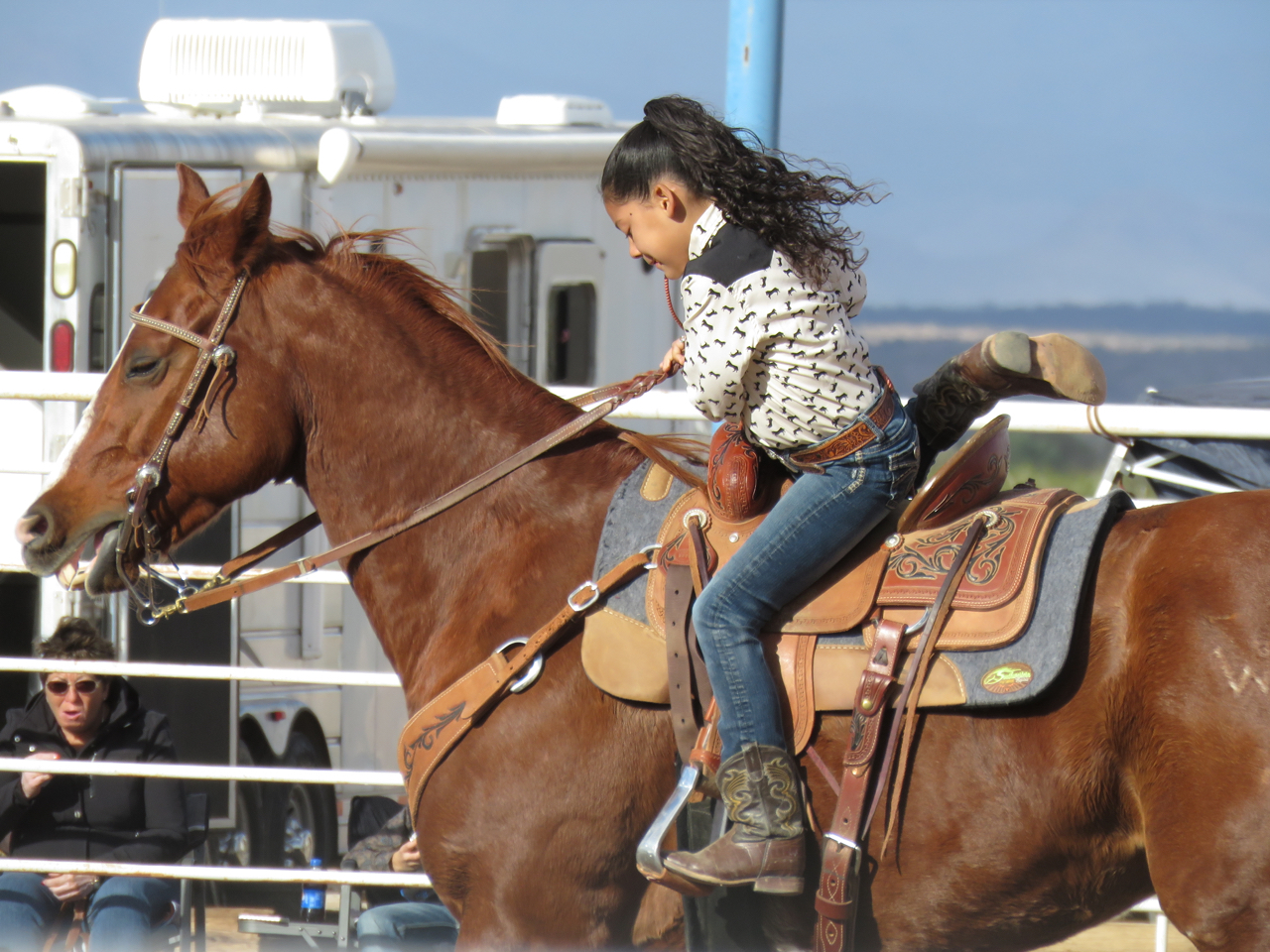 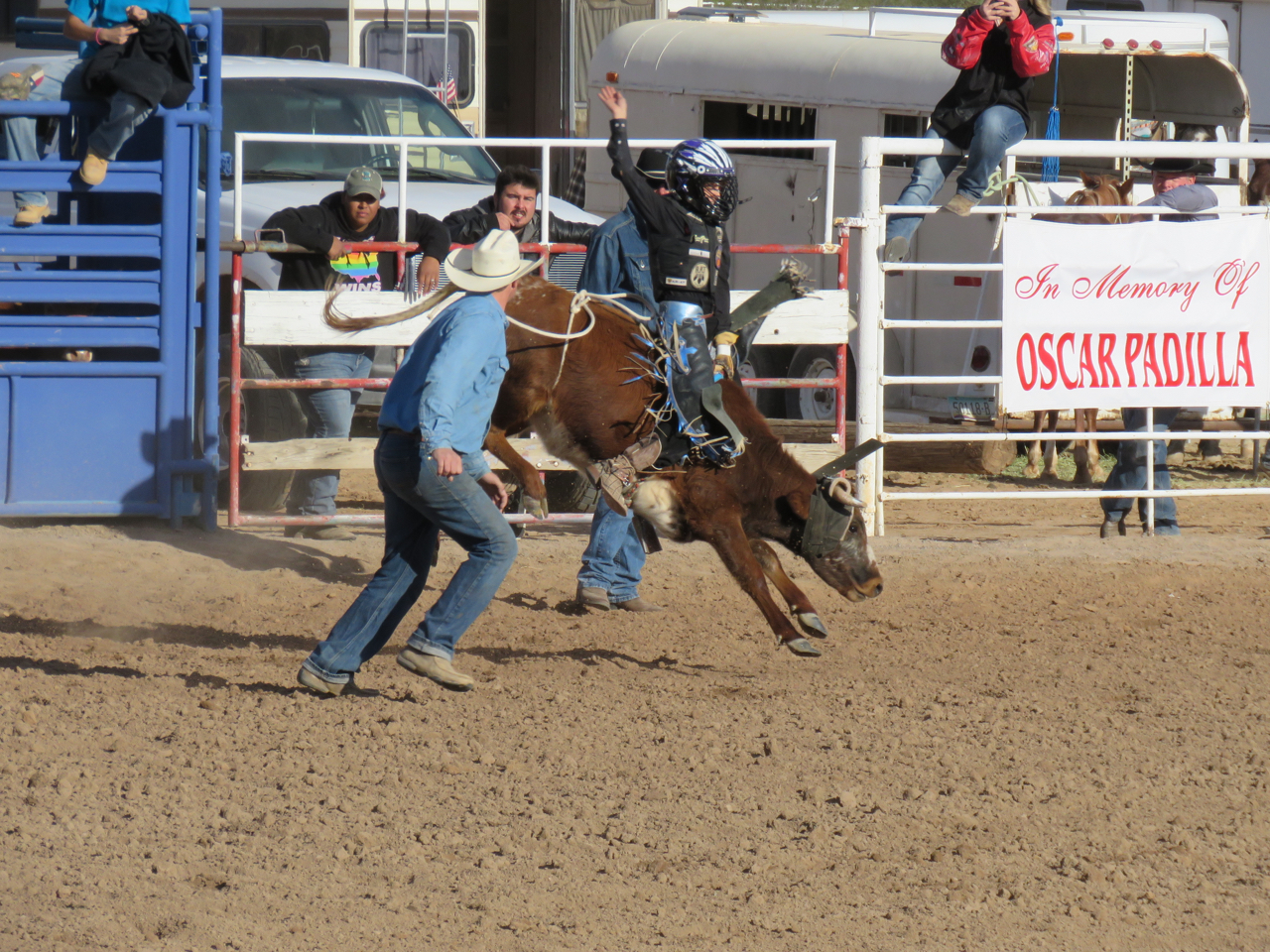 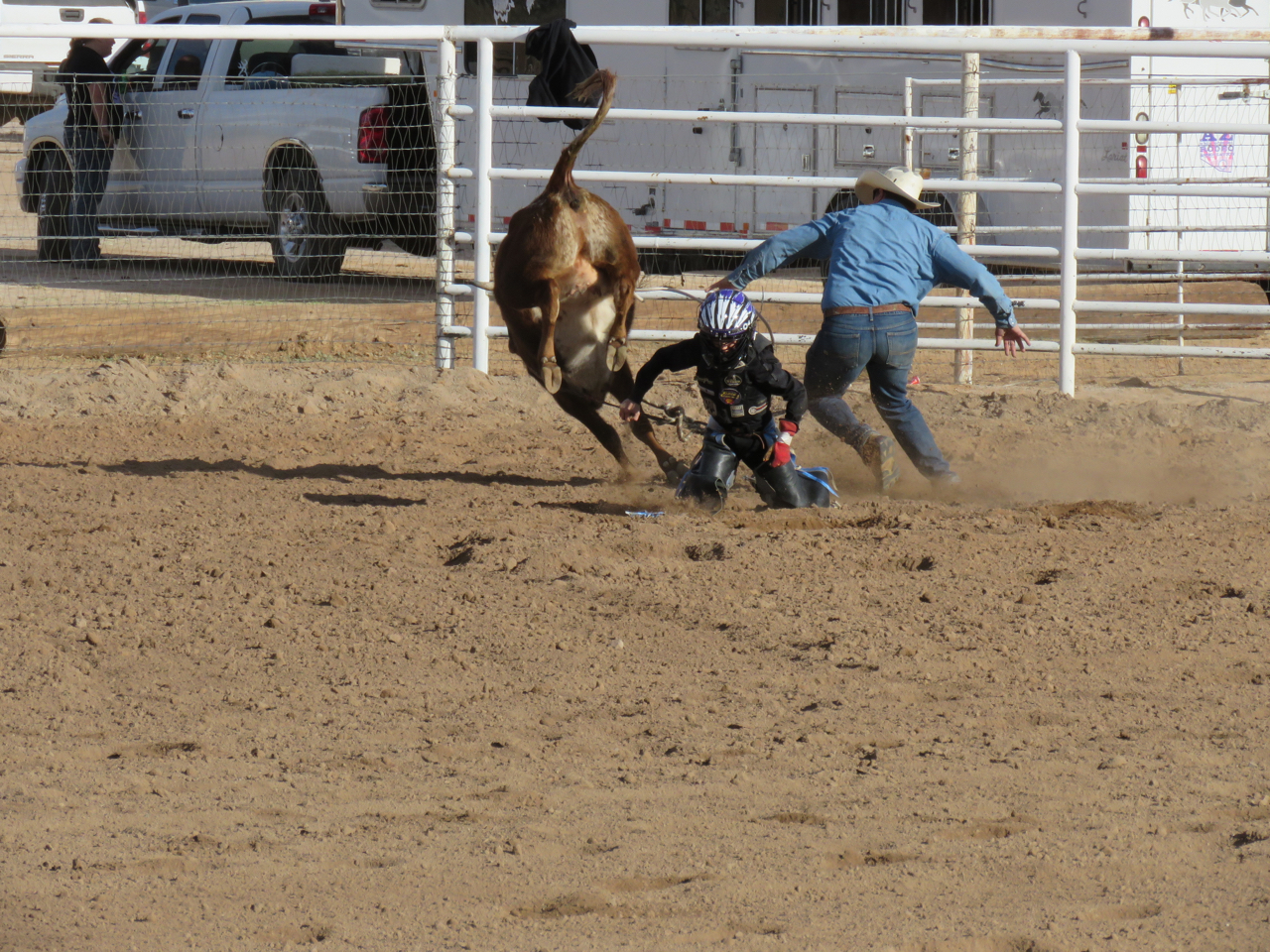 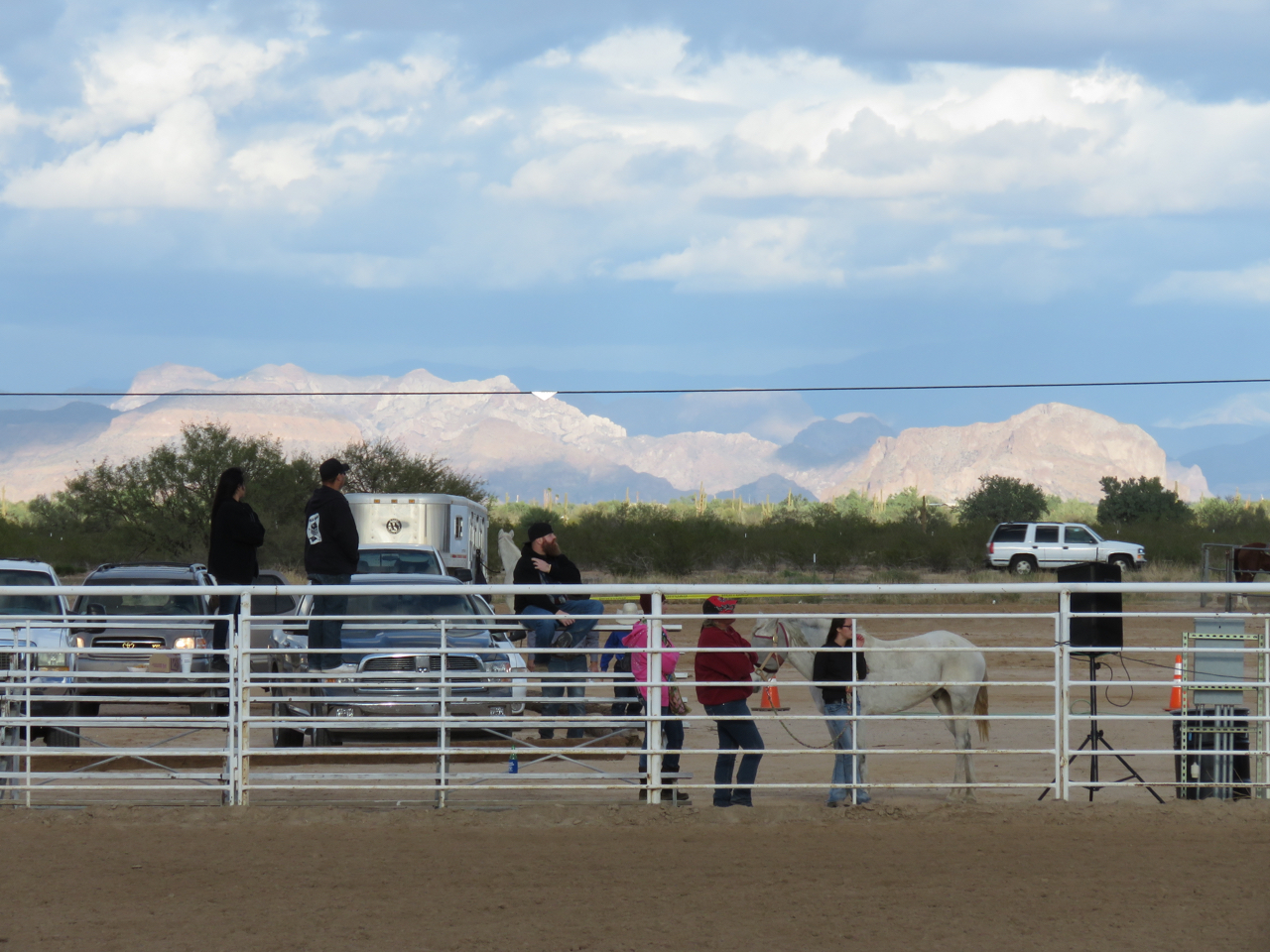