It says the lens has AF Macro on the side which leads me to believe it's an EOS mount lens BUT I may be wrong. There are so many re branded lenses it's tough to know exaactly what it is.

"A skill is developed through constant practice with a passion to improve, not bought."
Report Inappropriate Content
Message 11 of 16 (2,250 Views)
Reply
0 Kudos
okobojichick
New Contributor

Photo of lens-only a tiny plastic edge is above the contacts - a very tiny amount above.

My lens looks like the one on the right with the contacts but in addition it has a red dot.  Nothing protrudes beyond the conacts except a small plastic ridge that is right next to the contacts which is just the tiniest bit above the contacts. 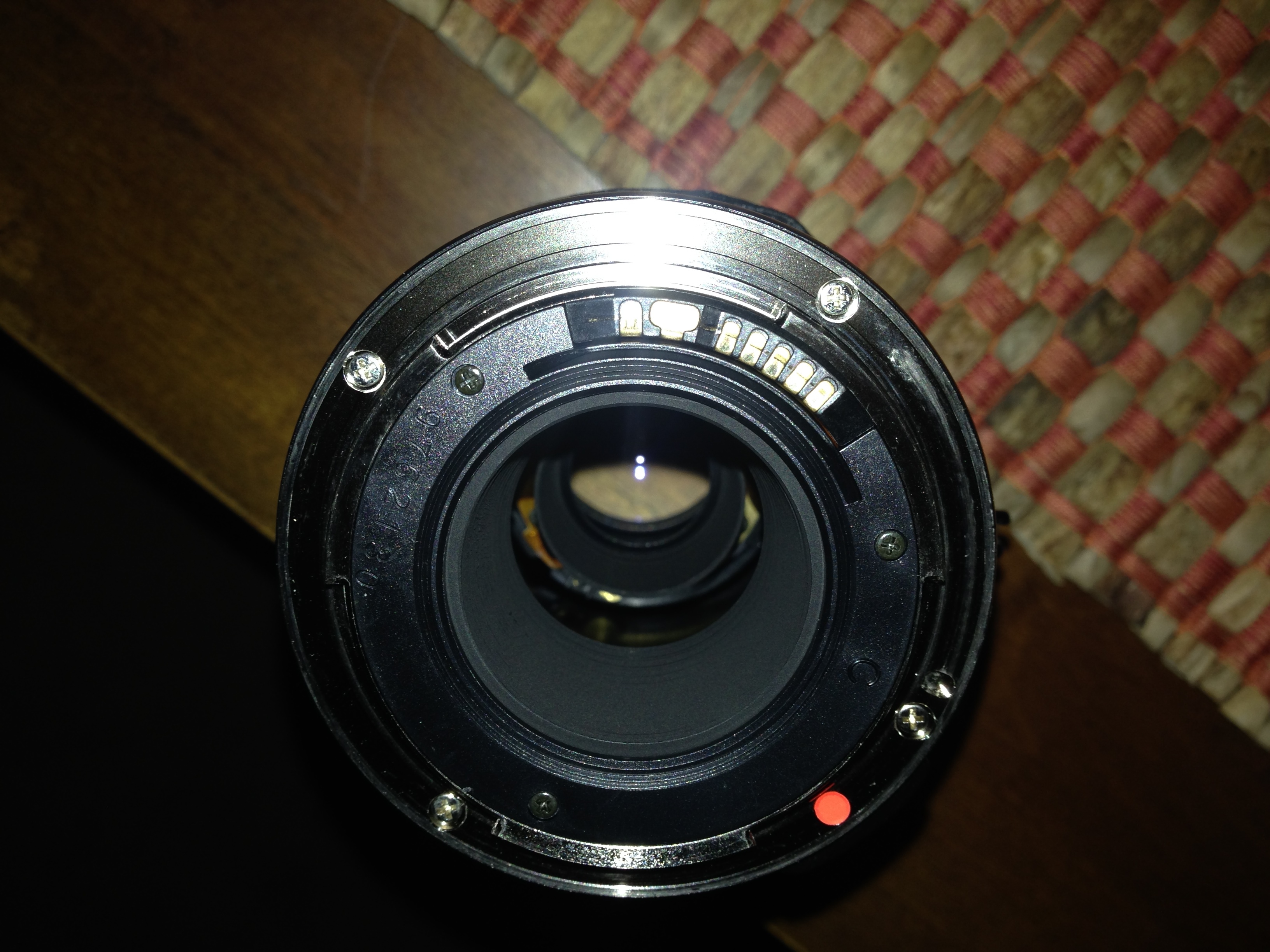 That's definitely EOS mount.  That very thin plastic lip is normal -- all EOS lenses have it and yes, it does just fractionally stick up a tiny bit higher than the gold contacts -- but if you were to compare it to an EF-S lens you'd notice that part of the lens protrudes well beyond.

The lens will mount to the camera body, but the question remains of how compatible it will be with current EOS bodies.  As previously mentioned, Canon does not publish this spec to 3rd parties -- the 3rd party has to reverse engineer it.  From time to time, I'll encounter a story of someone who bought a 3rd party lens which worked with the camera they were using at the time... but when they upgrade to a new model body, suddenly they discover their 3rd party lens doesn't work, but their old Canon lenses do.

Considering the fact it doesn't have any parts which could be hit by the mirror & that you own it already I see no logical reason not to try it on the new body. I've never heard of damage being caused by a lens that needed re chipping, only that they didn't function in one way or another & that's almost always in the AF.

"A skill is developed through constant practice with a passion to improve, not bought."
Report Inappropriate Content
Message 14 of 16 (2,239 Views)
Reply
1 Kudo
ebiggs1
VIP

Although, I successfully converted my FD 135mm f2 L, to EF, I see no practicable use for it. Simply as an exercise to see if it is possible. In reality it offers no advantage over the current EF lenses that replaced it. Plus is has many disadvantages.

No auto focus, no auto aperture control and it does not report any useful data to the EXIF info for a few.

So, one must ask why? The effort and the results may not be equal.

That lens will likely work just fine on your DSLR. As mentioned above, some older 3rd party lenses such as this are not compatible with more recent cameras. I have never seen a Canon EF lens of any age that wasn't compatible with any generation of camera (except for EF-S being limited to APS-C models beginning with the first Digital Rebel/300D and later). If the electronics aren't compatible, it will merely cause an error code in the camera and you'll just need to remove the lens from the camera, turn off the camera and remove the battery. Then reinsert the battery and your camera should be fine.

Promasters are simply fairly inexpensive lenses, usually made by Cosina. They sometimes sll under other brand names, such as Phoenix and Vivitar. They've been around for , originally offered as manual focus lenses. That one is definitely a modern AF version and the mount is clearly Canon EF. The lens is designed for use on full frame/film cameras, so will work fine on crop sensor Canon DSLRs, too.

It's very unusual for a telephoto lens to protrude to the rear and potentially interfere with any camera's mirror (and quite obvious from the photos that this isn't a concern with this particular lens). Mirror interference can be a problem with retro-focus design ultrawides and fisheye lenses especially, but very rarely is with any lens of 35mm or longer focal length. In particular, you don't have any need to be concernd of this being a problem on an APS-C camera such as your digital Rebel. The smaller mirror in that camera will clear almost any lens, even most retro-focus designs.