Auto-suggest helps you quickly narrow down your search results by suggesting possible matches as you type.
Showing results for
Search instead for
Do you mean
Reply
Topic Options
EddM
Occasional Contributor

New to the Community.

I would like to do wildlife/bird and othe longer distance photography with a 500mm plus lens.

I am a hobbyist/amateur and really cannot afford the pricey Canon lens in that 500mm range.

Am I better of to buy something like a:

Buy an inexpensive manual focus only 500mm like the:

I know you get what you pay for and all but would appreciate feedback, thoughts, recommendations.

Birding is tough on a budget.

The "cheap" lenses that birders love are

2) the Tamron 150-600mm ... note that there's the original which is a little less than $900 (and just a few dollars less than the Sigma) but Tamron also somewhat recently released the "G2" version which I think runs around $1400.

And these are the "cheap" lenses (because the lenses they really prefer are $2000 and up.  So the definition of "cheap" is all relative.)

Do you have to use these lenses?  Certainly not.  Birding isn't easy... but these lenses make it a little easier.   If you're trying to capture birds in flight, you need a lens that is responsive - snappy auto-focus and capable of auto-aperture changes.   If you can find a non-moving bird, things are easier.  But many birds are shy and it's difficult to get close enough for a well-framed shot before they fly off.

Lenses like those 500mm f/8 lenses are mirror lenses (catadioptric lenses).  There are no aperture blades so exposure can only be adjusted via shutter speed (or ISO).  Out-of focus blur is donut-shaped because the lens has a secondary mirror which creates a central obstruction.  They are not auto-focusing lenses.

Trying to capture a shy create or a bird in flight with such a lens will be... quite a challenge (to put it mildly).

Extenders (focal length multipliers) cannot be used with just any lens.  Canon has a specific list of lenses that are compatible with their 1.4x and 2.x extenders.  They not only alter the focal length of the lens, they also affect the focal ratio of the lens.

If you use the 75-300mm lens (at the 300mm end - which is basically where you'll be) the lowest focal ratio is f/5.6.  When you use a 1.4x extender you multiply BOTH the focal length AND the focal ratio by 1.4.  This gives you an effective 420mm f/8 lens.  Your camera will NOT have working auto-focus at f/8 (only a few cameras can auto-focus at f/8 and they're all high-end models.)  Even so... auto-focus speed is reduced with the extender.  And a 2x adapter doubles things... so the lens effectively becomes a 600mm f/11 lens (and there are zero cameras on the market that have working auto-focus at f/11).

You also take a hit in image quality when you use a focal length multiplier.  Canon's latest version "III" extenders are extremely good.  Third party extenders like the Kenko brand will result in quite a bit of a noticeable hit in image quality.  But that assumes the lens is even compatible with a focal length multiplier AND that the camera can still have working auto-focus at the new max aperture value available with the multiplier on the lens.

You may be able to stretch the budget by looking for used lenses (hopefully in good shape).

The tele-extender isn't going to work for the 75-300mm lens.  The mirror-lenses you mentioned will "work" but probably frustrate you.  With that said... there's a nearby nature park that is a natural aviary for blue herons and sandhill cranes.  Sandhill cranes are normally so shy that if if you spot them on the far end of a large field, by the time you step onto the field, they're gone... they're not sticking around to see if you're planning to get within 100 yards of them.  But at this particular aviary, they were shockingly used to humans.  I watched a mated pair wandering around foraging for food with their chicks ... and the chicks were walking up to people ... (literally within 2-3' and in one case I saw a chick go right up to an adults shoes (I think he may have been eyeing the laces in hopes that they were worms.))    That's "not" typical behavior.  I had to ditch my 300mm lens for a 70-200mm. 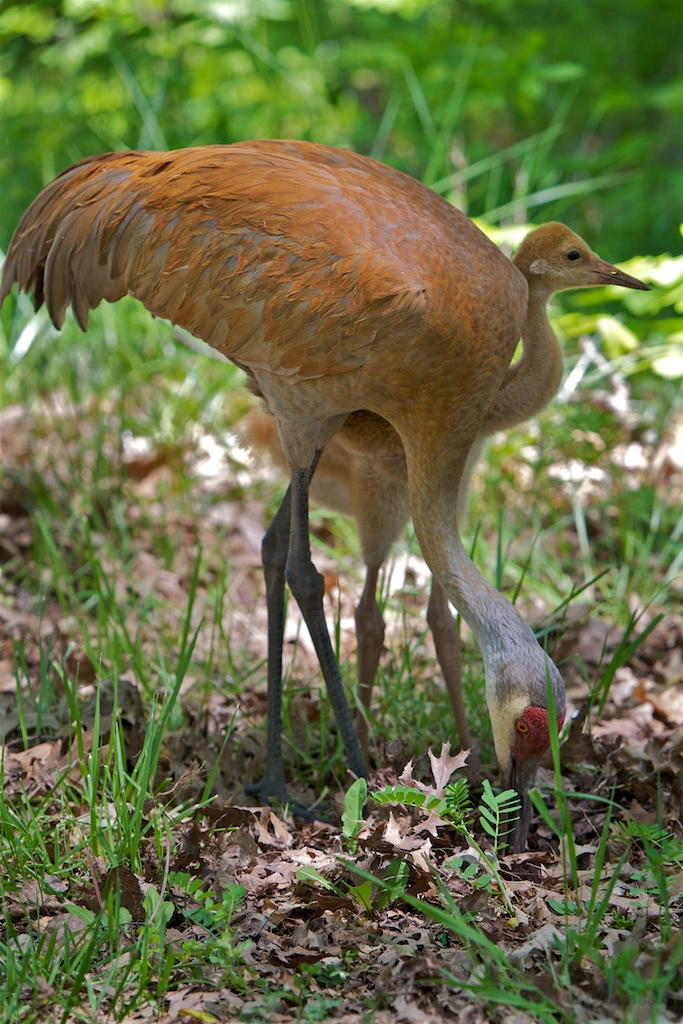 I think this was shot at 140mm (and I cropped in very gently to improve composition).

So it's certainly possible to do bird photography with any lens (the above shot was not exactly challenging -- it was the proverbial "fish in a barrel" situation).  But for most bird photography, birders prefer the native 150-600mm zoom range and the cost of the entry-priced lenses in that category are around $900 (but that's retail price on a "new" lens.   You may be able to find a well-mainted used lens for much less.  Especially as owners sell off their old/original versions to buy new/improved versions.

Forget the Canon t-cons.  They won't work with what (the lenses) you have. Kenko t-cons might, I don't know for sure but I can say it probably isn't a good idea anyway.

These are actually pretty decent lenses.  Actually they are all the same lens just rebranded with whatever name anybody puts on them. The big problem is they are totally manual.  You will do everything. Challenging to focus. So, if that doesn't bother you, go for it.  It is the cheapest way to go.

New to the Community.

Forget using a teleextender with that camera body.  The AF sensor lacks the sensitivity to work your EF 75-300mm over its' full zoom range when it is used with an extender.  It will work with the 1.4x at 75mm, and not much more focal length.  Your camera body will not AF at all with a 2.0x extender.

You don't want to buy an extender only to use it at just the short end of your zoom lens, or forcing yourself to manual focus.  So, save your money and forget about an extender.  As noted above, they work best with premium camera bodies that have sensitive AF sensors that can focus at narrow apertures, like f/8.

Birding can be an expensive hobby.  It begins with a high quality super telephoto lens, which means a focal length greater than 300mm.  Using a high performance camera body is a huge advantage.  More AF points translates into better AF tracking of moving subjects. Having an image sensor capable of high ISO settings translates into faster shutter speeds, which is crucial for getting sharp photos of quickly moving subjects.

None of that comes cheap, but it doesn't have to be expensive.  While Canon doesn't currently offer a lens in the niche that you are looking for, you may want to look at the new Sigma 100-400mm lens.  It has much better image quality than your 75-300mm, and it focuses much faster, too.

If you wish to learn more about exposure, and how different settings can impact the end result, invest in a fast lens with a wide aperture, like the EF 50mm f/1.8 STM lens.  This will give you the opportunity to explore faster shutter speeds and wide apertures.  The cost of the lens is well worth the cost, which is less than most photography classes.

"Doctor told me to get out and walk, so I bought a Canon."
Report Inappropriate Content
Message 4 of 24 (5,883 Views)
Reply
0 Kudos
EddM
Occasional Contributor

Want to thank everyone for the input and advice.

DSLR is new to me as I shot 35mm film in the past and got away from it.

The teleconvertors are obviously out.

Will look at some of the recommended other lens.

Might still think about the non-mirror 500mm manual focus as that doesn't bother me as I shot a lot of 35mm film manual for years.

As I look at some things might reach out again for input.

It isn't the same as it was on a 35mm camera.  They were designed for manual focus.  Current DSLR's like your Rebel T6 is not.  This makes it more of a challenge to get pin point focus.  That said, it can be done.  It is possible.

Thanks again, learning more as I go.

Want to thank everyone for the input and advice.

DSLR is new to me as I shot 35mm film in the past and got away from it.

The teleconvertors are obviously out.

Will look at some of the recommended other lens.

Might still think about the non-mirror 500mm manual focus as that doesn't bother me as I shot a lot of 35mm film manual for years.

As I look at some things might reach out again for input.

If you're looking at one of the 500mm lenses, that is long like a telescope, then be advised that the tripod foot on most of them is not very stable.  There is too much wobble and play, even after you lock it down, because of the high moment of inertia caused by the camera body being so far away from the center of the tripod.

Without a very robust tripod, the off-center load will quickly destabilize your average tripod/head combo.  And, with 500mm on an APS-C sensor, you are going to need some type of support.

"Doctor told me to get out and walk, so I bought a Canon."
Report Inappropriate Content
Message 8 of 24 (5,819 Views)
Reply
0 Kudos
EddM
Occasional Contributor

Thanks for the input. Not sure I am going to go with one of those 500mm manual focus.

I do have a fairly robust tripod with a 20lb capacity rating so should be good if I go that route.

Thanks for the input. Not sure I am going to go with one of those 500mm manual focus.

I do have a fairly robust tripod with a 20lb capacity rating so should be good if I go that route.

Want to test how stable your tripod and head really are?  Use your 75-300mm lens, and try focusing on the Moon in Live View.  You will need to switch the lens AF/MF switch to MF.  You will also need to use the 10x magnify mode in Live View.

If you are using a ball head, then your first problem is going to be pointing at the Moon.  Ignoring the fact that the Moon is constantly moving out of the frame, you can expect the camera/lens combo to shift slightly as you tighten ball head.  This shift, or backlash, only gets worse with longer, heavier lenses.

Once you get the camera locked in place, with the Moon in the frame, try turning the focus ring.  If your view of the Moon suddenly turns into what looks like an earthquake, which makes it difficult to impossible to focus, then this is not uncommon.  The longer the focal length of the lens, the worse the earthquake.

Using a heavy telephoto lens, and then pointing it upwards towards the Moon, presents a significant load that is not centered above the CoG of either the tripod legs, or the tripod head.  Leveling the camera/lens, and aiming at the horizon, significantly reduces the problems you may have observed while pointed upwards, above 45 degrees, at the Moon.