Auto-suggest helps you quickly narrow down your search results by suggesting possible matches as you type.
Showing results for
Search instead for
Do you mean
Reply
Topic Options
hoosierdaddy
Occasional Contributor

Scott, Thanks for your suggestion on the 7D, it seems everyone feels that's the way for me to start out. Thanks for the 70-200 & 17-55 lens recommendations.
Report Inappropriate Content
Message 11 of 19 (3,023 Views)
Reply
0 Kudos
ScottyP
Respected Contributor

My buddy had one of those Honda coupes and I drove it. Very nice.  I hear they are going to start making it again.

TT your sample is good but in general we try to show some motion blur in Motorsports with a few exceptions. The one venue where freezing everything in the frame seems to be standard practice is Motocross. There's usually lots of stuff in the frame to imply speed but when it's cars racing around the track & you're shooting from the side freezing the frame changes what we percieve is going on. This first sample shows a Mustang parked on the track but in actual fact it's at full speed. I was using a very high shutter speed testing camera / lenses AF systems for vintage races the following week. I wanted to know which combos could track the cars at full speed & believe it or not even the original Sigma 18-200 did fine. 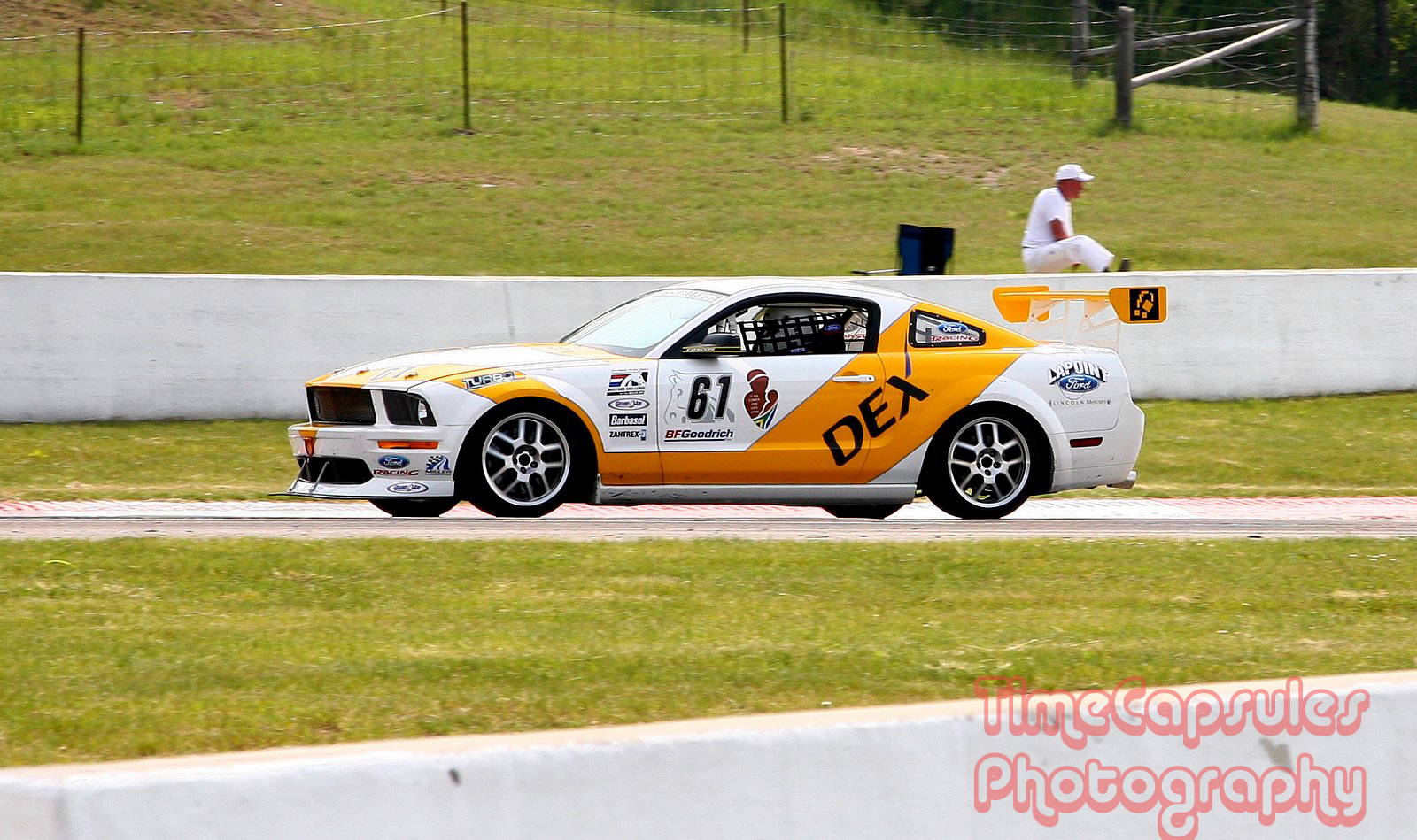 These are what are considered correct for the venue, background, wheels & tires blurred but the car & driver in focus. Finding the right shutter speed range determines just how much background blur & too slow along with a busy background can result in a shot that draws your eye away from the subject which isn't good. This photo is just on the edge of acceptable due to the corner worker. Your eye isn't 100% sure where the main subject is. The second sample is the desired effect. 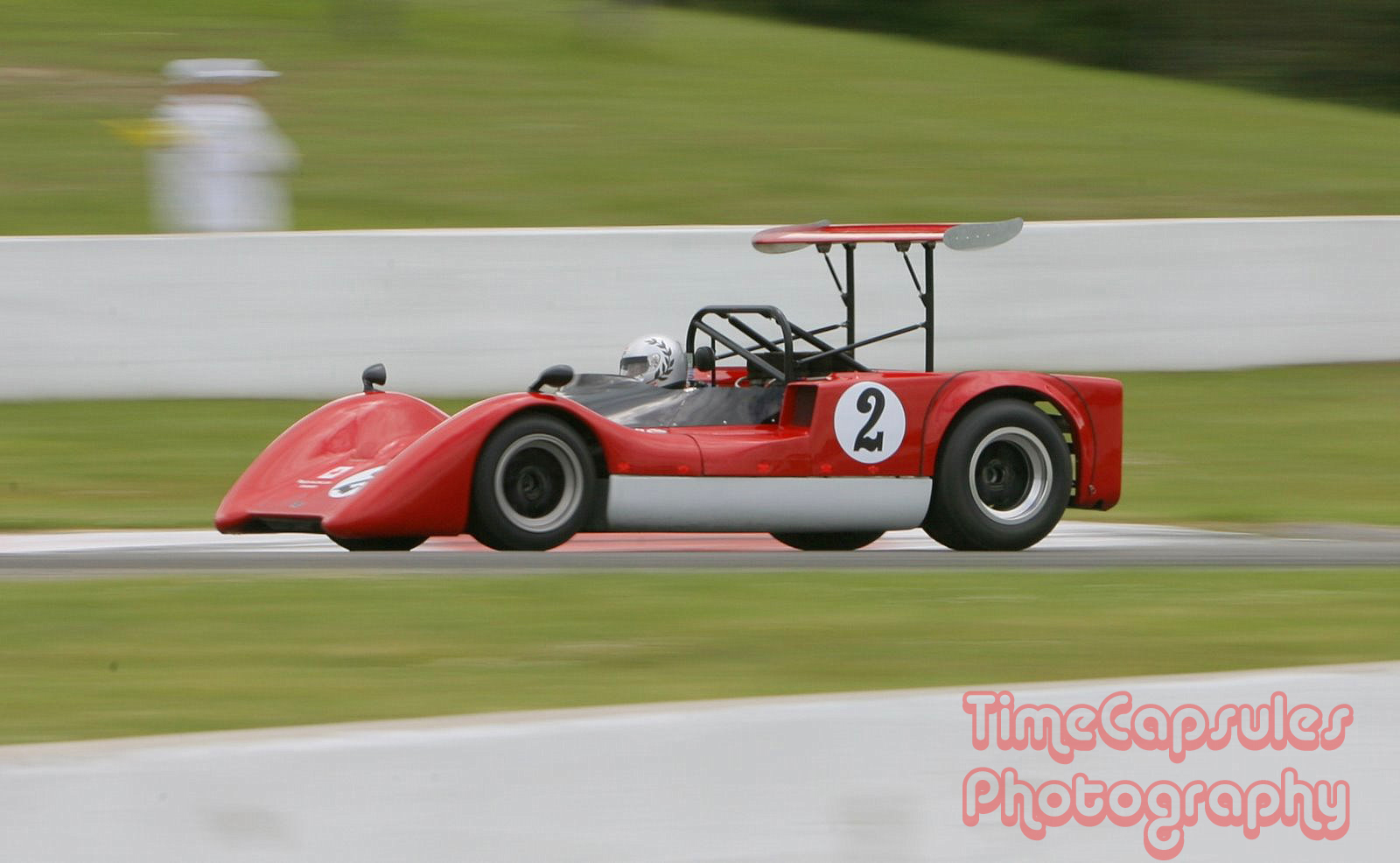 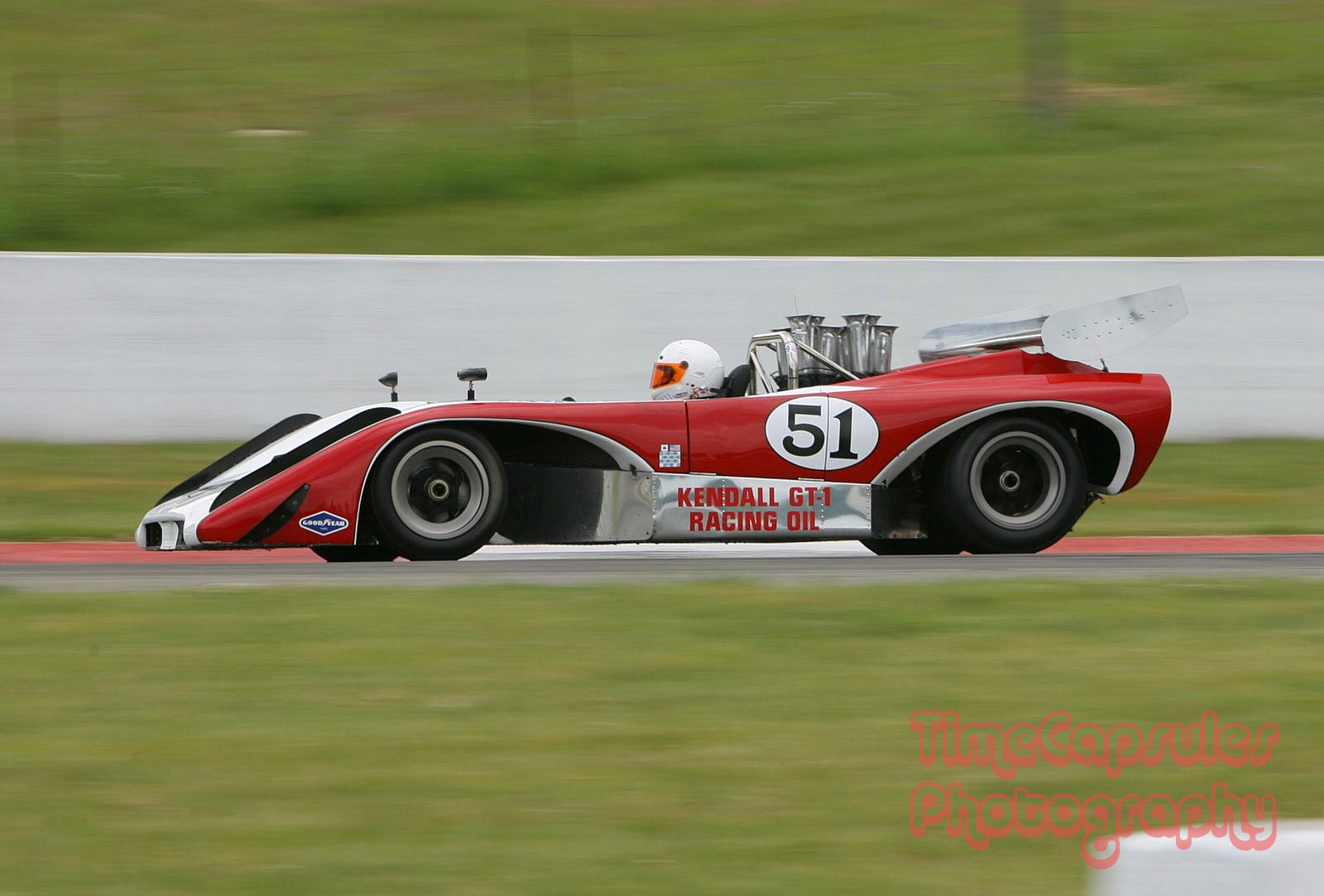 "A skill is developed through constant practice with a passion to improve, not bought."
Report Inappropriate Content
Message 13 of 19 (2,971 Views)
Reply
0 Kudos
TTMartin
Respected Contributor

TT your sample is good but in general we try to show some motion blur in Motorsports with a few exceptions.

I agree. But, if you had read my post you would have realized that the photo was not posted to illustrate either specific gear or photographic technique. But, was a photo by another photographer, of me and my car participating in autocross, nothing more.

I did read the post but missed that you were the driver rather than the photographer. It happens.

"A skill is developed through constant practice with a passion to improve, not bought."
Report Inappropriate Content
Message 15 of 19 (2,956 Views)
Reply
0 Kudos
amfoto1
Reputable Contributor

@hoosierdaddy wrote:
Hello all! New to the Canon Community. I've been a hobbyist for a few years with prior experience starting with the A2 and Elan film bodies. In addition to the film bodies I also have a Rebel XT (circa 2003-2005). I took some time away from Canon, and have been relying on my smartphone's (8MP) camera for the last several years. I write an automotive lifestyle blog, travel for motorsports as well as club events, and go any other car event close to me. Looking to get more serious about my product/results, and would like to hear recommendations for a body, and the 1-2 must have lenses as well as any other gear that would be useful for car shoots and motorsports. I still have four lenses: 28-105mm, 85mm, 100mm macro, and 75-300mm ultrasonic lenses from my film days. My thought for the first lens is the 24-70mm II f/2.8 USM for the utility role. Any advice would be most appreciated, and thanks in advance

Assuming they are EF lenses you used on your XT, A2 or Elan, they will work fine on a new camera. No need to buy a new lens unless you really want one.

The EF 24-70mm f/2.8L USM is a fine, premium quality lens. It's also fairly pricey, large and heavy. You might also want to consider the EF 24-70mm f/4L IS USM, which is not only lower priced, but also a bit smaller, lighter and it even has image stabilization (which the f/2.8 lens lacks). The f/4 version also has exceptionally close focusing and is able to do very high quality 0.7X magnification or nearly 3/4 life size on its own, so you might not need to carry a macro lens a lot of the time. The f/2.8 lens' maximum magnification is 0.29X or a little less than 1/3 life size. (Either lens can be made closer focusing by adding a macro extension tube.)

There's also the EF 24-105mm f/4L IS USM II, which uses a new "Nano USM" focus drive that's not only fast (like most USM lenses), but it's also quiet and smooth (like STM lenses). This makes it useful for video work, as well as still photography.

But if you instead get a full frame camera such as 6D Mark II, 5D Mark IV, 5DS-R or 1DX Mark II, you would need to limit yourself to EF lenses, such as those above (and the lenses you already have).

The weakest lens in your current kit is probably your EF 75-300mm, especially if it's the "III" without either USM or IS.... which is a pretty basic, inexpensive "kit" quality lens that has been "bundled" with a lot of the Rebel camera models over the years. There are a number of Canon 70-200mm, 70-300mm and 100-400mm that would be a significant upgrade and particularly a much better performer for action shoots such as motorsports. .

EDIT: I read a bit farther and see that you mention a budget of $2500. That being the case, I'd recommend the 80D with EF-S 18-135mm IS USM "kit" lens. While not quite as high performance as 7D Mark II, the 80D actually has higher resolution and uses a newer design sensor, yet is considerably less expensive. It can be bought new in kit with that lens for $1500 right now (after a $300 instant rebate). The same kit is available "refurbished" direct from the Canon USA website for $1130.

In comparison, the 7DII in kit with 18-135mm IS "STM" lens (which is a bit slower focusing than Nano USM) costs about $1850 after instant rebate... wiping out most of your budget. The 24MP 80D can shoot stills at a very respectable 8 frames per second, while the 20MP 7DII is a little faster at 10 fps. The 80D has a fairly sophisticated 45-point AF system (all the faster "cross" type, 27 points are "f/8 capable" with select lenses). The 7DII has an even more sophisticated 65-point AF system (all cross type, only one f/8 capable point at the center). 80D has an articulate Touchscreen LCD monitor. The 7DII's LCD monitor is not articulated and is not a Touchscreen. 7DII has dual memory card slots (1 CF, 1 SD), while 80D only has one (SD). 7DII has a bit better sealing and durability.... is rated for 200,000 actuations. Not sure about the 80D, but suspect it's rated for about 100,000 actuations.

Actually, a 70D would also be fine for your purposes. It's 20MP, same as the 7DI,I and has a 19-point AF system that's similar to the original 7D model's. Now discontinued, 70D are hard to find new, but often available refurbished directly from Canon.... body only for $750 or in kit with EF-S 18-135mm IS STM lens for $850 right now. That would leave more money to put towards your telephoto, other lenses or accessories.

I would not recommend any of the full frame cameras, which are more expensive and probably more than you need... plus are limited to full frame capable lenses which tend to be bigger, heavier and more expensive, too. Except for the top of the line 1DX models, FF cameras also aren't as fast shooting as the 80D and 7DII... slower frame rate, slightly slower flash sync, etc.

Thank you indeed for that thorough evaluation and recommendation! It's extremely helpful to me! You've given me a lot to think about. I was/am considering the 7DII, but hadn't thought about the 80. Thank you as well for the analysis of the lenses. I have a local shop in (DC) willing to buy my old Ultrasonic lenses to upgrade to L glass. They have presented me with several used 5DMKiii and 7Dmki's to consider. They also mentioned Sony's mirrorless A7 series.
Report Inappropriate Content
Message 17 of 19 (2,925 Views)
Reply
0 Kudos
Waddizzle
VIP

Thank you indeed for that thorough evaluation and recommendation! It's extremely helpful to me! You've given me a lot to think about. I was/am considering the 7DII, but hadn't thought about the 80. Thank you as well for the analysis of the lenses. I have a local shop in (DC) willing to buy my old Ultrasonic lenses to upgrade to L glass. They have presented me with several used 5DMKiii and 7Dmki's to consider. They also mentioned Sony's mirrorless A7 series.

Stick to a Canon DSLR.  The most common complaint with Sony, and most every other mirrorless brand, is the short battery life.  Stick with a Canon DSLR, and get a battery grip for extra power, so you shoot 1000 shots on a single charge with a big lens.

The 5D3 and 7D2 are both professional grade workhorses.  But some of the newer camera bodies outshine them when it comes to the number of AF points that can focus at f/8, 1 versus 27 points.  The biggest advantage with the 5D3 and 7D2 are body builds, which is a BIG plus in their favor.  But, how much that outweighs a more capable AF sensor is up to you.

Personally, I have used the 7D2 and 80D side by side for a few months, and found that I liked th 80D better.  When shooting action sports, sometimes you need very fast shutter speeds.  Maybe not so much with motorsports, but with most sports you want to use a high shutter speed.  Unless you have a very fast telephoto lens [EXPENSIVE], your aperture will be somewhere between f/4 and f/8, most likely closer to f/8 than f/4.

I would go for the full frame 5D3 over the 7D2 in a heartbeat, because of its' lower noise.  Another potential winner could be the 6D2, which has low noise performance comparable to its' predecessor and 27 AF points that work at f/8.

I think that whatever lens you choose, should be considered when you select a camera body.  Pick a lens, then pick a camera body that can get th most out of it.

"Doctor told me to get out and walk, so I bought a Canon."
Report Inappropriate Content
Message 18 of 19 (2,892 Views)
Reply
0 Kudos
hoosierdaddy
Occasional Contributor

Wadizzle, I hadn't considered the 80D previously so I'll check into that as well as the 6D2 which I'd just found.  Thanks for the information!
Report Inappropriate Content
Message 19 of 19 (2,873 Views)
Reply
0 Kudos