Auto-suggest helps you quickly narrow down your search results by suggesting possible matches as you type.
Showing results for
Search instead for
Do you mean
Reply
Topic Options
MSGT-USAF-Ret
Occasional Contributor

I'm looking for a Manual for a Canon EF 400mm f/2.8 L NON IS ii USM They were manufactured starting in 1996. does anyone know where I can get a copy of the manual.

So to help clarify what I'm looking for

I need the series ii

I'm hoping someone has one and they can scan a copy for me.

The manuals for lenses don't have a great deal of info in them.  They aren't like camera manuals.  Is there s specific questio?

Otherwise I don't know where to get one if Canon doesn't have one on the web site.

yes what is a explanation of all the buttons on this lens, how and when to use them. 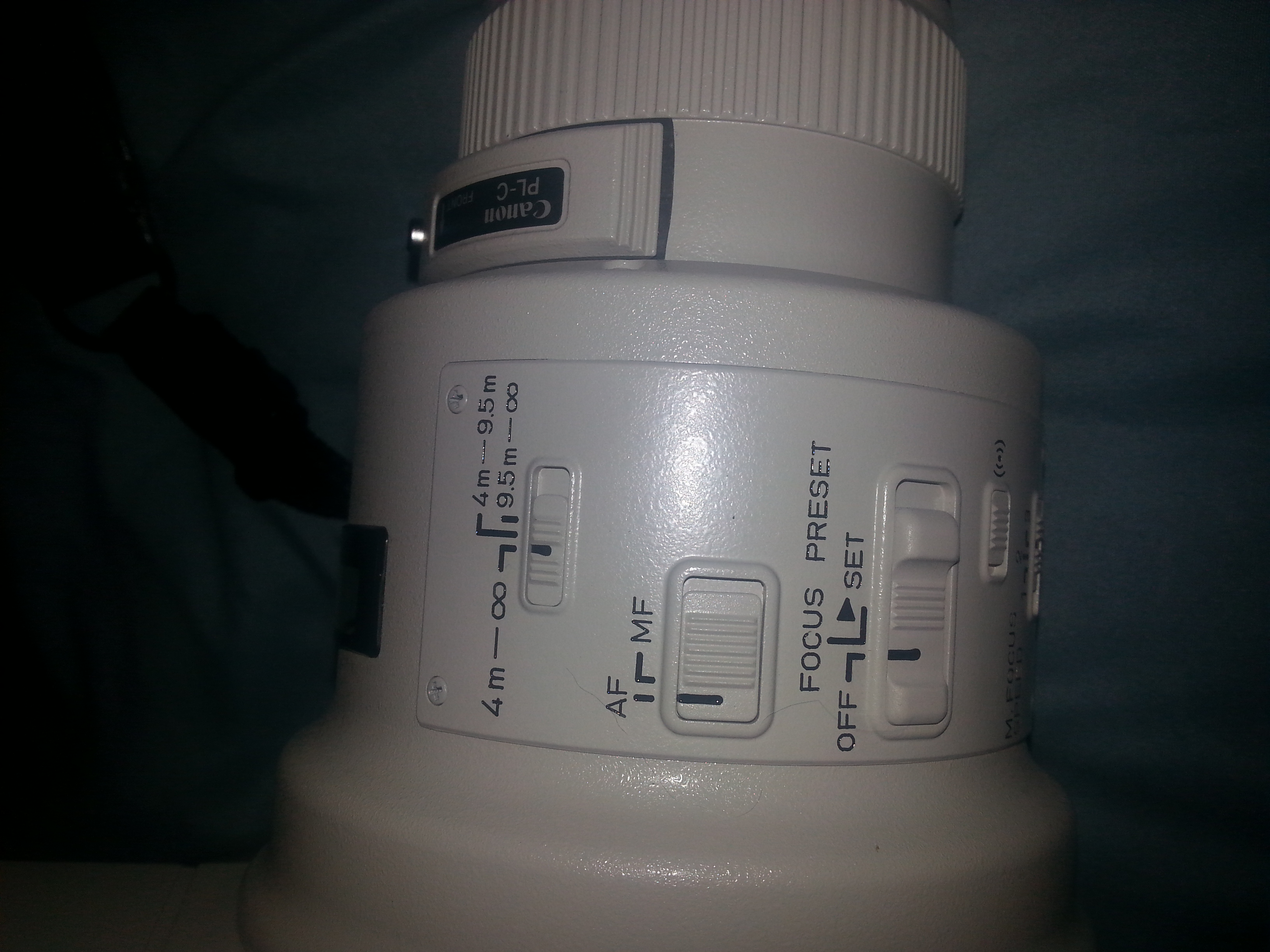 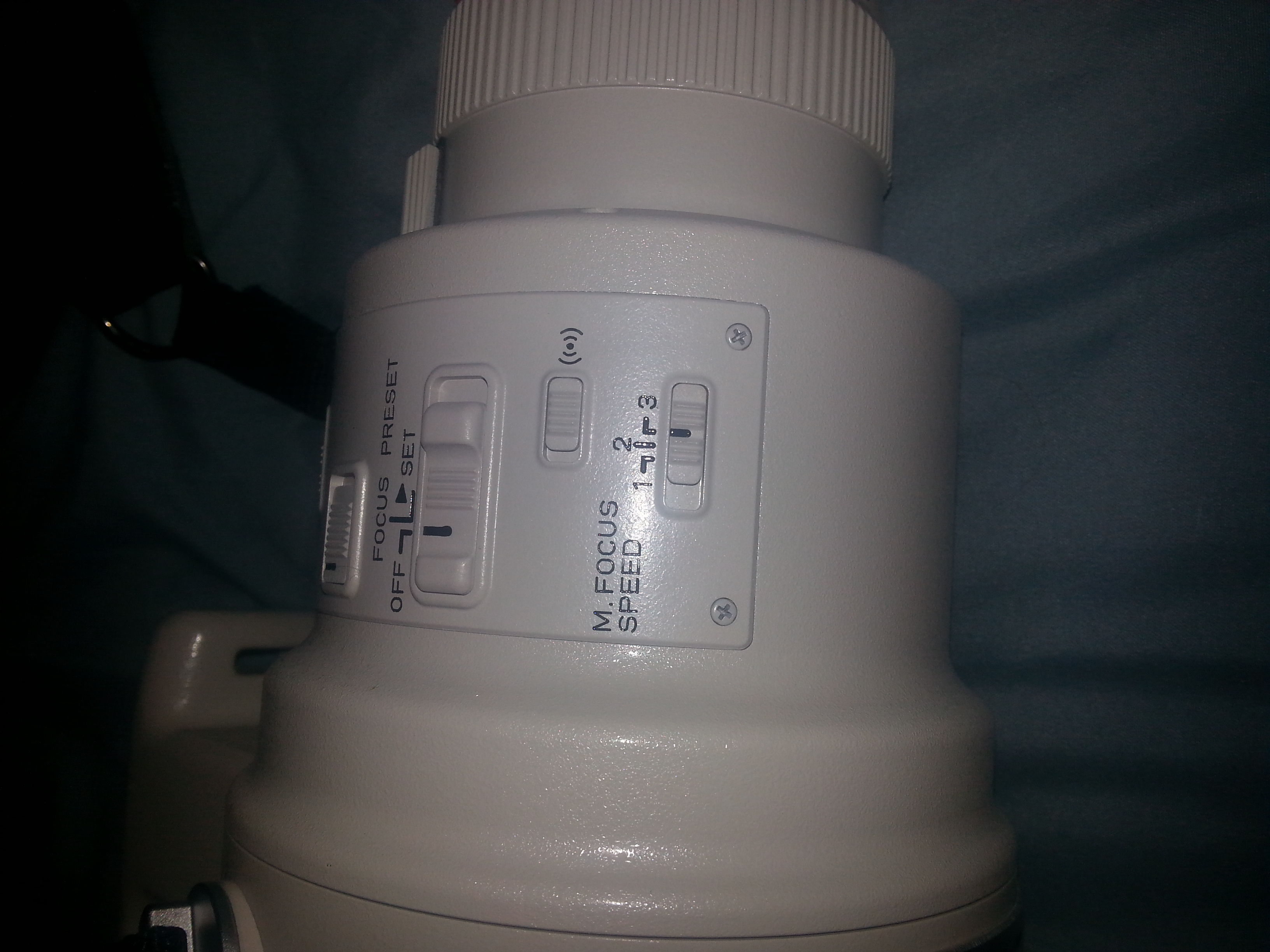 what do the different buttons do, tell me about the drop in lenses and what size will work in it. see attached picture.

The top switch is focus limiter.  It won't allow the lens to go to min focus which speeds it up.

Next is the AF auto focus or MF manual focus switch.

Focus pre-set lets you choose a focus distance. When you press the camera button half way the lens will go to that distance.

The M-focus speed is now controlled by the focus ring and no longer needed.  Set it where you like it.

This is the 2nd version of the EF 400/2.8L which adds a fluorite element and has improved sharpness. It is a very heavy lens, so think carefully if you intend to carry it around in the field. You will need a very sturdy tripod.

It is not weather sealed like most other L lenses.

The 400 f/2.8 IS utilizes 52mm drop-in filters. Included is a drop-in gel filter holder with a plain glass filter.

This is a great lens and I hope you have an equally fine camera to use it on.  You really need a 1 series to balance out the weight.

I don't have or have never used this particular 400mm lens.  I just know how Canon lenses work.  I think my answers are correct but maybe not.

I do not own this lens, but I do own the EF 300mm f/2.8L IS USM which has similar (though not identical switches.)

On my lens, there is a black rubberized ring near the front of the lens and within that ring are a number of black buttons (spaced periodically around the ring).  All of these buttons perform as the "AF-Stop" button.

However... there is also a ring which resembles a gear and it's behind the black ring with the AF-Stop buttons.  That ring can be twisted left or right but is actually of kind of button.  They call this the "Playback ring".  More on this in a moment.

The panel near the back of the camera has a set of PRESET controls and on your lens it's labeled "Off", "Focus" and "Set".  These work with the "Playback" ring and, if my notion about the switch with the (((o))) is correct, that switch is part of it.

Suppose you've been watching for wildlife and your lens is trained on a nest where you are waiting for a bird to return to feed her chicks.  But as the mother is away, there's not much happening in the nest right now, so you're looking for other interesting targets.  But when the mother does eventually return, you want to be able to quickly focus and shoot.

You can establish a memory "preset" for focus.

You've just established a focus preset to that specific distance.

NOW you can focus on other things, but when the event you've been waiting for is about to occur, you can gently twist the playback ring (it rocks left or right when you twist and when released it snaps back it's center position - it's not like a focus ring where you can just keep rotating it.)  This causes the lens to INSTANTLY return to your focus preset distance.

This is a little different than the arrangement on my lens (and all long Canon white lenses).  The focus preset swtich is now labeled "Off", "On", and a speaker icon.  Preset is, of course, disabled in the "off" position and enabled in the "on" position, but in the speaker position the lens will make a beep when the lens has locked focus at the preset position.  Our "set" is no longer on the switch but is instead it's own button next to the switch.

I suspect the "(((o)))" switch is probably to enable the beep -- it would only beep after returning to the focus preset position (when you rock the playback ring the lens will quickly snap the focus back to your preset and then "beep" for you.)

Give it a try and see if that works.

I may be wrong on that function, but most current long focal length L series lenses can beep on a focus-playback so I'm guessing yours can too.