Auto-suggest helps you quickly narrow down your search results by suggesting possible matches as you type.
Showing results for
Search instead for
Do you mean
Reply
Topic Options
PhotosByNeva
Frequent Contributor

Ok, since I have gotten some really good (and much appreciated) advice here, I have an inquiry.

Since I have to buy lenses for my Canon 6D, what is a good lens for landscape, full moons, lightning (day and night) to get? I have a photo workshop in Monument Valley in April 2016. He set if for that time because of the full moon and possible monsoonal activity, plus you cannot beat the scenery! I already purchased a Lightning Bug sensor.

I am excited to get some hands-on education with my camera from a professional!

I had one before and I really liked it. It was a Quantaray, but when it quit focusing, the camera shop said they couldn't get parts for that particular lens anymore (used it on my Rebel 35mm and DSLR).

Neither of these will 'shoot the Moon' in any great detail.  That is going to require a big telephoto.  IMHO, at least 400mm and 600mm is better.

I don't doubt this!  I am going to be very blunt and probably rude, sorry, but there are only three lens makers you should be considering.  Canon as a first choice, Tamron and Sigma as second, your choice.  Stay away from any other brand.  IMHO, as always, of course.  There are a very few, other, off brand lenses that 'work' but not as a general rule.  They all seem to have problems.  Just don't go there!  It is not worth it.

No matter what lens you buy, get it from a good retailer, such as B&H, Adorama, Best Buy, not Amazon!  Don't buy lens 'kits'.

Just get the lens itself.

Now for the Moon.  This is a 600mm lens and the image is cropped heavily.  So you can readily see if you want this you need a big lens. 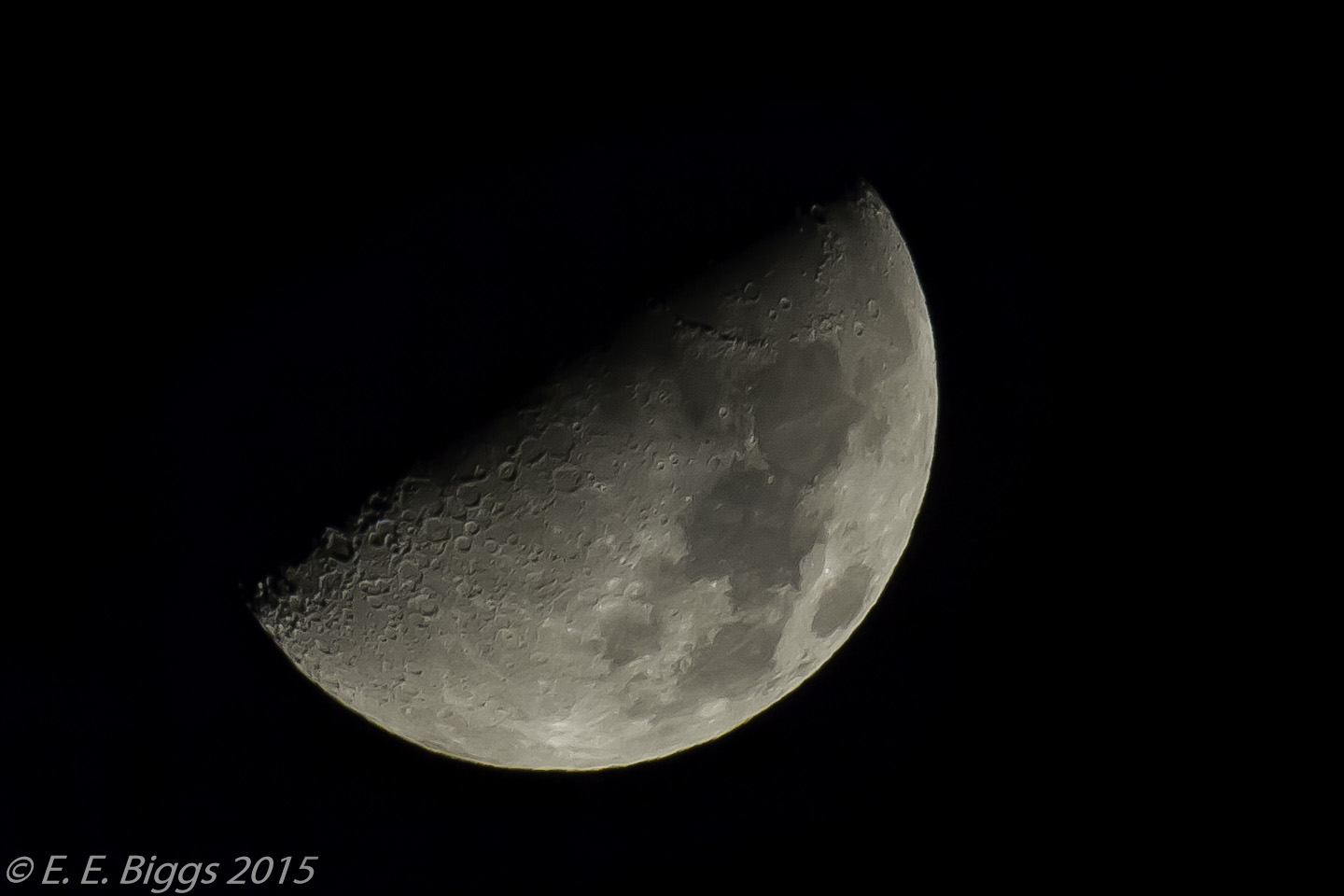 Adorama sells through Amazon. That's where I got my Lightning Bug and interface cable a couple weeks ago.
Report Inappropriate Content
Message 5 of 12 (2,621 Views)
Reply
0 Kudos
PhotosByNeva
Frequent Contributor

No problem, I got that Quantaray years ago. My brother in law was very heavily into photography and had his own dark room. That's where I learned about Tamron and Sigma lenses. Sadly he passed away in 2009.
Because I have sold some of my prints and I am getting more serious about my photography is why I am absorbing information from others with experience. No more "cheap" products. Thank you and that was not rude, I appreciate the truth and being blunt is a forte of mine!
Report Inappropriate Content
Message 6 of 12 (2,619 Views)
Reply
0 Kudos
PhotosByNeva
Frequent Contributor

EF 24-105mm Lens, so after looking at the Canon website I see they offer two lenses

f4L IS USM and f3.5-5.6 IS STM besides the obvious difference in price, what is the difference in the two lenses? Both are EF 24-105mm and I see the f stop is variable on one, not the other.  What does the "L" mean?

What does this mean to a photographer?

(I have no formal training....yet)

Just to be clear (which seems silly in a way, because John is one of the clearest writers in the group):

That lens has a constant maximum aperture of f/4 (i.e., at any focal length in its range). It's not that you can't set the lens to other apertures.

The point is that an "f stop" is the ratio of the len's focal length to the diameter of the aperture you're using. As a zoom lens transitions toward its maximum focal length, that ratio gets larger. In an inexpensive lens that's just a fact of life, but in a "constant-aperture" zoom the manufacturer cancels that effect by building in an extra margin at the telephoto end. As you might suspect, constant-aperture zooms tend to be larger, heavier, and more expensive; and they typically have shorter zoom ranges. But in low light it's very convenient not to have to deal with lower light-gathering power at the high end.

When shooting the moon, use the "Loony 11" rule.

I don't happen to think the full moon is very interesting because it appears flat and rather 2-dimensional (I prefer a less-than-full phase of the moon where shadows near the lunar terminator (the line seperating the lit vs. unlit sides of the moon) will cast long shadows so that the mountains and craters have a strong 3-dimensional appearance.

The moon rises roughly one hour later each day (that's not exact, but close.)  On the night of the full moon, the moon will rise at almost the same time that the sun sets.  You'll need to wait a short time for the moon to rise high enough and you'll be losing your light while you wait.  But it turns out that the night prior to the full moon will look nearly as full and yet the moon will rise about an hour earlier.  This means that as the sky goes dusky blue, the moon will already be higher in the sky.  A dusky blue background sky will usually look better than a "black" sky.  You wont see any stars in the sky because the moon is so bright that the stars wont be able to compete (by the time you crank up the exposure enough to expose stars, the moon will be completely blown out/over-exposed.)

1)  You will want a SOLID tripod.  Sounds like there may be some hiking involved and, if so, you'll probably want a tripod that you don't mind carrying for long distances.  You can get a shouler strap or carry bag for some tripods making them easier to carry with your gear.

2)  Get an ultra-wide lens... or rent one!  I have the EF 14mm f/2.8L II USM, but there are several choices.  Some of these lenses are expesnive.  There are some off-brand lenses that are completely manual (no electronics) but more affordable.  The wider, the better.

The point of the "wide" lens is because the number of seconds that you can leave the shutter open to expose the stars without the rotation of the earth blurring the stars (the stars will appear to grow "tails") is based on the focal length of the lens.  You can divide (for a full-frame camera such as your 6D) 600 by the focal length of the lens.  For example... at 15mm it would be 600 ÷ 15 = 40.  That means you can leave the shutter open for 40 seconds.    Some night-scape imagers will reduce the 600 to 500 to be a bit more conservative.

Keeping with that "the moon rises nearly 1 hour later each day" idea... if you wait about 2 nights after the night of the full moon (I'm not sure how long you'll be there) you can capture some Milky Way shots.  In April the Milky Way will be setting in the west.   The moon creates so much light pollution that it will really weaken the effect (it will be difficult to see any structure in the Milky Way if you do this when the moon is up).  But since the moon wont rise until a couple of hours after sunset if you wait until about 2 nights AFTER the night of the full moon, there should be enough time for the sky to get nice & dark and capture a few shots before the moon rises and washes out the sky.

This brings me to one more thing to add to your shopping list:

3)  Get a remote shutter release (the "wired" type -- not wireless.)  Your camera will allow you to set shutter times up to 30 seconds... but not longer.  If you want a longer exposure (e.g. 40 seconds... or 45 seconds, etc.) then you'll need to put the camera into "bulb" mode and now you'll need a way to keep the shutter open as long as necessary and that's where the "wired" shutter release comes in handy.

You can get a basic wired shutter release like the Canon RS-80N3 which keeps the shutter open as long as you keep holding the button down (there is a "lock" switch which will hold the button down for you).

There are more advanced models with built-in timers such as the Canon TC-80N3.  That release allows you to program the duration of each shot, the number of shots to take, and the amount of time to wait between shots (you can program it to create time-lapse sequences, for example.)  There are 3rd party releases as well... just make sure you get a model compatible with your camera (which requires the Canon 3-pin connector.  Some Canon cameras use a connector that looks like a stereo headphone jack, but your camera uses a modular 3-pin connector.)