I mean the end results are similar

I mean the end results are similar

To be honest I am not sure exactly what you mean, but I am going with the concept that the R-series cameras have not moved forward from the quality of outcome of the later EOS 5D or 1DX series.

In the case of the early EOS R, which was equivalent to the EOD 5DIV, and the RP, equivalent to the EOS 6DII, you might have had a point, but the new R5 and R6 units, with their IBIS (for compatible lenses) and tracking technologies are a major step up.  They also have new sensors that are ahead of the previous units - see the reviews below...

For a reasonably in-depth review of Photographic performance of the

ANY new camera takes some time to get to know and that is further emphasized by the use of mirrorless for those coming from the EOS DSLRs.

However Trevor any new  tech should be better than existing tech.  Sensor vs sensor or DSLR vs mirrorless.  Mirrorless is the way of the future so development in DSLR tech is going to be over shadowed. Just as a 1DX Mk III is better than a 1D Mk IV.

However Trevor any new  tech should be better than existing tech.  Sensor vs sensor or DSLR vs mirrorless.  Mirrorless is the way of the future so development in DSLR tech is going to be over shadowed. Just as a 1DX Mk III is better than a 1D Mk IV.

In principle, I agree with you Ernie.  But in some cases the word SHOULD becomes significant.  Looking at Canon's early forays into digital, I was not impressed by the bodies and have stayed away from the R and RP models as, to me they did not represent a good enough improvement on what I have to justify the investment.  To me, they were a dipping of the technical toes into the mirrorless pool and provided a platform off which to launch the RF mount, and to bring their RF lenses into the market.   I felt they were either experimenting, or (as many commentators suggested) holding back to mature some serious offerings - and I think that this is what we have seen in the R5 and R6 in particular.

As to my byline:  I will offer another quotation...

"A bear with a great camera is still just a bear" 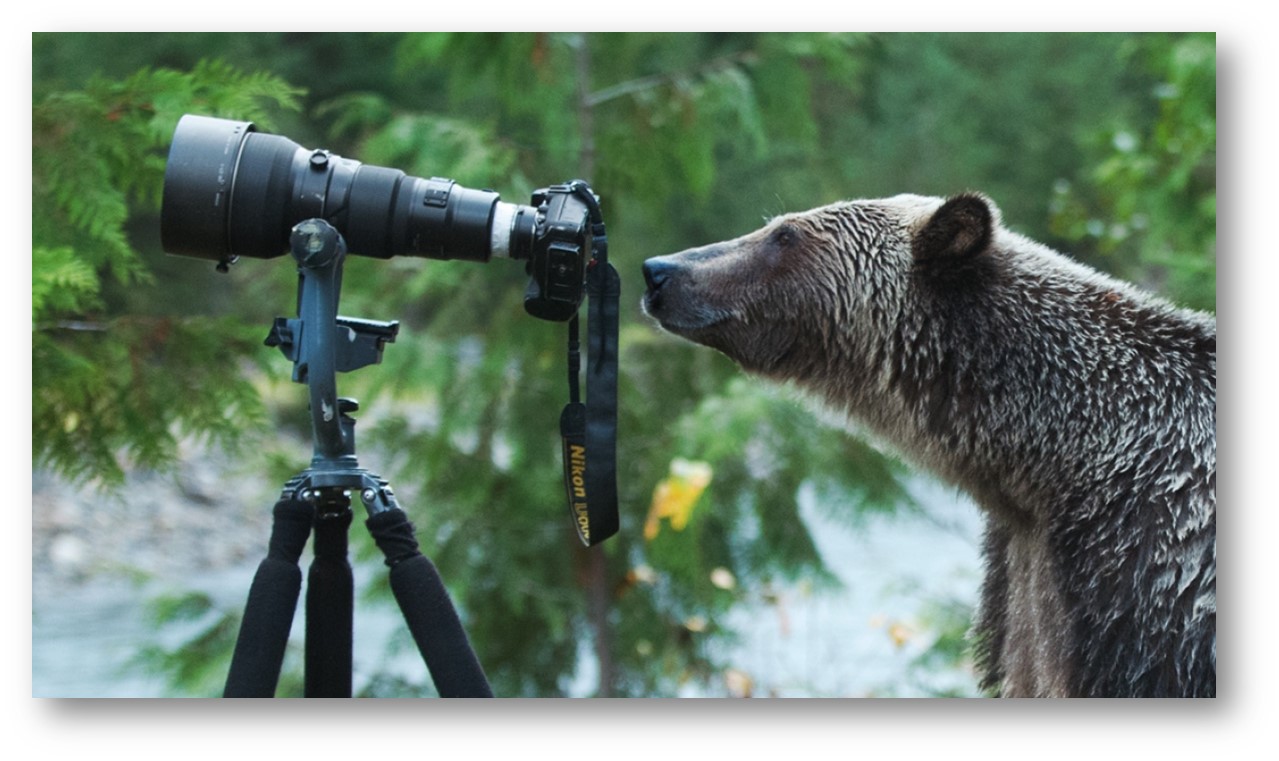 Jim Lawrence, a Canadian photographer took this, using his backup unit, of a grizzly bear exploring his main camera.

More seriously though.  If I give a humble camera to a skilled photographer, I would expect a better result than achieved by an unskilled shooter with a great camera. A skilled photographer knows their gear and can get the best from it.  All the tech in the world is useless if the operator fails to leverage it effectively.  First and foremost, a great photograph depends more on what and how it is being shot: the composition if you will, rather than the camera, and creativity, treatment and composition are currently very human elements.   A great piece of tech will likely help a good photographer take better pictures, but it will not make a bad photographer something they are not.   I refer you to this video:

However, Trevor, neither statement, yours nor mine, is set in stone. The swordsman quotation seems to make it so, however.

I can relay examples of my DSLR 101 folks all using the most basic gear made, for the most part, but rendering vastly different results. You are that accomplished photographer that seems to get the most from the least.

Trevor you are not old enough, I am, but if you go back to the very early days of digital, you would see the same thing that  mirrorless is going through right now. People swore the digital would never take over film. It just wasn't possible. And, the first DSLRs was not much to speak of and costs a mint. Some still say digital will never take over film! Photoshop only did B&W and only had four adjustment settings.

Mirrorless in its beginning was not ready for prime time. As far as I am concerned it still isn't.  Remind you of the old film guys?  But R&D is expensive so companies want to recoup expenses quickly if the can. So, they rush something to market.

Canon "M" series might be considered one. I didn't think they would extend it when they come out with the vastly better "R" series.  One thing for sure the "R" series lenses are world class or even out of this world. They are simply superb. Again nobody makes lenses like Canon.

"A bear with a great camera is still just a bear", yes sometimes! However, not always.

Ernie, my friend, I am flattered that you think I am that youthful.

I was in my late 20's when I started seriously shooting back in 1980, so I saw the birth of digital just like you did.   I absolutely agree that every new technology has to go through a period of denial from traditionalists and those who look at the technology at the time and see it, not as the beginning of a new evolution, but as a finished product - and judge it as such.

Certainly, technology can greatly assist those who either lack, or are developing the skills.  Back in 1888, the Box Brownie democratized photography and took it from an elite of highly-educated, resourced and technically skilled practitioners, and through its simplicity and the removal of any responsibility for handling and processing the film, empowered millions to take photos of the minutia of day-to-day life: something that was previously lacking.  It also gave the masses a chance to express and record their views of the world, their families and their lives.  I believe we saw that same effect replayed when the cell phone gained a camera and, combined with the ability to post images instantly, has seen our world recorded (for better or worse) like never before.  With the accelerating development of technologies, I am almost afraid to speculate what photography will look like in the middle of the centurey.   At 68, I don't expect to see that, sadly.

As to the debates on mirrorless, my studies into the history of photography show that similar debates were expressed when the first cameras were actually invented, then when the Box Brownie came along and so on...  As they say the only constant in life is change.  There are always nay-sayers or those who feel threatened by something new.

Your comments about the newest digital and optical offerings from Canon are something I can embrace.  That is why I was rather critical of the OP's inane submissions.  One of the double-edged benefits of the web is that anyone can publish, and there are many ill-informed and ignorant people out there, or those with agendas pushing opinions and propoganda.  When they come into this space and repeat them that cannot go unanswered IMHO.  I have stuck predominantly with Canon for 40 years, and certainly intend to do so.

The quotation is a quotation and it represents an alignment with my own philosophy.  What it does not express is any antipathy towards mirrorless cameras and new technology as such.  Way back, I bought into the EOS M series because the cameras were so compact that I could carry them when I could not have done so with conventional DSLRs, and they have worked well for me, not only for their light weight and compactness, but for their lack of intrusiveness  - and I still use them as occasion offers.  I think that the new wave of FF MILCs is a huge step forward in the development of conventional cameras (as opposed to cellphones and computational photography, for example).  We each have our own situation, but right now, with so much DSLR gear, it will be a while before I can justify the expenditure on these units, as to get their full benefits, I would want the very expensive glass that goes with them.   With the collection of gear that I have I don't think I can be accused of not keeping up with gear investment.

I think that with gear like the new R-series bodies and the opportunities offered with the new RF mount that we are entering a whole new and expanded world of performance and possibilities.  I am not sure if you mis-construed my post to the OP, but I was trying to defend the new Canon tech and call the OP out on what I felt was an unjustified post.  I did express reservations about the very first R-series bodies to come out, but I did say I saw them as an interim platform for introducing the mount and lenses.  The new R5 and R6 show an amazing lift in that performance and truly put Canon at the forefront of the mirrorless movement.  It's an exciting future!