Auto-suggest helps you quickly narrow down your search results by suggesting possible matches as you type.
Showing results for
Search instead for
Do you mean
Reply
Topic Options
davikokar
Occasional Contributor

Do you use the 100-400mm in combination with 2x extender ? What do you think about this combination ?

Typically only an f/2.8 lens is appropriate for use with a 2x adapter (because they become f/5.6 lenses when they're on the adapter.)

Although they increase your focal length, extenders also 1) cut out the amount of light, 2) compromise image quality. The first point has the added complication that it can affect autofocus.  All cameras have a minimum aperture size that it needs for autofocus to work, most are around f5.6, some high-end cameras go up to f8.  The 2X will move up the largest aperture size of the lens two stops.  So the 100 – 400 f4 – 5.6 will become a f8 – f11.  Even high end cameras will probably struggle once zoomed much past 100mm.

You’re most likely not going to have auto-focus, so how do you feel about using manual focus only?  The 2X will also compromise sharpness a bit, so you’ll probably have to stop down the lens quite a bit to get a result you like (plus the extender cuts out 2 stops).  It’s fine if you have enough light, but it’s going to cut into your flexibility.

The best it gets is to use it with a Canon7D and take advantage of the 1.6 crop factor.

Hi, I have just purchased a Canon EF 2X III teleconverter, it's between a Canon 70D and a Canon EF 100-400mm IS-L USM lens. The TTL auto focus does not function, BUT, with the ground breaking dual pixel CMOS in the Canon 70D, I can use the lens's auto focus in LIVE VIEW. The length and weight of this combination means no hand held, tripod only. I use a stylus, as for an iPad etc, to chose the focus point on the LCD screen in live view, and the new auto focus system instantly focuses on that spot. I am getting results at 800mm (1280mm with 1.6 crop factor of the smaller sensor), that are, I think sharper than hand held at 400mm (640mm) with the lens only.

So, to those blogs I read that say the Canon teleconverter stops auto focus, look again with a 70D in live view!!

When the high end cameras recieve this new dual pixel sensor technology, the teleconverters will be very useful.

Now that you have had the combination of the EF 2X III teleconverter with the EF 100-400mm IS-L USM lens and 70D for more than a year do you still think it was worth it?

In particular, if you tripod mount the lens both with and without the teleconverter, and compare the quality of the photos blown up to full pixel resolution, how good does it look. Is it still worth the investment to get the extender considering that you will need to bump up the ISO to get the same shutter speed (adding noise) or reduce the shutter speed to keep the same ISO (adding the potential for image movement).

I currently have the combo of EF 100-400mm IS-L USM lens and 70D that I use for wildlife photography (with a tripod). Adding a 2X teleconverter is tempting but if it reduces the quality to what I'd get hand holding the lens then its a poor investment for me.

I had read numerous online posts from "experts" that an extender will make the images look soft and that you will lose contrast. "They" also said you could get just as good a result by not using the extender and blowing up your images by 2x. I decided to put this to the test. I want to be able to take wildlife headshots that show whisker detail from far enough away that there's no danger of getting my face ripped off or getting gored. So I set up a resolution test chart 75 yards away in a somewhat open forest that had dappled light, probably the worst conditions that I could expect to be successful in. I then took multiple photos and varied the following: Old and new lens, no extender, 1.4x and 2x extenders, f stop, ISO, tripod vs. hand held. Shutter speeds were slow at reasonable ISO settings due to the light and gave a good test of real world conditions. I found the following:

1.Mounted on a secure tripod and without an extender both the old and new lens gave approximately the same maximum resolution (about 12 lines per inch) at 75 yards, the resolution limit is driven by the number of pixels in the camera, not the lens.

2. When using the extender, even when mounted on a tripod, you will need to set the shutter to high speed continuous and take 4 to 6 images so that you get at least a couple good images. Breezes and shutter vibration will cause some movement during exposure.

4. The real difference between the two lenses is the image stabilization. A hand held shot with the old lens at 800mm was laughable; it was just one big blur. The image stabilization with the new lens makes hand held shots possible if you are leaning against a support with your elbows tucked in and control your breathing (or rest the lens on support). You will need to set the shutter to high speed continuous and take 5 to 10 images. I got about 50% that looked at least OK and about 20% that were really good even with shutter speed under 1/100.

Here is a jpg copy of a test shot I did handheld. It’s lost some resolution in the jpg conversion process but you can get the idea. This was the best of a half dozen images and was shot at 1/50, f11, ISO 320. The target is 20” across so you can think of it as a head shot of a mountain goat or grizzly bear. It’s good enough for printing to 8x10 or smaller or for use on the web. I found the best tradeoff of ISO, f stop, and shutter speed at 800mm to be ISO 320, f11, and as fast a speed as lighting will permit. That was true whether handheld or using a tripod.

As you can tell from the resolution chart, I won't be getting any bear photos showing whisker detail any time soon, even 25 lines per inch won't capture that. 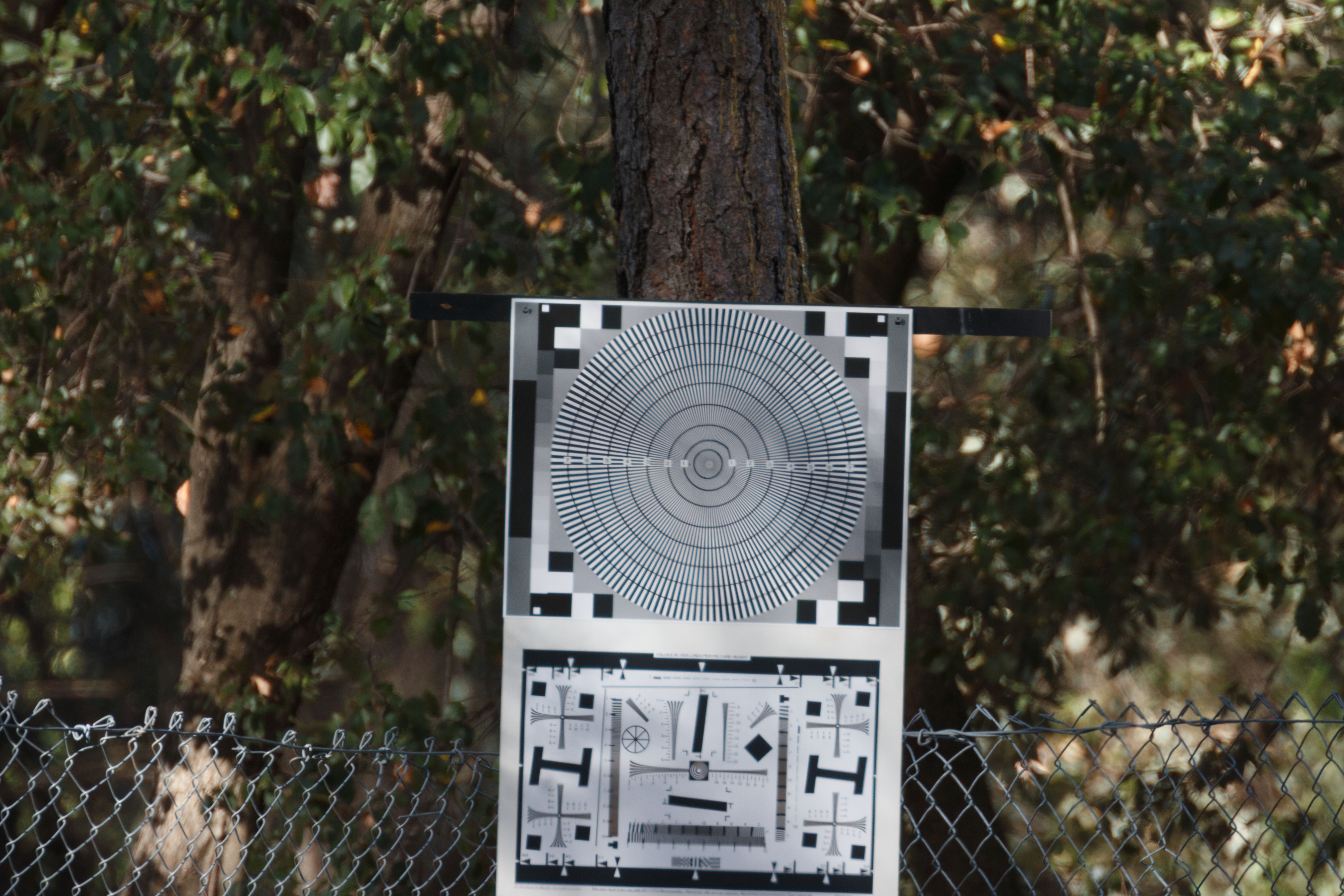 Why aren't you shooting faster shutter speeds handheld?   I was taught to double my focal length to get a shutter speed that will be sharp when shooting handheld.

Also, some within this thread said that auto focus at F8 does not work.   I used my 100-400 IS @ F8 to shoot surfing photos recently and didn't have a problem with auto focus, my body is a 6D.

ParadisePhil, to be honest I got tired of having to cart the 2X converter, tripod etc and I bought a 7D MKII which doesn't have the versitile swivel, touch screen. The 70D has been relagated to my 24-105 USM lens. I'd love to buy the new 100-400 USM II lens, it sounds great. Oh the cost of a hobby!