The circular polarizer is fantastic for landscape (it sounds like you want to photograph landscape) because foliage tends to have a "waxy" or somewhat glossy coating on the leaves and that creates a reflection  Those reflects dull the image because the plants look "less green" than they really are.

Anytime light reflects off a shiny surface (no matter how microscopic the shiny surface) it causes the light to take on an polarized wave pattern.  Non-reflective surfaces "scatter" light.  Flat paint "scatters", glossy paint "reflects" light.  But you can think of every surface as a hybrid of a flat color with a shiny coating.  The shiny coating gives a reflection from other sources of light, but if you take away that shiny reflection you would see the "true" color of the object below the shiny layer.

The circular polarizer allows you to selectively choose which angles of polarization can pass through the filter and this lets you selective "reject" just the reflections.

The result:  Your images will seem to be more saturated with color... the greens of the foliage look greener.  The blues of the sky look bluer.  The white puffy clouds look whiter and punch out stronger.

The filter works best when the source of light (usually the sun) is originating from some orthogonal (the closer to orthogonal, the better) as these reflective angles will very strongly polarize the light and allow the filter to work exceptionally well.  If the sun is nearly straight ahead or nearly nearly straight behind the camera then the polarization doesn't work nearly as well.

Apart from that, a protective filter can be used if you're in a situation where you think you need the protection.  I "own" a UV filter for every lens that I have.  But these filters are not usually on the lenses.  If I'm going out in less-favorable shooting conditions (dusty, windy, perhaps rainy or I think I might catch some spray, etc.) then I might put the filter on.  The coated filters (MRC) are the best because the coating repels dirt, but more importantly the coating increases light transmission and reduces reflectivity.  If you look at a piece of "clear" glass and can see your reflection in it, that means some light hit the filter and bounced back toward you INSTEAD of passing through the lens.  A lens (filter) with excellent anti-reflective coatings will let nearly all the light pass through and almost nothing is reflected back at you.

You may wonder why you'd worry about reflectivity of "some" light when you're in a shooting situation where light is abundant.  But the reality is that if light can reflect "out" then light can also reflect "in".  Image you set up two mirrors that face each other so you see that infinity of a reflection of a reflection of a reflection, etc.  Your lens' outer-most element can be a tiny bit reflective.  If the clear filter you thread on to the front of the lens is ALSO reflective then you have the potential to get reflections in your image that were caused by the filter itself (not really present in the scene -- and I think a number of UFOs can be attributed to this problem.)  Since the filter is "clear" but still gives a reflection, what you usually get is a "ghosting" effect.

Here's an example of two filters: 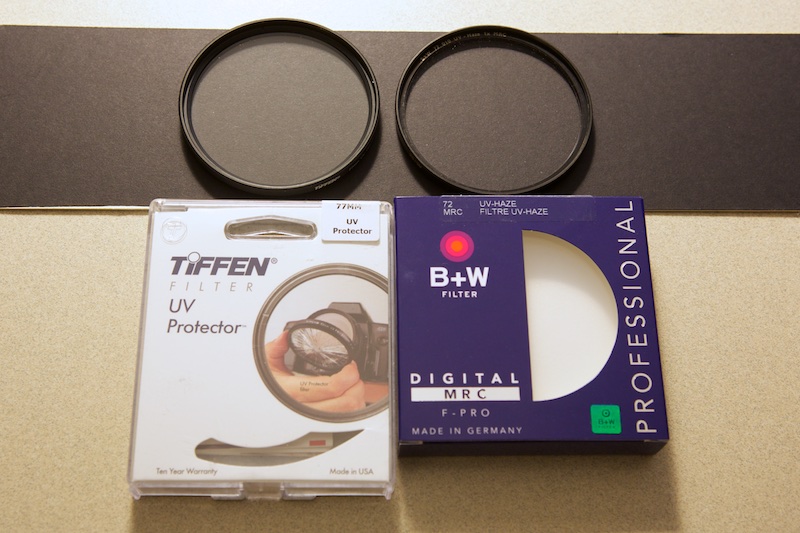 I placed both filters on a piece of black cardboard stock.  There is a desk-lamp out of frame.  These filters are both placed so that the light source doesn't really favor one more than the other (not in any significant way - and you can see the shadows of the boxes that these filter came in as a stronger clue as to where the light source is positioned.)

The "filter" on the right almost looks like a black ring that doesn't even have glass in it -- I promise you there is a filter in that ring even though you don't see a reflection, shine, or loss of contrast.

The "filter" on the left definitely has a shine on the glass and you can see there's a loss of contrast when viewing the "black" card stock under the filter (which now looks "gray" instead of "black.)

That's the benefit of buying a high-quality filter with good coatings.

@k3v14r wrote:
Any recommendations for first filter? I shoot mostly daylight, well lit, some scenes with water, landscapes, etc. I am primarily looking for protection of my new "baby" lol (I have no kids, so this will have to do)

No filter is needed. In fact it would be kind of a shame to spend that much on an optically exceptional lens and then put an unnecessary filter in front of it.

Those front lens elements are tougher than you might think, anyway. My 15 year old "Mark I" is probably my most used lens and if I would guess has probably made around 250,000 images. It's lens hood has a few dings and the barrel shows some wear and tear, but the optics are still perfect... and I don't baby my gear, just try to take reasonable care of it and clean it occasionally.

The newer lenses supposedly have even harder, more dust resistant coatings. Not sure if that includes the 70-200 Mark II or not.

A good circular polarizer is the most useful filter for digital photography... can improve your images in a number of ways. But you don't want to leave one of those on your lens all the time, either. It "costs" one to two stops of light.