Auto-suggest helps you quickly narrow down your search results by suggesting possible matches as you type.
Showing results for
Search instead for
Do you mean
Reply
Topic Options
senilking
New Contributor

I like dabbling with astrophotography occasionally, and I'd like to try out my 50mm lens. But if I try to manually focus on something to infinity and then taking a timelapse of the stars, I usually only get 5 or 6 photos before my lense focus has drifted all the way past infinity. Is this just an issue with this lens, or is something loose on mine?  I know of other people that have used it for this, so maybe I'm just using it wrongly? Thanks.

Have you tried the Rokinon 14mm f/2.8 IF ED UMC Lens For Canon EF or the Rokinon 24mm f/1.4 ED AS UMC Wide-Angle Lens for Canon?  Both are fully manual.  I haven't either but my astro-buds tell me they are outstanding.

In any case, make sure the lens is set to manual focus.  Temperature change over the hours will shift focus (altough I would think that would be insigificant in a 50mm lens.)  In astrophotography it is normal to re-check focus periodically due to temperature change.

To manually focus you can switch to liveview, increase the digital zoom on live-view to the 10x size, and then very carefully adjust focus until your stars are as small as possible (not bloated by blur.)

You can also get a focusing mask.  I normally use a Bahtinov focusing mask on my telescopes when doing astrophotography.  This is a flat disk with slots cut into it.  Here's a link to a Wikipedia page showing how this works:  https://en.wikipedia.org/wiki/Bahtinov_mask

I use a Gerd Neumann thread-on type (it screws on to the front of the lens just like a filter).  They come in different filter diameters (just like any other filter) but since most of my lenses are 77mm, I bought the 77mm diameter size and then use "step up rings" to fit it on my smaller diamter lenses.

The Gerd Neumann brand is a bit more expensive.  Actual price depends on the diameter/size, but to give you an idea, my 77mm size was $109 (smaller diameter are cheaper).

But Farpoint makes an unmounted filter that you snap in to an existing filter.  So if you already own a UV filter, you can just attach their unmounted Bahtinov focusing mask to the front of the UV filter.  This saves a LOT of money (the unmounted filters are about $12).

Using the filter, you can point to a bright star (such as Sirius - the brightest star in the night sky) and then carefully adjust focus until the diffraction spikes converge (which is how you know it's focused) and then remove the filter and start shooting (you can point the camera at any other part of the sky because the rule for astrophotography is that once anything in the night time sky is focused... then everything else in the night sky is also focused.)

There is one thing you didn't ask about but I should bring it up anyway...   exposure times and tracking.

If your camera is attached to a standard photo tripod and not tracking then the stars will tend to elongate due to the rotation of the Earth.  If you want star trails then this is no problem.  But if you don't want star trails then you either have to limit the exposure time OR you need a tracking head (or piggy-back the camera on a telescope mount that is tracking.)

To give you an idea of what you can expect, the following image was shot using a Canon 60Da and the EF 135mm f/2.0L USM lens at f/2, ISO 800, and is a 60 second exposure.  (this is the lower portion of the Orion constellation showing M42 (the Orion nebula - very bright at the right side of the frame), the "Running Man" nebula (just left of M42), the Horsehead nebula (near center of frame to the right of the bright star), the Flame nebula (just below the same bright star), and in the lower left corner you'll see what appears to be a fuzzy star but it's actually a reflection nebula named M78.) 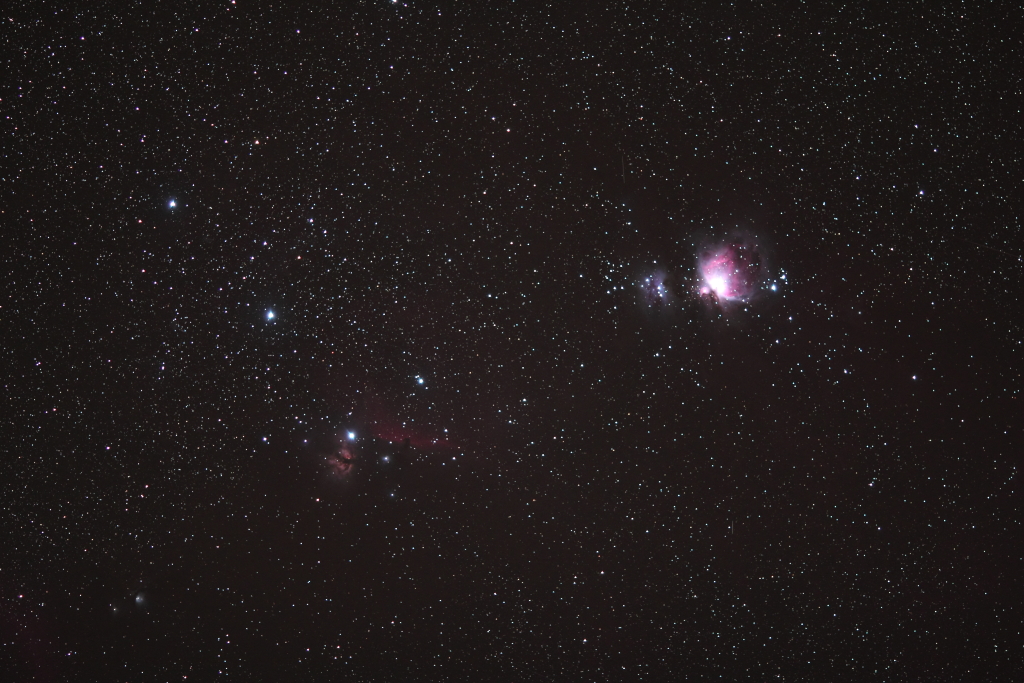 The lens was focused using the Bahtinov focusing mask (in my case it was the Gerd Neumann brand mask).

The maximum exposure time for a 135mm lens would normally be just 2.8 seconds and yet this is a 60 second exposure.  The camera was attached to a tracking mount which is slowly rotating at the same speed that the Earth is rotating (to cancel out the effect of the Earth's rotation and allow for a tack-sharp image.)  Tracking mount products include the Vixen Polarie, the iOptron SkyTracker, the AstroTrac, and the Losmandy StarLapse (I use the StarLapse -- which is the beefiest and able to handle the most weight, but also the most expensive.)

If you use a much shorter focal length lens, then you don't need to track the sky.  For example, with a 10mm lens you could take a 37.5 second exposure (you could probably stretch it to 40 seconds).  These are great for Milky-Way panoramic images (usually with landscape in the foreground.)

Thanks for all of the information, I've been reading everything I could to get up to speed. Basically just using a T3, a tripod and short <4 second exposure times and stacking in DSS. I'm sure there will be a tracking mount at some point, but this is just another section of photography I'm having fun with at the moment, lol.

But as far as the lens goes, it's the older non-STM 1.8 lens, and it happens after the first couple shots. It seems like the shutter actuating is enought to let the focus change if I'm looking up. My 18-55 kit lens worked fine along with my 75-300mm. Kit lens made it for 800 shots and still in focus, but I'd love to try the 50mm with all the light it can take in.

This sounds like something is mechanically loose inside the lens (excessive backlash) and vibrations are enough to let it shift.

When we focus catadioptric telescopes, the large primary mirror at the back of the telescope actually has to move forward or backward along a baffle tube to focus the scope.  Since the large mirror can move, it can also "shift".  So it's a common problem to "focus" and then start using the scope only to discover the mirror has settled and it's now out of focus again.

The technique to combat this is to deliberately take the instrument out of focus bringing the mirror too far "back" and then reverse the focus and push it forward so that it's more evenly supported from below (so we always finish the focus in the same direction.)  This means the mirror is basically pre-settled and shouldn't shift on us after we achieve focus.

You could try the same technique with your 50mm lens.  Focus the lens all the way past infinitity until you feel it hit the hard stop (that pulls the focus elements all the way back) then reverse and very slowly adjust until it comes back in to focus (this pushes the lens forward... but if the camera is pointed upward it should remain "settled" and hopefully wont shift after a few clicks.)

Having a sloppy focus isn't a good thing and ordinarily I'd say it needs to be serviced, but that lens is very inexpensive and the cost of service would almost certainly exceed the value of the lens (in other words it's probably cheaper to just buy a new lens.)

Ok, thanks again. I guessed that something was off with the lens and they would normally hold a focus, but thought I would check to see first. The lens works fine for everything else, so I will probably just try your technique or even the highly sophisticated "piece of tape" technique I've heard about. It still makes really nice long exposures.