Auto-suggest helps you quickly narrow down your search results by suggesting possible matches as you type.
Showing results for
Search instead for
Do you mean
Reply
Topic Options
SBK
Frequent Contributor

"I am more interested in knowing whether the zoom's image quality (*) matches the quality offered by the two prime lenses when comparing at the same focal length."

To satisfy my curiosity in the above mentioned quote, i searched some more at https://www.the-digital-picture.com and found the "Image Quality" tool, which gives answers to my questions.The prime lenses in the  comparison were 35mm f2 IS USM, 50mm f1.8 STM, and 85mm f1.8 USM (no IS).

You can go to the mentioned web site to check more if you're interested. I am posting what I found here so just in case anyone has similar questions than I had would know where to go to check.

As you can see in the screenshots below for the 85mm focal at f4, the prime lens easily beats the L-series zoom in sharpness and chromatic aberration (CA). I checked at other f5.6, f8 ... too. I did the similar checks at 35mm and 50mm. I found that the 35mm (with IS) also beats the zoom at same apertures. Only at 50mm f8 that the zoom seems to be equal or sharper than the prime lens at the center.

So absolutely speaking, the prime lenses still hold their advantages in term of sharpness and CA. For the prime lenses fans like me, don't get too excited until you read all the way to the end of this message. 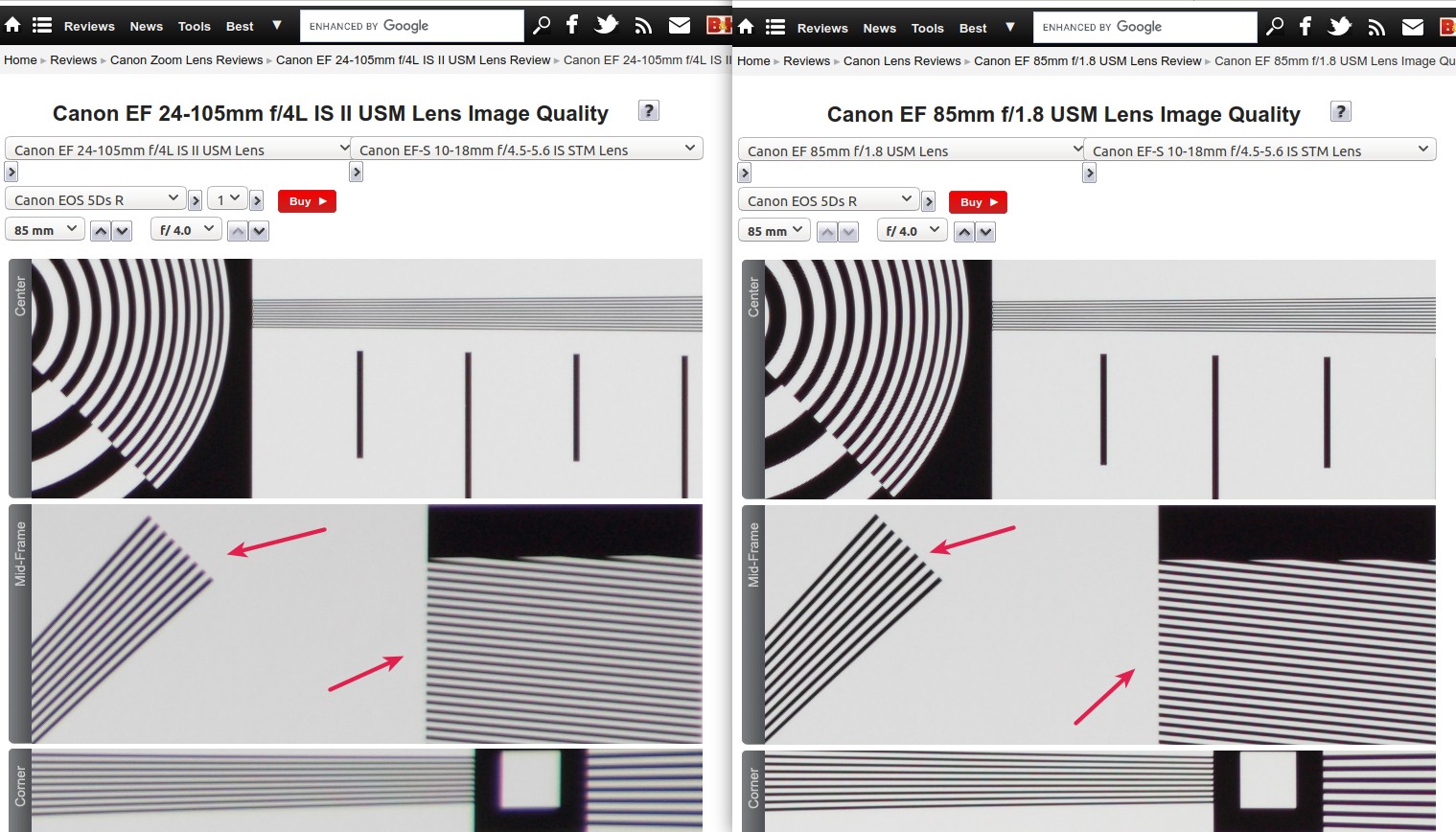 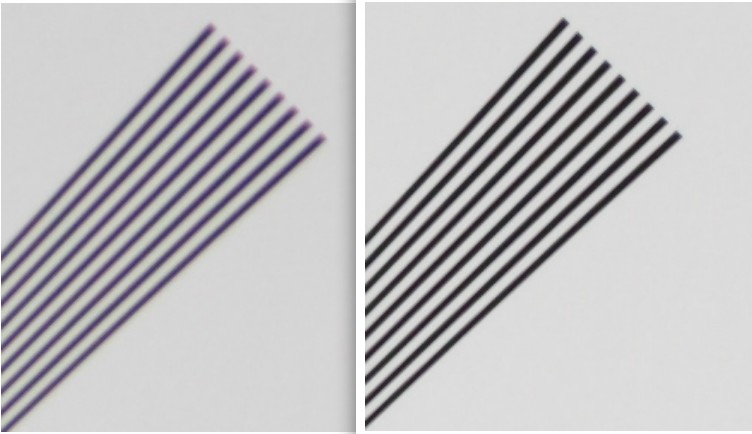 Personally, I still like the prime lenses for the above reasons and for offering a bright viewfinders thanks to their wide apertures. And if you had read the low-light condition in which ebiggs1 had to take his pics at the Kansas City Union Station then you understand why he had a 85mm f1.2 !! I personally don't like flash and enjoy taking pics in low-light condition as well, in that sense, I like the prime lenses.

For folks who don't want to buy the 24-105mm L-series zoom, it's still time to stop reading.

So, although the prime lens 85mm f1.8 USM seems to win based on the above demonstration, we need to be reminded that the above tests were most probably done in a lab with no cold wind and the camera was sitting comfortably on a tripod. In real life, I would be holding the camera with my hands and if there's a lot of wind and cold, my hands will shake. The bad news is the 85mm f1.8 USM features no Image Stabilizer (IS).

So at this point, while I am still pondering, but I am leaning more and more towards the zoom despite my preference for prime lenses.

The main reason I took my 85mm f1.2L is, it is the only lens in that FL I have at the present.  I have owned the ef 85mm f1.8 and the Sigma 85mm f1.4.  Both are good lenses, with the Siggy being the best.  In fact if sharpness is your main most goal the Sigma should be your choice.  I don't go by test charts done in laboratories. I never have liked them. I prefer to do the test myself in real use conditions. Usually turns out to be far different.

There is no lens made that compares with the ef 85mm f1.2L.  It is a fantastic lens. It is unique. I can not express how much I like this lens. Yes, it has its quirks so don't go down that road with me. But this lens is in a class of its own. I feel the same way about its sister lens too, the ef 50mm f1.2L. Love'em both.

The Union Station shoot was not how it was told to me,  Photo shoots rarely are. Non-photographers don't seem to know how conditions effect photography or how to describe them.  If you are in this business you need to know this and be prepared.  However, had I known exactly what the situation was going to be like, I would have taken my ef 70-200mm f2.8L along, too. My fault, but it happens even to us old guys. The bag I took only has a place for three lenses but that is an excuse not a reason.

The lenses I did take was the mentioned ef 85mm f1.2L, 24-70mm f2.8, and my Tokina 16-28mm f2.8. Flash was not an option and probably would not have worked or even helped at all. They were pleased with what I got so that's all that matters.

The reason Canon makes both zooms and primes is because there is prime lovers and always will be and there are zoom lovers. Not necessarily that one is better than the other because both have a purpose and place,

"I don't go by test charts done in laboratories. I never have liked them. I prefer to do the test myself in real use conditions. Usually turns out to be far different."

If I could justify to buy all the lenses, then yes, i would do my own tests too. But I can't justify buying them all.

For now, those charts satisfy my curiosity.

"For now, those charts satisfy my curiosity."

However, the conclusions may be and are faulty and incorrect a lot of the time.  This makes them almost worthless.  Plus probably the biggest testing lab doesn't reveal how they test. Or, at least they didn't as I don't read them any longer.

The problem here is many.  First the tests are done in a laboratory, not in the real world which can be quite different. Some testers have an agenda.  They may have a passion for Nikon for example. Although, my case is similar, but testers are testing a single copy of a given lens. That isn't sufficient to justify or condemn the entire model line.

In my case it isn't as expensive as it may sound.  I buy a new lens and use it for a while and I sell it on.  It is an almost new lens, mint condition, and is usually no problem selling it.  I keep all the paper work and box, too, which goes along. I see this as no different than other folks spending several thousands of dollars buying season tickets for the KC Chiefs for instance. It is my past time as is the game is for them. Of course, it didn't hurt that I worked for a large company that had every lens one could want at our disposal.

I don't know how many I have done but it has to be more than a hundred and more. I have around 20 currently. Sometimes I love a lens so much, I keep it. The ef 85mm f1.2L is one of those. As a side note the 85mm f1.2 is the exact same lens as the almost mythical Canon ef 50mm f1.  That's correct f1. The FL is the only difference. Most of us will never even see one of them let alone own one.

"The problem here is many.  First the tests are done in a laboratory, not in the real world which can be quite different. Some testers have an agenda.  They may have a passion for Nikon for example."

Yes, it's hard to find good and solid information nowadays, and that's why I try to be very careful with anything I read on the internet. At this particular website, the author recommends a few times the Canon line of lenses for many reasons and one example is shown in the screenshot below. Moreover, the comparison that I was looking at was between two Canon lenses. So in this case, I think there is no Nikon-bias interference here.

"Although, my case is similar, but testers are testing a single copy of a given lens. That isn't sufficient to justify or condemn the entire model line."

Unless we are part of the Canon Quality Control department, I don't think anyone would be able to buy let's say 20 copies of a given lens to do their tests.

"Of course, it didn't hurt that I worked for a large company that had every lens one could want at our disposal."

Yes, so you understand that for the large majority of us amateurs out there, we need to rely on others who have done the tests. We need to see if a test was done without bias or agenda. With a little perseverance, we could find good info.

"As a side note the 85mm f1.2 is the exact same lens as the almost mythical Canon ef 50mm f1.  That's correct f1. The FL is the only difference. Most of us will never even see one of them let alone own one."

Those two are dream lenses for low-light conditions, but the DOF must be so shallow that I would have a hard time to use them well.

"...the DOF must be so shallow that I would have a hard time to use them well."

This is true and one reason why they are such brilliant lenses.  Unique lenses.  You may have forgotten that even an f1 lens  has all the other f-stops as any 'normal' lens.  f1 or f1.2 is just one f-stop that most other lenses don't have and if you don't have it you can't use it.

"...  the comparison that I was looking at was between two Canon lenses. ... I think there is no Nikon-bias interference here."

The example of a person reviewing with a Nikon bias was simply one example. Another is, there are reviewers with a Canon bias, too.

Although the Canon moderators here may not like it, and they have been extremely tolerant (IMHO), I give bad reviews to Canon lenses, too, if they so warrant it. I have been pretty hard on the 16-35mm f2.8L zoom and the fact Canon does not have a 150-600mm super zoom offering.

For folks who may have the same question than mine, I found a partial answer to my question at the link below. It does not answer my specific question though. I understand that my question is kind of a corner case.

"The image quality of the Canon L lenses is generally as good as it gets. Contrast, sharpness, color, bokeh (background/foreground blur quality), flare, CA (Chromatic Aberration) ... All are excellent. Full Frame camera body owners will especially find L series lenses to be (on average) significantly sharper toward the edges of the frame compared to lesser lenses. "

On DSLR's L lenses are definitely among the best, but a few of Canon's EF designs are very good, like the EF 85mm f/1.8. The fact that it remained competitive for 30 years at such a low price point speaks to the talent of the people who made it back then. I guess there is a reason Canon has kept it in service, in 30 years the competitiion never came up with anything bettter.