Auto-suggest helps you quickly narrow down your search results by suggesting possible matches as you type.
Showing results for
Search instead for
Do you mean
Reply
Topic Options
Reanderthal
New Contributor

Why are my RAW dng files opening in photoshop as 8 bit?

I am shootng on the canon 5 D Mark II.

On other Mark II camera bodies that I used in the past, the dng files are 16 bit. Why are mine 8 bit, and how can I change it IN CAMERA to 16 bit (I know how to convert it in photoshop,)

If you're ending up with ".dng" files then you've got some software on the comptuer which is converting them.  How are you unloading your images from the camera and onto the computer?

I have to agree with Tim. You've got something running on your computer that's converting the CR2's to Adobe dng's.

"A skill is developed through constant practice with a passion to improve, not bought."
Report Inappropriate Content
Message 3 of 5 (6,978 Views)
Reply
0 Kudos
hsbn
Reputable Contributor

Even if it is *.dng format, in a way it should be acting like a RAW file. When you open it up in Photoshop, it will open up in the Camera Raw module (ACR). At the bottom of ACR, you'll see the option to open image as 8bit or 16bit. See below. 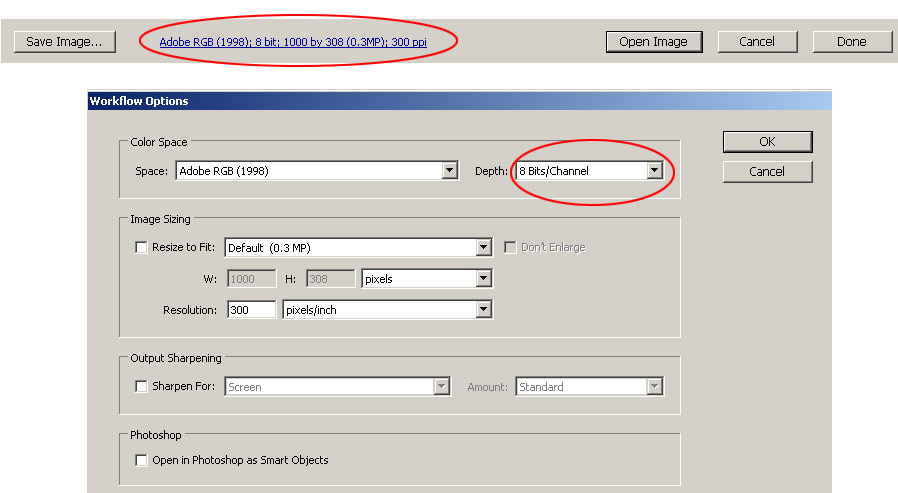 DNG is an Adobe standard which stands for "Digital NeGative".  Adobe supports the format and have also contributed it as an open standard (free to use, they provide free DNG converters, they also state that it's "royalty free" if you were a developer and wanted to include the standard in a product, etc.)

You can find more information on it (and download Adobe's own free DNG converter software) here:  http://www.adobe.com/products/photoshop/extend.displayTab2.edu.html

And while it's supported by several companies even outside Adobe, it isn't adopted by Canon or Nikon -- they continue to create files in their own formats (.cr2 for Canon and .nef for Nikon).

Are you using Adobe's DNG Converter or something else?

JPEG is an 8-bit format (there is no option for anything other than 8-bit if you shoot JPEG).

CR2 (Canon RAW) is a 14-bit format on your specific camera.

If you shoot RAW and copy the CR2 files to your computer, you've got 14-bit data (there is no option on your camera to change the bit-depth.)    There are options to shoot in alternate RAW formats such as S-RAW1 & S-RAW2 (don't use those if what you _really_ want is "RAW").

Canon "Digital Photo Professional" (aka "DPP") came on the media CD bundled with your camera and can open all formats that your camera can create... but 3rd party software wont necessarily support all the formats.  Everyone, of course, supports JPEG.  RAW is supported via RAW updates from the some vendors (e.g. Adobe provides RAW updates but usually only for their latest versions of software).   The S-RAW formats are often not supported by 3rd parties.

It looks like RAW support for the 5D II was added in Adobe Camera RAW (ACR) v5.2.  That was back in the days of Photoshot CS4.  If you have CS4 or later (or any version of Lightroom) and you keep up with the "Adobe Camera RAW" updates then Photoshop would be able to open the Canon .CR2 files from your camera in their native format and would not need to have them converted to ".DNG" format.

Canon DPP will allow you to convert your RAW files into TIFF (which is also a non-lossy format).