Auto-suggest helps you quickly narrow down your search results by suggesting possible matches as you type.
Showing results for
Search instead for
Do you mean
Reply
Topic Options
laney_norman
Occasional Contributor

Hi, I am looking for just some general tips for photographing a large family portrait.

Here is some information, I have a Canon EOS Rebel T3i with a EFS 18-135mm lens. I will be photographing 35-40 people for a family portrait. It will be in a larger field/trail like environment.

Looking for tips to ensure all members are in focus and I am able to capture some great family moments!

Lots of light, relatively small aperture (f/11 - F/16) and you on a ladder, or at least slightly elevated.

Take several shots and software like Photoshop Elements can combine them to open an individual's eyes if everything else looks good in the shot.

"A skill is developed through constant practice with a passion to improve, not bought."
Report Inappropriate Content
Message 3 of 6 (1,471 Views)
Reply
0 Kudos
ebiggs1
VIP

This a good idea to use for most shots that involve people.  Besides making a good looking crop, you are utilizing the best part of your lens. Take multiple shots.  Use Raw file formant and do post editing.  I'd start at ISO 400 but don't be afraid to change it if need be. If it is a nice day P mode will probably work, do not use Auto or green square.

All the advice you have received so far is good, if I may add that you want to recon and plan your space to take the photo - it will make a big difference.

If you can find a place with steps and a nice surround I would recommend that they offer an automatic stacking environment so that you can cut down the width of your shot and increase the depth (or if you will height).   I had to do a shot of a bunch of teachers and academics attending a conference and took them outside.  They had little time and didn't want to walk far from the conference venue but on looking outside - low and behold there was a set of steps!.

Now I would not expect you to put your family in such an architectural environment, but my people were academics and this was the univesity, so it worked for them, but you can see what you can do with over 100 people.  If you have elderly members, try to get something for them to sit on - they should be up front and they will be happier for somewhere to rest.  Up front is a good place for small carbon-based life forms too...

I was using a 24-105mm lens on a 5DMkIII camera (so Full frame) at a focal length of 35mm which will a bit narrower than the angle of view that your crop body with the 18-135mm lens will be capable of.  By the way I did use a wider shot and this is the cropped version of the image for use in their media. 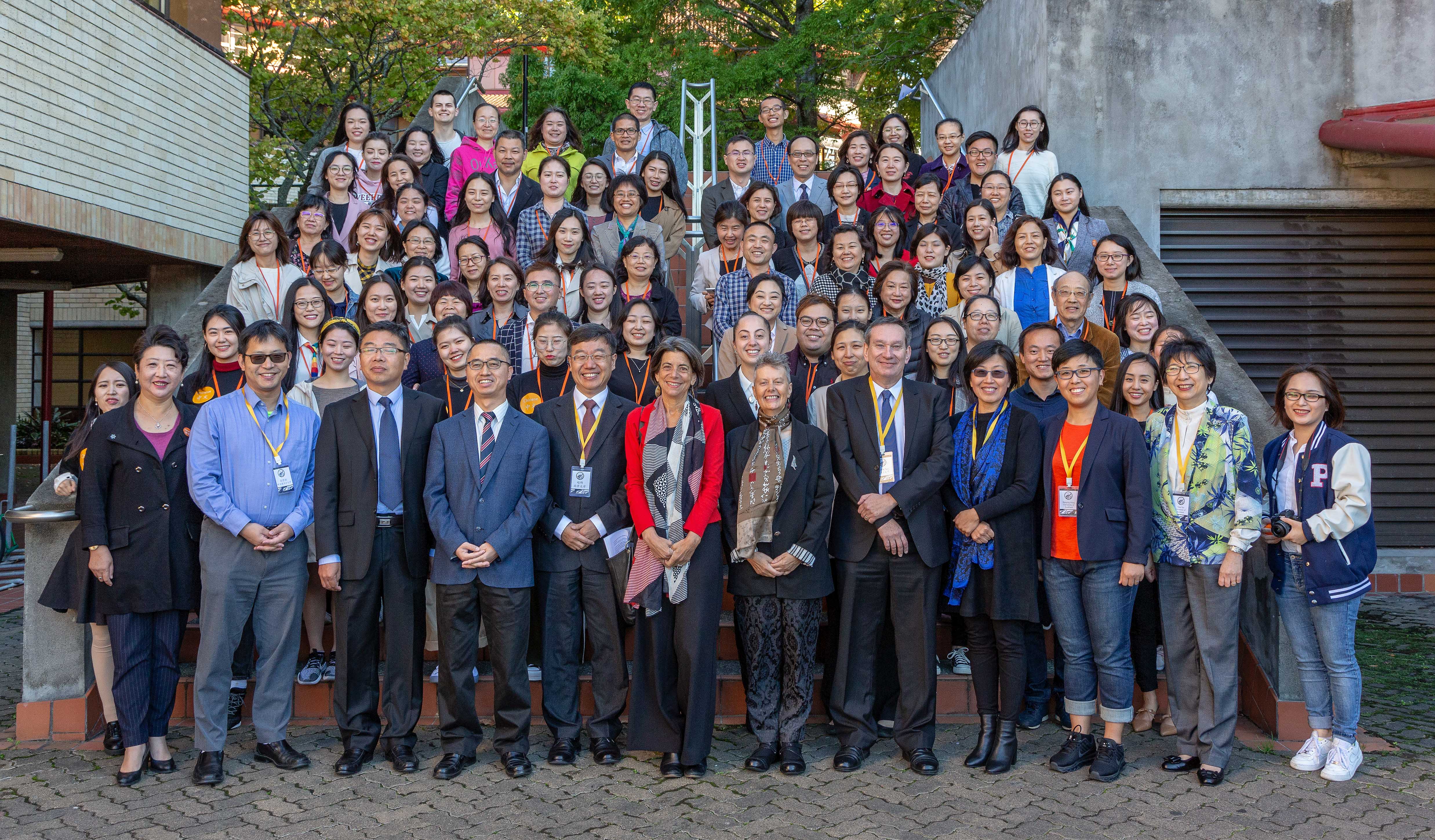 I would also avoid putthing them in direct sun - first of all you will get a lot of contrast and you run the risk of people squinting in the sun, wearing sunglasses or having facial contours or wrinkles stand out.  Organizing large groups is like herding cats  they don't tend to stay static for long.  One other thing I alway say to people in groups - they need to see the lens for the lens to see them.   I always take a bunch of shots because someone is going to be turned away, stroking their hair or taking a photo with their cell phone of you taking their photo.

As a favour I helped at a friend's wedding which took place in harsh sunlight and at midday.  They had a paid photographer who made them all stand in the sun and the results were awful - massive contrast, lots of eye and chin shadows and much squinting.  Mine, done in the shade came out way better thanks to the gentle and diffuse light.

One trick I use is to set up the shot and then say something like - "that's nice, just stay like that while I get a coffee"  It usually draws a laugh (you have to present it as a joke) and you have your first shot, after that it is usually easier.

To add to the great advice you have already received, YOU have to take charge of the group.  Don't create animosity but nature abhors a vacuum and if you don't take control, several people in the group will AND it will not be pretty.  I was recently a witness to one of these group shots that did not turn out well because the photographer started by not having things prepared before the group assembled, didn't take charge, and then became "bossy" in desperation trying to regain control of the situation which just irritated the people assembled for the photo.  Being prepared and knowing what you want to accomplish will allow you to smoothly guide the process without stress for you or the subjects.

Have your location chosen well in advance and arrange your lighting if necessary and make sure that your setup is ready to go.  Location is critical for so many reasons and one is that you don't want to have to deal with light of various color temperatures across the group which will make accurate color adjustment a very tedious task.  I prefer having large groups in evenly illuminated mild shade but whatever the light level make sure that it is as even as possible both in level and color temperature.

As noted, use a narrow aperture to ensure that depth of field is adequate and this also means making sure that the background is pleasing because it is likely going to be in reasonable focus in a large and deep group shot.  The DoF preview is useful for unexpected situations in the field but since you know in advance you are doing a group shot, use one of the handy DoF calculators to understand the aperture/distance/lens setup that you need paying particular to the point that DoF zone of focus isn't even to the front and back of the chosen focal point so remember this when you set up the technical part of your shots.  Allow yourself some leeway with DoF, better to have focus extending well in front and in back of the group rather than "fuzzing" the front or back row.

Photoshop allows you to correct for many deficiencies including background objects but you are so much better off when you start the process with a properly exposed and composed original image.

Remain calm and enjoy the process because your subjects are going to key off your behavior and emotions and if you grow testy they will also.