I recently bought a used 1Ds Mark III, mainly because I wanted a new battery for my 1D Mark IV.  The battery in the 1D Mark IV had begun to give me "calibrate" messages.  A battery calibration would [not] clear the message. 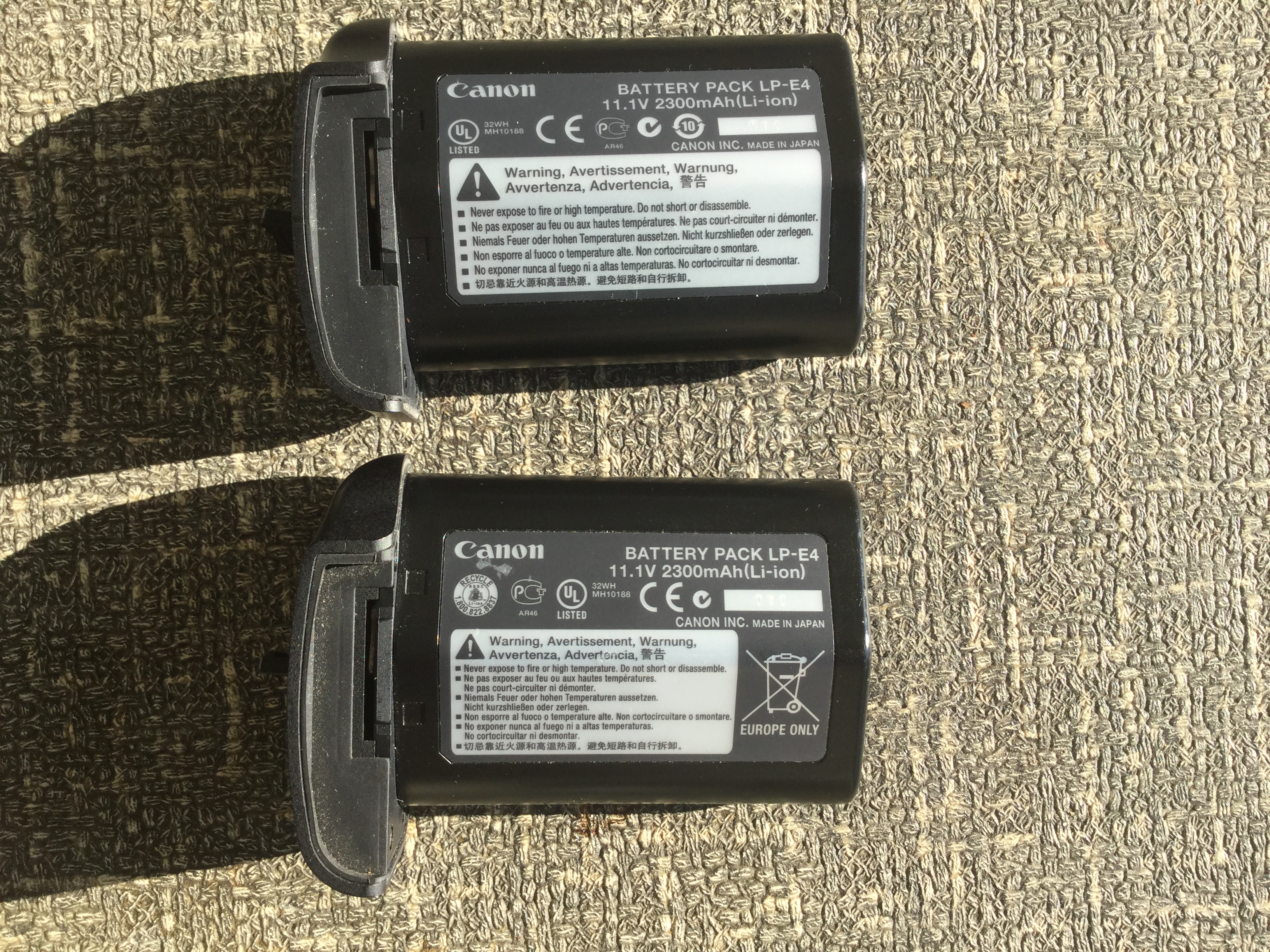 But, why are these batteries so diffferent?  Is one from a USA camera and one from a grey market camera?  I had bought both cameras used from reputable dealers.  The "bad" battery is actually a replacement they shipped to me because the original battery that shipped with the camera would fail to charge.

I really don't think the "bad" battery is counterfeit, but it is a possibility until this mystery is solved.  Thanks, guys.

I suspect the label change is something that happened over the production life of this battery.  My 1DX "no stripe" LPE-4N and later 1DX II and III LPE-19 batteries have labels that are similar to your "bad" battery (the LPE-4N used a  gold label to differentiate it) while the NP-E3 battery packs for my much earlier 1D Mark II have lables more in the style of your "replacement" battery.

That was my next question.  I know the LPE-19 battery should fit mechanically.  I did not know if the older chargers can properly charge it.

For less than the cost of a new LPE-19, charger, and AC Adapter, I picked up a 1Ds Mark III with all of the above accessories. It looks like I may need to still replace the failing LP-E4.  It keeps reporting that it needs a calibration.

"Doctor told me to get out and walk, so I bought a Canon."
Report Inappropriate Content
Message 3 of 5 (98 Views)
Reply
0 Kudos
Highlighted
Waddizzle
VIP

B&H still sells the LP-E4N, so I may pick up one of those.

BTW, the 1D Mark IV works just great with the WebCam Utility Beta.  I was totally surprised by that because it uses EOS Utility 2, instead of EOS Utility 3 like all of the supported bodies do.  It works great with my Rokinon 14mm T3.1 Cinema Lens, which has a very short hyperfocal distance, about 3-4 feet.

"Doctor told me to get out and walk, so I bought a Canon."
Report Inappropriate Content
Message 4 of 5 (94 Views)
Reply
0 Kudos
Highlighted
Waddizzle
VIP

So, after the time consuming process with using each charger, in turn, to calibrate my batteries.  I just may have a bad/weak charger.  I guess it was a good thing that I bought the entire battery and charger combo.  But, that was the plan, anyway.

I did it twice with each charger to make sure the suspect battery was good, and were consistent each time..  But, I will probably run the batteries down through normal use and do the tests again.  But, this time my eye will be on the chargers, not the batteries.

"Doctor told me to get out and walk, so I bought a Canon."
Me too
Report Inappropriate Content
Message 5 of 5 (43 Views)
Reply
0 Kudos