Auto-suggest helps you quickly narrow down your search results by suggesting possible matches as you type.
Showing results for
Search instead for
Do you mean
Reply
Topic Options
Highlighted
ebiggs1
Forum Elite

"This was my first attempt of astrophotography."

PhotoGerry, not bad for a first timer,

Nice job ebiggs1 with the overcast clouds coming in.

Mirror lock up is not important with shots like this and a 15-20-25 second exposure. Slight vibrations although not desired won't likely show up either.  However, you can't do anything that moves the aiming point of the camera or tripod. 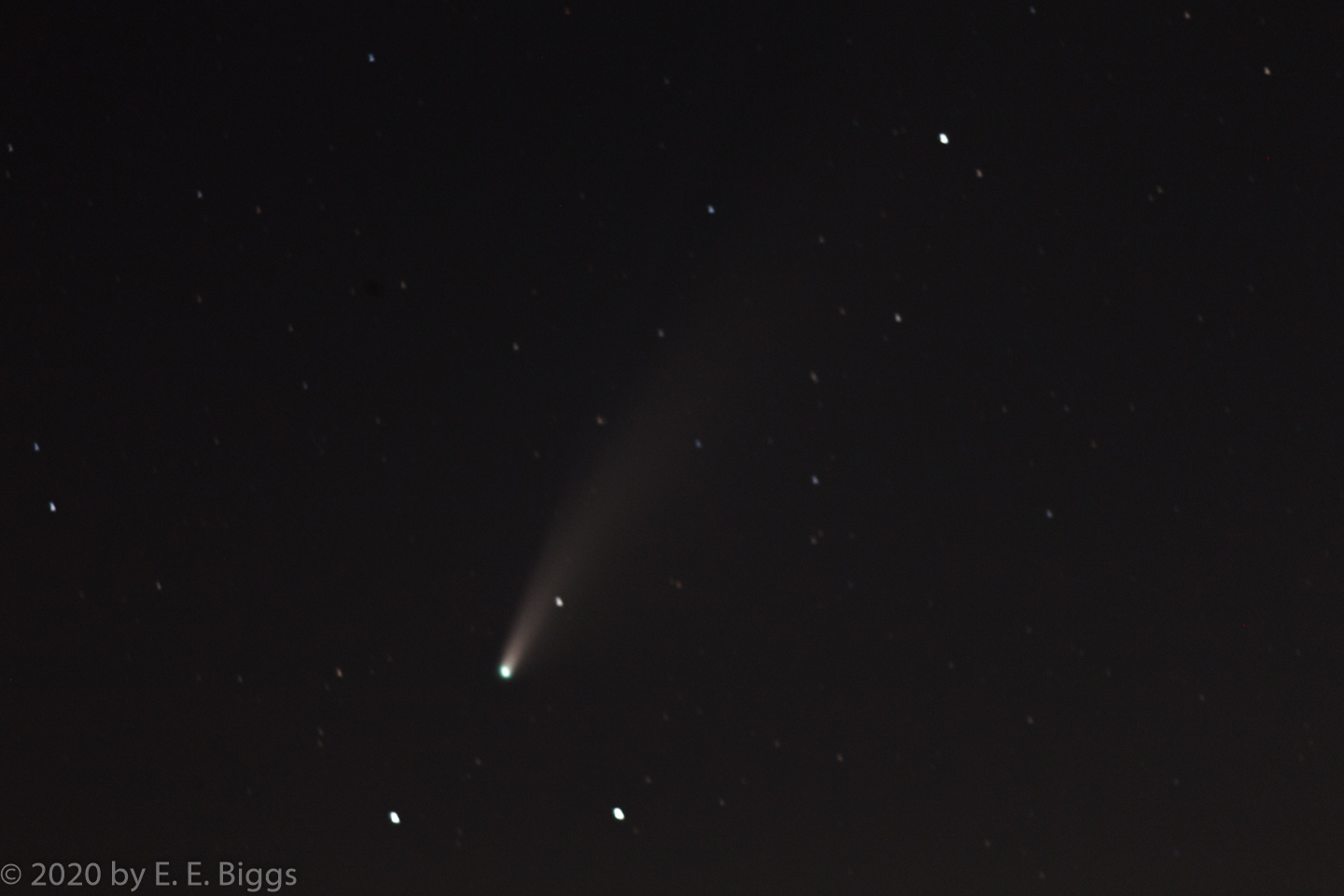 Clouds and the Moon can make cool photos. This is a four shot pano of the comet and lake.

Nice comet shot Mr. Biggs! I'm primarily a bird, insect, and flower photographer but I have tried a couple of times to get some sky shots. I used high ISO, faster shutter speeds, and the brightness and unsharp mask adjustments in DPP 4 on the RAW files.

I caught Jupiter at opposition last year and this past winter when the skies were clear here in north Florida, I tried to get the Orion Nebula. Considering my equipment, they turned out as expected, but not terrible. 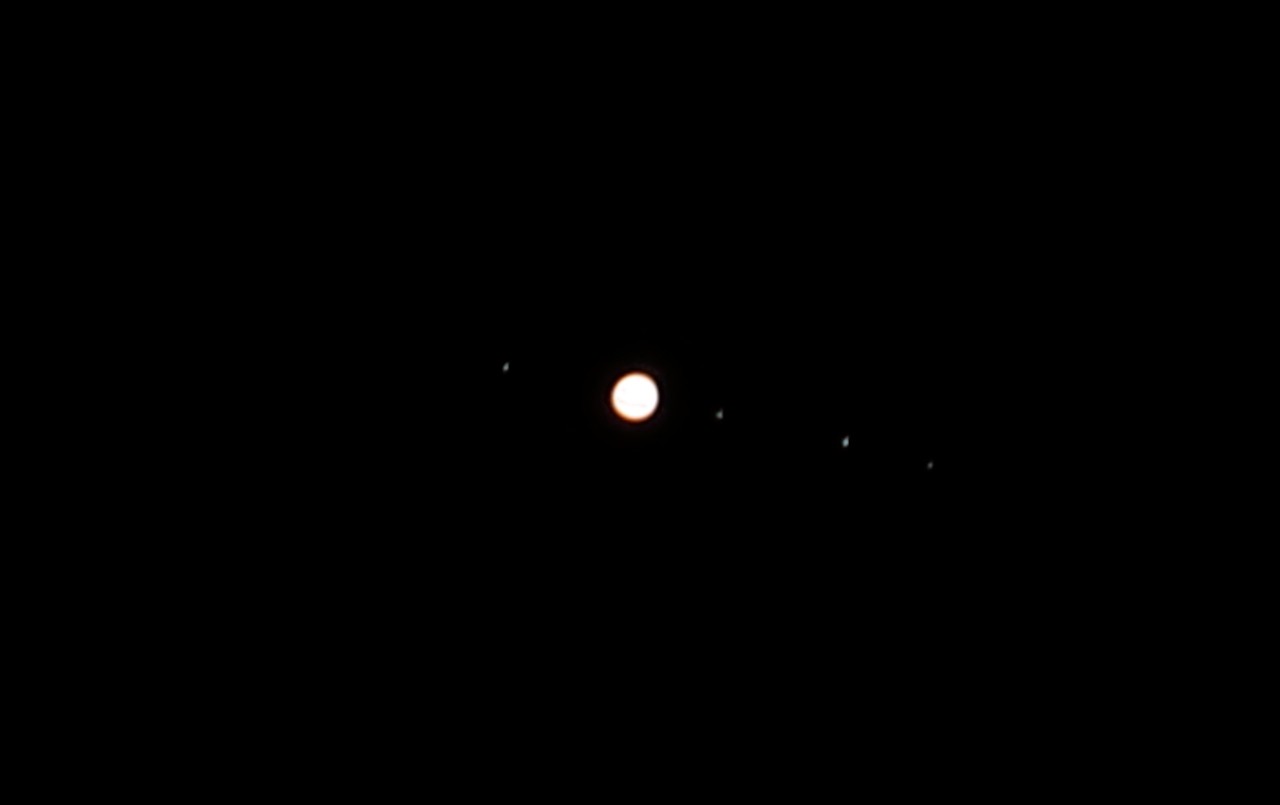 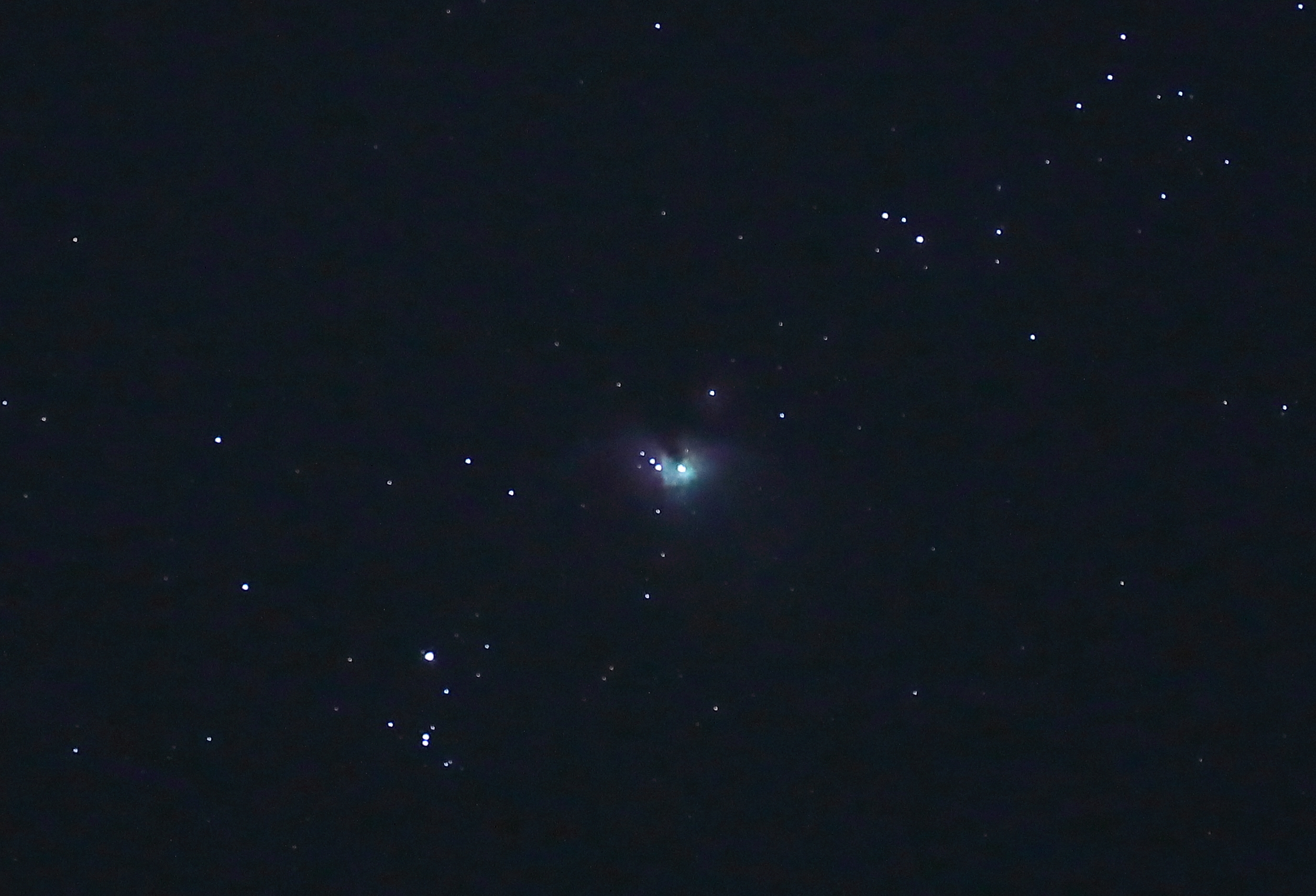 Looks pretty OK to me. Here is something to remember although it is night time and dark where you are, it is daytime on the places like the Moon and Jupiter and Saturn.

You can try a double exposure.  One for the stars and one for the 'whatever'. Then stack them in post.

No, I haven't tried Saturn but might give it a try this month or August, provided I get decent conditions. Saturn reached opposition July 21st, 2020 at magnitude +.8 but will still be that bright in the first half of August. The cool thing about Saturn, at this time, is its rings will be at an angle that make them brighter (the Seeliger effect). Jupiter, in the same time frame (and not far from Saturn in the sky), will be at magnitude -2.7. If you don't understand "magnitude", the higher the number, the dimmer the object appears, i.e., +4 is dimmer than -4. I am an astronomy enthusiast but mostly study "deep sky" objects like nebula, galaxies, star clusters, etc. I researched astrophotography, but it's just too expensive for my budget. Where I live (northeast Florida), the best time to shoot both planets is between 1 and 3 a.m. because they are at their highest points in the night sky and there is less atmosphere to shoot through. That is the time that I edit photos, so I am up, but usually don't feel like dragging my equipment out in the yard, LOL. Part lazy and part knowing I won't get the results I want.

I hope you get a chance to shoot Saturn, and if you have success please update us here

It is *much* easier to do these shots if you have a tracking head.  I use a Losmandy StarLapse, but Losmandy doesn't make that head anymore (it's basically the right-ascension drive from their GM8 equatorial mount -- used for astronomy -- adapted to fit on a photo tripod and hold a camera instead of holding a telescope.

These days the popular models are either

Both have good reputation.  Both are rated to hold 11 lbs (5kg).  Both companies *also* make a lightweight version that holds 5.5 lbs (2.5kg) but I don't recommend those ... they seem a bit weak to me and the cost savings isn't worth the frustration.

Expect to spend around $400 USD for one.

A nice sturdy tripod is also needed.  If you're a passionate photographer, you probably already have one (or more) of those.  I tell people "you want a tripod that is so heavy you'll need to see your chiropracter the next day".  That's an exagerration of course... but the idea gets through.  Cheap lightweight tripods are too wobbly for long exposure shots.

Just a couple of examples of long exposure images done on a tracking head: 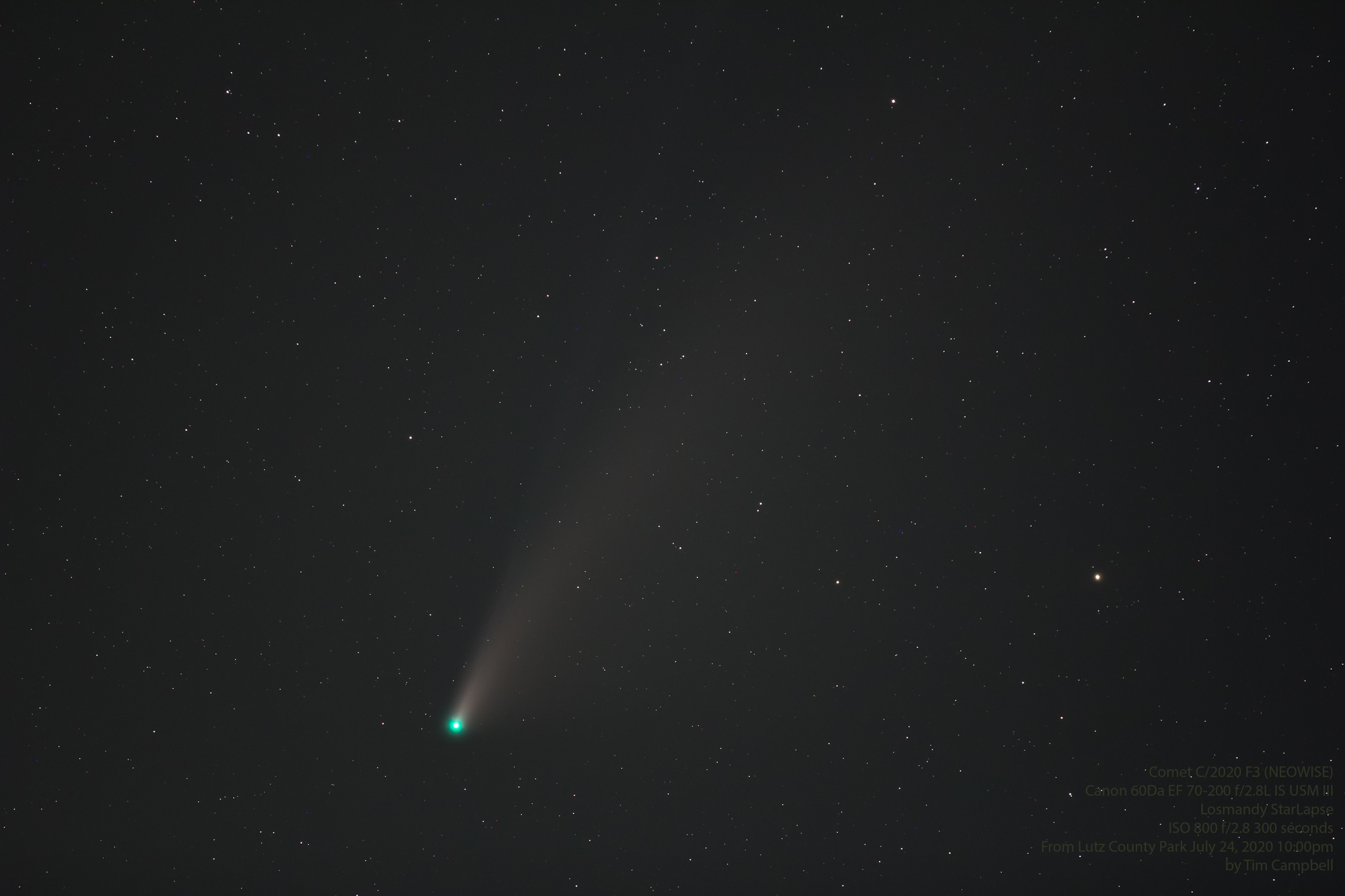 This region in Orion is an HDR with some images as long as 2 minutes, others as short as 3 seconds.  (This is because the Orion nebula has a very bright core but faint outer areas of nebulosity.  An image that captures the faint nebulosity blows out the core.)

This was shot using a Canon 135mm f/2L USM on a Canon 60Da.  The red sensitivity of a Canon 60Da is *much* stronger than a typical camera (it's the 'astrophotography' edition of the 60D).  A typically camera has internal filters which partially block the light to create a camera where the sensor mimics the sensitivity of the human -- so your pictures resemble what you saw.  An astrophotography camera tries to capture as many photons as possible... the internal filter is changed to a IV/IR block filter but it doesn't try to trim the reds down like a traditional digital camera.  It is roughly 4-5 times more sensitive to those red wavelengths than a typical camera. 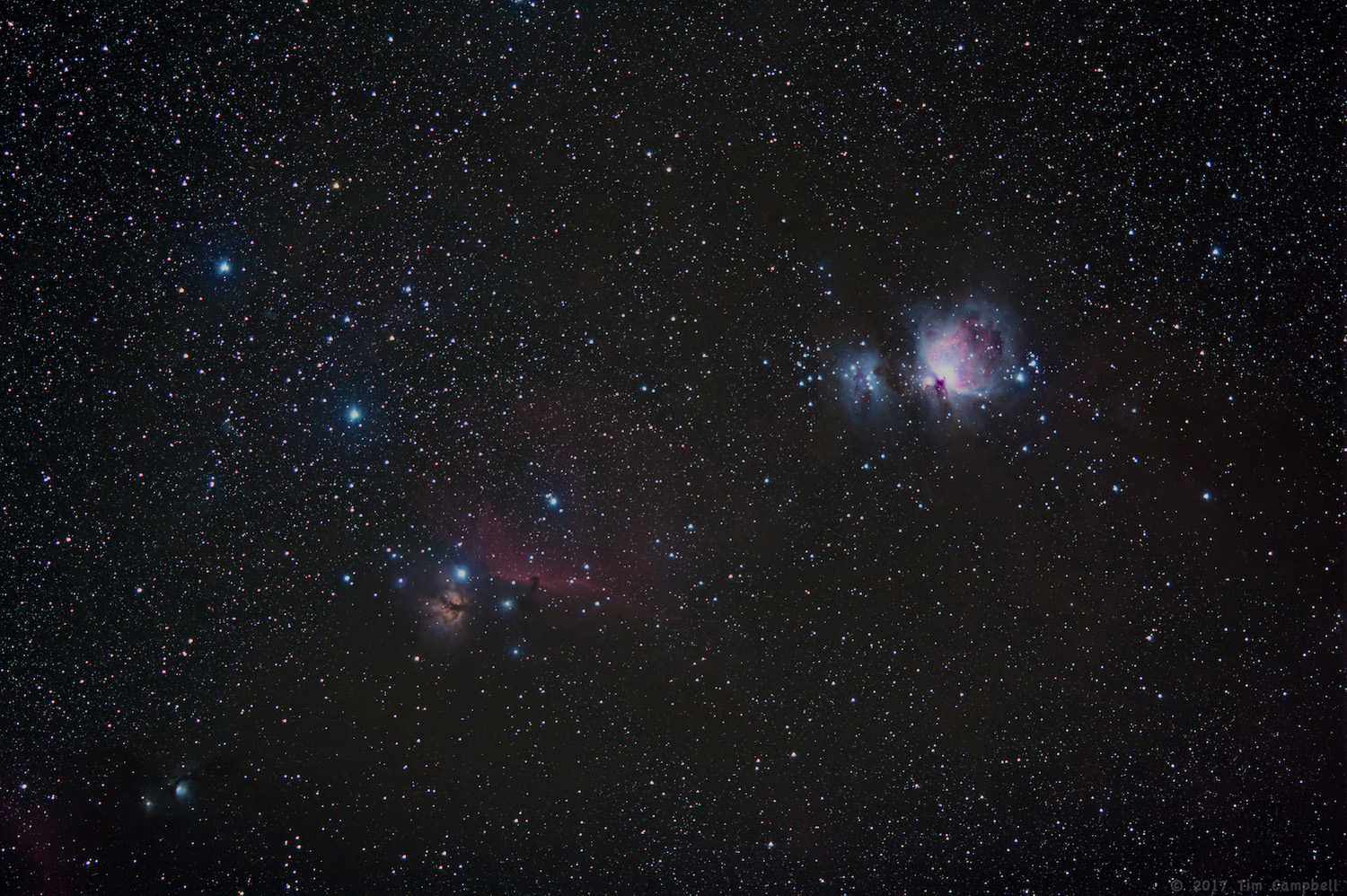