Auto-suggest helps you quickly narrow down your search results by suggesting possible matches as you type.
Showing results for
Search instead for
Do you mean
Reply
Topic Options
Edward1064
Frequent Contributor

For several years I have enjoyed photographing birds using my 60D and Canon 100mm-400 mm zoom (original version).  I thought that the improved, more sophisticated focusing with the new 7D would allow me to get better BIF photos.  Today was my first real test of the 7D, and I am unimpressed.  It seems as if the photos are no better than what I am used to getting.

i am shooting RAW, handheld.  Since I am using Apple Aperture to edit the photos, I did a check with JPEGs too, but that made no difference in my conclusions.  The 7D photos are no sharper than those with my 60D.

Am I expecting too much from the 7D?  Have I forgotten to set up something correctly?  For the comparison, I set the picture style for maximum sharpness, then did not shsrpen the photos when I edited them.

For several years I have enjoyed photographing birds using my 60D and Canon 100mm-400 mm zoom (original version).  I thought that the improved, more sophisticated focusing with the new 7D would allow me to get better BIF photos.  Today was my first real test of the 7D, and I am unimpressed.  It seems as if the photos are no better than what I am used to getting.

i am shooting RAW, handheld.  Since I am using Apple Aperture to edit the photos, I did a check with JPEGs too, but that made no difference in my conclusions.  The 7D photos are no sharper than those with my 60D.

Am I expecting too much from the 7D?  Have I forgotten to set up something correctly?  For the comparison, I set the picture style for maximum sharpness, then did not shsrpen the photos when I edited them.

The 7D2 may give you a bit more resolution than the 60D, but you probably won't see it unless you enlarge the pictures from both cameras. Compare them at 100% resolution and you may notice the difference. Beyond that, improvement in sharpness usually comes from using a better lens.

No you didn't miss setting something up properly and yes you're expecting too much.

And you're expectations may stem from the great number of people on many photo forums that buy a new camera then get on a public forum touting the greatness of the new model and how it just 'completely blows away' the model it replaced. When, in fact, the truth is exactly what you are expereiencing.

Fact is, most all recent DSLRs are extremely capable and, in the right hands, can and do produce spectacular pictures.

It was suggested above to look at your pictures at 100% crop. Who looks at pictures like that? No serious photographer does that. Enlarging to 100% is used to fix problems in post, not to look for problems.

Of course your pictures are good with the 7D, as they are with the 60D. And that would be because you know how to make great pictures. Those cameras are simply tools that enable a skilled user to make them do what they were designed to do. Put a Canon 500D in the hands of a talented and knowledgeable photographer and  a 5DIV in the hands of a rank amateur and guess who's pictures will be better. Its not the camera that takes a great photograph.

I too shoot a lot of birds. I use a Canon 6D, you know, the camera model with the really crappy AF system that has no ability to track anything moving (according to all the internet regurgitators)? Well, gee, it seems to work in a pretty stellar fashion for me. I manage to get published and I mange to sell my work. So my camera that has no ability to track moving targets does quite nicely for me, but its not entirely the camera. Just as it is with you.

Your pictures will always be good because you know how to go about it. So don't worry about the quality of your pictures, they will be great.......regardless of what hardware is in your hands.

For example... The 60D can be configured to let the camera auto-select the AF point from any of the 9... OR you can select the AF point that it will use.  That's it... no other choices on the AF point.  There is no tracking feature.  But you can configure the focus system to use either "One Shot" focus or "AI Servo" (continuous focus for moving subjects.)

But on the 7D II... things are considerably more advanced (which also means more techincal/complicated).

The 7D II has a 65 point AF system.  But in addition to have more AF points, it also has more ways to select points and it also has some advanced tracking features.

Canon has a 51 page guide book on JUST the auto-focus features of your camera.  If you haven't already downloaded and read this, you can get it here:  http://learn.usa.canon.com/resources/articles/2014/eos7dmk2_afGuidebook.shtml

For birds-in-flight, you should avoid using the AF "spot" mode.  That mode reduces the size of an AF point and it's used when you're trying to get pinpoint focus on something with high contrast.  For example... suppose I want to focus on your eyelash... but I want to AVOID focusing on your eyebrow.  An expanded AF point might see both and focus a little closer than you want.  But the "spot" mode reduces the AF point size so that the only thing on the AF sensor would be the eyelash.  But for moving subjects, the camera is going to struggle to focus on anything so small.

For birds-in-flight, I'd probably go for either "expanded" single point AF or "surround" single point AF... or you could even use the whole 65-point AF system with the iTR (intellitgent Tracking & Recognition)... but then you'd have to set the iTR mode.  Probably for BIF it would be either the versatle Mode 1... or possible Mode 2 (depending on the behavior of the birds).   If they're flying in a straight line, then I'd probably go for mode 2.  If they're flying is erratic then you might even look at other modes.  But read the guide to understand how the modes work.

The version II of the lens adds better image stabilization... the original provided about 2 stops worth of IS ... the version II offers 4 stops worth of IS.  So it's much better at dealing with camera movement.  But for BIF photography, you're likely shooting at high shutter speeds (not speeds that are lower than the minimum recommended speed to avoid motion blur due to camera movement.)

There's also a new third mode of IS.

Mode 1 is the general purpose mode.  When you activate the focus system, it also activate the IS system on the lens and it will try to stabilize for both horizontal and vertical movement.

Mode 2 is the "panning" mode.  When tracking subjects moving horizontally, this mode stabilizes the lens against vertical movement... but does not try to stablize against horizontal movement. 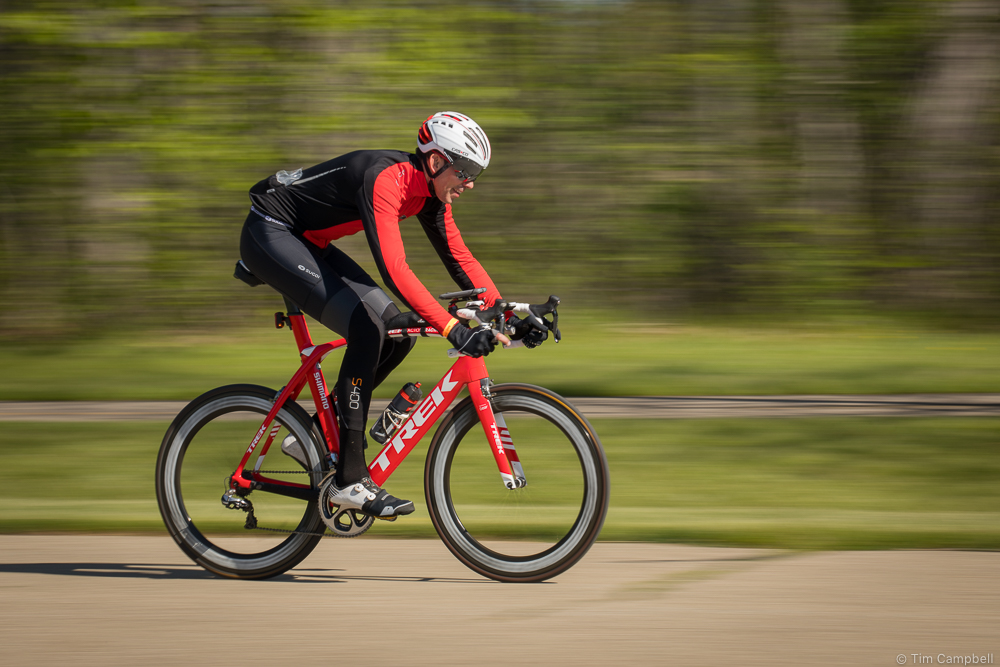 That's shot with my 100-400 vII using IS Mode 2.  Deliberately shot with a moderately slow shutter speed to blur the background and wheels and provide a sense of motion -- rather than a high shutter speed that would freeze the subject and let you count the spokes on the wheels which makes it look stationary.

But when doing this, I need to set the camera to high-speed burst mode because not every shot will have me panning the camera perfectly at the same speed as the subject.   So I burst, review my shots, select those sharp enough to keep and delete the rejects.

Mode 3 is like mode 1... except it doesn't activate the IS while focusing... it only activates the IS when the shutter opens.  The idea is that when you're tracking a subject in Mode 1, the lens IS system will "fight" you as you move the lens (making it harder to track and focus).  So mode 3 doesn't fight you... you can track and focus... but at the moment when you take the shot, the IS system activates for that fraction of a moment.

Since the birds are moving ... and likely so is your lens... you might even consider just switching the IS off.

If you'd like, post some samples ... but include the shot data (specifically all the data regarding exposure info, AF point, AF mode, and lens IS mode.)  You might want to post a full-rez image somewhere and just offer a link since shrinking the images to a size suitable for posting on these message forums tends to hide issues such as soft focus.

Both the previous answers are correct and wrong.

You do need to compare images at 100% when you have a mere 2mp difference.  People do crop their photos and some times it approaches 100%.  So they can be viewed at more than native resolution.

The 7D Mk II is a far more sophisticated camera in other ways beside image sharpness.

You bought the 7d Mk II for more than the idea of 2mp better sensor?  I hope!

The most helpful thing stated is, the better the lens the better the image.  Lenses are where it's at. For your next upgrade look at the new ef 100-400mm zoom.  You will see the difference. I guarantee it.

Thank you for your detailed post on camera and lens focusing. . . . Very useful comments.  I will download that Canon 51-page guidebook on the auto-focusing system.

To respond to comments from others, when I look at photo sharpness on my computer (Macbook Pro), I always do it at 100% expansion, so the computer is not adding artifacts.

Thanks to your recommending that 51-page manual on the AF of the 7D II, I have settled down and now understand more about how to get the most from my new 7D.  And now, 1 week after unpacking the new 7D, I seem to be getting better BIF photos than with my trusty 60D.  Lesson: relax, get acquainted with the adjustments, experiment, and repeat.  And I'm yet just getting into understanding this camera's potential.