Auto-suggest helps you quickly narrow down your search results by suggesting possible matches as you type.
Showing results for
Search instead for
Do you mean
Reply
Topic Options
Highlighted
limvo05
Super Contributor

How to take photos of the blood moon?

Wondering if anyone seen the moon of late? Not sure if it has anything to do with the fires near by, but the moon certainly look amazing. That said, I am curious what would be the best setting to take photos of the moon? I've tried manual as well as auto settings, nothing seems to work properly. I am using the 5Ds and 20-700 MK2.

The place to start is the Looney 11 Rule.  It says with f11, SS 1/100 and ISO 100 you will get a good Moon shot. Of course it is just a starting point.  As always you should bracket each way several stops.  Bracketing is your friend.

There’s a basic guideline for shooting the moon... and there’s a more complex formulat that works out what happens when the moon (or any celestial object) is near the horizon.

That’s the real name... I didn’t make that up.  Looney being a play on Lunar.

You’d think you could use that rule, but it turns out the moon isn’t highly reflective.  Only about 1/8th of the light that hits it (about 12%) reflects back.  It’s roughly the reflectivity of an old black rubber tired (turned gray) or a worn asphalt road (not fresh).  Also, you’re shooting thorugh the Earth’s atmosphere.  A typical subject we shoot could be anywhere from a few feet to a few miles of air between the camera at the subject.  For the moon, it’s the height of the entire atmosphere.  Dust particles, moisture, and other scattering effects slightly dim the moon and all in, you need to add just about 1 full stop of light (going from f/16 to f/11 is one full stop of aperture).

So the Looney 11 rule says that if you set the aperture to f/11, then you’ll get the correct exposure if you set the shutter speed to the inverse of the ISO (e.g. at ISO 100, use 1/100th sec.). Most people tend to over-expose the moon by trusting their camera.  The “problem” is the camera sees all the dark sky around the moon and assumes it needs to increase the exposure to find the details in all that blackness.  So really you want to exposure *just* for the disk of the moon (e.g. if you used spot metering on the surface of the moon only, you’d get a better exposure than you would if you let the camera use it’s default ‘evaluative metering’ which tries to sample most of the frame.

If I could offer one single piece of advice... it would be to (a) know the Looney 11 rule and (b) use “spot metering” to meter the disk of the moon.

But be careful with (b) because that’s really only going to work well if your lens has a long focal length (short focal length lenses will meter more than the size of the sun itself and average in a lot of the background black sky resulting in an over-exposure.)

But you mentioned you thought possible the moon was a bit more red due to smoke or other effects that alter the transparency of the air.  This effect is called “extinction”.

The concept of “extinction” is simple... but the rules to determine it are very very complicated.  You can do a search for “atmospheric extinction” to find articles that will go into detail.

But the simple idea is this:

If you are at sea level then the amount of air directly above your head (drawing a line straight up to the top of the atmosphere) is 1 air mass.

The atmosphere is mostly transparent... so this doesn’t really effects the exposure in any meaningful way (unless the air is really loaded with things making it less transparent ... dust, smoke, water vapor, etc.)

It turns out, if you had no trees or buildings on the land and had a perfectly flat view to the horizon... and looked at a “star” that was just at the horizon line... you’re looking through about 40 air masses (and that *does* add up in terms of impacting your exposure in a very noticeable way).

The complicated bit is that there no set rule in terms of how it impacts exposure because it really depends on the transparency of the air... and that varies.

If an object (such as the moon) is more than about 30° above the horizon, the effect is small.  But the closer it gets to the horizon, ithe faster it ramps up.  When an object gets below 10° above horizon, it starts to ramp up quickly... and below 5° it gets quite extreme (this is why, as the sun kisses the horizon at sunset, there’s a very noticeable difference in brightness from the bottom of the sun to the top of the sun and usually the sun is heavily distorted.)

The place to start is the Looney 11 Rule.  It says with f11, SS 1/100 and ISO 100 you will get a good Moon shot. Of course it is just a starting point.  As always you should bracket each way several stops.  Bracketing is your friend.

Notwithstanding the Looney Rule, why would anyone ever use f/11 to photograph the Moon? You're focused at infinity, so depth of field is not a consideration, and the subject is moving (slowly, but at the highest magnification you can manage). So why wouldn't you use the widest aperture at which your lens can give decent results, in order to maximize the shutter speed? And why, with any modern camera, wouldn't you use an ISO setting at least three stops faster than 100? No doubt the answer is incorporated in "it is just a starting point". but the rule as stated sounds like an archaic relic of the Plus-X era.

This rule is the same as the Sunny 16 rule... a way to know the exposure without needing to use a light meter.

Both rules are used because the simple inverse relationship with ISO... and given a catchy name so they’re easy to remember.

"No doubt the answer is incorporated in "it is just a starting point"."

Yes it is Robert, and do not doubt the benefit and necessity of bracketing.  It is an exposure, in toto, that can be modified but it gives you the "starting" point.

The first image was shot at f/10 for 8 minutes: 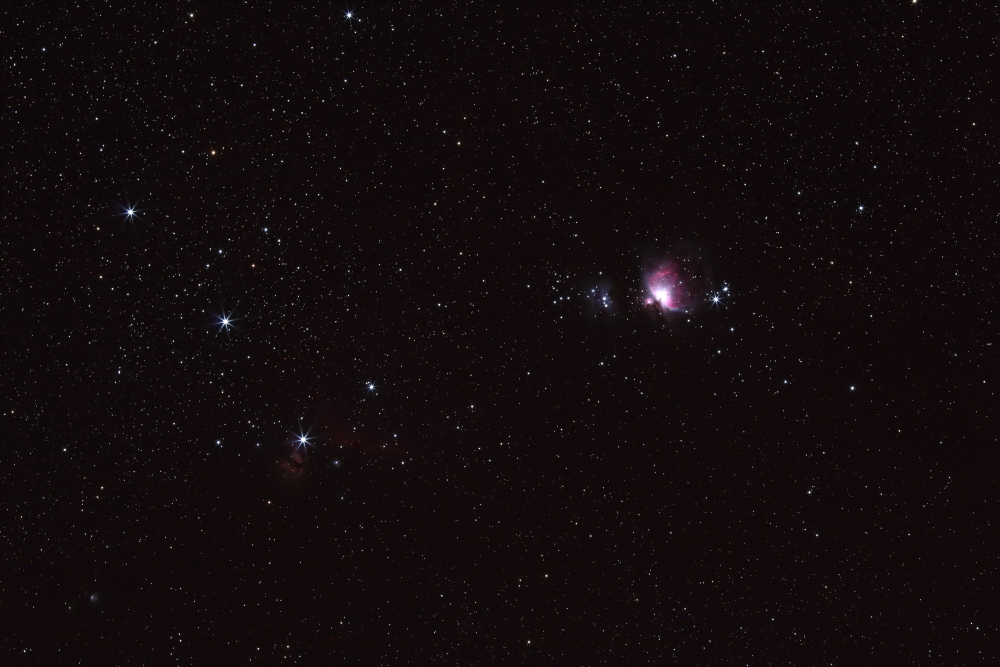 This second image was shot at f/2 but for 1 minute: 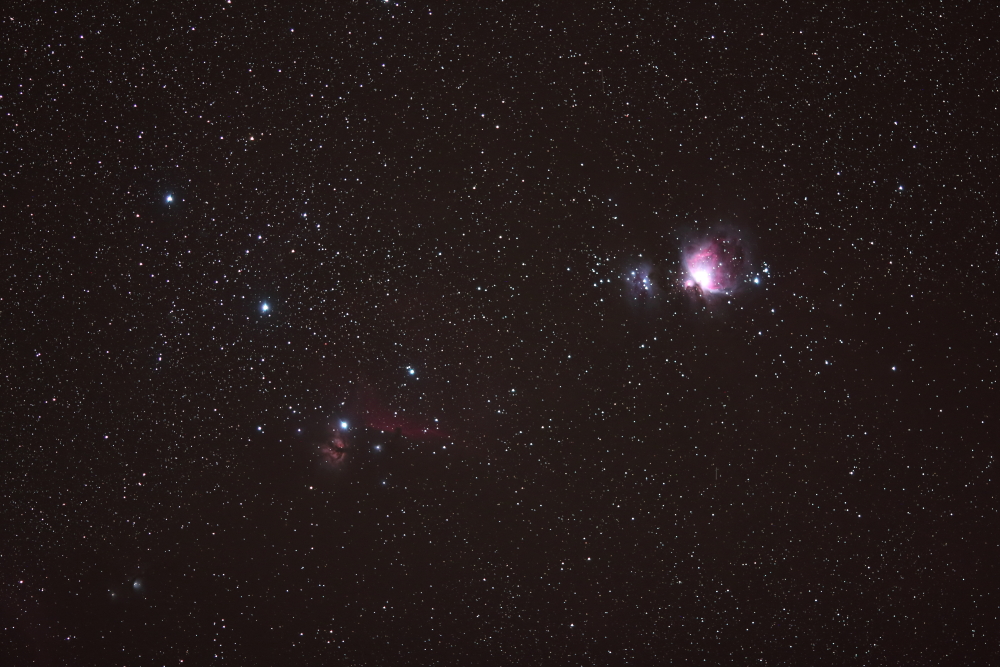 Both images used ISO 800.  They aren't equivalent exposures (the first image was a test shot to test tracking - to take an 'equivalent' exposure would have required about 25 minutes and I wasn't going to wait that long) but what I really am trying to call attention to are the three brightest stars on the left side.

In the first image, the stars are sharp, but at f/10 we're getting noticeable diffraction spikes from the aperture blades.

In the second image, those brightest stars are a bit bloated and showing some saggital distortion.

Stopping down just a touch ... maybe to f/2.8 or f/4 ... would have really helpd reduce those distortions in the brightest stars (the dim stars don't have a problem.)

I sold my Canon EF 135mm f/2L USM some time ago in favor of the 85mm f1.2L.  Your shots make me want another 135mil.  They always were great lenses even way back in the FD days.

Curious what focal length is best for taking photos of the moon? I used 70-200 @200mm and the moon came out pretty small.

You can figure out for yourself how much of the area the moon will take up, since it is about 1 degree.

200 mm will double those fields of view.