Also... what exposure settings are you using?

You can find recommended settings here:

ISO should be at either ISO 100 or ISO 200.  There is no reason to shoot with higher ISO and doing so would certainly contribute to image noise.

It is normal to see more noise in a RAW file than you would see in a JPEG file.  The RAW has more data and does not apply any noise reduction (JPEG processing does apply noise reduction).  But the noise is easily handled by the computer when the images are post-processed.  Many applications that deal with RAW images will automatically handle that when the they open the image.

Thanks for the info so far. I did the cap on test and found no noticeable pixels so thats good. Now I wonder about sharpness. It seems the only way to get rid of the glow around the sun is to keep the exposure lower such as around 70% of white or maybe a stop down in exposure. This latest pic still shows the subtle glow and you can see all the settings there. Thoughts? 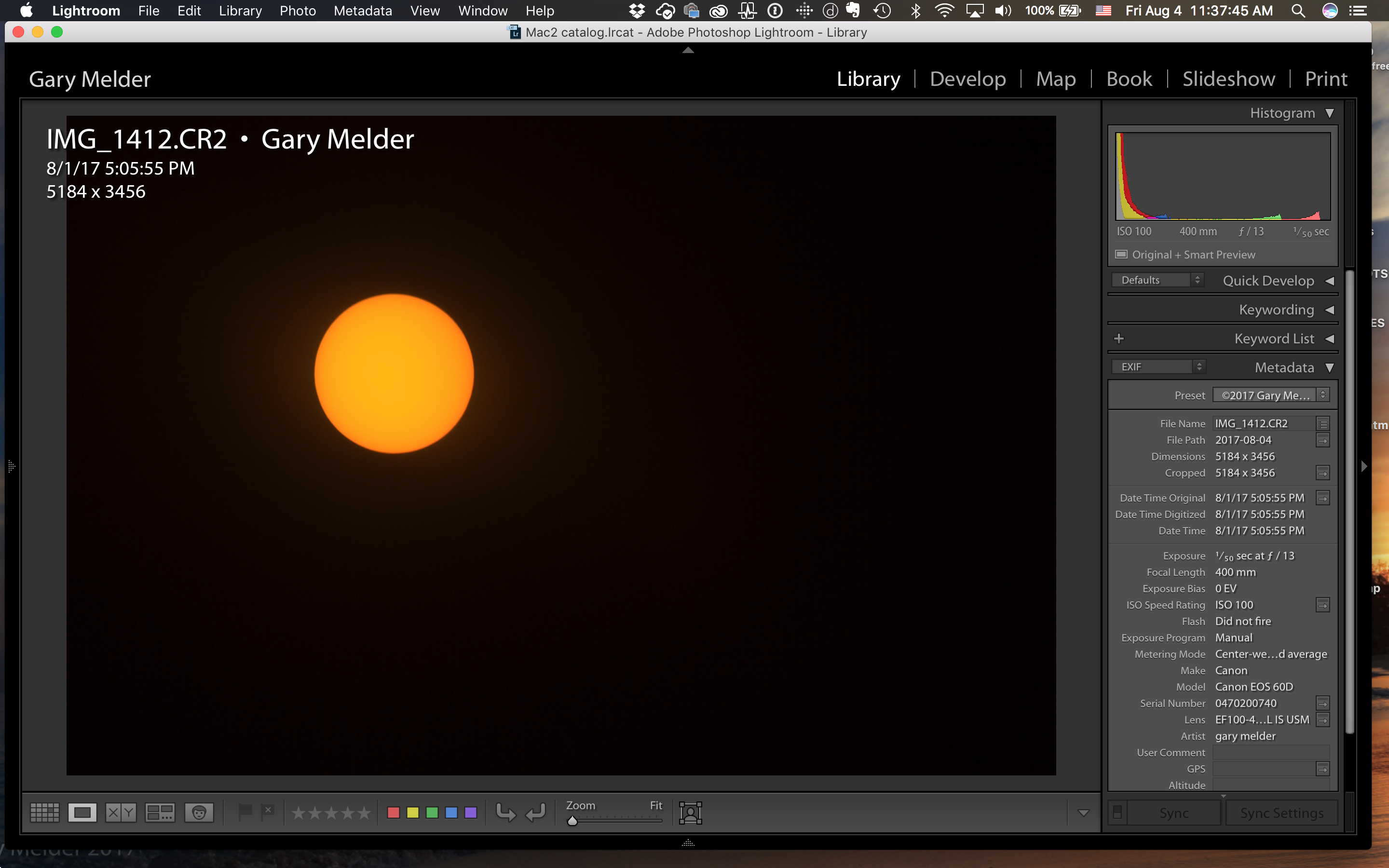 What you want to watch is the histogram.  In your attached image, Lightroom is displaying that in the upper right corner.

Lightroom is overlaying the red, and green, and blue histograms in the same box.  The filter you are using isn't technically a true "neutral" density filter because it trims more blue than red.

The sun's true color is nearly white when viewed by human eyes and non-astrophotography cameras have a filter that trims the light transmittance to match that of human eyes so that our photos actually come out looking like what our eyes saw.   However, our eyes aren't actually nearly as sensitive to red as they are to green.

You can see that your filter is allowing more "red" through than anything just by looking at the historgram and you see the red are makes is most of the way over to the right edge of the histogram graph.  You want to make sure the data never touches that right-side of the graph.  If it does, then you have over-exposed and want to reduce the exposure.

The exposure guide I linked is by Fred Espenak.   Fred is a retired NASA phycicist with a specialty on the Sun.  He's the person who has been doing NASA's eclispe predictions for years and that includes this upcomming eclipse (even though he's retired, he still does it.)    You'll frequently see his name credited in the corners of the maps showing the ecipses and that's because they're giving him the credit for having worked out the precise math that determines where the path will be and when.

He's also an avid eclipse chaser and eclipse photographer and he's photographed a LOT of these things.  He's got books and articles on how to do it.

So the article I linked is by the master... when the master tells you what exposrues work best for each type of phenomena during the ecipse... you you shoudl take his advice.  He's done dozens of eclipses and I've done exactly... zero.  So everything I know is based on following his advice (he came to speak at a major event last year, we took him to lunch, and he happend to pick the spot to sit at lunch right next to me.  So OF COURSE I took the opportunity to ask as many eclipse photography questions as I could.  ;-)

Follow the link, check the recommended exposures.  Verify that your filter actually does have the density it claims to have by using the appropriate exposure for your filter and then verify that your histgram shows nothing is clipped or blown out (well... the blackness of space behind the sun will probably be clipped in black on the left edge of the histogram graph.  But the background of space is supposed to be black, so while that might indicate under-exposure for a traditional photograph, we recognize that it's expected for a photo of the Sun.  Hence we are more concerned about not clipping data on the right edge and don't have to worry about the left edge.