Auto-suggest helps you quickly narrow down your search results by suggesting possible matches as you type.
Showing results for
Search instead for
Do you mean
Reply
Topic Options
Highlighted
mjroddy
Occasional Contributor 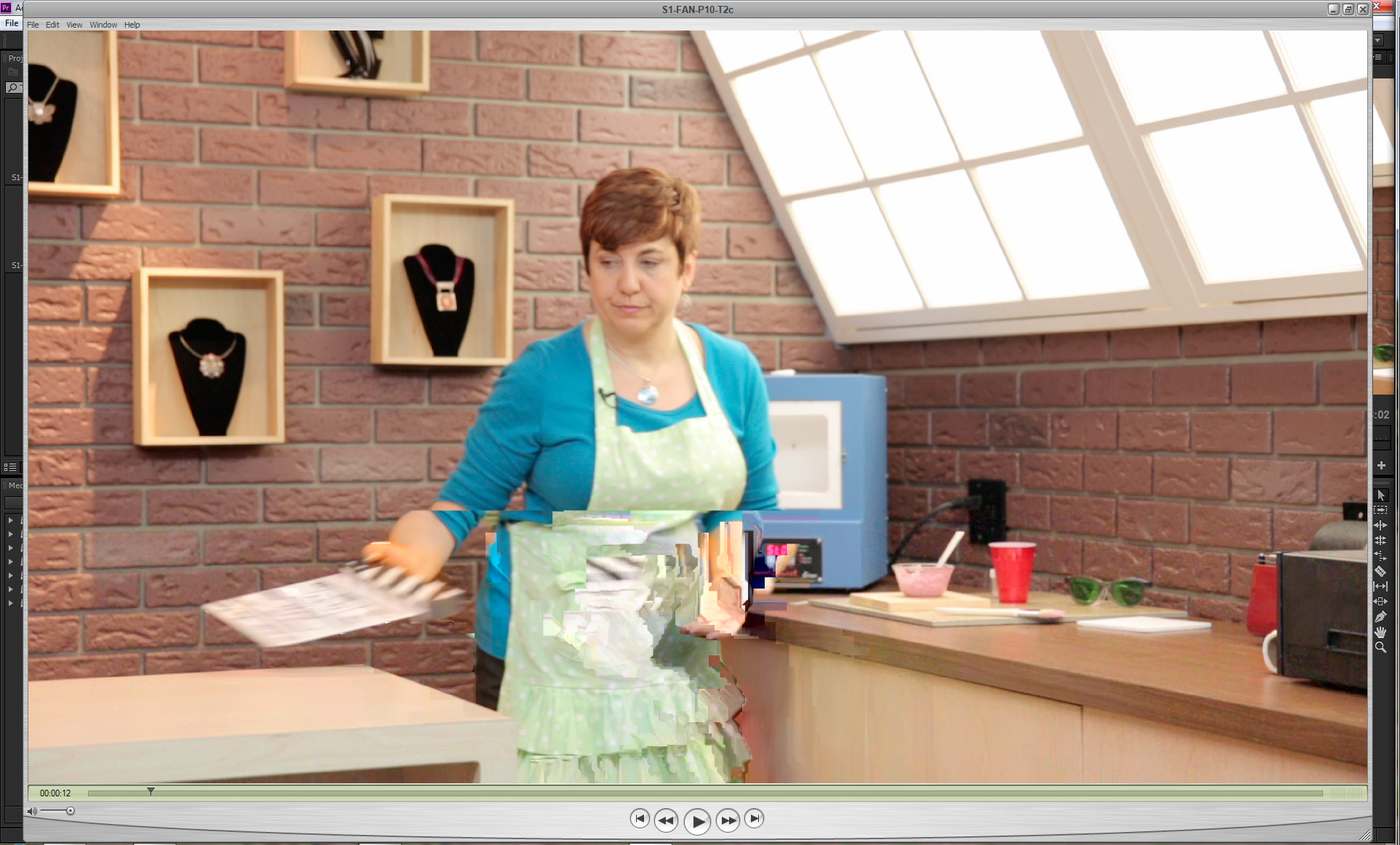 Sorry for the dramatics...
My camera, my lovely Canon 5Dm3 is randomly and occasionally inserting nasty dropouts. I didn't even know that was possible on solid media!
I'm using Transcend 1000x CF cards, but periodically, I get a really nasty glitch that ruins much of the take.
I couldn't figure out how to embed or attach an image here, so I put an example of my take-ruining glitch up here:
http://matthewroddy.com/5d3/5dm3-dropout001.jpg (please don't mind that this take is out of focus, that part doesn't matter in this part of this take).

I was using IPB 1920p24.
The glitches are all over several takes. Most, in fact. But I can't find anything consistent that might help me understand something *I* may have been doing wrong.

What's additionally odd is the glitches appear different depending on how i'm viewing them: QT, WMP, PremierPro CS6, etc.  Each give a slightly different twist on the glitch.
Does this bit of badness mean a bad sensor, bad media, bad processors, or what can I possibly do about this?

SLIGHT update:
I just spent over an hour with Lexar's LiveChat (Yes! they had LiveChat open on a Sunday! Good for them!) and they suggested something I'd never heard of:

The reason, they say, is that the formatting process in the camera doesn’t do a thorough job, and it can leave bits and pieces of data. Strangely, that’s exactly what it SEEMED was the problem with SOME of the files! I’d get a splitscreen where what’s happening on top isn’t the same as what’s happen on the bottom. Very odd!

This is counterintuitive to what I was “taught,” but this comes directly from Lexar.

They may be trying to invoke the remapping technology of the formatting process.

Solid state memory can be "read" an unlimited number of times with no "wear" to the media, but a "write" is a destructive process.  Each time you "write" to a location, the operation technically damages the location (very slighlty, but it does.)  Normally an individual location should be able to handle tens of thousands (perhaps even hundreds of thousands) of writes before it goes bad, but you can have random locations that go bad significantly sooner than others.

Original flash media didn't use "memory leveling" and that meant the some memory locations were used much more than others... think of magnetic recording tape where you are recording music of different lengths... the tape at the beginning of the reel is always being re-written, but the last tiny bit of tape on the real is almost never used.  The same concept applied to early solid state media.

If a location is actually going bad, a low-level format should hopefully pick it up.  A high level format doesn't actually write to every address on the card and zero it out... it merely declares all space to be free.   A low level format is supposed to "test" each location on the card by performing a write operation to make sure it actually works.  I suspect the camera's built-in "low level" checkbox on the format option doesn't _really_ do a low-level format because it all happens FAR too quickly to have technically tested every location on the card and I think THIS is why they suggest formatting on the computer.

In any event, if it detects a bad location, it typically does not notify you, it simply marks it as a bad location so that the card will never attempt to write to that location again... and moves on.

So my guess is they're trying to do a few low level format cycles to get the offending bad location(s) marked as bad so that the card will stop using any marginal memory locations and behave as expected again.

BTW... both physical hard drives as well as solid-state memory both have bad blocks or bad memory addresses even when brand new.  But the formatting process is supposed to identify and mark those locations -- using alternate locations instead.

Thanks very much, TCampbell.  I appreciate the info.  I think that may help.

My real problem is that I am getting drops (either 1 single frame or a full half-second-ish) ever 5-10 seconds!  It's maddening as... well, I'll leave the vulgarity in my head.

Fortunately, I'm often able to cover it up with b-roll from other cameras.  And when it's a single frame, I just copy the previous frame and paste it over the offending frame.  Such nonsense.

I'm so buried in post-production, I haven't been able to test the camera and card!

Anyway, enough of my problems.  Thanks again for your detailed exploitation.

If it's happening at regularly timed intervals it almost sounds like the card isn't keeping up with the transfer speed.

Once upon a time (and I don't shoot video), someone told me that if an SD card is merely inserted into the camera (whether or not it's the card you plan to use to save data) that the camera has to slow down it's I/O speed to the speed that all slots can handle.  That is to say they claimed that the CF card slot will be faster if you pull the SD card out of that slot and leave it empty.  I do NOT know if it's true and someone from Canon support told me they'd never heard of that before.  (well... this being the internet and all... you hear all kinds of things that aren't necessarily true.  But it would be worth testing I suppose.)

The SD card slot isn't nearly as fast at I/O as the CF card slot.

If it's happening at "regular intervals," I haven't been clever enough to detect it.

I'm using the CF slot (Transcend 1000x cards).  I honestly don't recall if the SD card was in or not.  I'm shooting again starting Thursday (same project, new segments), so I'll watch each bit after we're done (slowing things down considerably), and note about the SD card.

Back a topic here: you are suggesting I do a low-level format on the card(s)?  I just did a "normal" format in the computer.

I understand the low-level will over-write each bit (or is it byte - nevermind...) if I do that.
So, low-level it?

Yes - it's always recommended that you format the cards using using the camera.  You don't have to "low level" format it each time... but you should do a low level at least once with every new card and I'd repeat the "low level" option any time you think you may have expierenced a problem with a card.

If a card is otherwise working fine, then don't use the "low level" option.

I'm sorry to bug you with these seemingly basic questions.  You've been very kind with your time.

But here goes one more:  When you say to low-level it, are you referring to "In The Computer," or "In The Camera?"

I've been formatting my cards in-camera each and every time, but apparently that wasn't enough, so low-level on the computer, then?
Then format again in-camera, of course, so it gets the right file structure.

Is this Best Practice?

A card should always be formatted by the camera you plan to use it in if it's been formatted or used anywhere else.

I don't see a low-level format option on my 5D3 in any menu, but that's something I can look up.

Thanks again for all your time and consideration!