Auto-suggest helps you quickly narrow down your search results by suggesting possible matches as you type.
Showing results for
Search instead for
Do you mean
Reply
Topic Options
walmirribeiro
Occasional Contributor

Hello friends, I sent minha7D for Canon to Brazil.
she remained for several days in tests. and showed no defect.
the defective battery not reconheser, avia disappeared.
The technical report was the following ..
a problem in the battery, (Original) caused this error ..
However, by staying a few days off, this information is lost in the memory of the 7D ... and everything started to work normally.
Only then I'll have to buy another battery.

According to the technicians from Canon. this error is caused by the battery.
desapareser for the error, you should leave the mamera off without batteries for a few days, al this information is lost. and everything returns to normal.
however you should change the battery, because it must be bad.

Sorry for the google translation

However, can someone here from Canon translate this. - picture attached.

Very vague "Adjustments made to circuit board" What kind of adjustments, was it replaced, should I expect to have this "adjusted" again lets say a year from now? Did the batteries and / or updated firmware cause the board to go haywire? I take immaculate care of the camera so this was a totally out of the blue error when this started.

Is that the leading cause of this "battery communicate error?" After shelling out this kind of money, I thought I would get a more detailed explanation. Although I appreciate the fix, I see this error with MANY 7D cameras all over the web and other forums. Just Google "Cannot communicate with battery 7D"

If this is a flaw, Canon needs to own up to this and issue a recall if these circuit boards are an issue. 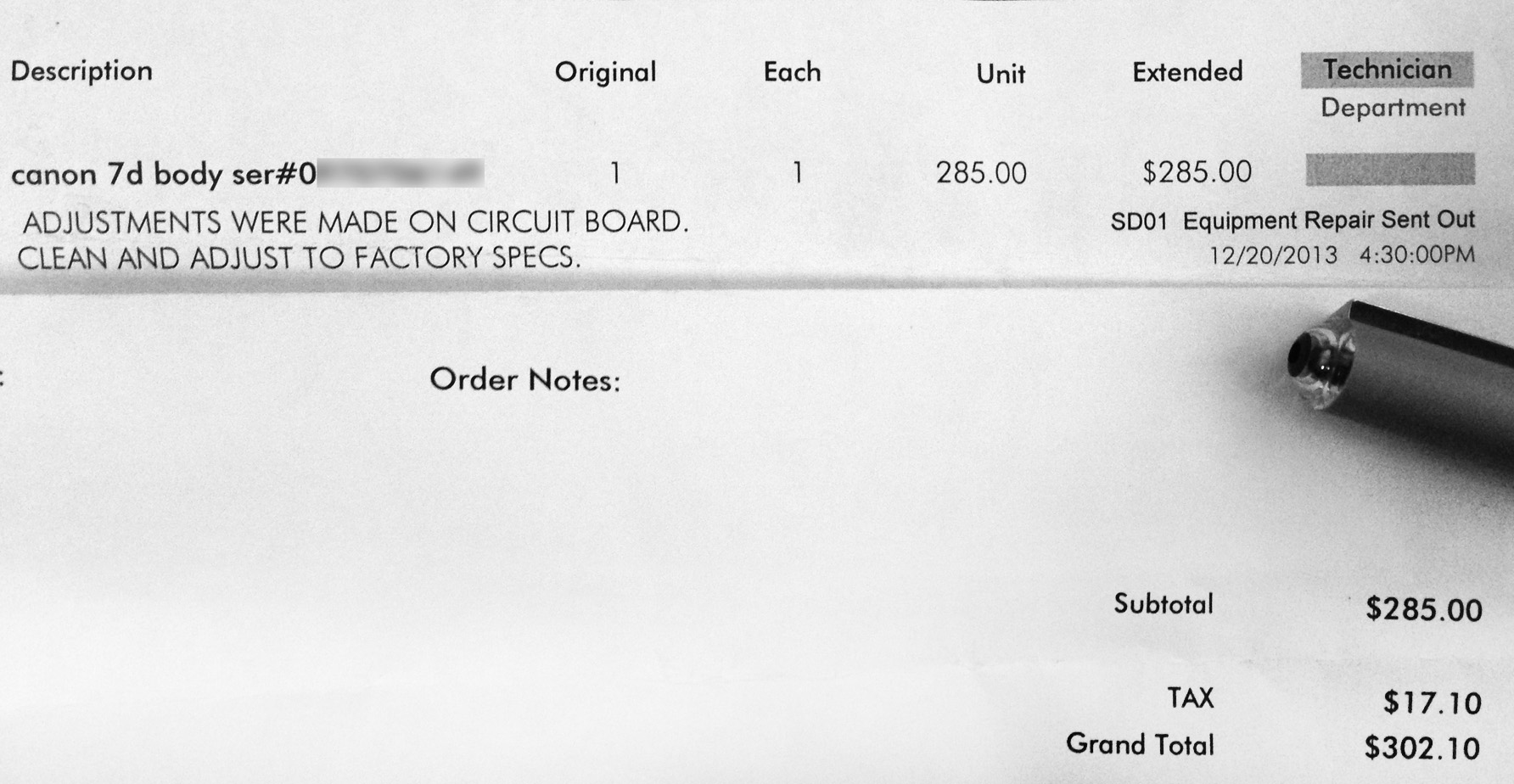 Hate to beat a dead horse with this issue, I did have to drop close to ANOTHER $200 on two new EP-L6 batteries. I went to use the camera a few mornings ago - first time in 4 days on fully charged batteries, noticed the battery icon - using my battery grip with 2 L6's - showing 1 bar...15 minutes later camera went off, batteries died.

Anyway long story shot, I looked at the Battery info on the Menu screen, both battery's showed 1 red bar on the Battery perfromance"...meaning  - "Battery has reached the end of its useful life, and should be discarded and replaced with a new LP-E6 battery pack."

Before the "cannot communicate" problem, I had 3 green bars on my battery performance.

So to Mike at Canon that posted back in February, YES this affects the battery.

"I am not certain this is a "camera" issue.

Well, of course it IS a camera issue because it shows up on the camera but I don't think it is the camera causing it. I have seen this on several different models. I am sorry I don't know exactly what works to correct it except new batteries."

I am going to repeat my post from long ago. This is only my 40 years of experience with Canon equipment. I am not a technician but this is what I have known. Possibly there is a large batch of faulty batteries out there (even Canon).

I discourage the use of 3rd party batteries ever. Strongly discourage it.

Now I am sure there is that specific camera that has a flaw but I still will go with bad batteries.

I have the same issue, one week before I go onto a Safari photoshoot. As a matter of fact, the internet is filled with 7D users having the same problem.

Mike, I do use original new Canon batteries, I have updated the fir ware to the latest version (.05) and I do not use a grip.

1) when switched on the 7D says "Can Not communicate with battery. Use this battery ?"

I will then be able to use the camera, however the battery info is not  displayed

2) Howver, most of the time, even recently charged bateries are drained very rapidly (over night) even when the camera is in "off state". The camara then refuses to start at all.

Mike, this issue is too wide spread to be called a one off issue or user error. It is really an manufacturing issue. Please advise what to do.

The "solutions" to this are so widespread. I have seen postings that new batteries will clear up this problem. I've also seen someone put the camera into the freezer for 20 minutes..this seemed to work (No way I was going to try that).  Cleaning the copper connections..that worked for some. Removing batteries and the small watch battery...another "fix." Can't say if this was a permanent fix for them or temporarly. But for many, like myself it needed a costly repair.

Look, I love my camera..I can't complain really, I have it since mid 2010 and this is the first problem I ran into.. I've seen many who only have had the camera a few weeks before this problem started. Even one who bought it from B&H, right out of the box the issue was there. THAT has to suck.. Inconvenience, yes. I guess the bright side for them it's under warranty.

Do I fear this issue will pop up again out of nowhere, I do.  I would like to know...from Canon, what is causing this (battery, faulty internal part..the firmware?) Why is it so common? I would understand a few cameras affected, but when you start typing  "cannont communicate..." into Google and it autofills the rest. Then you know it's a popular problem,

Heck let us know if there is something we need to do to perhaps prevent this again.

I've been living with this malfunction for the past six months. I've finally had enough. This is a major issue for so many owners. Canon please help!
Report Inappropriate Content
Message 18 of 84 (9,589 Views)
Reply
1 Kudo
eesnova
New Contributor

After, as usual, no response from canon, I took my camera to on independent repair shop. They confirmed that the 7D has a manufacturing problem, which creates a disconnect within the PCB, as a matter of fact , they told me , it starts with a screw which gets lose, which then creates the issue. If it not fixed in time, that screw can actually unscrew completely and then it can short oit your camera. They told me that there is no software or firm ware ipgrade , which can fix this, and concerning the freezer method decribed by someone, that if the screw is not too lose, the drop i temperature might temporarily fix it again, but it will alsways come back.

Since I had to go on a safari shoot that week, and since they knew exactly what it was, they fixed it within the same day ! And it only cost me $ 180. no more can't communicate with battery message, no more fast draining of battery etc.

I know the $ 180 stil sounds $ 180 too much i. Terms of the supposedly professional brand, who just like car manufaturers do or even super markets, initiate a recall of their products if there is a manufacturing issue, instead of asking if you are a mameber of the canon profesional club, having a wait time of several weeks, asking for rediculois amounts of money, just to see if there is an issue, and then charge an astronomical amount of money tp repair a manufaturing issue that should not have happend in the first place.

My recommendatiion, just find a reliable independent repairshop. Ask them if they have seen this before, and if they can describe ithe issue and the solution, go with them.
If they can not, it means they will kind of make it up on the fly, and I would not risk going with them.

This is a forum, it is not the place to request repair or warranty work on Canon products. They have an 800 number for you to use.

I my experience Canon has dealt with me and customers very positively.