Auto-suggest helps you quickly narrow down your search results by suggesting possible matches as you type.
Showing results for
Search instead for
Do you mean
Reply
Topic Options
Highlighted
Karenflsa
Occasional Contributor

My EOS 6D has developed a strange arc  on my pictures. It is notthe lens-works fine on another body and a differnt lens produces the same arc so definitely the camera see picture. Less noticeable when zoomed in. Any suggestions would  be gratefully received so i  have some idea before taking it in for a repair 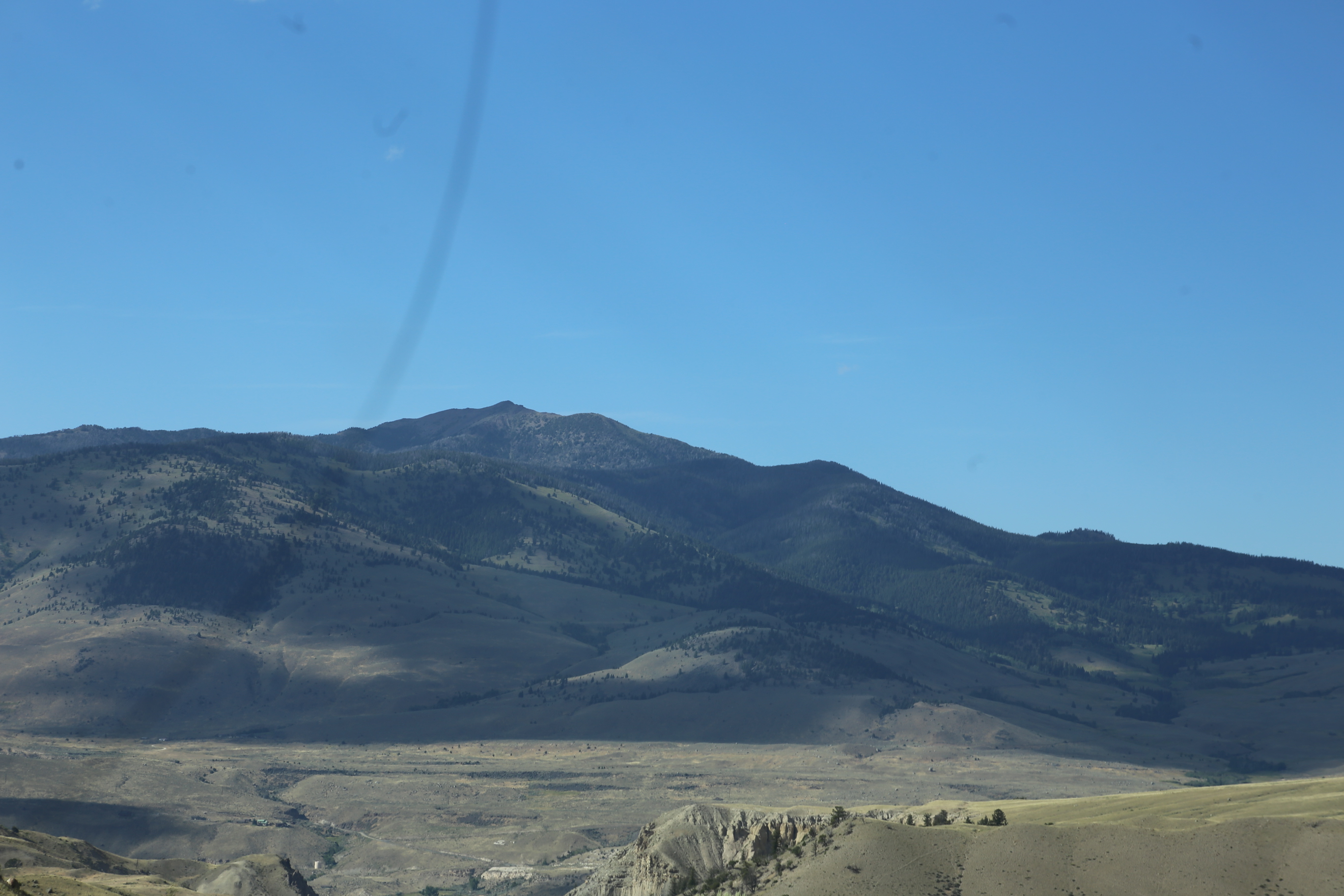 I would guess a hair on the sensor.

You can try a rocket blower to clean it, or send it to Canon.

This post belongs in the EOS discussion at the top.

In Menu lock the mirror up.  Blast with rocket blower. Lightly brush with sensor brush if needed.

Yeah, it looks like a hair on the sensor.  Purchase a blower to blow it out.

You will need to lock up the mirror to do it.  Make sure that you turn the camera so that the opening faces down [I do this over my bed, BTW.], so that any loose dirt, dust, or hair falls OUT of the camera body, instead of finding a new home inside of it.

"Doctor told me to get out and walk, so I bought a Canon."
Report Inappropriate Content
Message 4 of 20 (2,054 Views)
Reply
0 Kudos
Highlighted
TCampbell
Esteemed Contributor

Remove the lens (in an environment which is less dusty than the inside of your camera), point the camera at the ground and use the menu to navigate to the "manual" sensor clean function.  This will cause the mirror to swing clear and the shuter curtain will open -- revealing the sensor.

You can then use a hand-squeeze blower to hit it with a few puffs of air.

Don't use a can of compressed air as the majority of these use a propellant that leaves a residue (it will "fog" the glass filter in front of your sensor -- causing a loss in contrast and that would require a "wet" cleaning method to remove the residue -- such as "Eclipse" brand sensor cleaning solution with "Sensor Swabs").  Most dust doesn't need any "wet" cleaning solution -- a few puffs of air will clear it.

Sometimes the dust can have a 'static cling' problem so it doesn't want to release.  There is such a thing as a "grounded" brush.  It has very soft bristles, but it's conductive... and the end of the handle has a wire and a clip that you connect to a grounded surface.  This releases any static charge so that the dust should (hopefully) fall off.

I've never needed to use a brush.  Usually air is enough.

Yes...probably hair and a few bits of dust...

Most of the time, a blast of air from a good blower will solve the problem.  But not always.  Recently, I cleaned my 5DIII sensor with a dry sensor swab due to stubborn dust spots that won't vacate no matter how hard I blew on them.

Happy to report that my 5DIII sensor is clean as the whistle without any damage after the swab wipe.

Hopefully a blast of air from the bulb-type blower does the trick on the hair and at least most of the specks.

I have never needed to (nor wanted to) do a wet cleaning.  I've heard you can get spotting that is a hassle.  I've also never wanted to ship my camera anywhere if I didn't absolutely have to.

I did buy a "sensor gel stick" (google exactly that to see) which is simply a little square of very slightly tacky blue gel/rubber on the end of a plastic stick. You first use the blower to get everything you can. Then you clean the gel stick by dabbing it on some clean peel-and-stick sheets they provide, then you dab your sensor and the gel lifts the specks of dust off. Easy peasy. Works perfectly. All of 2-3 minutes. I did also buy a lighted sensor loupe so I can see when all the specks are gone.

I don't know if it is a hair but your sensor is very contaminated.  I think a professional cleaning is in order for it.  Send it to Canon for a C&C.  You might want to see if the lens has this much stuff in it also.  Are you changing lenses in dusty places?

You can get a Rocket blower later.

I have never needed to (nor wanted to) do a wet cleaning.  I've heard you can get spotting that is a hassle.  I've also never wanted to ship my camera anywhere if I didn't absolutely have to.

I've done this a few times, but there are some precautions.

1 - Before "wet" cleaning I still use the dust blower to get as much as I can.

2 - I use a magnifying loupe (e.g. a sensor scope) to inspect the sensor and determine what, and where, the "dirt" is that remains on the sensor.

3 - I use "Eclipse" cleaning solution (by "Photographic Solutions, Inc.").  The solution is nearly pure methanol so it has (a) a very fast rate of evaporation and (b) leaves virtually no residue behind.  Most dedicated camera stores stock it.

4 - The Eclipse solution is used sparingly by putting a couple of drops (maybe 3 drops total) on a swab.  The same company makes a product called "Sensor Swabs" and they come in sizes so that the width of the swab is the same as the sensor height (e.g. you buy the version for an APS-C or Full-Frame sensor, etc.)

5 - Time to waste some swabs... (and I do mean "waste" - don't reuse these things).   I do a "light" sweep (you may find instructions that tell you to do firm pressure... I do very little pressure on a first pass.  Then I inspect it to see if that was good enough and/or how much actually came clean.  That swab goes in the trash.

6 - I'll do a second pass and may use more pressure only if needed, but I want one "clean" pass (with a new swab).  Then that swab also goes in the trash.

(At this point, some people may look at the price of the box of swabs, the fact that there aren't very many, and think... geeze... these swabs are like $45 for a box of 12.   That's basically $3.75 each.  I think I'll try to reuse my swab.  But this is the point where I ask you:  (1) How much did you pay for you camera, and (2) How much will it cost to repair if you scratch the sensor or it's coatings?  And (3) do you really want to shell out for the several hundred dollars in repair costs because you were trying to save $3.75?)

It does do a great job and the sensor (well... really there are a couple of filters in front of the sensor, so what you're really cleaning is the front-most filter, you can't actually "touch" the sensor itself.)

But my earlier point is that often times if i have dust, I'll remove the camera lens in a clean environment, point the camera at the ground, and invoke a sensor cleaning cycle (let the camera's piezoelectric vibration see it can't shake the dust loose.)  I prefer to do this with the lens removed and the camera pointed at the ground so that the dust has some place to fall which does _not_ involve just landing somewhere else inside the camera body.  As the reflex mirror rapidly "woooshes" up and down it's just going to blow that dust around and it'll resettle somewhere.  So I'd rather it be out of the camera than just somewhere else inside the camera.

If the self-clean doesn't do it, then I'll use the squeeze bulb blower.

If the squeeze-bulb blower doesn't do it, then I'll use the loupe to see what I'm dealing with (I always inspect for deciding on the next action) and often that next action will be a "wet" cleaning.

I don't actually own one of the static discharge (grounded) brush, but if I did then I'd probably use if the air puffs fail to clean the dust and before resorting to the wet-cleaning method.

But ultimately, the "wet" cleaning methodhas always been a success.

BTW, I should have added...

A quick and easy way to check for dust or anything else on your sensor:

7)  Inspect the frame for spots.

As long as you shoot a plain (non-contrasty) subject such as a "white" wall, or a "blue" sky ... or even a cloudy-overcast sky -- that isn't in focus at all (so you shouldn't see any contrast from the subject because you took a blurry shot of a subject that basically has almost no contrast) then the ONLY thing that will create contrast in the image is the dust resting on the sensor.

You can use this method to determine "where" and how much dust is on your sensor, but be mindful of the fact that the camera projects an "upside-down" image into the camera body... so if you see a dust spec in the upper-left corner of your "image" then that dust is REALLY in the lower-right corner of the "sensor".