Auto-suggest helps you quickly narrow down your search results by suggesting possible matches as you type.
Showing results for
Search instead for
Do you mean
Reply
Topic Options
oarmen23
New Contributor

Im having trouble with my canon EOS RP camera. I am trying to use a 13-55mm sigma lens to record a video but the settings grayed out any HD settings besides cropped 4K and 720p. i switch back to a canon 50mm and it works just fine even on the same adapter. The memory cards are fast enough to record 4K so idk why it would be an issue. It seems to be a rare problem as I’ve looked everywhere and haven’t found anything.
Me too
Report Inappropriate Content
Message 1 of 7 (147 Views)
View All (1)
Reply
0 Kudos
AtticusLake
Frequent Contributor

I can't find any information online about a "13-55mm sigma lens", so I don't know.  But I would guess that it's a crop lens, in other words a lens that only covers APS-C.  Since the EOS RP is full frame, the full sensor area isn't covered by the lens, so the camera can only record in crop modes.

You need to watch out for this when using third-party lenses; use a lens with full frame coverage if you want to record non-cropped.  RF-mount lenses should be fine.  EF-mount lenses, you need to check.

I am not familiar with that lens.

When you shoot stills with the lens, do you see severe vignetting around the edges of the image?  Do you have to go into the menu and tell the camera to use crop mode?  I would expect that you would, and should.

Also, I seem to recall seeing video reviews on YouTube describing some of the limitations in the video modes when using EF-S lenses.

Actually, I would guess that the camera is detecting that the lens is APS-C; that would explain why the full-frame options are greyed out.

Actually, I would guess that the camera is detecting that the lens is APS-C; that would explain why the full-frame options are greyed out.

It is a Sigma lens.  Like all third party manufacturers, they only use one mount for Canon, the full frame EF mount.  Why bother with tooling up for a different size mount when the EF will work just as well?  They don't.

Only Canon makes an actual EF-S moiunt, which the cameras seem like they can detect.  The cameras could go by the reported model number, but that would mean keeping an internal database of every lens made.  It would also obsolete any new lens releases.  It is much simpler to just detect the EF-S mount.

"Doctor told me to get out and walk, so I bought a Canon."
Report Inappropriate Content
Message 5 of 7 (86 Views)
Reply
0 Kudos
AtticusLake
Frequent Contributor

EF-S is a mechanically different mount, which allows the lens rear element to protrude back into the camera.  I've seen no evidence that the data protocol changed between EF and EF-S.  Telling the camera what the sensor coverage is would be part of the data protocol, and there's no reason EF lenses can't do that.

That would explain the OP's problem, which is "... but the settings grayed out any HD settings besides cropped 4K and 720p".

I still think your camera is behaving as it was designed. 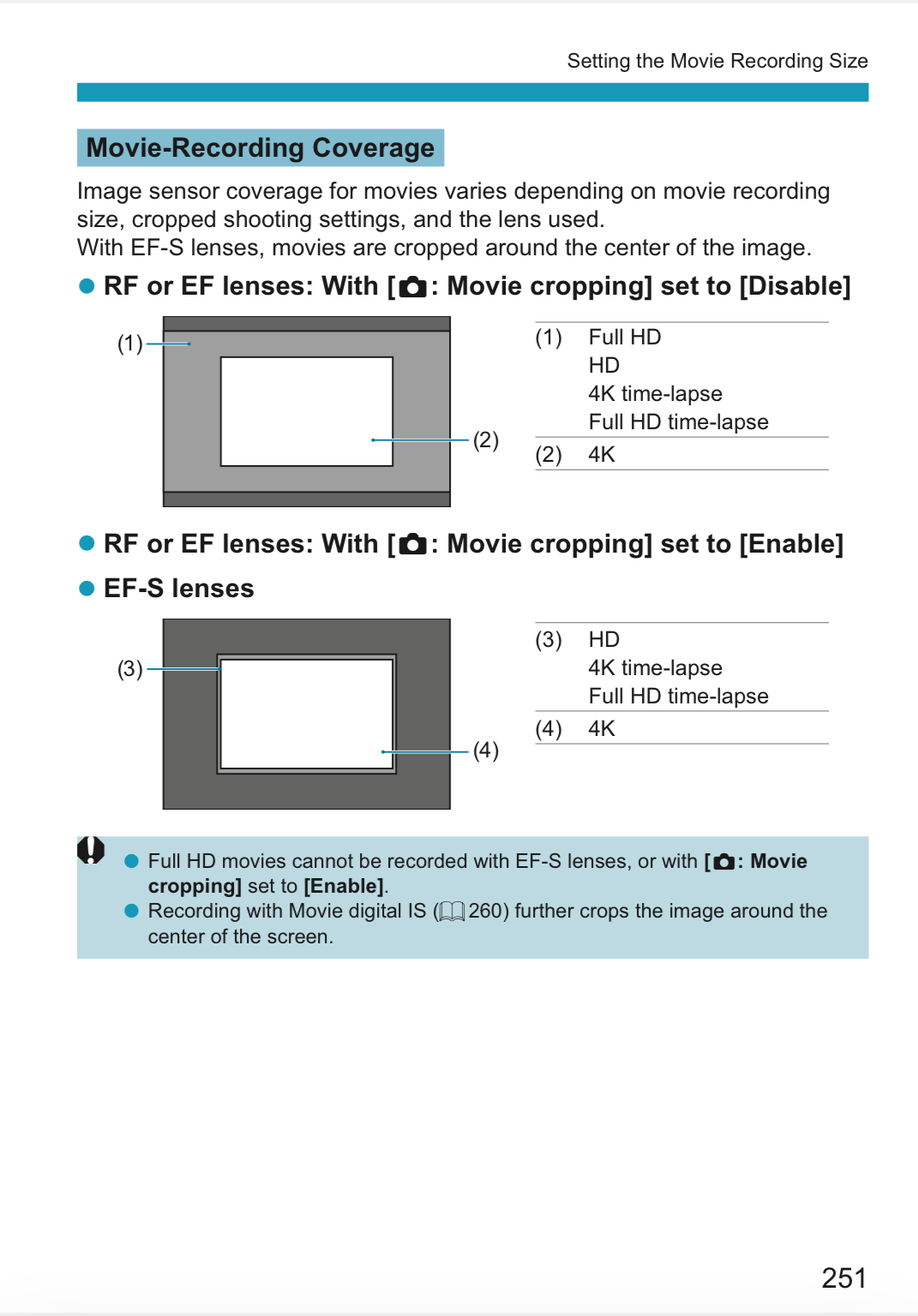 "Doctor told me to get out and walk, so I bought a Canon."
Report Inappropriate Content
Message 7 of 7 (69 Views)
Reply
0 Kudos