Auto-suggest helps you quickly narrow down your search results by suggesting possible matches as you type.
Showing results for
Search instead for
Do you mean
Reply
Topic Options
camp
New Contributor

I have inherited a Canon 180 mm, f3.5L macro lens, along with a good tripod and ballhead. I have taken a couple of online camera classes and am able to get out of auto, but I'm still more comfortable using my Panasonic point-and-shoot with a 30X zoom.  I am very interested in learning to use this new Canon lens. I want a Canon body that will enable me to use this lens in the best way possible. At present, I have a old Canon Rebel XSi. Would appreciate help in choosing camera body. Thanks.

I have inherited a Canon 180 mm, f3.5L macro lens, along with a good tripod and ballhead. I have taken a couple of online camera classes and am able to get out of auto, but I'm still more comfortable using my Panasonic point-and-shoot with a 30X zoom.  I am very interested in learning to use this new Canon lens. I want a Canon body that will enable me to use this lens in the best way possible. At present, I have a old Canon Rebel XSi. Would appreciate help in choosing camera body. Thanks.

What is your budget?

The current Canon DSLR lineup is broken into three basic categories: beginner, intermediate, and advanced.  Some may refer to them as; entry level, enthusiast, and professional.  The differences are readily apparent in the model numbers, which will have 1, 2, 3, or 4 digits followed by the letter “D”.

Judging from your experience, a Rebel might be a good fit for you.  To get the most out of the advanced lens, I would recommend a T7i, or a 77D..

"Doctor told me to get out and walk, so I bought a Canon."
Report Inappropriate Content
Message 2 of 9 (2,063 Views)
Reply
0 Kudos
ScottyP
Respected Contributor

That's a great lens. Have fun with it.

Your current camera would do a pretty decent job.  A T7i would also work very well. What's the budget?  What other than macro do you shoot?  Is there any sports or fast action shot indoors?

Thank you for the detailed response about the difference in Canon models. This gives me something I can use for reviews. Can't wait to get started.

Thanks, Scott. I primarily shoot closeups/macro and landscapes. Budget remains to be seen, but T7i would be in range. No sports or indoor fast action. Would like to get better with birds.

"Your current camera would do a pretty decent job.  A T7i would also work very well."

I like this, It is good advice. Although you can use the ef 180 as a regular lens it is designed to be a 1 to 1 macro.  It is very good to maybe the best there is at macro.  Big fan of the 180mil. It is extremely unlikely to just fall into one.  They aren't that common so you are pretty lucky to have one.

"Would appreciate help in choosing (the best) camera body."

If the budget is possible, the 5D Mk IV.  It will bring out all the best of the 180mil.

The Canon EOS Rebel SL2 has the identical sensor (and sensor performance) of the EOS Reberl T7i.  The major difference is that the SL2 doesn't have the same focus system and is physically a more compact EOS body (it's the most compact of any DSLR).

Higher end focus systems usually are loaded up with many more focus points... which is great for tracking fast moving action.  Macro and landscape photography typically don't have fast-moving action... so this is a feature you are unlikely to miss.

The EOS 5D Mark IV is a high end full-frame body (not quite the "flagship" Canon body, but it's up there).  The EOS 6D Mark II is considered an "entry level" full-frame camera ... but don't be disuaded by the term "entry level".  A full-frame body typically costs in excess of $3k.  This was a camera that Canon designed to cost less than $2k in order to make "full frame bodies" accessible/affordable to those who just can spring for cameras in the normal $3k+ price range.

Usually (but not always) landscapes are shot with moderately wide angle lenses.  This is because a side-effect of "wide" lenses is that they "stretch" the sense of depth and make a scene appear deeper and bigger than it is in real life.  Just occasionally a landscape photographer will use a long focal length lens becuase they do the opposite... they create "compression" which creates the illusion that things are closer than they really are. 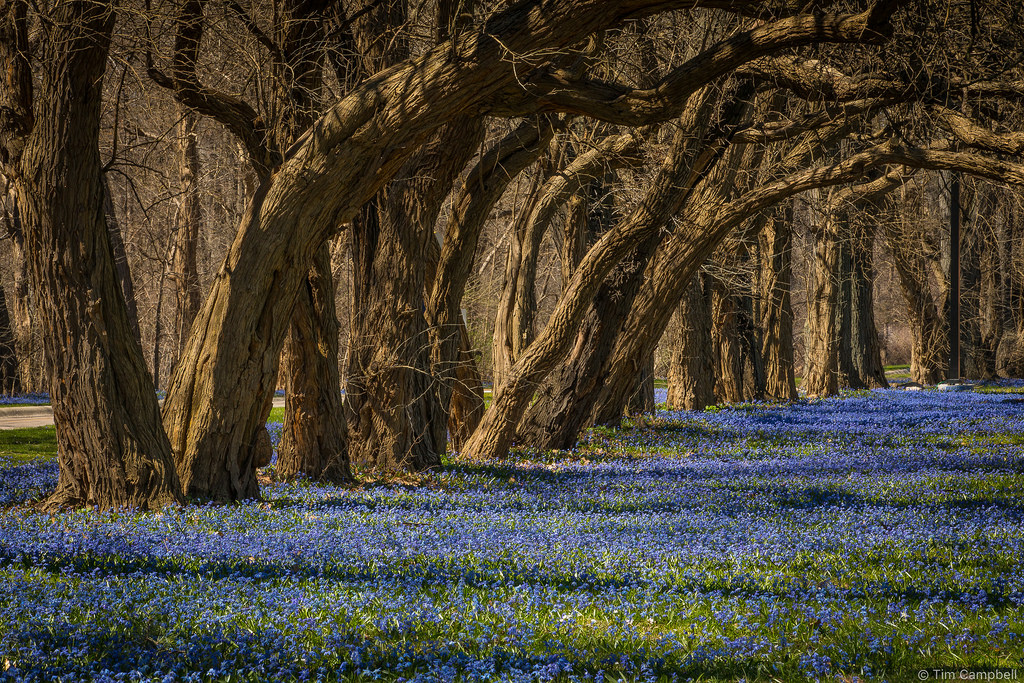 This shot was taken with a 70-200mm at about 155mm focal length (using a full-frame camera) because I wanted to narrow the angle of view (to cut out unattractive distractions out of frame - as I recall there were road-signs to the left of frame and some buildings and parked cars to the right of frame) and also because I wanted the "compression" to allow for a bit more detail in the carpet of flowers.  But this is uncommon in landscape photography.

If you aren't familiar with the difference between a "full frame" vs. an APS-C "crop-frame" camera, the sensor size of the "crop frame" camera is a bit smaller.  This means more of the image being projected into the camera by the lens spills off the sides of the sensor and isn't recorded.  It produces a narrower angle of view than what you see if you used that same lens on a "full frame" camera body.    A "full frame" sensor meassures 24mm tall by 36mm wide.  An APS-C "crop-frame" sensor measures 15mm tall by 22.5mm wide.

But it's the impact of having a physically larger sensor means the photographer can position the camera a bit closer to a subject to get a similar composition.  This change in position alters the depth-of-field for the shot, which in turn increases the amount of background blur.  Photographers who do portrait photography (or just want a burred background) usually enjoy the effect.

Thanks to everyone for all the detailed answers. I'm realizing more and more how fortunate I am to have this lens. Hope I can do it justice. Thanks again.