Auto-suggest helps you quickly narrow down your search results by suggesting possible matches as you type.
Showing results for
Search instead for
Do you mean
Reply
Topic Options
Highlighted
MikeSowsun
Reputable Contributor

There are no Depth Of Field markings on your 24-105 lens.  Those red markings are for shooting with InfraRed film. 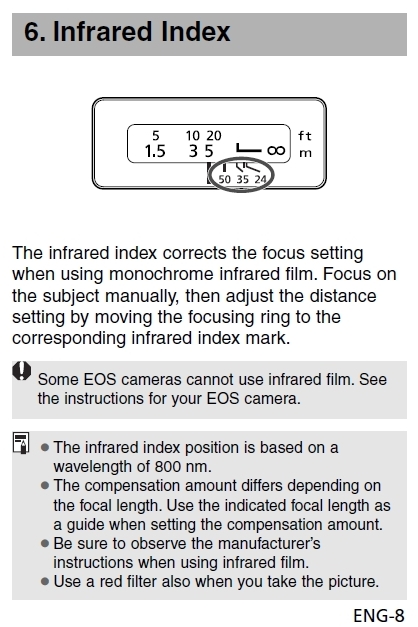 Thanks Tim, that's brilliant - all that info and that great explanation.   It would make it so easy if the lenses still had depth of field marks - how daft to get rid of them!

My lens just has 3 red marks as you will see in this photo of it.    http://www.ephotozine.com/article/canon-ef-24-105mm-f-4l-is-usm-interchangeable-lens-review-14847  .....and they appear to relate to the different possible focal lengths

(I'm not sure what they're used for, but my guess is once the subject is in focus, whatever distance lines up with the focal length you're using, is the distance you are from the subject?)

Anyway, regarding your example of 50mm & f22, this Manual Focus with the hyperfocal distance apps sounds great, although it seems that as long as I have no special interest in the very near foreground  ie stuff less than 6.11' away, everything beyond that will be sharp.  So I just need to manually focus on an object at or beyond 12.2' to be sharp to infinity really.

So just one question, if I was to still use AutoFocus instead, does this mean I just need to pick a red focus box that is over any object which is more than 12.2' away to get the far distance sharp (even if I have no special interest in the object itself). And probably as you said, if I don't have a tape measure, it's best to err on safety and make sure the object is definitely over 12.2' away.    (although if I want as much foreground as possible to be sharp, ie max depth of field, I should try not to aim for an object that's  too much more than 12.2' away.   Maybe aim to guess for 20ft)

Some lenses still have DoF marks but typically only on "prime" (non-zoom lenses) and not all primes have them.  The depth of field changes for every foral length.  That means the spread of the marks has to change if you change focal lengths.  Push/pull zoom lenses had sweeping curves... most zooms use a rotating zoom ring... not the "push pull" type.  But with a push-pull type, you would read the scale just at the edge where it meets the zoom ring.  As you zoom in or out, the point where the ring meets that scale would change... causes the read of the depth of field marks to be narrower or wider.

As Mike pointed out, the marks you see on your 24-105 are the IR focus points.  The amount that you can bend light by passing it through a prism depends on the wavelength of light.  As light passes through each element, the shape of the element bends light by behaving like a kind of curved prism.  IR will bend the least.  This means the distance from the rear-most element to the point where the image comes to focus will actually be a little farther away.  This also changes by focal length.  When shooting iR, you have to do a final manual focus adjustment.  Keep in mind the camera is going to focus based on visible wavelengths.   After it focuses, you read whatever focus distance appears at the visible wavelength focus mark (the one in the middle) and then rotate the focus ring so that this same point is aligned with the IR focus scale appropriate for the focal length you happen to be using... and NOW you're focused for IR.   Your camera can't shoot IR, but film cameras can -- and these EOS lenses can be used on Canon film cameras.  It is possible to perform a permanent modification to the camera so that it can be used to shoot IR (you can also rent IR modified cameras) -- but this is a very invasive modification (the whole camera pretty much has to be disassembled from the back to access the IR filter in front of the sensor (and of course the sesnor has to be removed to get at it.)  This would, of course, void your warranty (so it's better to "rent" a pre-modified IR body if you want to experiment with IR.)

Your assessment is correct in that by going to the "hyper-focal" distance for that f/22 example using a 50mm lens... we gained 6' of focus.  There are times when you deliberately do not want max depth of field... more often you do, but not always.

You can let the camera focus automatically by picking something to focus on which you are confident will provide the focus coverage you want.  In the f/22 example where the hyper-focal distance was at about 12'... as long as you focus on anything 13' away or farther, everything from your focus point and farther will be in acceptable focus... and of course MUCH of the space in front of that focus point will also be in acceptable focus.

But keep in mind that this example used f/22.  If we used f/11 and focused at infinity, the near edge of the depth of field is about 23' away.   At f/8 it's about 33' away.  So now you're losing more of the foreground by using lower f-stop values.

There's one more nit-pick I'll point out (just for completeness... but please do not obsess over this).  Light technically does not focus to a single point.  It focuses to something called an "Airy disk" named for an astronomer who discovered this in the 1800's.  This is due to the wave nature of light and how it behaves as it's pushed through smaller openings.  Your camera sensor is covered with light sensitive points called "photo-sites".  These are clustered in groups of 4 sites designed to be senstiive to green (mostly green), red, and blue wavelengths.  When combined they create a "pixel".  As you increase the f-stop value, you ALSO increase the size of the "Airy disk".  At some point, this enlarges enough such that it is no longer possible for a single point of light to focus on just one "pixel" and it begins to overlap adjacent pixels.  This technically "softens" the image -- an image which is focused as well as possible will not be perfectly sharp under close scrutiny.  Of course you can only see this if you really zoom in to 100%.  Most of the time you wont view or print an image that large.

There's a mathematical way to calculate when a camera is diffrcation limited but it requires knowing the size of an individaul pixel -- so the info above is really just a general guideline for our cameras which are in the neihborhood of 18-22 megapixel sensors.)  This is one of the reasons why I don't see the point of very high megapixel cameras (like the Nikon D800... that camera is diffraction limited at f/8).

Diffraction limits, by the way, are based on laws of physics which describe the behavior of light and these are based on an assumption of perfect optics.  So it's not a question of just owning a good enough lens.  If someone could produce a lens which was technically "perfect" (which would have some ludicrously high price tag), you would STILL have this problem.

So why bring this up?    I only bring this up so you can file it away in the back of your head... if you plan to blow up an image really really big... don't use f/22 and you should probably avoid f/16 as well.  But for most images you plan to share on sizes that can fit on a computer screen ... or print out to 8x10 size... go ahead and use any f-stop you want.  If you don't *need* to push the depth of field to the max... consider backing off a bit to avoid the diffraction issue.  Don't fall into the con of "pixel peeping" ... your images are not beautiful just because focus is sharp.  There are SO MANY OTHER elements that go into making an image beautiful.  Sometimes we deliberately do not want focus to be so tack sharp.  True "macro" lenses tend to have _very_ high detail resolving capability.  I find that if I shoot people with these lenses... I need to slightly "soften" their skin or it wont look good (so there is such a thing as "too sharp").

There is a general rule that when you focus at a point, 1/3rd of the focused area will be nearer than your focused point and 2/3rds will be behind it.  This rule, isn't strictly true by the way (often times it's flat out wrong) -- but it's usually true enough that it's "safe" to follow the rule.

Thanks for the very clear reply.  Now I clearly understand that's what I've been doing wrong - picking all points whenever I had no particular point in mind, and thereby letting the camera pick its own point(s), which was one i probably didn't want.   "All Points" seems a pretty useless concept.

The only thing with what you say about choosing a point on the horizon or the most distant object - which is what I was  starting to think I should be doing - is that after reading some of the other replies,  it appears that it's not necessary to pick something that far in order to still get that far away thing in focus.   It seems like I could autofocus on an object in the middle ground and still that far object would be in focus.    By aiming too far I might lose things in the middle ground, but if I aim for middle ground I will still get the far ground sharp, but also the middle will be sharp too.

Thanks to everyone for their replies,  they've certainly sorted a beginners' mistake out.