I don't think anyone on any side of the issue is saying that, not at all.

There are some who've complained that the mount is flawed, and their lens can just spontaneously release.  I think they are being told that a flawed mount is highly unlikely, if not near impossible.  At least, that is what I have been saying.

The release button is probably more susceptible to accidents because it is typically out of the direct line of sight of the photographer.  People just have to pay better attention to what they're doing.  That's all. I've made the mistake once, but was fortunate to have been sitting down while playing with a new lens, which landed in my lap.

"...or trying to be arguementative but I make my living shooting sporting events and games..."

Been there, done that.

But I have been sitting here for the last 15 minutes trying my best to get the lens to release.....at all.  Let alone not knowingly letting it happen.  It still seems to me to be a conscious thing, not happenstance.  I can only say, it has never happened to me but I am not trying to say it can't happen.  I just don't see how.

It just seems impossibile to hit that button and properly twist the lens at the very same moment. 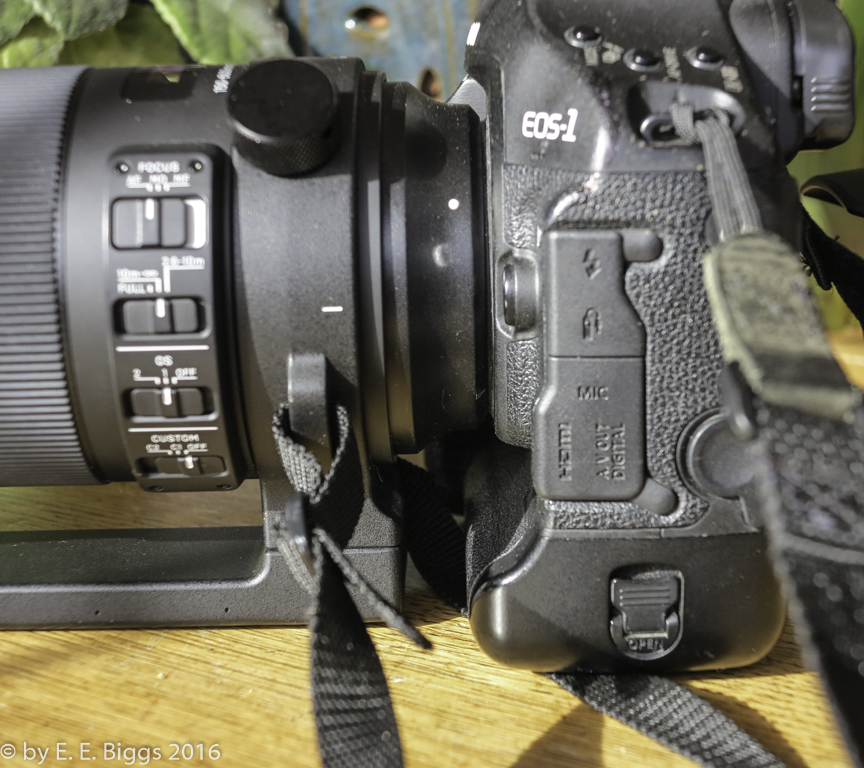 As to causing it to happne while you zoom the lens, that is even more impossible.  If you look at this example the lens itself makes pusihing the button a more purpose action.  In this case rotating to vertical, there isn't enough room for your ungloved finger let alone with a glove.  If it is happening to you, I am truly sorry as I know that crunching sound of a lens hitting the ground is horrible.  Done that too but it was my fault.  Not the camera.

Well you say that is just how it is with that lens/camera combo.  But it is still unlikely, to me, even with the a fore mentioned 24-70mm f2.8L. 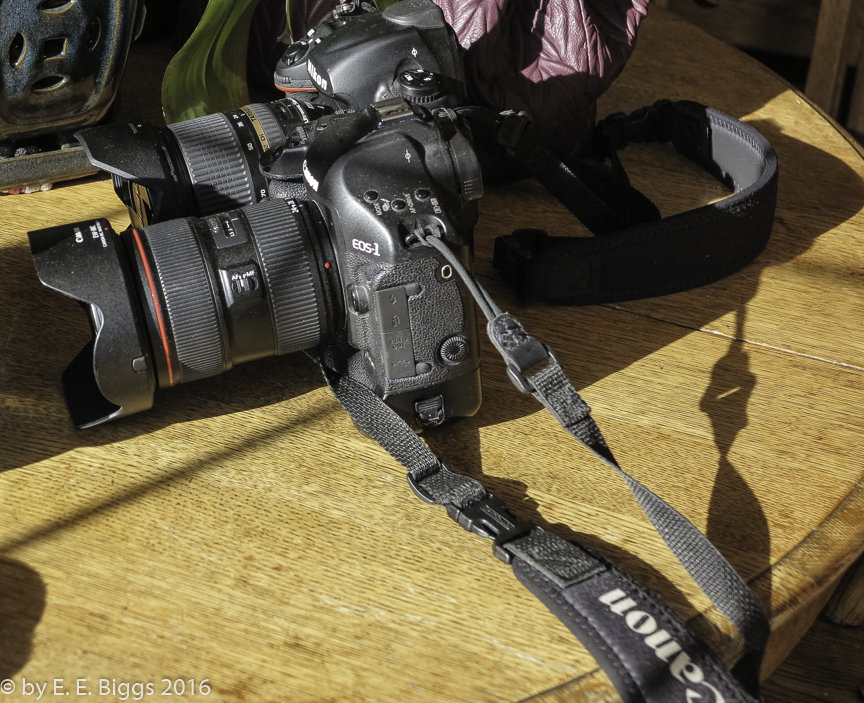 To push the lens release button and zoom at the same time?  Especially when this lens zooms the opposite way you need to rotate it to remove it.  Do you see why some of us are skeptical? Not saying it can't happen at all.  We just don't understand how. 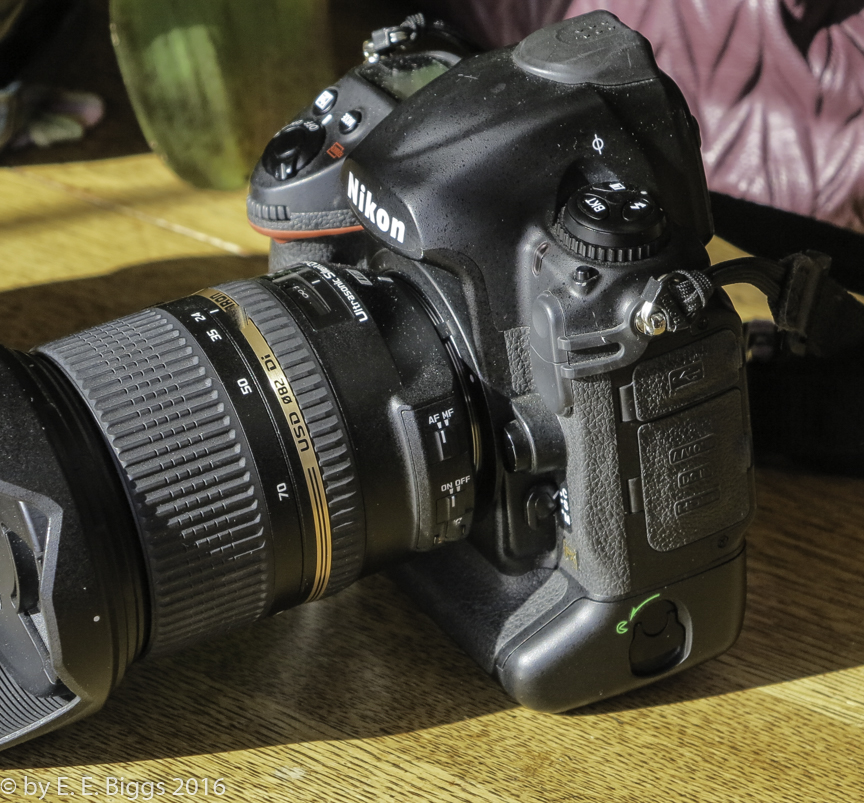 The lens release button is much larger.  The zoom ring is closer in this particular combo but again the lens zooms the wrong direction needed to remove it.  Again there is no room for a gloved finger.  Sorry for being so dense but I just don't understand how.

With smaller lenses, which lack a tripod foot, the lower left corner of the camera sits on the heel of my left palm.  I've found that to be the best way to hold the camera, and still be able to reach the DOF button with my ring finger.

I find that I can reach the DOF button easily with the ring finger of my right hand.

I think some of that depends upon the camera body.  The DOF preview button moves in different directions on different bodies, not to mention a being placed in a different location. ...

The discussion has been about the 5D3, and I wasn't intending to push it beyond that. (At the risk of wandering OT, I wonder why they changed it on the 5D4.)

I think you and I have had this conversation before.

Not that I recall, but I have to confess that my memory may not be what it once was.

"Not that I recall, but I have to confess that my memory may not be what it once was."

While shooting sports, I can't ever remember pushing or using the DOF button.  But again perhaps a faulty memory, not what it once was, but I think I would remembe once at least!

I have found it easiest to do when the camera is tripod mounted, which many said they were using.  I think they may go to reposition camera, and you grab it with both hands, one on either side of that camera.  I've done that one before, too.

I'm not sure how significant the rotation direction of the zoom ring is.  You can turn it either way.  When the lens fell into my lap, I think I was turning the zoom ring, which had reached it's limit, and I began rotating the lens out of the mount.  I stopped myself, but it was already too late.  The lens was loose, and it dropped into my lap.

I don't use the DOF button.  I've experimented with changing it to do something else, but the button is a bit too inconvenient to use.

As for that Brand N camera, Yikes, look how close the release is to the lens controls!

"Doctor told me to get out and walk, so I bought a Canon."
Report Inappropriate Content
Message 67 of 185 (1,334 Views)
Reply
0 Kudos
RobertTheFat
Honored Contributor

I'm not trolling or trying to be argumentative but I make my living shooting sporting events and games, from the NFL to the Olympics, ...

I don't claim to be a professional. But for the past eight or nine years, until my retirement in September, photography was part of my job. So I'm not exactly a newbie.

and no one that I work with holds a lens with their hand on top of the lens.

Well, they don't speak for me. And if their lenses aren't falling off, I have no reason to try to speak to them. And BTW, my hand is to the left of the lens, not on top of it.

and refer to page 43 - Holding the Camera.

Yeah, I know what they say. But it's easier to draw somebody's hand in that position than it is to actually hold it there.

Hold the camera as instructed. Now pretend you're following a running back sprinting down field toward you. Quickly switch the camera from landscape orientation to portrait orientation. As the body rotates, the Lens Release Button rotates right past the meaty part of your thumb.

The nice thing about the way I hold it is that it doesn't. As my right hand moves up and to the left, the button moves away from my thumb.

It's a big button. It's got a very weak spring. Now try it with gloves on. The problem is exacerbated. With all due respect, you just can't hold a camera steady and work the zoom ring with your hand on top. While you may have potentially solved the problem of your lenses falling off, your pictures won't be of the highest quality.

In what way won't they be? Please tell me now, because in March my wife and I are going to try again to get our pictures into the juried show at the Griffin. (As it happens, she holds her cameras the same way I do.)

Actually, I didn't say that. So I guess Spock wasn't talking to me.

I suppose the size of one's fingers also plays in to it.  I still think it is operator error and not a design fault.  Perhaps lack of attention is the cause but I don't want it changed until I completely give this up.

Again I feel for those of you where this happened.  It can ruin your whole day.

I guess if it has never happened to you, it is hard to see how it could.  But one thing for sure it didn't happen the way some are saying it did.  There has to be some input, wanted or unwanted, from the user.

Plus I don't want Canon to do anything that makes it more difficult to change lenses.  I think most/all working pros would feel the same way.  The difference between the pro needs and the hobbyist needs I guess.

Actually, it has happened to me once before.  I was sitting, and the lens dropped into my lap.  Instead of assuming the camera was faulty, I assumed that I must have unknowingly pressed the release button.  Lenses do not release by themselves.  Lesson learned!

Never crossed my mind to blame the camera.

Well, I'm not saying the camera is faulty. I'm saying the design could be better. BIG difference.

I've certainly treated the unfortunate incident as a lesson and now constantly check that my lens has not somehow become semi-detacted without my purposful input (which is what happened - and was the point of my contribution to this thread).

You may say it's the users fault - that's your opinion. I'm not looking to throw blame here, nor am I looking to defend in a fanboy like manner.

Seems to me that, after owning and using Canon bodies and lenses over three decades, and NEVER encountering this issue, it would be safe to assume that lenses do NOT get released without the EXPRESS and DELIBERATE action of the user.

But, unfortunately, the design of the newer 5D's is such that it CAN happen accidentially. And this thread shows that to be true. Even you have had it happen!

Hopefully Canon might see past those who simply throw the blame at the user and take this into consideration in their coming designs - which is the real point of even mentioning this issue to begin with.