Auto-suggest helps you quickly narrow down your search results by suggesting possible matches as you type.
Showing results for
Search instead for
Do you mean
Reply
Topic Options
wjriling
New Contributor

Hello - I've been using my Canon 100-400mm II on my 70D for the past year and am very pleased with the results, the only thing missing was extra reach, so I bought the 1.4X III. And unfortunately I've lost autofocus using the 70D (I do have the 27 points with my 6D Mark II but it goes back to the reach and frankly I'm not impressed with the quality of the photos from the 6D Mark II).

That being said are there any recommendation as to which would be better, the 7D II or the 80D using the lens combo I've mentioned above? Some of the things I love about the 70 D (and why I bought the 6D Mark II) are the articulating screens and WIFI.

Any suggestions would be greatly appreciated!

Since you really like your 70D, other than the lack of AF at F8, it seems that the 80D would be an excellent choice for you.

But plug your choices into a site like this one which is helpful.  I use sites like these like I use reviews on Amazon, they don't make my decision for me but it does highlight areas (or concerns) to look at in more detail:

There is something to be said for upgrading to a new camera that has many design themes in common with your older model since it will immediately be comfortable to you.  I waited a long time to upgrade from the 1DM2 I bought in 2005 but it only took a very short time to feel very comfortable with the 1DXM2 I picked up last month.  There are certainly control differences but it took very little time to become comfortable with the new model and I don't think that would have been the case had I jumped into a different series.

Thank you and yes, I was looking at the comparison last night, the only thing I have a question about is

How does that translate into image quality? Or does it? (I shot with film for 25 years and I still have a difficult time understanding some of the technical terminology of digital).

I started in film also but as a hobby I have a fairly strong background in electronics.  From that perspective when comparing any components focusing upon any one "spec" won't provide for a comprehensive evaluation.

The overall surface area of the 7D II and 80D sensors are nearly identical and both of course are APS-C size/format.  The 80D has a greater number of megapixels so the individual  pixel area is less for the 80D.  If everything were equal then the 7D II would be expected to have a little better low light performance with larger individual light receptors but sensor, low noise amp, and DSP technology continues to advance at a rapid rate so you can't make a valid comparison just based upon sensor light receptor size/area.  Of course the 80D is a slightly newer design than the 7D II.

Spend some time looking at the various ISO levels where you currently shoot and are likely to shoot when comparing these two and decide if one or the other has an important advantage for you.  Personally I try to avoid "pixel peeping".  A couple of weeks ago I shot my first indoor soccer game using my 1DX M2 and I was experimenting with different setups and took some images at 40,000 and 51,200 ISO and I didn't care for the results but the players were thrilled with those images which was a good reminder for me that it is the overall image that counts-not trying to find every little flaw.  With the long lens the ability to bump up the ISO may be important to what you do so take a good look at the images from both bodies shot at higher ISO and also try to find a range of images because some of the reviews sort of cheat in using a well illuminated scene to test high ISO results while real world use (at least for me) is I am shooting high ISO when the lighting is marginal and I am trying to keep a high enough shutter speed to freeze the action.

The shot below (at 40,000 ISO and I missed the exposure) would never stand up to pixel peeping but my daughter (who is in middle school) was invited to join the high school team for their pre-season indoor league and shooting at this ISO allowed me to capture her setting up the shot that was her first goal scored at the high school level.  Sometimes pixel peeping isn't required 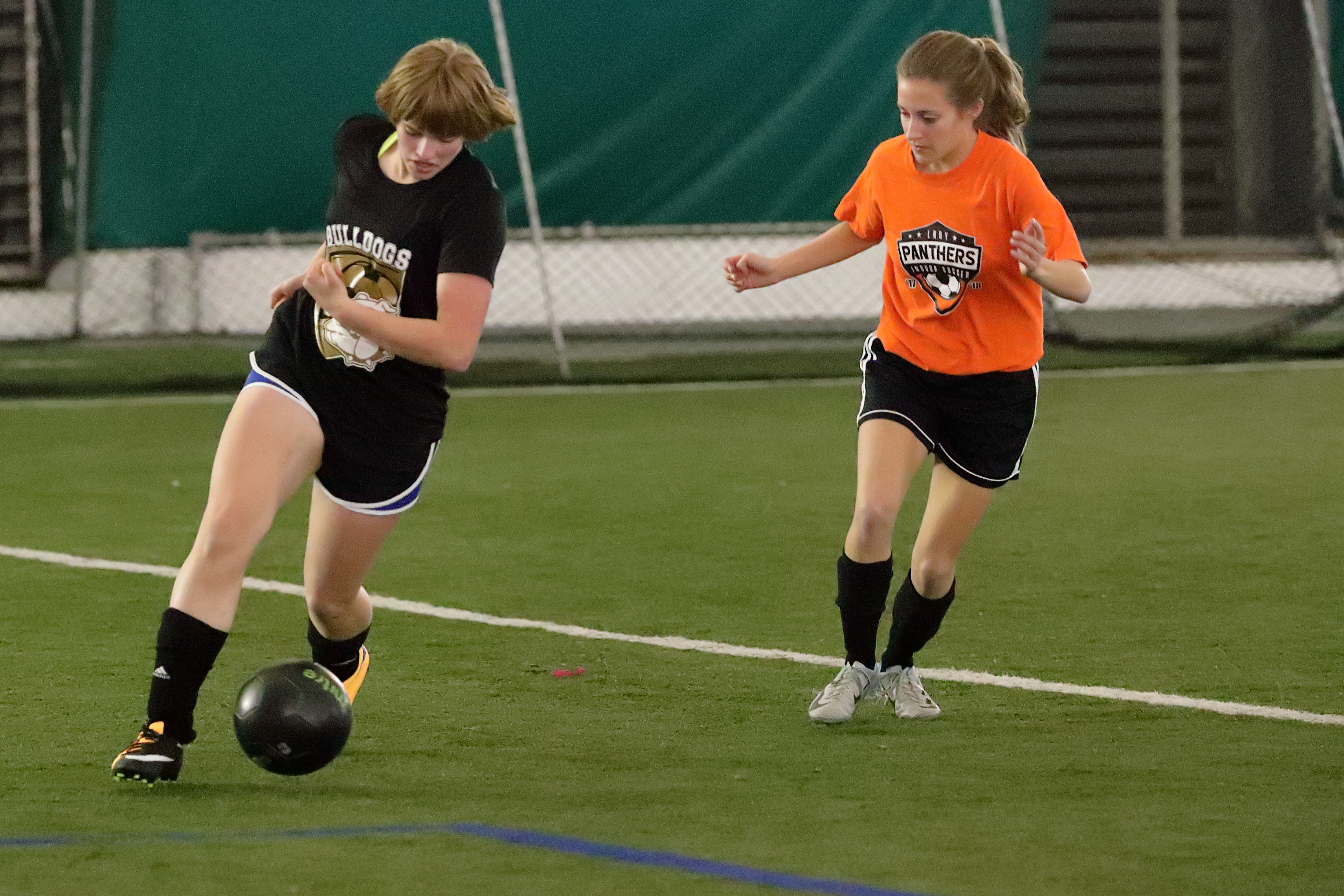 Thank you. I’m so critical of my work but others are less so. Go figure. I will definitely be bumping up the ISO as the f/8 from the extender puts me at a slight disadvantage on shutter speed. I suppose in the end I want as sharp an image as possible given what I’ve chosen as my set up. I’ve thought about springing for the longest super tele I could find and going to the 1DX Mark II but honestly, I just can’t hold that kind of gear any longer. I appreciate your feed back, lots of food for thought.
Report Inappropriate Content
Message 5 of 8 (4,619 Views)
Reply
0 Kudos
wq9nsc
Respected Contributor

With F8 lenses (like your 100-400/1.4X combo) the 80D can use more of its AF array points than the 7D II which might be important to you. I believe with that combo the 7D2 can only use the center point for AF along with up to 4 points around it while the 80D can use 9 points in the center and 9 points to each side.  This may or may not matter depending upon your subject matter. For soccer the composition I generally want means choosing the point one down from the center top with expansion around it which is what works best for me most of the time.  For stationary wildlife the center point only of the 7D2 should be OK..

Shortly after I bought the 1DM2 I took my then 2 year old daughter to the Smoky Mountains and one day I took her on a 3 mile hike with the 1DM2 and a couple of lenses.  That meant I carried her almost the entire hike and I was feeling pretty tired near the end until we ran into a young couple coming off the AT who were on their honeymoon hiking.  The new bride had broken her arm and splinted it herself and continued another day of hiking after the broken arm.  I no longer felt the need to complain about hiking a few miles carrying my daughter and a camera using my two perfectly good arms

We obsess more about image imperfections than the general public who tend to grasp the importance of subject and setting unles there is an obvious issue with sharpness or contrast.  Shooting these indoor games under horrible light has actually been a very good learning experience for me both in getting better with image capture and processing with poor lighting AND understanding that the subjects and their families are very appreciative of images that I find lacking in quality.  Fortunately for me this is purely a hobby because if money were involved I would be so critical of images that I would problaby just delete 99% of them. It is the same reason that restoring vintage radio gear is a hobby for me and I have turned down numerous paid restoration opportunities because I am concerned enough about the quality and workmanship of what I do for my own use and enjoyment.  I have done a few free radio restorations for deserving senior citizens but I am holding the line between hobby and work.

Cameras are just like cars, you need to test drive several of them before you buy and at the very least get a feel for the body with the lens setups you will be using the most often to see how it fits your hands and body.  I retired two years ago and gave myself a new Corvette Z06 as my retirement present to myself and one option I ordered because I tested it at the dealer was the competittion seats.  They are designed to hold you in place and if I had only gone from internet reviews and comments I woudn't have ordered them because many complained about the lack of comfort with these higher performance seats but after I tried it I found the seat was great and are perfect even for a 700 mile drive.  I realized later a lot of those who gave that seat option a negative review were a bit out of shape so the more confining seat didn't fit and they sat on it rather than in it. You can learn a lot from the internet but ultimately before buying an expensive camera body it is good to go hands on with all of the possible candidates.

Hello - I've been using my Canon 100-400mm II on my 70D for the past year and am very pleased with the results, the only thing missing was extra reach, so I bought the 1.4X III. And unfortunately I've lost autofocus using the 70D (I do have the 27 points with my 6D Mark II but it goes back to the reach and frankly I'm not impressed with the quality of the photos from the 6D Mark II).

That being said are there any recommendation as to which would be better, the 7D II or the 80D using the lens combo I've mentioned above? Some of the things I love about the 70 D (and why I bought the 6D Mark II) are the articulating screens and WIFI.

Any suggestions would be greatly appreciated!

Add one more vote for the 80D. My reasoning is the user interface will be closer to that of the 70D and 6D Mk II than the 7D Mk II would be.

Thank for the great feedback. I am actually ordering the 80D now as I think it’s in line with my current set up. I think I will especially appreciate that I will not be weighing myself down and I suspect the transition will be rather seamless. And really don’t want to live without WiFi, it’s a fantastic tool. Thank you again!
Report Inappropriate Content
Message 8 of 8 (4,562 Views)
Reply
2 Kudos