Exactly !  If you haven't taken the camera apart down to this level the plate is fixed not loose.  Assembly has to be done in a precise manner.

"I still see a separate metal plate with 4 screws with red thread locker on them."

Ok, Mike for us less observant, can you put an arrow or indicate what you see as a separate metal plate.  Something that isn't attached to the chassis or fixed in some other way?  I can't imagine an assemble line would tolerate a floating part inside that required it to be manipulated to fit 4 small screws into.

I never said it was loose in the photo. I just meant it is a plate and not a "Chassis". The OP removed the top hotshoe plate and that caused this plate on the underside to become loose. 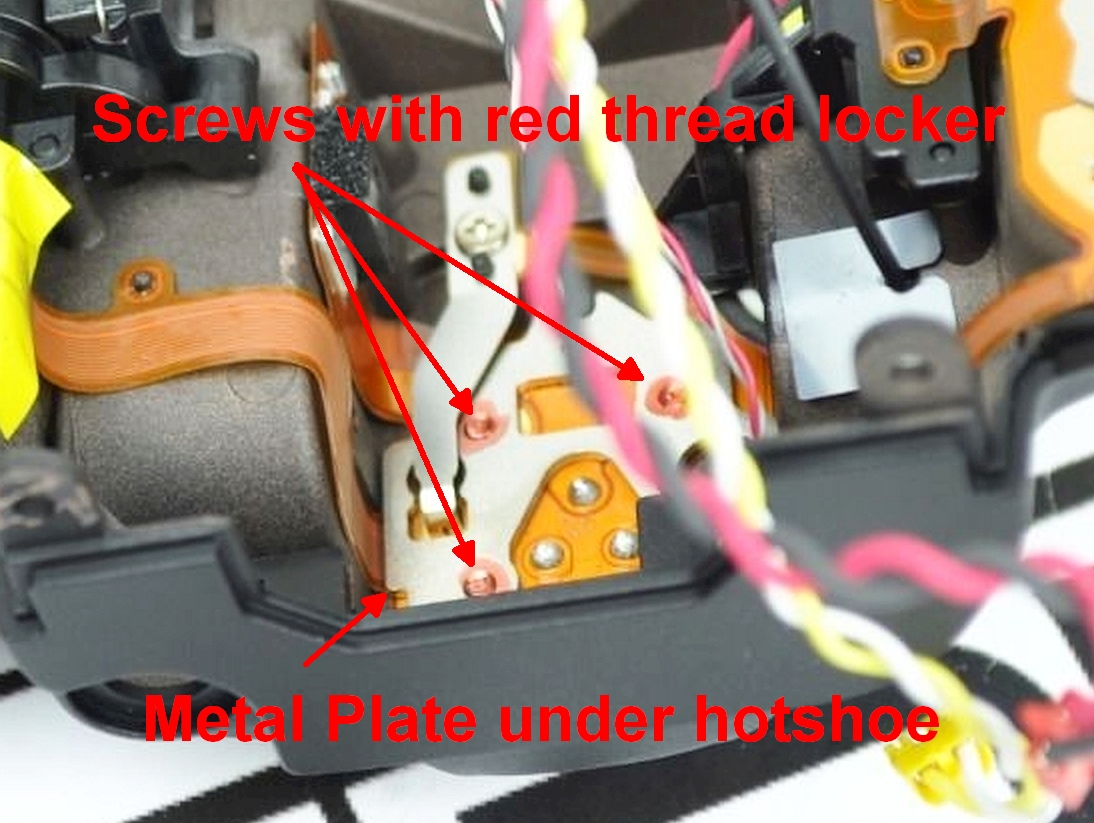 "I never said it was loose."

But this was/is the point. Whether it is separate part or part of the chassis is irrelevant.  It isn't because the plate is floating around and he cannot put the screws in.  Some other reason is preventing that.  Possibly they have been stripped?

No, I disagree. Because he removed those 4 screws, that plate has become loose and won't line up with the screws he is trying to re-install.

I found a post on another forum where they had the same problem: 7D Hot Shoe Base *Removal*--DON'T TRY!

" I did have the same issue with the internal metal plate dropping too low for the screws to engage. I solved that by holding the whole body upside down, using a paper clip to align the screw holes, and then tightening the first of the four screws in while it was still upside down."

Perhaps you are right, Mike.

I just can't imagine Canon designing something that difficult for an assembly line camera.

Perhaps you are right, Mike.

I just can't imagine Canon designing something that difficult for an assembly line camera.

It is common for manufactured products to have parts temporarily held in place during the manufacturing process (short life adhesive, design to fracture clip, etc.) that aligns the part only until the next assembly step.  Good service manuals will provide instructions about how to avoid disassembly problems related to those parts which will now free-float if an assembly step is reversed.

I restore a lot of vintage electronic gear and I have gotten pretty adept at various work-around techniques to avoid complete disassembly of a product that requires replacement of a component that is installed early in the assembly process.

One of the many problems faced by the auto insurance industry (and impacting us from the resultant coverage rates) is that often a low cost part damaged in an accident requires so much disassembly to repair that a fairly minor accident can result in the vehicle being declared a total loss.  A few months ago a less than 1 year old Corvette (valued in the $70K range) was totaled due to a bit of highway debris that cracked one of the frame reinforcement parts that goes on early during assembly and although the part itself could easily be repaired by welding the only approved process required removal of that part prior to welding which required virtually taking the whole car apart which would finally allow partial disassembly of the frame.

That is an extreme example but there is a pretty strong inverse relationship between ease/speed of manufacturing and cost/ease of repair access and what made this Canon model faster and easier on the assembly line means at least a little headache for the owner trying to do a fairly minor repair.  To some extent this is just another part of the "replace rather than repair" trend for consumer products which effectively counteracts much of the environmental gains brought about through regulations and technology.

Robert, "It shouldn't be at all difficult if done in the right order."

My point exactly.  The OP didn't go down to the level of Mike's photo.

Certain cars and trucks use a similar means of assembly. Door hinge bolts can be threaded into a "tap plate" that's fitted inside the door frame. It's usually a thick metal plate with four holes drilled and tapped to size. If you remove three of the bolts and only loosen the fourth you can usually move the hinge enough to thread one of the removed bolts back into the tap plate to hold it in place. Then you can remove the remaining fourth bolt and the hinge.

Take all four bolts out at once and as you remove the hinge you'll hear the tap plate drop down invisibly inside of the door frame. Then you're in for removing trim or other panels so you can fish the tap plate back into position.