Auto-suggest helps you quickly narrow down your search results by suggesting possible matches as you type.
Showing results for
Search instead for
Do you mean
Reply
Topic Options
DarylS
New Contributor

6D corrupting every SD card I put in it.

My 6D has been working fine until recently. Then a Sandisk 128GB SDXC card I had been using for a year stopped working. OK, card fail that's fine. I bought it on vacation, so it might be a fake or of questionalble origin.

I continued using my 6D with a Sandisk 200GB SDXC card. It worked normally for a month or two, and then today the camera said it couldn't read the card. I had left the camera turned on for a week or more and the battery was low. I changed the battery but the card was still unavailable to the camera. I pulled the card, and Lightroom could read it fine. Put the card back in the 6D, tried to format it, and it failed. I couldn't do a low level format becase the controls were frozen while the camera was trying to access the card. And after the format failure Lightroom couldn't read it any more.

I tried an older Sandisk 32GB SDHC card that has never let me down, and the camera reported that it couldn't be read as well. So now I had three dead Sandisk cards of various sizes, speeds, origins...

My PC couldn't access the cards to reformat them, so I can't even try to update the camera's firmware (it's two versions behind) because the 6D can't read SD cards.

Last ditch effort - I pulled out my 6DMKII, and while it was not able to do a quick format, it could do low level formats on the two SDXC cards. The SDHC card is still dead.

So now I can use the biggest two of the three cards in the 6D, but can I trust my 6D anymore? Will a firmware update address this problem specifically? There's nothing in the notes to indicate that it will. Could the camera's SD card contacts inside be dirty and not communicating with the cards properly? Are there SD slot cleaning tools available?

I should mention that these are micro SD and I'm using two different adapters, all with the same results, so I don't think it's an adapter problem.

It is an adaptor problem.  Period.

The micro-SD cards with adapters are not recommended for use in Canon DSLRs.  If you use a full size card, all of these issues will go away.

Can you guarantee that? In writing? It took my cameras 250,000 photos to finally realize that I've been using adapters, and it chose this moment to teach me this lesson?

Can you guarantee that? In writing?

Since Wadizzle is not a Canon employee, his (very valid) advice is not guaranteed. (I almost said, "not worth much")

Adapters and micro cards are bad, period. As you can see they can choose any moment to cause an issue.

First and foremost, Micro-SD cards are not one and the same as SDHC/SDXC cards

Finally, Canon does not recommend them for use in their DSLRs.

Do you see Micro-SD below?  All that I see is SDHC and SDXC. 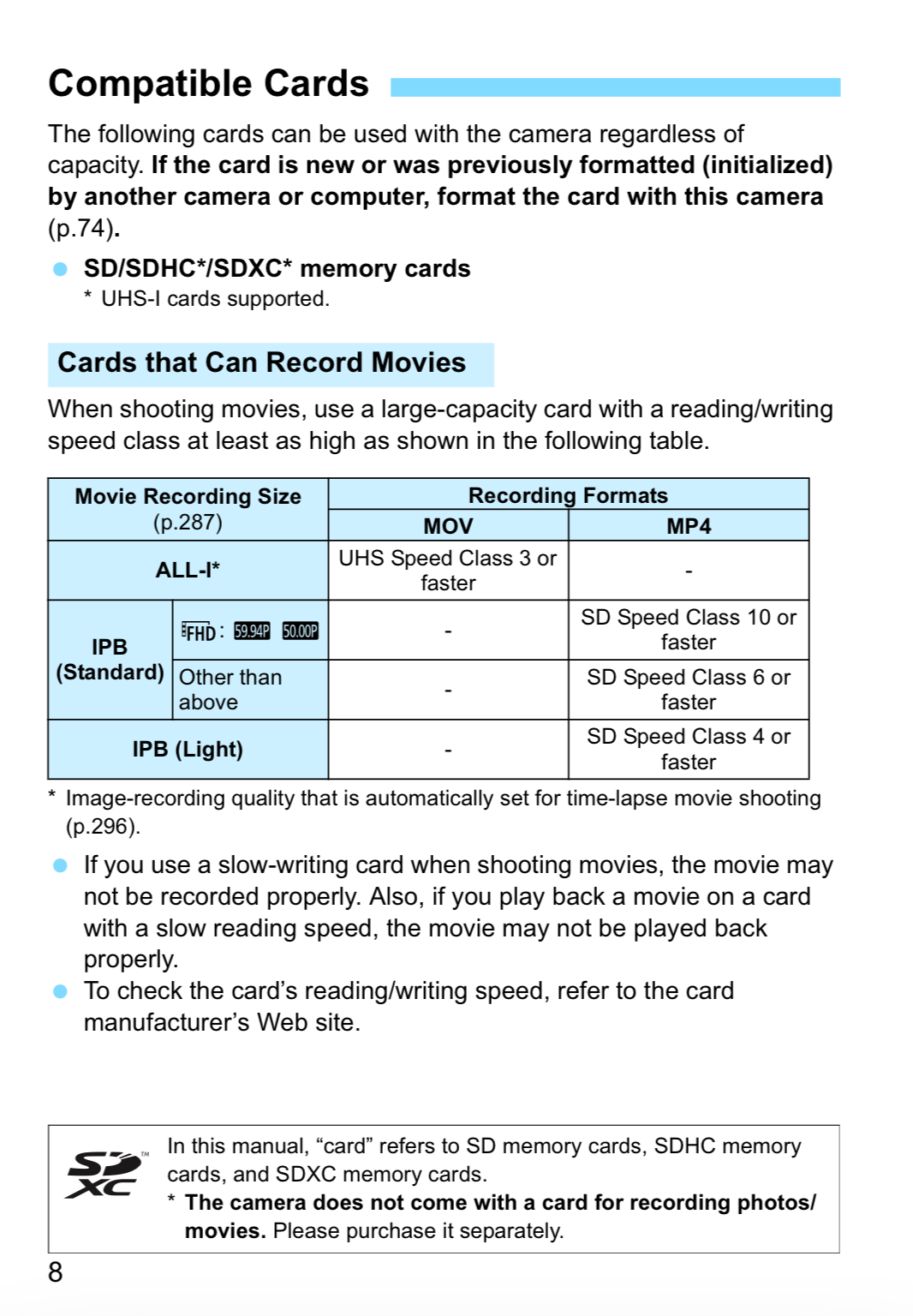 "Doctor told me to get out and walk, so I bought a Canon."
Report Inappropriate Content
Message 6 of 12 (1,515 Views)
Reply
4 Kudos
BurnUnit
Reputable Contributor

Sometimes, even what appears to be a full-size SD card can give you the same kind of grief that a Micro SD card and adapter can.

These pictures still crack me up!

You came asking for a solution to a problem.  You received the correct answer.

"It is an adaptor problem.  Period.

The micro-SD cards with adapters are not recommended for use in Canon DSLRs.  If you use a full size card, all of these issues will go away."

"Can you guarantee that? In writing?"

You received it for free and now need to decide whether you want to accept it.

Oh I feel a mob coming on.

Listen, Or read, to the end, because I'm not arguing with any of you. Adapters are a problem. I know it, I get it. That wasn't my question and Waddizzle's answer doesn't answer my question.

His answer was a pat answer. It's a generalization, which may or may not be the solution to my problem. But it was presented as an absolute.
quote: "If you use a full size card, all of these issues will go away". Since I have had these issues with full size cards as well, his/her credibility goes right out the window with that statement. And my first thought is, if you had to put your own money on the line would you make the same statement. Or would you pad it with softer language. "It will probably fix your problem". or "You will have fewer problems".

The reason my question was so long was so you could get a better picture of my problem, that my cards work in newer cameras, but not in the older one. Was there firmware updates that fixed this problem? Are dirty camera contacts a thing? Are there cleaners for them?

When troubleshooting a problem you don't just stop at the first obvious answer. As a computer programmer I know that troubleshooting rarely stops with the first 'fix'. So I put in a real SD card, and it still doesn't work. Now what? @waddizzle said it would work. I guess I got to throw my 6D away now.

@kvbarkley I agree and that is my point. It is an "unguaranteable" statement.
>>As you can see they can choose any moment to cause an issue.
I don't believe in coincidences, and two at once with three different cards is too much. AND it's just with one camera, not all cameras. Adapters contain no electronics. They're just gold-plated circuits to move electrrons around from pin to pin. Which is why I asked about the pins inside of my camera. They're more likely to blame in this instance.


@waddizzle You quote a retail website to PROVE that SD cards are different than Micro SD? You know that's just marketing right?
On the picture of the manual addressing memory cards, there is no mention adapters. I have a manual too. It says SD OR SDHC OR SDXC. the micros have the same markings on them, so the manual is vague about adapters. And a quarter of a million pictures on micro cards bears out the fact that they do work. The question was not "are adapters a good idea", because I admit that they are a compromise between convienience and security. The question was one of support and firmware and possibly dirty camera contacts.


@BurnUnit Yet another problem to watch out for.

@ebiggs1 >Really? Smiley Indifferent You received it for free and now need to decide whether you want to accept it.
Really? Maybe you can bring some more friends with pitchforks and torches. You've added nothing useful to the conversation.
Report Inappropriate Content
Message 9 of 12 (1,381 Views)
Reply
0 Kudos

This is the absolute answer: Send your camera to our Factory Service Center to be evaluated. If they determine your camera is in working order, it's not a camera problem. It's a card problem.

You can set up the repair from within your My Canon Account at canon.us/account

You can learn about the different maintenance options HERE.