Auto-suggest helps you quickly narrow down your search results by suggesting possible matches as you type.
Showing results for
Search instead for
Do you mean
Reply
Topic Options
Highlighted
gacemite
Occasional Contributor

Please I need help my 5d mark iii showing battery error while the battery is fully charged, and I tried the same battery with 7d its work fine

Do you have more than one battery?

How old is the battery?

Is it a genuine Canon battery or 3rd party battery?

Have you checked the battery status ( 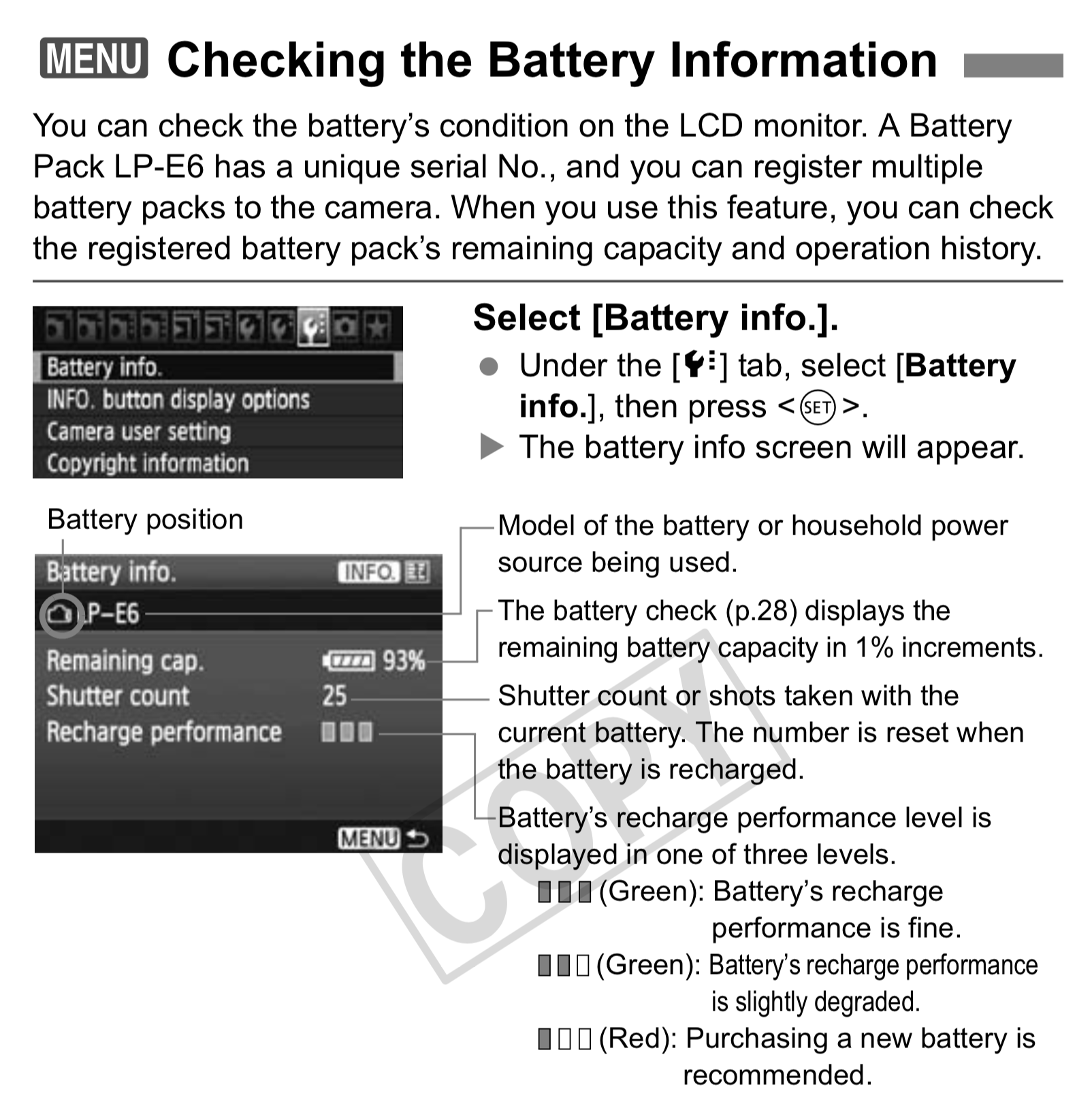 Both the 5D III and the 7D have the ability to monitor battery status.  You might want to compare them.

If it's an old battery, it's possible that it's warning you that while it may be "fully" charged, the full charge capacity of an old battery isn't very good -- and it's just alerting you to that.

Batteries are like the tires on your car... they don't seem to wear much on just a single trip... but add up all the trips and eventually the wear is noticeable.  Except in battery technology both age and the number of recharge cycles count.   The electrons like to move around and it's acutally not good to store a battery too long without using it.  I number my batteries and try to swap them so each battery gets some use and nothing sits unused too long -- and at the same time I'm also not using the same battery over and over.

After about 3 years... I know I'm probably nearing the end of a battery's useful life (though I've pushed it longer, I know I can't really expect much longer).

"Both the 5D III and the 7D have the ability to monitor battery status."

Provided you are using real deal Canon batteries. Some third world batteries do not have that ability build in them.

Thanks so much, I used the original battery now the camera is not even coming up at all
Report Inappropriate Content
Message 4 of 13 (4,174 Views)
Reply
0 Kudos
Highlighted
ebiggs1
VIP

Thanks one again, I removed the SD card From the 5d mark iii to use in another camera, and I try to on the camera and the camera power on, when I insert the card the camera is off, then I remove the card and battery then the camera on again, please what should I done
Report Inappropriate Content
Message 7 of 13 (4,075 Views)
Reply
0 Kudos
Highlighted
Waddizzle
VIP

@gacemite wrote:
Thanks one again, I removed the SD card From the 5d mark iii to use in another camera, and I try to on the camera and the camera power on, when I insert the card the camera is off, then I remove the card and battery then the camera on again, please what should I done

Are you saying that  the problem has stopped?  I do not understand your description of events, but if it is working, then I would worry about it too much.  Be warned that it is usually a bad idea to swap memory cards between cameras.  It doesn't matter if the cameras are the same model.  It is a bad practice.

Reformat the memory cards in the camera that is using the card.  If it is the SD card, be sure to perform a "low level format".

"Doctor told me to get out and walk, so I bought a Canon."
Report Inappropriate Content
Message 8 of 13 (4,071 Views)
Reply
0 Kudos
Highlighted
gacemite
Occasional Contributor

What am trying to say is that, any time memory card is inserted into the camera, the power will off, the camera only power on without memory card
Report Inappropriate Content
Message 9 of 13 (4,053 Views)
Reply
0 Kudos
Highlighted
TCampbell
Esteemed Contributor

If the camera wont power up with the card, then reformat the card.  You wont be able to reformat it in camera, but you should be able to reformat it on your computer ... which hopefully allows the camera to start with the card in the camera.  Assuming that works, then I would still perform another low-level format using the camera to do the format (cards should always be formatted using the camera where the card will be used.  Do not swap cards across devices -- a card would basically be designated for use in that camera only.)

If the memory card is 32GB or smaller then you would format it with a FAT32 filesystem.  If it is larger than 32GB then it needs an exFAT filesystem.  exFAT can be tricky because I've noticed different OSes tend to use different blocksizes and some devices don't necessarily support just any blocksize.

If this doesn't work, then you need to get a new memory card.