Auto-suggest helps you quickly narrow down your search results by suggesting possible matches as you type.
Showing results for
Search instead for
Do you mean
Reply
Topic Options
Highlighted
Skirball
Respected Contributor

I looking for information on the actually raw file and the control of the colors. I once shot a concert in raw and under neutral and I it seems like I lost all the color. In lightroom I tried to turn up the colors but all I got was a red pink color on the models skin. I wanted to know why I seemed to loose all the other colors?

When you import your RAW files into an image processor the images will seem a bit muted. In fact, many programs will first show you the preview image JPG, which has preset enhancements (e.g. color saturation, sharpening, etc) already applied.  After a second the RAW will load and you'll see a more muted version.  That's because the RAW has no enhancements applied.  You "develop" the RAW as you see fit, and it's expected that most photos will require some amount of adjustment to basic levels, color saturation, sharpening, etc.

As to this specific problem of your at the concert, it's hard to say without seeing.  There are many things that could have gone wrong.

Your choices of post processing could have been poor.   Some people simply turn up saturation to make pictures look more vivid; often it looks terrible.  You have to understand what the variables do.  And with time you will get better at loooking at a RAW image and knowing what is off.  One of my first recommendations to those new to post processing - BACK OFF THE SATURATION SLIDER.  It's over-used.  Most editors now offer some sort of vibrance adjuster, which is pretty much saturation without skin tones.  So if you're going to blow out your colors at least the people in the photo don't look like aliens.

Also, concerts are dark, which, in itself throws off the color.  If it's really dark you're never going to get normal skin tones, but they can be adjusted somewhat - again, go to WB before specific color enhancements.

My biggiest problem is that the lights are often very bright. Would using a grey card help? Also, Is the picture I am seeing on the camera view screen is actually the jpeg picture? If so that explains a lot?

If by lights you mean highlights, then that has nothing to do with the colors, that's the exposure.  Most likely the composition has such extreme lights and darks that it can't get them all into a single shot.  So the camera aims for the middle and lets the highlights blow out and the shadows lose detail.  It's probably the most common difficulty in photography, and photographers use numerous techniques (flash, HDR, screens/shades/blocks, reflectors, re-composing, RAW, moving to Nikon, etc.) to battle this issue.

Yes, the image you see on the cameras LCD is a jpg.  Even if you shoot RAW you camera produces a small jpg that is used for the preview image and is what shows up first in a photo editor.  It would have any special settings you applied, but they won't be in the RAW file.

You can't white balance stage lights because it's not just one color temperature of light.

Stage lighting is a bit like this because there are often red, green, and blue floods.  Ideally the point of these was that for theatrical lighting, they could "white balance" the whole scene because the lights where all aimed in the same place.  So by slightly turning up the red and turning down the blue, they could "warm" the scene.  I've noticed that in some venues, they don't converge the lights (the reds, blues, and greens are not necessarily even pointing in the same place.)   You'll need to do your light adjustment artistically by what you like as there is no "correct" (since the lighting was not set up to create "white" light nor anything even remotely close.)

Take a look at the image below: 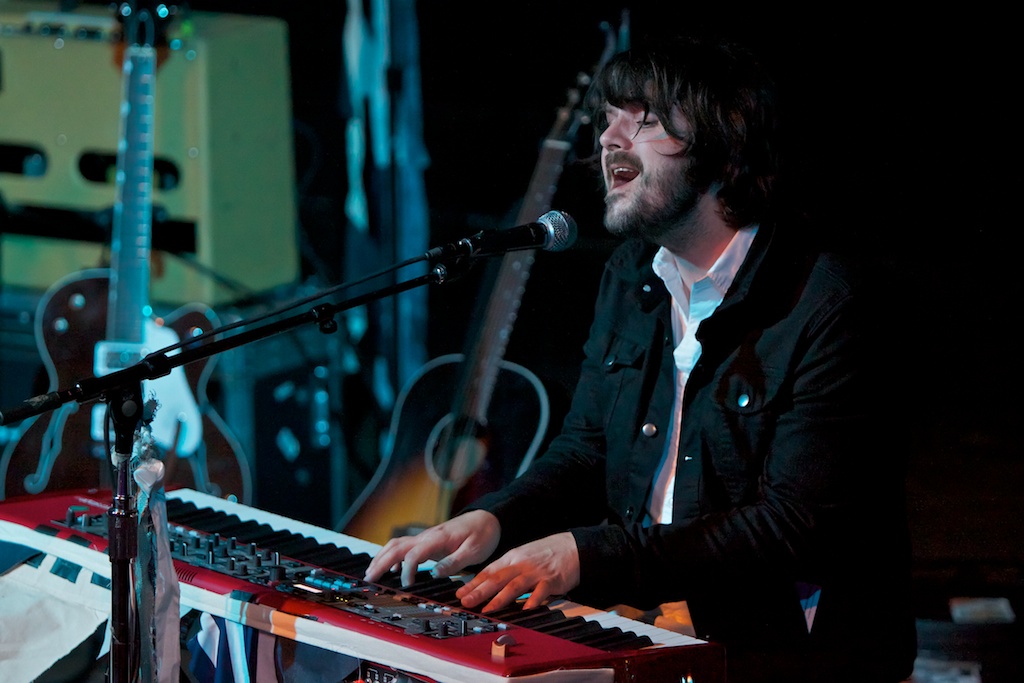 Look carefully at the keyboard.  We know all the keys are the same "white" color in real life.  But the keys at one end of the keyboard have a blue/green color cast while the keys at the opposite end have a warmer orange cast.  You can see the same effects if you look at the collar area of his white shirt.   In the end, I look at the skin tones on his face and do the best I can with it.

The human eye is mostly sensitive to greens because that's smack in the middle of the visible light spectrum.  We are less sensitive to violets and blues (especially violets) and also less sensitive to reds.  A digital sensor with no bayer mask is technically somewhat equally sensitive to wavelengths across the range, but the camera has a a "bayer mask" overlaying the sensor which is has more green than anything and on top of that, the filter in front of the sensor trims light transmission for the wavelengths on either side of the middle of the spectrum.  This helps the camera more closely approximate the sensitivity of the human eye so the photos look more "natural" to us humans (despite the fact that our eyes don't perceive all wavelengths of visible light equally).

However, what the camera does just the best approximation of the human eye (and we actually do know that different humans have varying levels of sensitivity ... you might actually see more violet than I can see.  Also this changes with age.  The amount of violet you saw when you were 10 was probably stronger than the amount of violet you can see when you're 50.)    A camera, might be a little more sensitive to, say, reds than it is to blues.   The idea behind the color checker tools is to provide various squares of colors to get the color values accurate (not just the white balance.)

sounds good to me. Thanks