Auto-suggest helps you quickly narrow down your search results by suggesting possible matches as you type.
Showing results for
Search instead for
Do you mean
Reply
Topic Options
Highlighted
wq9nsc
Reputable Contributor

I told them that had better not happen but if the Kia Soul I rented as the 1 way trip car to Bowling Green fell into the ground I wouldn't be too worried.  Central IL is dead flat but on the interstate heading towards Champaign/Urbana the Kia would downshift a couple of times going up every little rise on the interstate and I think Anna was a little embarrassed to be seen getting out when we parked the Kia at the NCM.  Driving home in a 650 HP Z06 was a slightly different experience

I was at the plant several times but that was my first visit to the museum.

I am very surprised the book didn't sell well because a lot of Corvette owners are fanatics over every little bit of memorabilia.  A lot of new owners were upset when their dealer threw away the disposable transport cover during PDI.  A museum worker told me that one new owner insisted they bag and save the shavings from drilling the holes to mount the side skirts on his C7 Z51.  The selling dealer sent me a complimentary copy of "All Corvettes are Red" after I placed my order.

And on edit, rpfankuch-you have chosen an excellent program.  Good luck with your continued studies!

Think twice about the 5D2.  Its already out of support and Canon willl not repair.  That doesn't mean MidWest Camera won't help, but it limits your options depending on what you find.

A little more money and you can buy something a little newer.  Any camera is better than no camera at all.  Stated by someone here wiser than I.  (Ernie).

Canon Refurbs are an excellent place to start.  Some of my gear is refurb and I cannot even tell.

Rodger I'm very familiar with the Vette crowds apetite for anything to do with "their" Corvette. I worked at one of the better local dealers back in 78 when the Silver Anniversary model came out thru till the 86 model year. That dealer was chosen to do the clean up work on the first 2 all new 84's to be shown in Canada at our International Auto Show. The cars weren't on sale to the public yet & I spent a big part of that day phoning all my Corvette friends so they could get a sneak peek. As for your car, NICE, and I especially like the colour choice because I painted my (daily driver) 86 a similar colour.

Re my friend's book he also published a quarterly magazine aimed at the 68-82 crowd called Shark Quarterly & I wrote how to articles for it. Unfortunately the only real advertiser was Mid America Corvettes who also tried marketing his book but it needed more marketing / advertising but it was before all the internet forums we now have, Facebook etc. I think it would have done much better sales wise about 10-12 years ago than it did when wrote & made available which was in 1999.

"A skill is developed through constant practice with a passion to improve, not bought."
Report Inappropriate Content
Message 13 of 24 (203 Views)
Reply
0 Kudos
Highlighted
cicopo
Esteemed Contributor

One more thing. Since we seem to be car guys (or gals) my screen name is from a license plate for my long ago sold 69 Camaro. When I started my business in 86 I mainly restored Camaros & one I bought as a parts car turned out to be the remains of a COPO Camaro so I semi restared it before learning it was the real thing. Once I learned what it was & had official documentation from GM I ordered a personal plate for it. We were only allowed 2 numerals then & the 0 or letter O were considered numerals so I ordered CI for "cast iron"  COPO which separated it from the ultra rare aluminum block ZL 1 versions.

"A skill is developed through constant practice with a passion to improve, not bought."
Report Inappropriate Content
Message 14 of 24 (194 Views)
Reply
0 Kudos
Highlighted
wq9nsc
Reputable Contributor

The internet has made it far simpler for small companies to market products and it gave birth to the "self-publishing" movement which has seen quite a bit of success.  I would have expected that book to sell very well at the NCM but maybe it didn't have as many visitors back at that time.

One of my uncles owned a Chevrolet dealership back when even very small towns had a car dealership and he took me for a drive in a Corvette back in 1968 when we were visiting for a family reunion.  My father had a Nash/Hudson dealership prior to WWII as a very young man and another relative had the Ford franchise in the village.  The joke was that no matter what you drove to a family reunion you were going to anger some of the relatives.  My father remained loyal to the brand he once sold and we took a lot of vacations in a series of Rambler station wagons and I took my first driving test in an AMC Ambassador wagon.  The first non-AMC he bought was an International Harvester Travelall however that year there was a big strike at Harvester works and they reserved the production of the largest member of their small V8 family (a 392 CID) for their medium duty trucks and his Travelall came with an AMC  produced V-401 after they made a deal with AMC.  Fate, I guess.

I was almost ready to get the Z06 out since a rain washed the salt off of the roads but now 3 to 5 inches of snow is forecast starting tomorrow so it will be the tractor and not the Corvette that comes out to play this week.  A friend piqued my interest in astrophotography so I decided to use some of the B&H bonus cash I have built up as partial payment for a Celestron telescope.  It arrives just in time for several days of snow

I will have plenty of time to read the instruction manual before I can use it...

I know about those Ramblers too. My father was a Rambler man & a station wagon at that. I learned to drive using it plus an Austin A 90 with a 4 on the column shifter. As for snow it's scheduled here too, starting tomorrow night thru Thursday. I've built my own secret weapon to handle it.  The cab is heated & the snowblower has it's own 10 HP motor. Still in testing but working well. 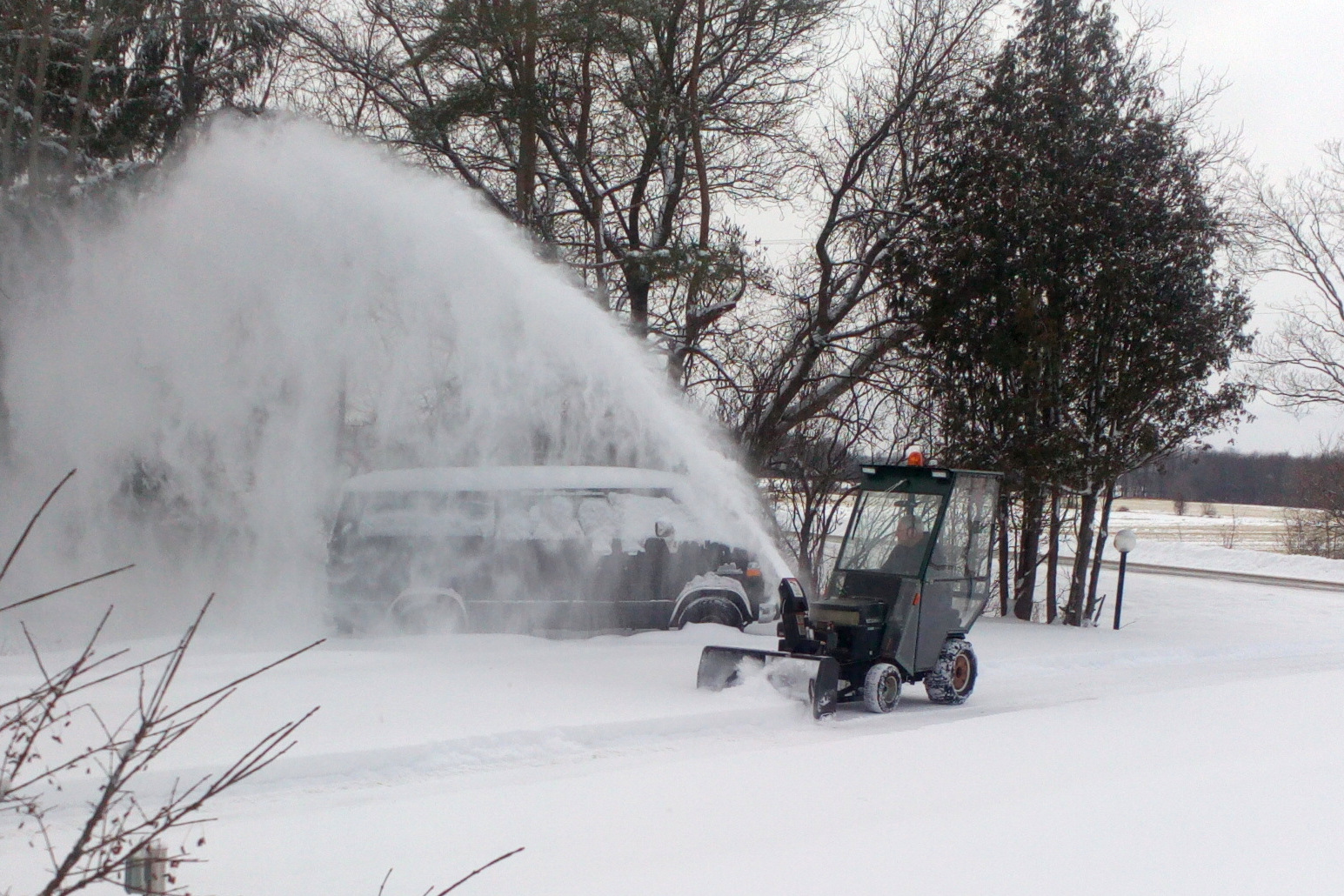 "A skill is developed through constant practice with a passion to improve, not bought."
Report Inappropriate Content
Message 16 of 24 (177 Views)
Reply
0 Kudos
Highlighted
wq9nsc
Reputable Contributor

VERY Nice setup Larry and a heated cab would be very nice!

The pictures below are from a snowstorm 9 years ago this month and some of the drifts were 7 feet tall.  It was fun for a few days but the storm was followed by a long cold spell.  I grew tired of the aftermath of that storm long before my daughter did.

Tomorrow won't be so bad and Spring isn't that far off 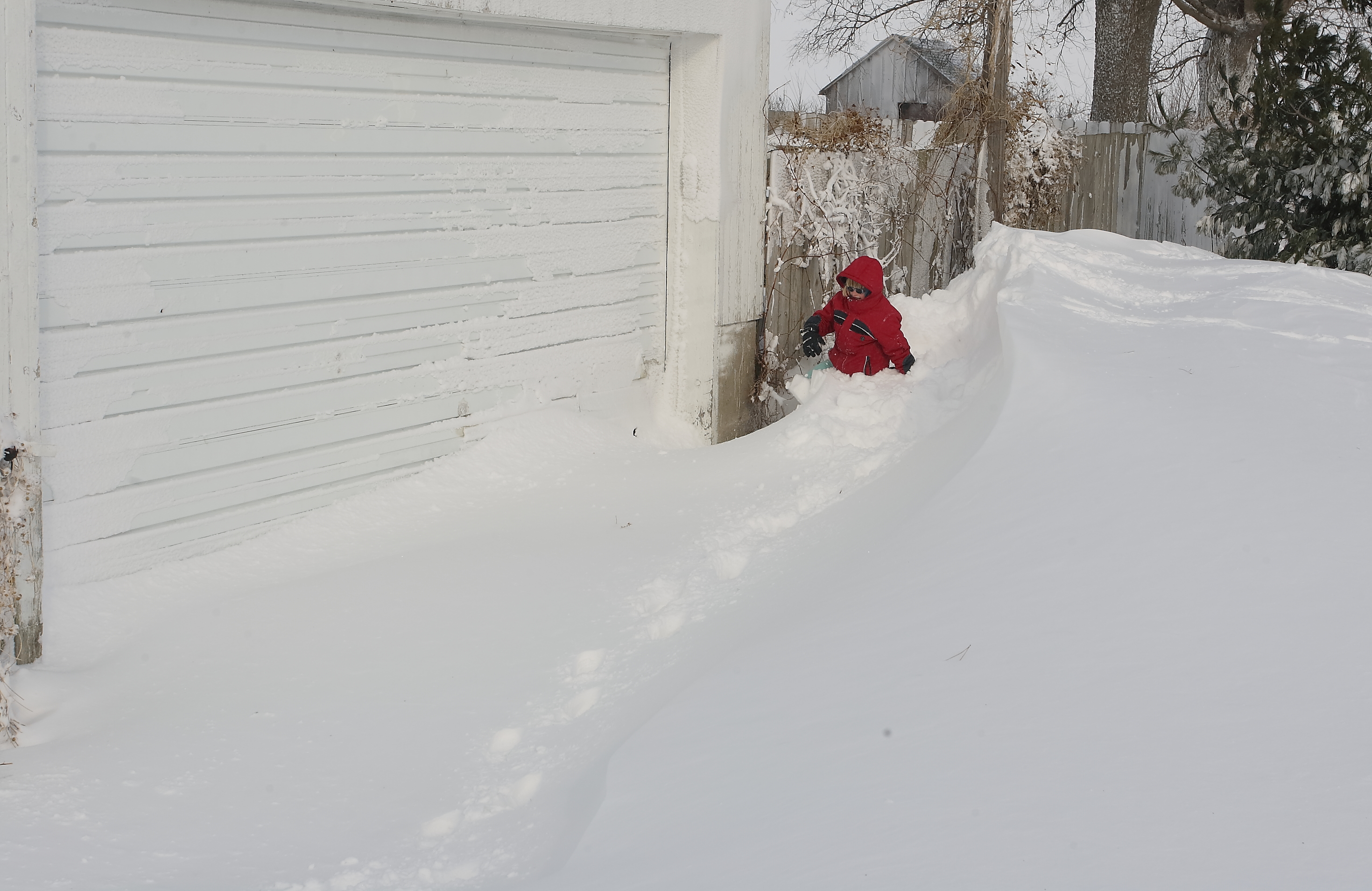 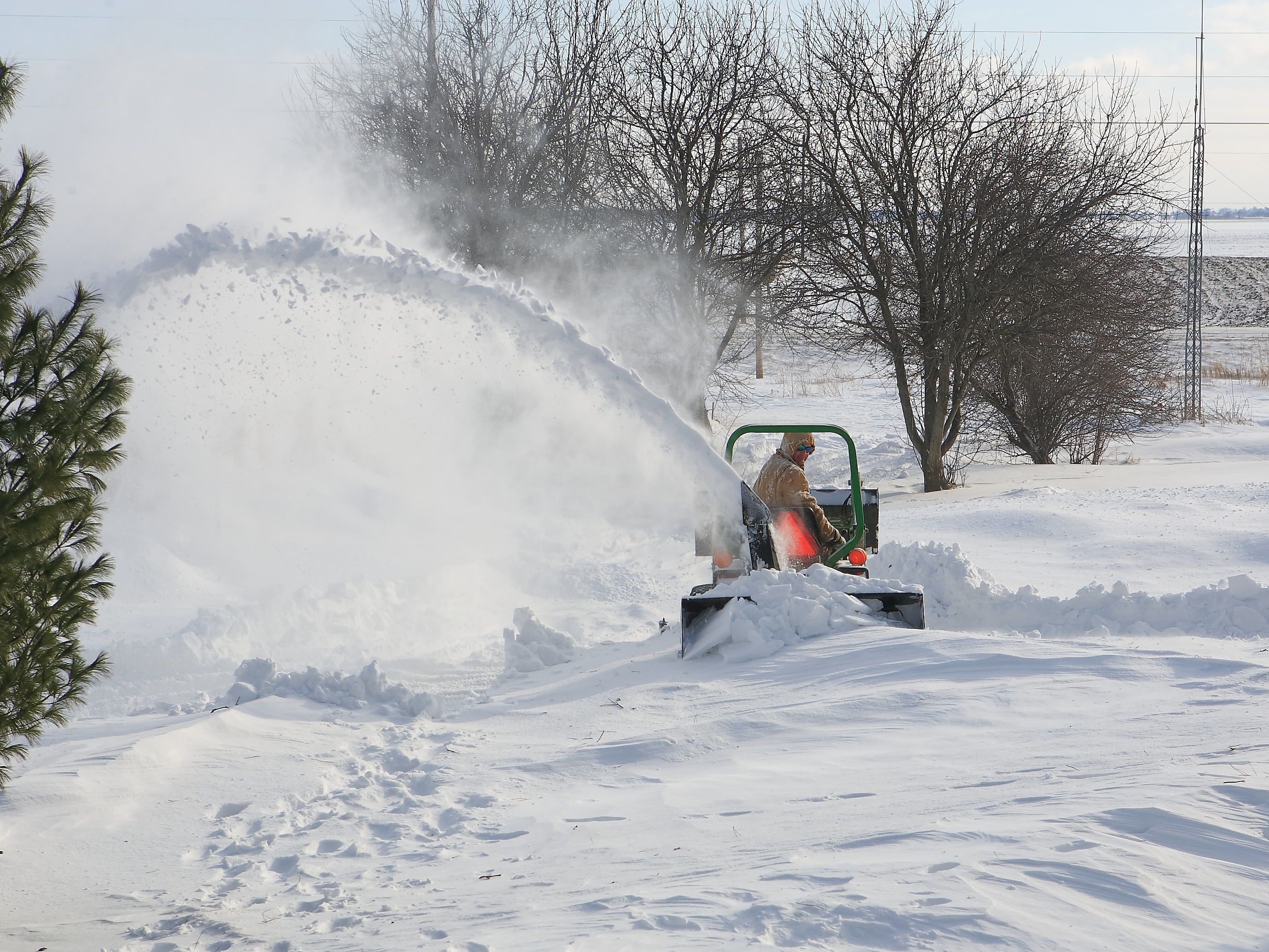 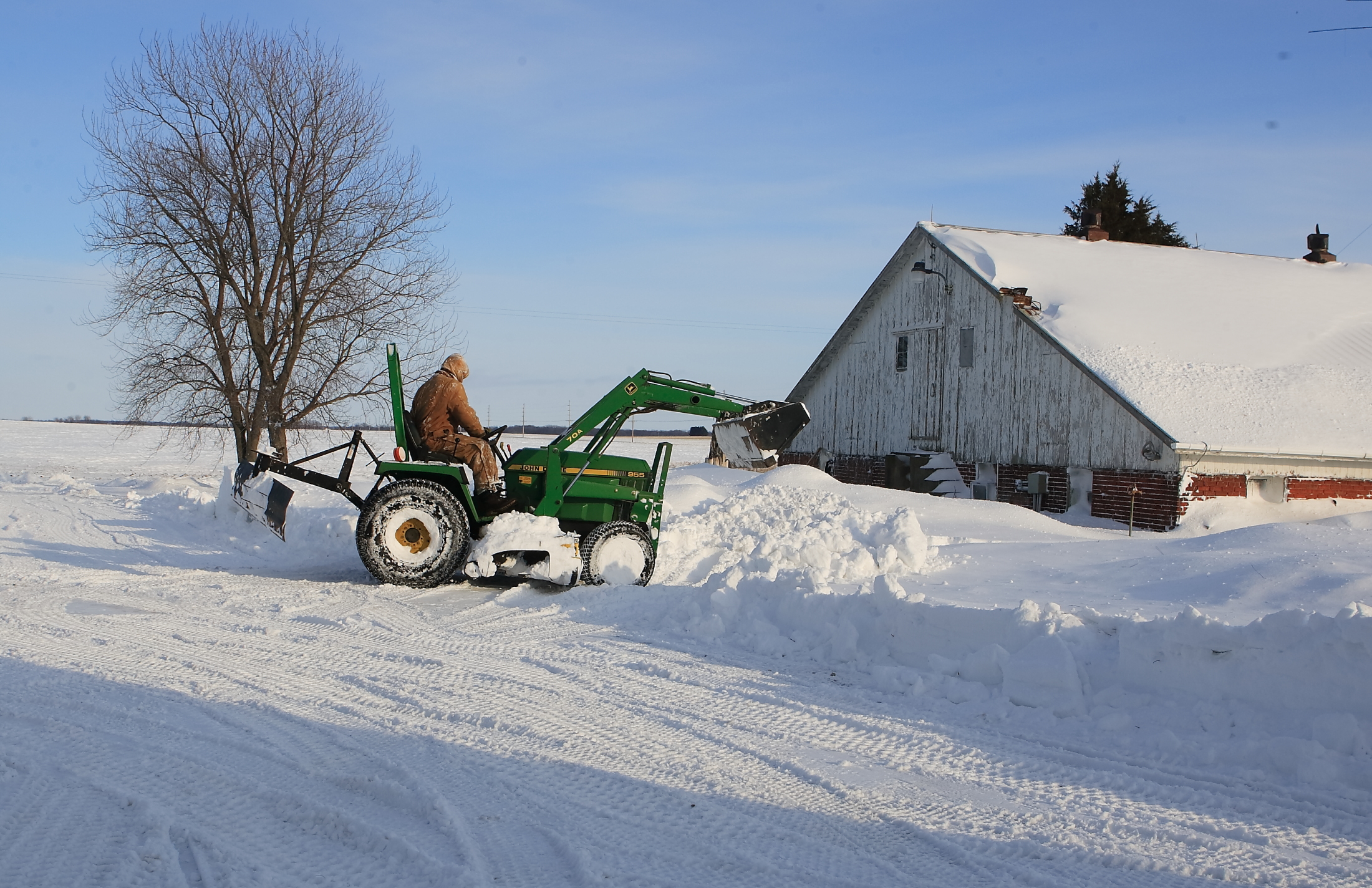 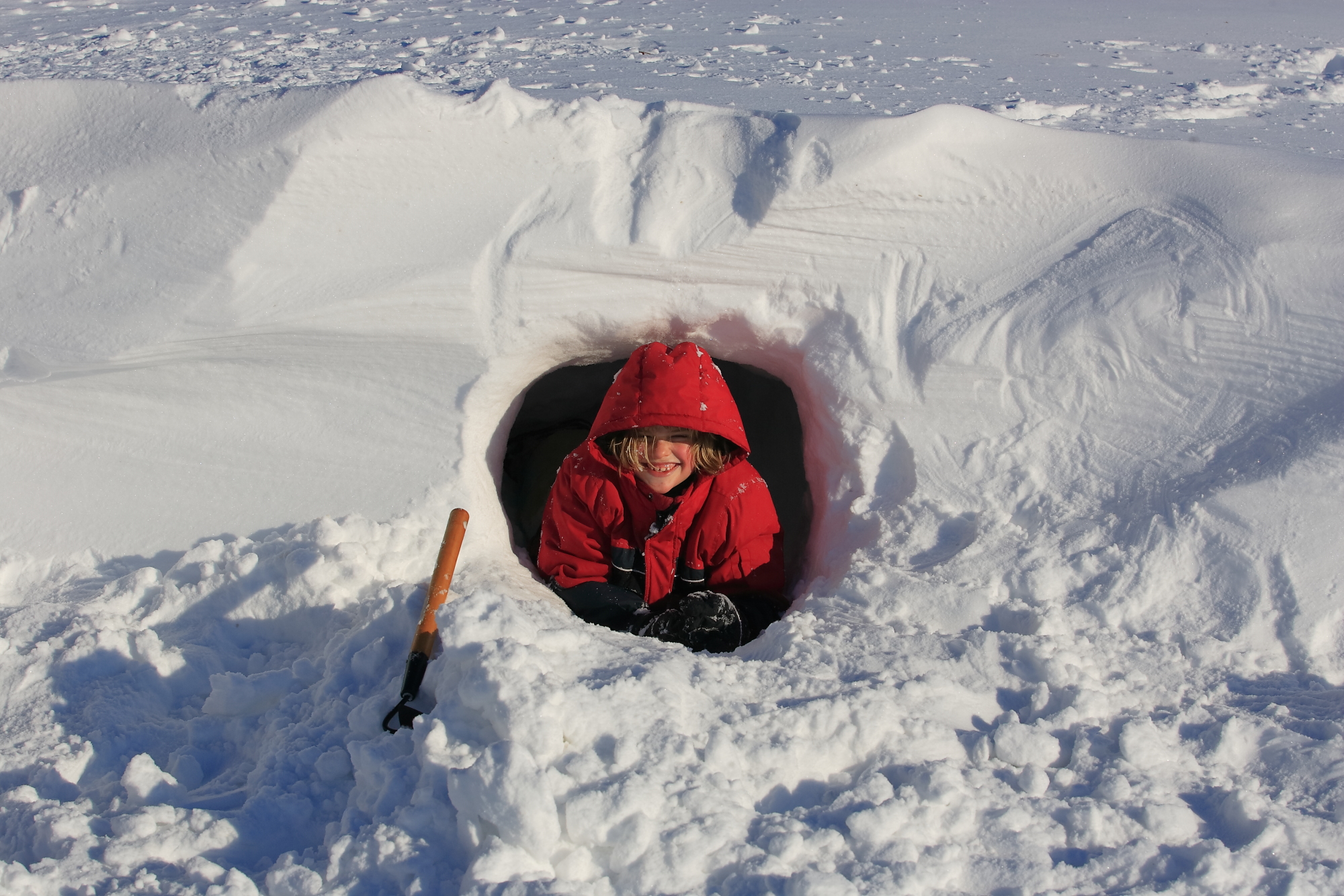 You look like you had the equipment needed for that storm. I live on a ridge between farm land to the west that's wide open & that's where the prevailing wind comes from most of the time. to the east it's been forest & then a small open area & then my storage building & finally a tree line so not much drifting around the driveway when it's an east wind. Big drifts are relatively common here & between them & the severe cold we can get and the need to stop wrestling with my walk behind snowblower (which has had a toll on my right shoulder) that inspired the building of my cab. Once started I realized I had some used VW gas heaters that were part of a batch purchase of VW stuff I bought. I was able to learn how they worked & decided to convert one to propane (for a number of reasons) & it works great converted. The exhaust from it exits out through the roof of the cab & the heated air gets blown across the windshield. It doesn't need to run very long before I have to turn it off. 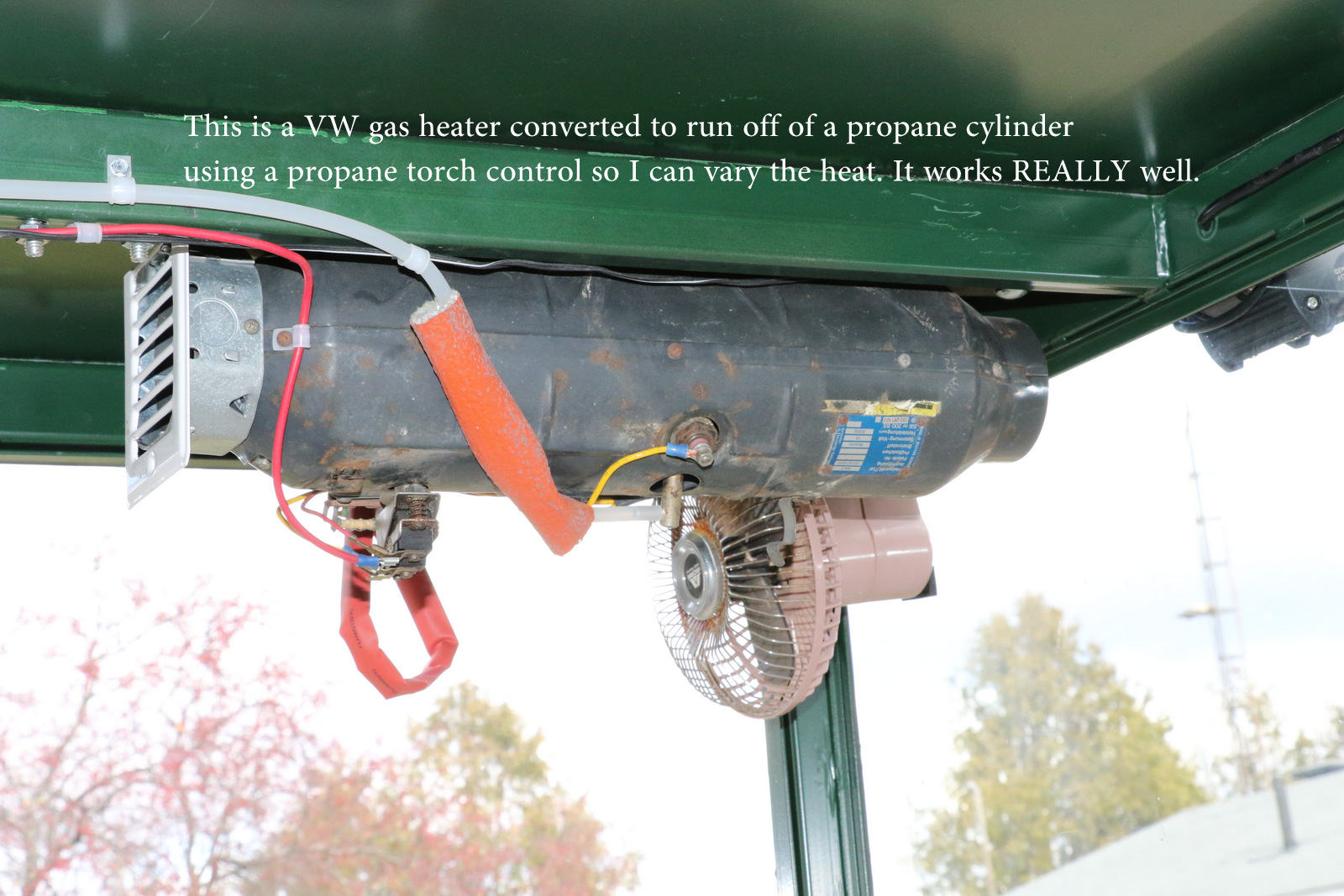 "A skill is developed through constant practice with a passion to improve, not bought."
Report Inappropriate Content
Message 18 of 24 (154 Views)
Reply
0 Kudos
Highlighted
ebiggs1
VIP

I am in total agreement with Rick

"Think twice about the 5D2.  Its already out of support and Canon willl not repair."

Again any camera you have is better than one you don't have. But keep in mind newer tech trumps all most of the time.

Photos are made by the lens.  If your T6 isn't giving you what you want it could be the glass. A 90D or evee an 80D would be good choices if you still think you need to upgrade the camera. You can sell your T6 for a few bucks to help the purchase since it is still reasonably new.

What  lenses do you have exactly?

I think we either stumbled into the Motortrend forum or the snowblower forum or perhaps the Twilight Zone!