Auto-suggest helps you quickly narrow down your search results by suggesting possible matches as you type.
Showing results for
Search instead for
Do you mean
Reply
Topic Options
Highlighted
Adrianpz1
Occasional Contributor

When I look through the viewfinder I see some little pieces of trash. The mirrors are clean, and cameras been aired out. Need some help in how to clean or do I need to send it in somewhere.
Thank you from Texas

To ensure the most accurate information is provided, we will need to know the camera model you are using.

The trash particles do not appear in the photos by the way.
Report Inappropriate Content
Message 4 of 16 (3,728 Views)
Reply
0 Kudos
Highlighted
jrhoffman75
Honored Contributor

They are most likely dust particles on the bottom or top of the focusing screen. Since you said they don't affect picture quality it is up to you if you want to spend $ to remove a nuisance that's not doing any harm. You are probably looking at a signifcant fraction of the camera's value if you have to send it in.

You can try blowing out with a squeeze blower (DO NOT USE COMPRESSED AIR CAN) but be careful you don't hit anything with the nozzle. You might be able to remove the specs from the focus screen.

Yes one fragment is a hairlike. A few spots are dust for sure. I tried to blow them out but no luck. I have no idea how they would pass through to get somewhere I can't reach.

Using compressed air to blow out the interior of the camera can blow dust into the area above the focusing screen.  The focusing screen is not "sealed" -- so while dust and debris probably wouldn't wander up there on it's own, a good blast of air can send things flying everywhere.

It is possible to remove the screen (there are 3rd party companies that make optional focusing screens with different types of focusing aids, gridlines, etc. etched into them.) and they provide instrcutions on removal and replacement.

But this is not normally the sort of thing you'd want to do to your camera and you risk damaging the focusing screen.  They are very easy to damage and normally should not be cleaned (they should never be touched because if you get skin oils on the frosted surface you'll probably damage the screen trying to clean it off.)

People who work on them normally wear gloves (latex "surgical" type gloves) to avoid getting any skin oils on the screen, and they protect the reflex mirror (to avoid scratching while removing or inserting a focusing screen.)

I probably would just put up with the dust and not bother to try to clean it out. 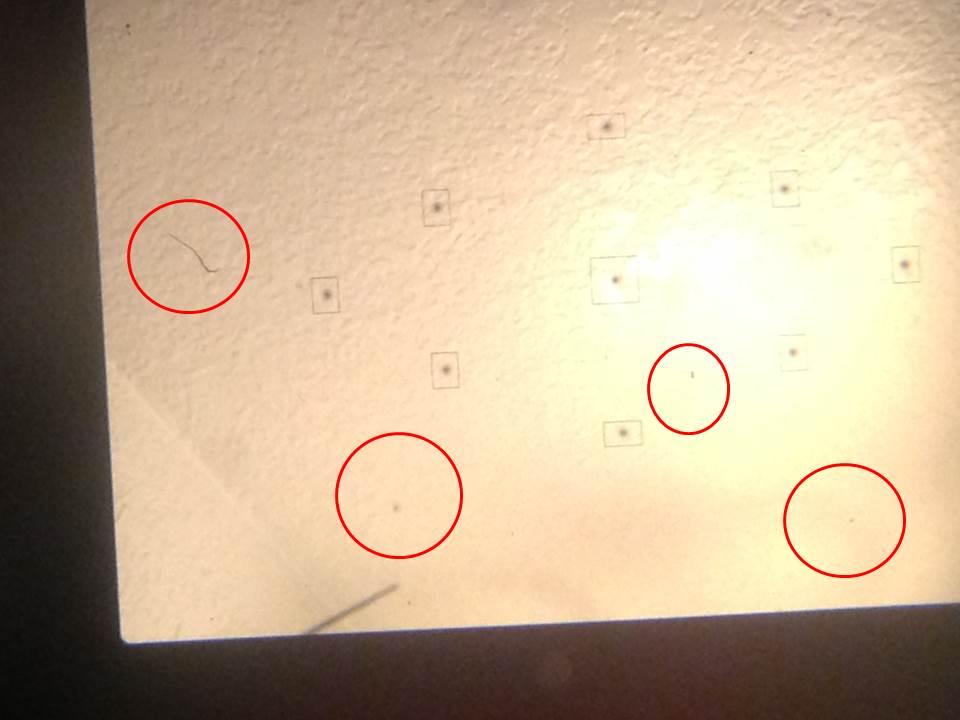 I used the rocket blower to try and flush it out but still wont budge. I havent messed with the mirrors si I think it might be beyond the mirrors.

When you look through the viewfinder, you are actually looking at an image being projected onto the focusing screen (sort of like a rear-projection TV screen).  This would sort of be like having dirt on the "inside" of the panel of a rear-projection TV -- it's not on the surface you can touch and would require removing the focusing screen to blow the dust off the back of it.

When you take a photo, the reflex mirror swings clear and the light path goes directly from the back of the lens to the imaging sensor without ever going through the focusing screen -- hence it will not affect your images at all (you could have rocks up in that chamber and it wouldn't affect the images.)

While it is possible to remove the screen and clean it, it must be done with great care because it is easy to damage that screen (especially if you've never done it before and aren't sure how to remove and re-insert the screen.)  Since the dust wont show up in an image, I would leave it alone.  If you choose to attempt clean it anyway, it's your camera and your choice to accept the risk.  But it could lead to a more costly repair if something goes wrong.