Auto-suggest helps you quickly narrow down your search results by suggesting possible matches as you type.
Showing results for
Search instead for
Do you mean
Reply
Topic Options
francosh
New Contributor

I've a Canon EOS Rebel T3i. I changed my camera in a Pin hole digital. Because of it, i have to make photos of 1 min to 5 minutes. Is it possible to press only one time on the shutter Button for 5 minutes and press again on the shutter button to end the time of the photo?

Actually i've to hold the shutter Button all the time and it's very long.

I'm asking because i want to experimente photos of 2 h.

Thank you for your advices.

You need a wired remote shutter switch, with a built-in intervalometer.

There are a couple of versions of the remote release.

One is a simple button but it does have a 'lock' switch.  You press the shutter button (on the wired remote) and then 'lock' it.  But it's up to you to monitor the exposure time.  You have to unlock the switch to release it at the end of your exposure.

The other is the intervalometer.  This remote release has a built-in timer and you can set the exposure duration (you can also program it to take a number of exposures as well as tell it how long to wait between exposures.).

With either choice, the camera shutter speed should be set to 'bulb' mode (which means the shutter remains open until the shutter button is released.)

2 hours is extremely long.  The sensor gets hot and that contributes to 'noise'.  You didn't mention what you're trying to photograph in such a long exposure.  There may be a better technique to get results depending on your subject.

Digital camera "noise" occurs when the camera's sensor picks up pseudo-random radiation that it can't distinguish from pixels of an image in the visible spectrum. It looks a lot like "grain" in a color film image, although the mechanism that produces it is different. (Think of an early version of ISO 64 Ektachrome, if you're old enough to remember what that looked like.) The longer the exposure (and/or the higher the ISO rating), the more noise you're likely to see.

That is very ok, i'm looking this effect in my photography right now. I'm passing from sharpe to noise!

Do you think a long duration shoot with a digital camera is a bad think? I know that with 35 mm that is ok, but digital is calculing the time, etc. Any chance that my camera can broke?

thank you very much for all your time explanation!

A few points about this...

Attempting a 1-2hr image will result in a completely white frame.  It'll be horribly over-exposed.  Also, 'stacking' filters can create reflections (ghosting) and in a short exposure it may not be noticeable... but in a longer exposure, the light piles up and those reflections can really stand out.

To image the Sun for any length of time, you'd want to use an "ND 5.0" filter.  I have to be careful here because several companies have taken some liberties with the definition of optical densities in these filters.  An optical density of 0.1 is equal to one-third of a photographic stop.  So an ND 0.3 is 1 stop, ND 0.6 is 2 stops, ND 0.9 is 3 stops, etc.    By that math, ND 5.0 is actually 16.66 photographic stops.

Here's an example of a shot I took at the last partial solar eclipse visible in the US.  This was ISO 100, f/5.6, and 1/1000th sec exposure -- but there's an ND 5.0 solar filter on the lens (a 300mm lens but this shot is heavily cropped in.  The Sun will appear much smaller at only 300mm using an APS-C sensor camera.)  BTW, on that particular day, we also happened to have the largest sunspot group of any activity during this solar cycle (the sunspots run in a cycle which is roughly 11 years long.  We are currently returning to solar minimum and the next solar maximum should occur in 2024.) 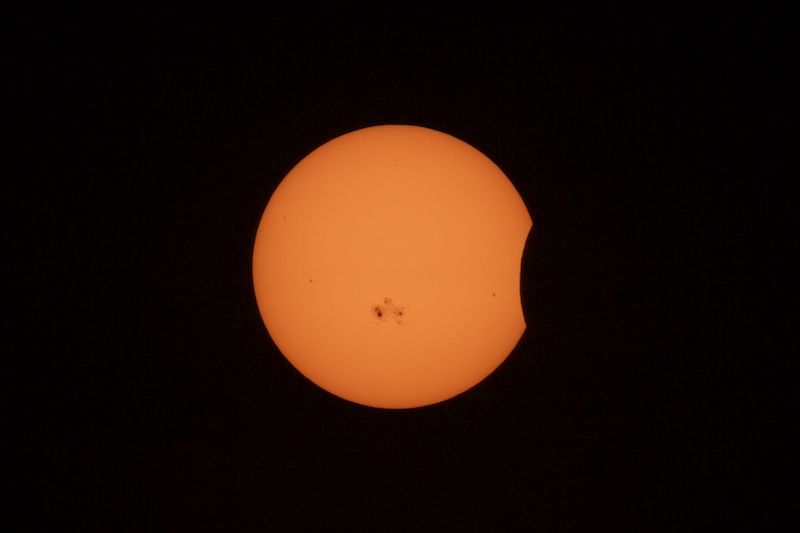 That's just a 1/1000th sec exposure.  But imagine how bright it would be at 1-2 hours.  You can see how 1-2 hours just wont work even with the filter.  But merging images will work because no single image is over-exposed.

ND 5.0 blocks 99.999% of the Sun's energy... rougly 1 photon out of every 100,000 make it through the filter.  When you hold this filter in front of most lights, it'll just be completely black, but the Sun shows up nicely through the filter.  The Sun pumps out a lot of energy both in the visible spectrum as well as in the IR spectrum (which our eyes cannot see).

Safety:  Under no circumstances should you look through at the Sun through your camera's viewfinder unless it has a proper solar filter on it.  The magnification can harm your eyes faster than would happen by just looking at the sun directly (which is also extremely bad).  The effect is not instant... it can take 24-48 hours to notice the damage.  Your retinas do not feel pain -- so as you damage them, you wont know it until it's too late.

This filter, however, creates another problem...

If what you really want is an image of the landscape with the Sun in the sky... but you want to show the path of the Sun, then using the ND 5.0 filter will render the Sun safe... but you wont see anything else... not even a little bit.  You'll just get the Sun on an otherwise black background.

Capturing this short of shot is more like capturing star trails at night.  To do that, we take numerous short exposures and then combine them to produce the result.  Since nighttime stars are very far away and thus appear as very tiny and dim points of light, we need longer exposures.  Typically those types of shots are captured by shooting 30 second exposures... continuously... for several hours.  Then merge the photos.

But with the brightness of the Sun, 30 seconds is much too long (at any f-stop).  You'd want to use a wide angle lens to frame the landscape with the path that the Sun will follow through the sky (we just had the vernal equinox... the Sun would have risen at precisely 90º East, set at 270º west, and it's highest point would likely have been 90º-your lattidue (e.g. if you live at 30º north latitude then the Sun would have risen to 60º above the southern horizon).  But that's only true on that particular day.  As we we approach summer, it will rise in the north-east, set in the north-west, and will rise higher in the sky (due to the Earth's roughly 23.5º tilt... gradually increasing the angle of the Sun just a little higher each day until we reach the first day of summer (summer solstice).  Software such as "The Photographer's Ephemeris", or "PhotoPills", or "Sun Surveyor" can help you plot the path of the Sun for any location on Earth and for any date.

Be aware that if you shoot at high f-stops, the aperture blades in the camera will create diffraction spikes (the Sun will appear more star-like) and it will appear more disk-like at lower f-stops.

You will then need to 'merge' all these images using software ... to create a single combined image.

BTW, does this have anything to do with the upcomming total solar eclipse of August 21, 2017?

Didn't the OP say he's using a pinhole body cap instead of a lens? That renders all this discussion of filter densities irrelevant, doesn't it?

Thank you very much Tim for this very well explanation!

Now i understand more this process and filter. I will need to make test about what i want to make in photo.

If i take a photo of the sky changing, without the sun with filter ND 400 or 1000 on a objectif. Will it create reflections (ghosting)?

Will it be interesting a long duration photo in this case? Also, I want to be sure before to begin this type of photo that duration shoot with a digital camera will not getting warm and hot the sensor... I think that with 35 mm that is ok, but digital is calculing the time. Any chance that my camera can broke with long duration photo?