"Why compare stuff except to show the OP doesn't need to buy anything new."

You are a person that would argue with your own shadow.

I think we long ago stopped helping the OP.

Thank you, Waddizzle and everyone else. I appreciate your time and sharing.

"What resolution are you shooting at?  What file format [JPEG or RAW] are you saving at?"

I feel more confident reading yours and the other contributors' responses.

"This is about as good as it gets with your gear and it's not that bad."

That caught my attention big time.  I used someone else's Canon; it was heavier but I didn't look at the model. I took a group photo. I had posted elsewhere that people photos were also causing me problems and not in complete focus many times. But using this person's Canon (he showed me the image), it had great sharpness. Heavier camera but my hand holding it didn't cause an issue.

So (knowing of course I need to continue to work on technique too) would another Canon or lens help (without having to spend 5K)? I will demo this time!

"Let's say you are only concerned with 'normal' sized viewing or prints.  True?"

I once aspired to be a professional photographer back in the days of SLRs. But I moved away from it; I just came back using digital last year. So I just have very high expectations. (And sometime it would be nice to try to get published

Does this mean that the sensor to the 3/4s is actually bigger the Rebel's?

Thank you so much for your time and help.

So the sensor is bigger; thank you That answered the question I just posted. Then I don't understand the 1.6 vs.2.

Yes; I do enjoy wide angle photography since the majority of my phots are outdoors: landscape or people.

Wondering if the light weight is actually hurting vs. helping. As I mentioned in another post, I did find with another hiker's heavier Canon.

Agian, thank you so much for your help!

"She doesn't have to throw money at her 'problem'. She just needs to develop her skills with the gear she has."

I am just questioning because even my people shots were not in the focus I thought they should be, even when a good distance (say 10 feet) from the subject.  So I am not understanding the issue. It was suggested I use f.8 so I have been doing that, but thinking of experimenting too.  But with my old Nikon SLR (which was heavier, btw) I did not have the focus issues.

So, I am confused a bit

I do agree there is still much to learn!

Oh, I remember you now.  Glad to hear from you again.

The sensor is bigger in any Rebel compared to a micro four thirds.  That is actual physical size.  However despite what somebody told you, a micro four thirds camera can be better (have better IQ) than your Rebel.  Some could be lighter , too.  I don't know their specs right off.

Not to try and confuse you even more but sensor size is only one consideration.  But as a general rule the larger the sensor the better, ... usually!  But the single most important thing in the area of IQ is the lens.  A better lens is usually better than a better camera.  Make sense?

The next main most important thing is how you post edit your images.  If you are not post editing you are not going to get the best your Rebel can deliver.  Software like Lightroom has the ability to do lens corrections.  All lens suffer from something and LR can reduce or eliminate the issues.  The size of the photo is also very important.  Viewing on a computer monitor is different than a actual print on paper.  Why do cell phones look good?  Because you view them on a small screen.

Does this look good to you?  Is it sharp? 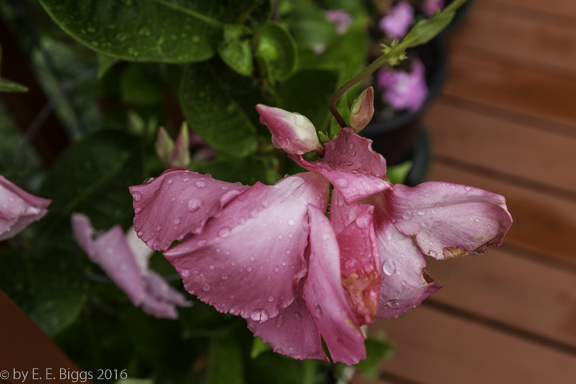 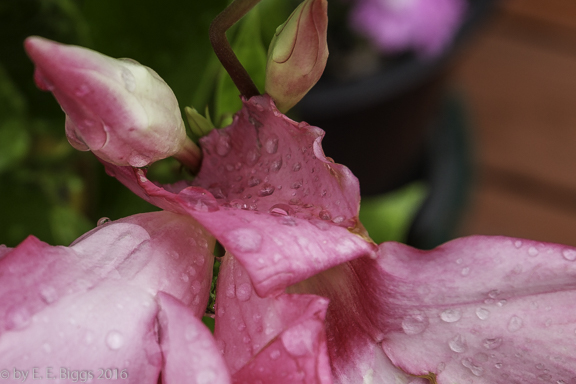 Both of these had 'lens correction' applied in Lightroom. The original was hand held with a leisurely 1/160 shutter and at f6.3.

In other words just a snap shot. I just walked by and thought oh that's a pretty flower and shot it. So you see, how you view your photos is important.

Now let's tackle another part of your query.

"... using this person's Canon ... it had great sharpness."    You don't know what brand and model this camera was? What lens did it have on it?

"... it was heavier ..."     Heavier can be an asset.  But not to the extreme.  I shoot exclusively with 1 series cameras now.  When I was working I had everything.  But in the end a 1 series is what I prefer because it is heavier and larger.  I would struggle using an SL-1.  I know as I have tried them before.

I think as I think about you, a better lens may just be what you want.  The kit lens with a SL-1 is the bottom of the line.  Virtually everything and anything will be better.  Sorry if that was cold but it is true.

I am not a great big fan of the Canon EF 50mm f/1.8 STM Lens but in this case it just might be the thing.  I can't believe I said that!  But it is a reasonably sharp lens and it is cheap enough it won't break the bank.  It will have much better IQ than the kit lens.  You should be able to see for your self if a better higher quality lens is for you. Plus it will be useful in light challenged situations later on.

Next get a post editor that does lens corrections.  DPP that came with your SL-1 will do if you don't want a better editor right now. I can't believe I said that, either!

Try these things and don't stay away too long.  Let me know how you are doing. OK?

So the sensor is bigger; thank you That answered the question I just posted. Then I don't understand the 1.6 vs.2.

Yes; I do enjoy wide angle photography since the majority of my phots are outdoors: landscape or people.

Wondering if the light weight is actually hurting vs. helping. As I mentioned in another post, I did find with another hiker's heavier Canon.

Agian, thank you so much for your help!

What does 1.6 vs. 2 mean?  That speaks directly about image size, [and angle of view].  Before DSLRs came along, we had SLR cameras that used rolls of 35mm film.  The SLR camera contained mechanisms to precisely advance the film, but more importantly the camera would expose a precise amount of area of film

The size and shape of the exposed area is the exact size and shape of the image sensor in a "full frame" DSLR camera, which are some of the most expensive DSLRs on the market.  By making the sensor the same size asthe  area of film that would be exposed [in a 35mm film camera] allows compatibility with older lenses.   Because the sensor was large enough to fill the entire image circle projected by the lens, the sensors were described as "full frame".  But, such a large sensor is costly to produce, especially one with high resolution.

So, manufacturers began making smaller sensors that were proportionally smaller than a full frame sensor.  Once you use a smaller sensor in a camera, the lens projects an image circle that is much larger than the sensor.  The sensor only "sees" just the center portion of the entire image.  The net effect of this arrangement is that the smaller sensor will seem to be zoomed in on the image compared to a full frame sensor.  The amount of apparent zoom can be measured as a ratio, and is frequently described as an "equivalent 35mm focal length."

While crop factor may sound like a good thing [free additional focal length, which wildlife photographers love], the smaller image sensors will frequently have smaller sensing elements [pixels] on their surfaces.  Smaller sensor elements means less light can be captured [per pixel], which means less contrast and detail.  Think of the individual sensing elements as a test tube.  The image sensor has thousands upon thousands of pixels [test tubes] arranged in neat rows across its' surface.  Instead of light falling on the sensor, imagine that it was rain falling on the rows of test tubes.

The full frame image sensor has deeper [wider] test tubes, each of which can collect far more water before overflowing than the more shallow test tubes used on smaller sensors.  This is why images produced by full frame cameras can have more dynamic range [contrast] than APS-C sensors, or other types of smaller sensors.  It is also why you will typically get better performance in low light [conditions] with a full frame sensor.

"Doctor told me to get out and walk, so I bought a Canon."
Report Inappropriate Content
Message 29 of 46 (780 Views)
Reply
0 Kudos
Highlighted
TTMartin
Respected Contributor

"She doesn't have to throw money at her 'problem'. She just needs to develop her skills with the gear she has."

I am just questioning because even my people shots were not in the focus I thought they should be, even when a good distance (say 10 feet) from the subject.  So I am not understanding the issue.

Watching these videos by Canon's Rudy Wilson (at least the first two), will be truly eye opening for you, and will do more for you than any purchase of new gear.

A Look at The Canon Autofocus System Part 1

A Look at The Canon Autofocus System Part 2

A Look at The Canon Autofocus System Part 3