Auto-suggest helps you quickly narrow down your search results by suggesting possible matches as you type.
Showing results for
Search instead for
Do you mean
Reply
Topic Options
pmistyhn
Occasional Contributor

Hi, everyone!  I'm new here.  I'm a little frustrated with my camera and it's blurry photos, and I'm hoping to get some help from you pros.  I've used the lens for surf photography - always use a tripod.  The waves will look great, detailed water spray off the back of the surfboard, but the surfer....a blurry figure.  I've tried shooting in manual, I've tried shooting in sports mode, I've tried taking video to see if I could pull decent still shots, but all blurry and disappointing.  Do you have any suggestions for me?  I need the surfer to be tack sharp.

Thanks, in advance, for your suggestions.

If anything else in the shot is sharp, you probably are not focusing on the surfer. Also, 200 mm is not very long, how big is the surfer in the shot? You can expect some blurring if you zoom in 100 - 200 %. 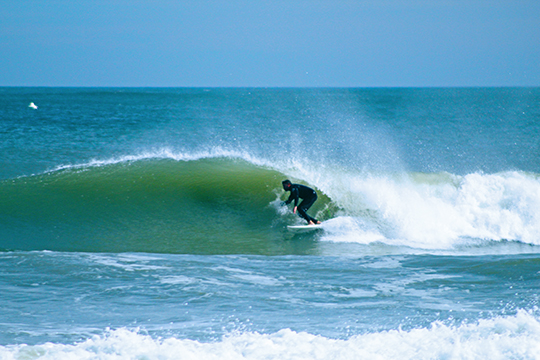 That photo is not too bad. It is about what to expect with that lens.  This is especially true since it looks like you already cropped the photo down to 4862x2390 from the original 5184x3456

The EF 75-300mm is an older design and not as sharp as some of the newer lenses from Canon. It also lacks Image Stabilization.

Like most older lenses, this lens is not at it's sharpest when shooting wide open at f/5.6. Put your camera in Av mode (aperture priority mode) and use f/8 aperture for better sharpness.

Changing to f/8 will cause your shutter speed to drop to 1/800, so you could also change the ISO to 400 so that the shutter speed will be fast enough to stop the action.

If you can, I would upgrade to the EF-S 55-250mm STM lens. Even though it is not quite as long, it is much sharper at 250mm,  and you will get better photos, even when cropped slightly to match 300mm.

Hi, Mike.  Thanks for the feedback. I appreciate it.   I will try your setting recommendation as well as look into the newer lens.  I wasn't ready to give up on the camera just yet, but I need to see better photos, sharper detail.  I'll let you know how I do next time I'm out at the beach!  Thanks again.