Auto-suggest helps you quickly narrow down your search results by suggesting possible matches as you type.
Showing results for
Search instead for
Do you mean
Reply
Topic Options
Highlighted
amatula
Frequent Contributor

Re: You Should watch a few free video tutorials on the "expos...

I will try Evaluative Mode!

That is my daughter-in-law's name BTW

, what you have is good equipment. You don't need anything else to make this type photo look good.  Certainly a prime lens like the 35mm f2 or 40mm Pancake is not a first choice.  I would advise against either for you.  They are too specialized for most people and situations.

Was there a reason you selected these settings?  For the shot you offered as a sample really doesn't need any special attention.  Using the "P" mode would work just fine.  ISO 400 is just fine. f9 is good and has a decent DOF. 1/400, OK shutter speed and center weighted is OK.

The -1/3 exposure comp is not needed and is not helping. Matter of fact it is hurting. Fix that, set it to zero.  I almost always, 99.5% of the time, use just the center focus point. Go into the menu and turn all the other off.  Leave just the center one active.

Are you doing any post editing?  If you do, less is more, most of the time.  Use the sliders sparingly. Especially the crop tool.  Photos degrade rapidly as you crop exceedingly.

"Would a 3/4s or mirrorless work better for my needs?"

IMHO, absolutely not.  Mirrorless is not ready for prime time yet.   They are getting better but are not as good as your SL-1.  If you would like to try a mirrorless give the PowerShot G1 X Mark II Digital Camera a good look over.

This is very helpful, especially the advice on lens.

And Annie is a great name IMO

But I find sometimes it is better to overexpose the photo a bit later.

I don't like to modify my photos much. The photo I submitted here was unmodified; I just sized it for the forum's size requirements.

I usually only crop off about 1/4 inch or less on the edges, and usually add contrast for photos where there is some blur and/or adjust lighting as needed (I love color curves!).

You got my attention with the comment that "I am always checking for f/8".  Stop doing that!

Perhaps you've come across one of the numerous "f/8 and be there" articles on the web: http://www.adorama.com/alc/0013109/article/f8-And-Be-There

The idea of f/8 is blamed on Arthur "Weegee" Fellig.  He was a press photographer famous for always capturing the mood of his press photos (often they were rather morbid).   But part of this idea is that if you use a higher focal ratio then you increase your depth of field.  We now know that if you go crazy with this idea (you could shoot at f/32) you actually do soften the overall image due to the property of physics known as "diffraction" (back in those days film DIN/ASA (aka "ISO") wasn't very high so there were practical limits on ASA values unless you could control the shot for a longer exposure time.)

Anyway... it's true that a higher ISO will increase the depth of field and put more in focus.  It's also true that many (possibly even most) lenses are not their sharpest at "wide open".  There's a "generalization" (and I put that in "quotes" because generalizations aren't absolutely true... they are merely often true) that most lenses tend to produce their sharpest results if they are stopped down by a couple of stops from whatever "wide open" is for that lens.

Photographers who absolutely agonize over "tack sharp" probably should not be trying to shoot in a hurry (unless they have a lot of experience.)

I fear you might be under the impression that "if I just do ____, then I should have amazing photos".  I wish that were true ... then we'd all be amazing photographers and nobody would ever be disappointed with their photos.  Unfortunately the path to improving photography consists of learning thousands of tiny lessons... each getting you incrementally closer to your goal.

Considering your composition, the focus isn't too bad.  If I crop in for a more interesting composition (the head, shoulders and and "peace" sign ... Slightly left of center frame... And ignore the quad) then the shot is much more interesting, but soft.  But to get that shot, you'd want to compose this differently, use a longer focal length, probably a lower focal ratio, and don't worry about f/8.

For example, take a look at this:

That shot (of the Irises in bloom) has a background of a cottage patio with people enjoying afternoon tea... but you don't see anyone having afternoon tea because the background is deliberately blurred out to pull attention to the flowers.

You can count the whiskers on his chin... but once again the background is deliberately blurred out (not as extreme as the previous shot.)

If what you see in the scene doesn't add to the image, get rid of it.  Don't worry about f/8.  It has it's place... if you're shooting landscape photography then you want to maximize what you have in focus (in which case you might go to f/11 or f/16).

In your image, I would probably go after a more interesting crop... there's a lot in the image that doesn't add anything to it and the bits that do add to it are a bit smaller then I'd like.  So here's what I *might* do... get in close... fill the frame with more of the subject you actually want: 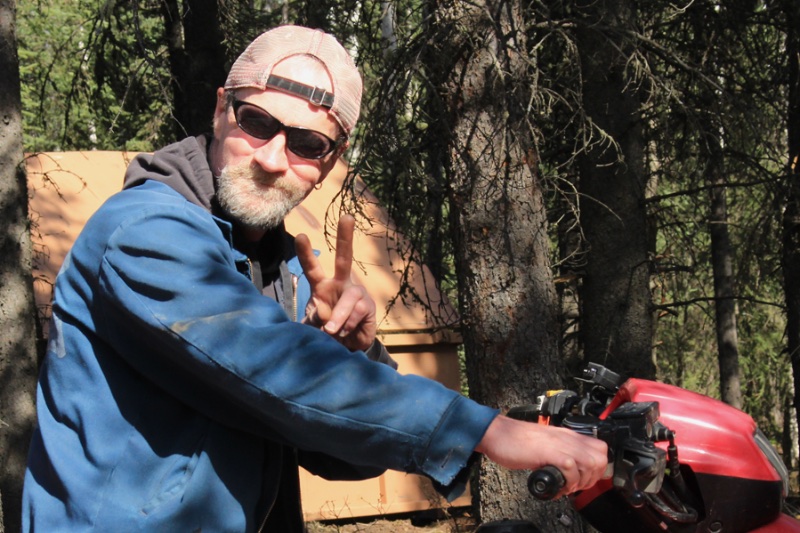 The image is a bit over-exposed (highlights are really bright) and yet the shadows are very dark.  Pop up your flash (yep... use the flash during the day).  That will help pump just a little light into those dark shadows so they aren't so extreme.  I typically set the "flash exposure compensation" (FEC) at a value near -1 (-2/3rds might work) which means I don't want the flash to eliminate the shadows... I wans the shadows... I just don't want really dark extreme shadows.  An FEC of -1 will cause the flash to fire at 1/2 it's normal power which will produce mild shadows (and adjust your FEC to taste to get the strength you want.)

Lastly... not all lenses are equal.  I love shooting "portraits" with my 70-200 f/2.8 lens even though you might think that's a telephoto you might more closely associate with sports.   In fairness... I think most of the links I posted (possibly all of them) were shot with a Canon EF 300mm f/2.8L IS USM.  But I do take a lot of shots with my 70-200mm f/2.8L IS USM.  Canon makes some amazing glass.  It does cost a bit more.  Not all of these lenses are expensive.  The EF 85mm f/1.8 USM isn't terribly expensive and yet offers a high focal length and low focal ratio.  On a budget, the EF 50mm f/1.8 STM offers a sharp image at a low focal ratio and is one of the most affordable lenses in the entire Canon lineup.

The links I offered above are all shooting at a low focal ratio.  That's not necessarily a good idea either... this produces a very shallow depth of field and if you're not careful it is easy to miss focus and not have anything you really cared about in sharp focus... but if you ARE careful then you can get tack sharp focus on your subject and a nicely blurred background (or foreground).  Sometimes backing off a bit... say f/4... offers a bit more depth of field and is more forgiving while still offering a moderately blurred background which pulls attention to your focused subject.  You should experiment.

The camera is just going to record whatever image you project onto the image sensor.  It's the lens that projects that image.  It's the focal ratio and focal length that help determien the depth of field (how much is in focus).  And it's your job to select the composition, cropping, lighting, and exposure settings.

This is really helpful.

I like your idea too of using fill flash.

So I will switch to portrait mode and see the difference; fun to play around... I just have a perfectionist streak and like things perfect first time 'round!

Again, I appreciate the responses I received from you and everyone else on this forum. Thank you!

This is really helpful.

I like your idea too of using fill flash.

So I will switch to portrait mode and see the difference; fun to play around... I just have a perfectionist streak and like things perfect first time 'round!

Again, I appreciate the responses I received from you and everyone else on this forum. Thank you!

Remember that if you're using an on-camera flash, the light comes from a different direction in portrait mode. Sometimes it's better to stick with landscape mode and crop the picture to the right aspect ratio.