Auto-suggest helps you quickly narrow down your search results by suggesting possible matches as you type.
Showing results for
Search instead for
Do you mean
Reply
Topic Options
Highlighted
DCTWINKIEP
New Contributor

Like a basketball game?  A flash will most likely get you thrown out of the gym.  As it will with any indoor sport I know of.

If on the other hand you want a good general flash, get the 430 EX II but keep it out of the gym.  It will work seemlessly with the Rebel T5i.

It will be used more for high school band concerts no sports. And thank you for the response.
Report Inappropriate Content
Message 3 of 10 (7,264 Views)
Reply
0 Kudos
Highlighted
ebiggs1
VIP

I am sorry but it is still not a good idea.  With the T5i and what I am going to guess, you have the standard kit lens with it?

A better choice would be a faster lens.  This is a lens with a small f-number like f2.8 or f2.

If I were you, and actually I am as I shoot hundreds of HS band concerts, I would save the flash money and look for a fast lens.

On the T5i a fast lens will do a great job.

@DCTWINKIEP wrote:
It will be used more for high school band concerts no sports. And thank you for the response.

There are exceptions; but in general, a flash bright enough to make a significant difference in a large hall is bright enough to distract the performers and/or the audience. It's one thing if you're the official event photographer and have coordinated your shooting with the producer or director, but otherwise you really shouldn't do it. Civilized photographers should not stoop to behaving like paparazzi.

Thank you for this information as this is my first non point and shoot. I did use the camera this weekend and cannot believe how little light it takes to have a good bright picture. So from what I have seen no external flash is needed yet. Thank you all for your input.
Report Inappropriate Content
Message 6 of 10 (7,119 Views)
Reply
0 Kudos
Highlighted
Skirball
Respected Contributor

@DCTWINKIEP wrote:
It will be used more for high school band concerts no sports. And thank you for the response.

There are exceptions; but in general, a flash bright enough to make a significant difference in a large hall is bright enough to distract the performers and/or the audience. It's one thing if you're the official event photographer and have coordinated your shooting with the producer or director, but otherwise you really shouldn't do it. Civilized photographers should not stoop to behaving like paparazzi.

On the flip side, if flash photography is not prohibited then you can expect a light show of flashes to be popping off the entire time.  Most of them from cell phones far too weak to actually make any difference in the photo.  Even if flashes are prohibited there's usually still an assortment of them.

It depends on the venue, but if flash photography is allowed then it'll be done, and having a flash (that is actually doing something) isn't going to be noticed any more than the rest.  However, with a good flash and good telephoto you can get some great pics.  You don't need to light the scene by flash, but splashing a little extra light can go a long way.

Don't do it.  Don't be that guy!  This is not a good idea.  Flash has it's place but not there.  It seems there is always one!

While I highly recommend "owning" an external speedlite and learning to use it as an off-camera flash... don't use one at a concert.

Not just for the reasons others have mentioned here (the distractions), but also because frankly you wont need it.

Here are a few concert photos I've taken over the years... none of these used a flash.

The first image was taken with my original T1i.  The image was shot at ISO 3200 (which would ordinarily be very high noise) but I've "de-noised" the image via Noiseware Pro (by a company called Imagenomic.)  So this isn't straight-out-of-the-camera, but it is representative of what's possible.  A T5i is, of course, a newer camera with better ISO performance. 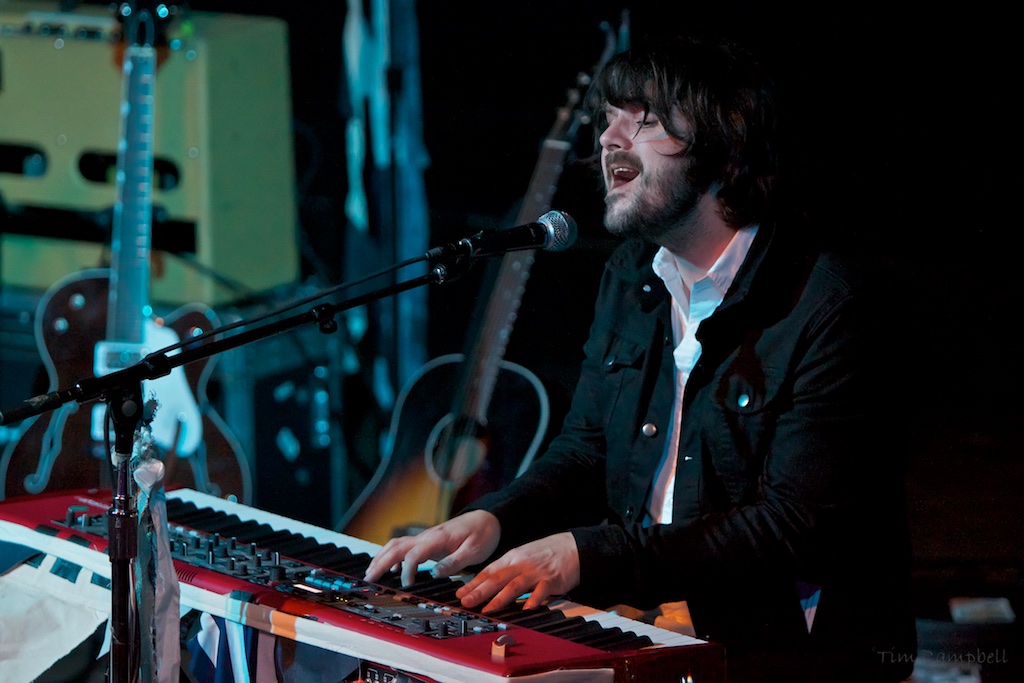 This next image was shot with my 5D II... but at ISO 6400.  This image technically does have noise (though you probably can't see it at this size.)   If I inspect the shadowy areas, I do see a tiny bit -- but not enough to fuss over.  I did not bother to de-noise this image. 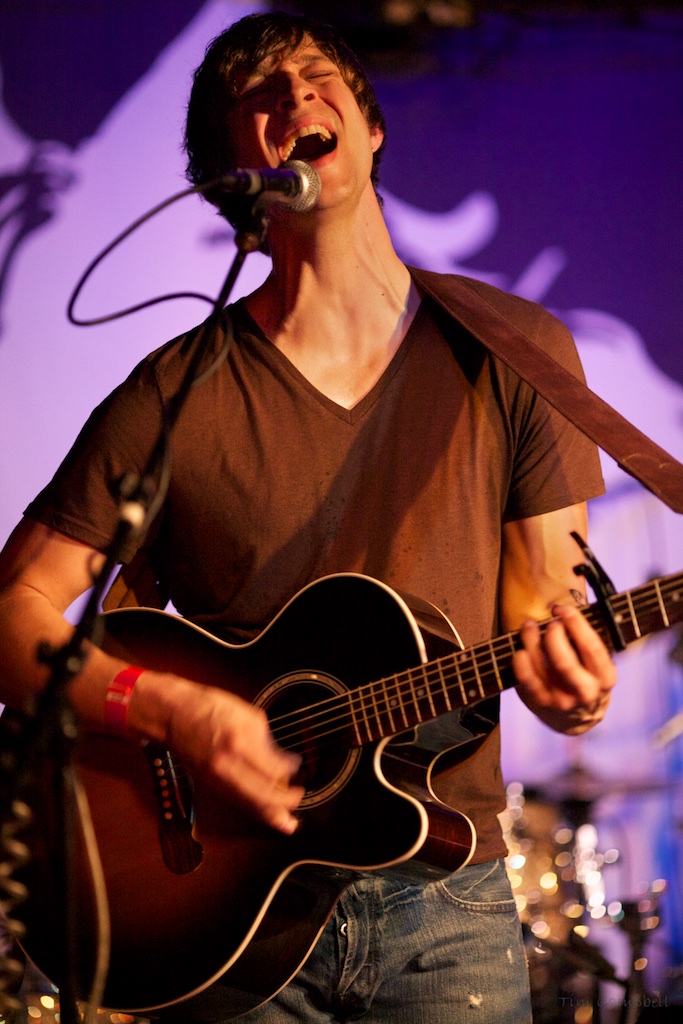 This last image was taken with my 5D III.  This was shot at ISO 3200 and basically has NO noise in it whatsoever.  I post this because you can see I'm basically in a black room with a small amount of light on the performers (in this case Jon McLaughlin). 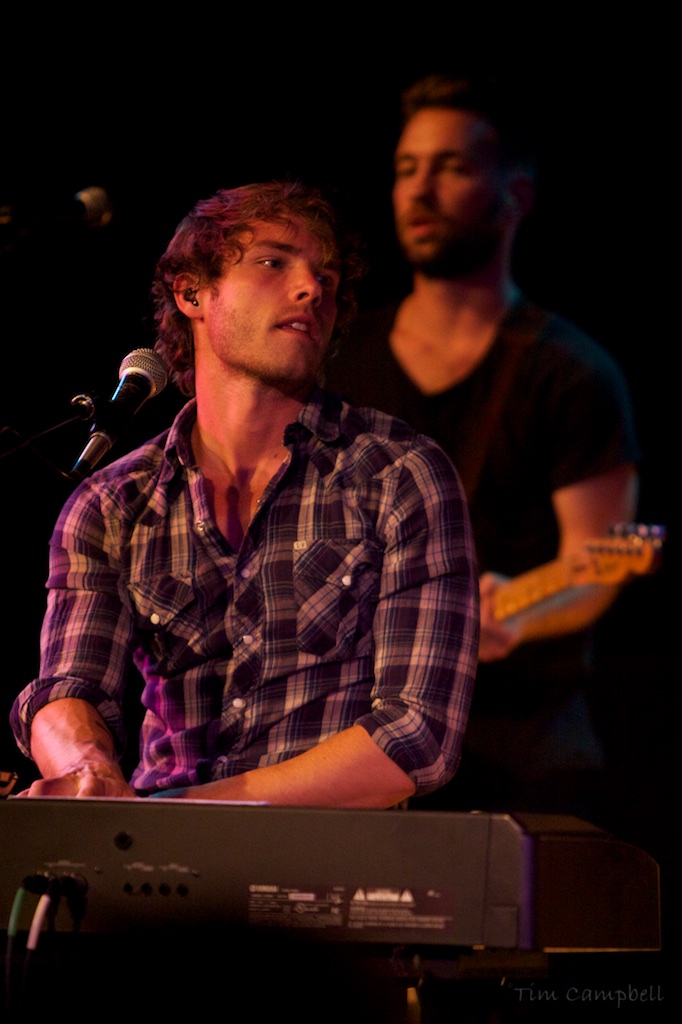 None of these used flash.  You will NOT be shooting in less light than this last image (which I shot at ISO 3200.)

As a tip... when you meter these shots, the default "evaluative" metering mode will noice all the blackness, assume the shot needs more light, and will tend to try to over-expose the shot (because it can't believe the background is actually supposed to be black.)  To get around this you'll either need to use spot metering and meter on the performers OR use exposure compensation (this last shot of Jon McLaughlin was shot with exposure compensation set to -1.3 stops because a netural exposure compensation would have over-exposed his face considerably.)

Ahh.  Ok, I recant my statement.  I assumed gym band meant more like a marching band, before/during a game, pep rally, etc.  With everyone up in bleachers.  Yes, if it's that kind of band/setting with lighting, then obviously don't use flash.  But you're really going to benefit from moderately fast glass.

However, I don't think I'd say that's the darkest setting you're ever going to shoot in.  The stage lights are actually really **bleep** bright...  and hot.