Auto-suggest helps you quickly narrow down your search results by suggesting possible matches as you type.
Showing results for
Search instead for
Do you mean
Reply
Topic Options
RobertTheFat
Honored Contributor

Re: Dull Images on 600D and Speedlite Question

Here is another. seems to lack contrast

It does seem to lack contrast, but you have to see it from the camera's point of view. If it simply added more contrast, the highlight in the cloud would get brighter, but the foreground would probably get even darker. IMO, the biggest problem is in the exposure level. Most of the picture is too dark, but the camera is trying to avoid a blown highlight. You could tell some cameras to meter on a selected autofocus point, but I doubt the 600D supports that. What you could try is changing the metering mode from evaluative (the default) to center-weighted averaging. Since the center of the picture is dark, the change in metering should increase the exposure somewhat. If that doesn't work, you could apply, say, a half stop of exposure compensation. Or shoot in RAW mode and brighten the picture in post-processing.

Re: Dull Images on 600D and Speedlite Question

It's not that it lacks contrast... the camera nailed the shot.  Let me show you the histogram for this image: 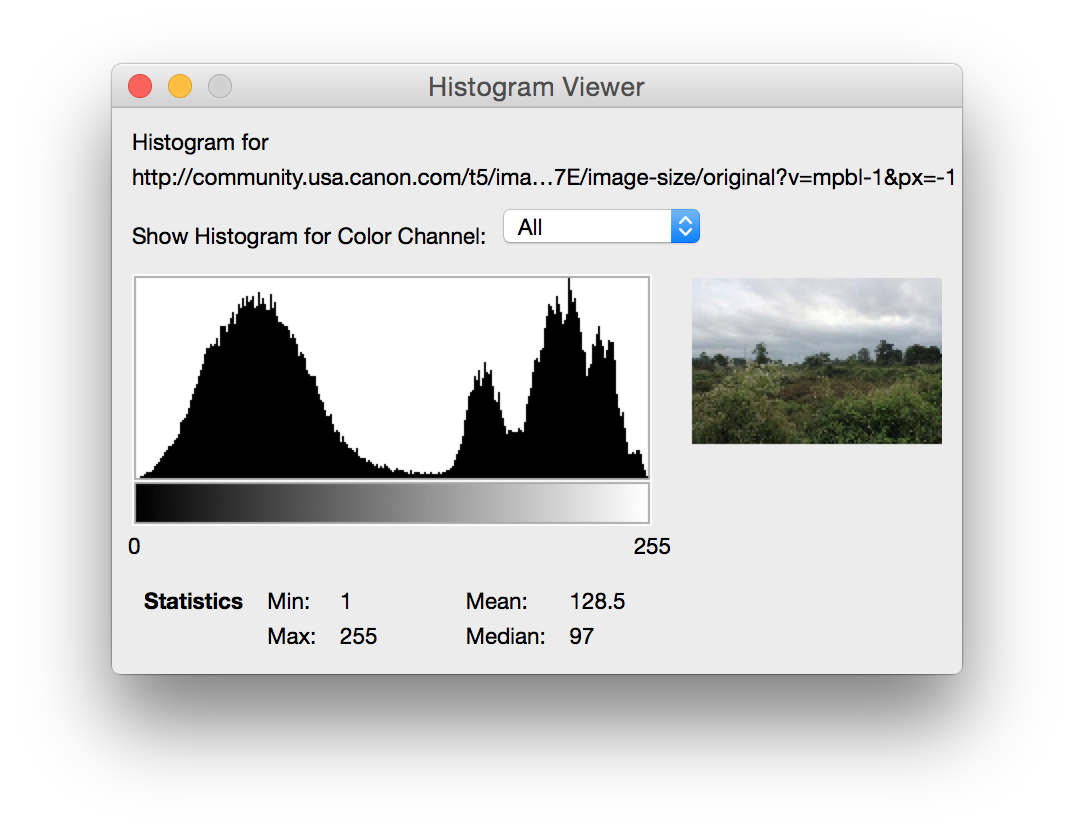 You'll need to know what a histogram is.  Here are a couple of good articles:

On the left edge of the histogram, you see a "0" and you can think of this as "black", on the right edge you see "255" and you can think of this as "white".  The X axis on this graph represents each value of tonality from black to white (ever possible shade of gray the camera can produce. (it is also possible to look at the histogram for an individual color channel, but this is the combined histogram and is all you'll usually need to review.)

The Y axis height of the graph at each point along the X axis indicates the count of pixels that happen to represent that particular level of tonality or brightness.

Sometimes when we look at a histogram, the data is bunched up to one side or the other and this MIGHT indicate an overexposure or underexposure problem.

Let's look at your leaf on tree stump photo: 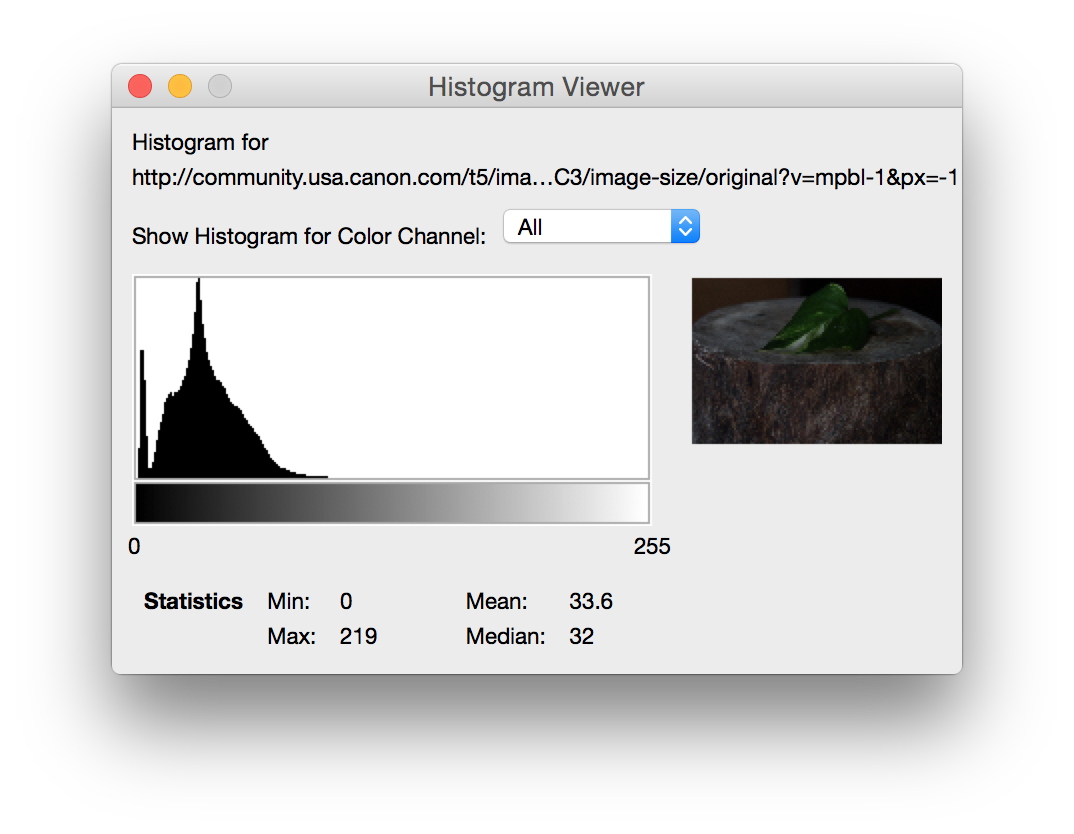 Here you can see the data is jammed over to the left side... if we were taking a photo that was actually SUPPOSED to be mostly blacks then this would be expected and wouldn't indicate a problem.  But this photo isn't supposed to be mostly blacks... so this tells us that the image is underexposed.

Let's look at your tree on the meadow histogram 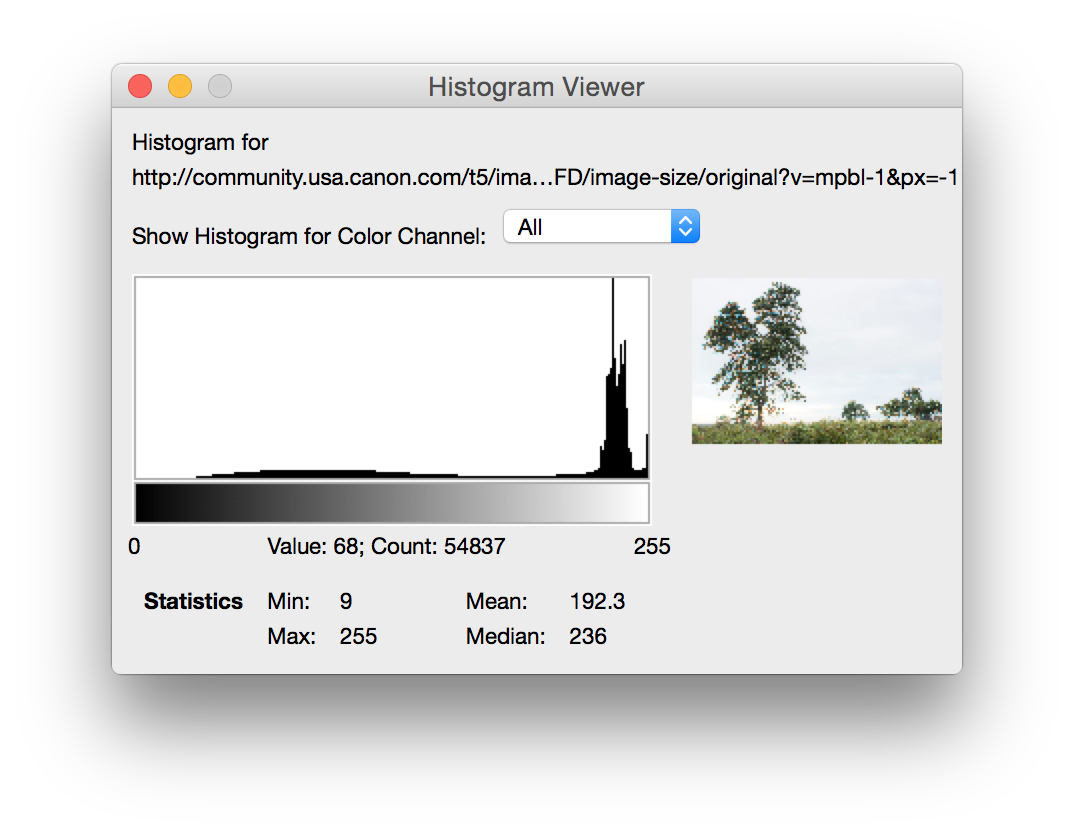 And here you have the opposite problem... all the data is jammed over to the right.  This image is over-exposed.  Again... if we were expecting to capture a mostly "white" photo, then we'd expect a correct exposure to show more whites than darks and that wouldn't indicate an overexposure.  But since this isn't supposed to be a mostly white photo, it does indicate that your image is over-exposed.

But back to that first image... the histogram is spread across the whole thing... but it looks like two mountains with a vally between them.  This means you have a lot of fairly dark stuff and a lot of fairly bright stuff... but not many mid-tones.  Consequently the brights aren't particular spread out (if you isolate JUST the sky, it doesn't have high contrast) and similarly neither do the darks (if you isolate JUST the land, it doesn't have particularly high contrast).  But as a whole image, it does have high contrast even though you don't particularly like the shot.

Good landscapes require a bit of knowledge about exposure and dynamic range.  It turns out landscape photographers might employ a couple different techniques to cheat this and get a better result.

One method is to shoot HDR images, the other is to use something called a "gradient neutral density" filter.

The gradient neutral density (or sometimes called "grad ND" or "ND grad" and sometimes just "grads" for short (even though there are color grads which are not neutral) are easier to understand.  These filters are clear on one half and tinted on the other half.  You place the filter in front of the lens so that the tint is covering the sky, and the view to the land is going through the clear half of the filter.  This allows you to bring up the exposure of the land (so it's not so dark) while REDUCING the exposure on the sky (so it's not so bright.)  It makes a more balanced result.

This is a good tutorial into how Grad ND filters work if you're curious, but... don't go out and try to do this yet.  You need to learn more about controlling the basic exposures on your camera first.

I also mentioned the HDR technique.  HDR stands for "High Dynamic Range" and it actually involves taking several exposures (usually 3 or more) which are all identical EXCEPT for the exposure (which is varied only by changing shutter speed and NOT by changing the aperture value.)  That implies that you have a tripod.  There are lots of videos which explain how this works.  But the general idea is one image captures the "right" exposure, another is deliberately underexposed, and another is deliberately over-exposed.  The computer assesses the area that was too dark in the "right" exposure, and grabs those very same pixels from the "over-exposed" version of the image.  It identifies the bright area in the "right" exposure and it grabs the same pixesl from the "under-exposed" version of the image.  I've massively over-simplified how it works to convey the general ideal... but the result is an image in which everything is nicely exposued and you see lots of details in the dark areas as well as lots of details in the bright areas.

I do see that you're leaving the camera in "Aperture Priority" (Av) mode and that you've been adjusting the exposure compensation for several of them.  In other words, the camera is doing EXACTLY what you told it to do... but probably not what you WANT it to do.

You'll want to learn more about how exposure works.  This is fundamental to photography.

I HIGHLY recommend that you pick up a copy of Bryan Peterson's book "Understanding Expousre" -OR- you pick up the Scott Kelby "Digital Photography" series of books (now up to 5 volumes in the Scott Kelby series, but what you want to learn is in the first couple of books.)  Both of these are probably the most recommend books for beginners and they do use language that doesn't assume you speak the lingo (they wont throw around terms that leave you confused.)  The books are actually written for beginners.