Auto-suggest helps you quickly narrow down your search results by suggesting possible matches as you type.
Showing results for
Search instead for
Do you mean
Reply
Topic Options
WalkerLena
New Contributor

Do you upgrade your camera firmware? Should you?

Hi! I'm a Canon EOS 200d user. I've had the camera for about 2 years now and I've never updated the firmware cause I never really thought about it. Just now, I saw a video that mentioned about camera firmwares and realized I never upgraded mine.

I got a couple of questions I'm hoping this subreddit can help me with:

I personally always update firmware myself.  Not only on cameras, but other electronics as well.

Having said that, some may point out that there is risk is doing so.  But personally, I've never had any firmware updates fail on my Canon DSLRs or any other electronics over the decades.

You can always check to see if the updates fix a particular issue you are having or with a feature you plan to one day use.  And if nothing applies, you could skip it.

But, I'm pretty sure that the update documentation may not exhaustively outline every single fix.  This comes from a software engineer where release notes generally just outline the most important fixes.  But often times, several of the minor fixes get lumped into phrases such as "General performance and stability fixes."

I believe what Ricky said is true.

Here is the update for your body:

The feature enhancement in this case is NFC support for Connectivity to Android v10 or later, but as Ricky said, you also get the PTP vulnerability and erroneous display that may appear when some third-party accessories are attached to the hot shoe fixes.

I'm an android user and the NFC update would be important to me.  It might not be significant to you, we don't know.  The PTP vulnerability is pretty obscure. You can read about it here.

I knowingly skipped this FW when is was offered for my body, as I knew I would never find myself vulnerable.  I got it anyway in a subsequent update which included it.

Given your camera's age, I would recommend updating its FW.  This will ensure NFC support, PTP vulnerability protection and more importantly the fix for 3rd party accessories being properly detected hen connected to the hot shoe.  In addition, any stability enhancements that might not be mentioned.  Credit to Ricky for pointing that out.

First check the "Tools" menu to see what your current firmware version is.  Each newer firmware update incorporates all the features of previous updates. 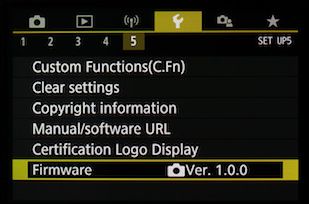 If there is anything that you feel you can benefit from, you can get the firmware here:
https://www.usa.canon.com/internet/portal/us/home/support/details/cameras/eos-dslr-and-mirrorless-ca...

Like Ricky, I always keep my firmware up to date.  In addition to specified changes there are often minor bug fixes or tweaks released with new firmware.

If new firmware is released the day before you have a big shoot planned, that probably isn't the best time to do so because on rare occasions new firmware introduces new bugs but I have never had that issue with any of my Canon products.  My iPhone and iPad are a different story and I never allow updates until the new firmware has been out for a week.

The firmware upgrade process is pretty safe with Canon cameras.  Key things:  1)Make absolutely sure that you have a good fully charged battery in place (NEVER depend upon an AC adapter because a little power glitch can "brick" the system).  My HP Z series workstations can roll back to the previous firmware if something bad happens during an update (I had a power glitch during one firmware update) but I don't think Canon has that failsafe so stay with battery power.  2) And do not touch anything during the update, at times it may appear to be frozen because the update speed isn't linear and it will appear to pause for a length of time at some points but it is still running.

Don't try to use firmware to "fix" a camera that suddenly quit operating properly. A firmware update doesn't fix that sort of issue and if the camera is experiencing problems then your firmware update may make the problem worse causing the camera to completely fail during the attempted update.

"Don't try to use firmware to "fix" a camera that suddenly quit operating properly."

This is the key point to take away from this advice. Always check to see if the FW update does something you want or need.  If it doesn't it is unlikely to be of notice to you if you do it. As I doubt seriously Canon has hidden fixes not reported in the release notes.

Thanks to your question and feedback from experienced users, I found a firmware update for my EOS Rebel SL2. I used the "card reader" method and just finished a successful update of the firmware on my SL2.
--
Walter
in Davie, FL
Report Inappropriate Content
Message 7 of 7 (219 Views)
Reply
0 Kudos