Auto-suggest helps you quickly narrow down your search results by suggesting possible matches as you type.
Showing results for
Search instead for
Do you mean
Reply
Topic Options
YoutubeYogi-
Occasional Contributor

No DSLR (at least none of which I'm aware) will record for more than 30 minutes. If it did, it would be taxed as a video camera by certain jurisdictions. (I believe the European Union is one of them, though I'm pretty sure the USA is not.)

wow thats very upsetting what sd cards do you kno of that can record for 13 minutes or less?

Are you bumpinng up against the 4GB limit? 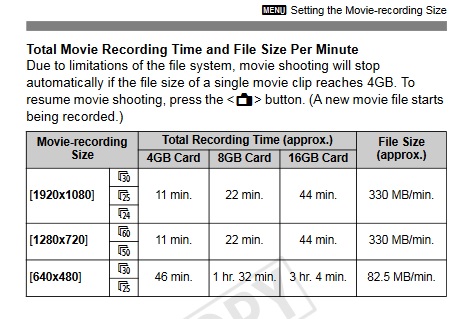 You need to use the link that i provided you, and download a copy of the instruction manual.

"Doctor told me to get out and walk, so I bought a Canon."
Report Inappropriate Content
Message 6 of 10 (5,328 Views)
Reply
0 Kudos
TCampbell
Esteemed Contributor

What memory card are you using today that is stopping after 13 minutes?

What video resolution and framerate are you using?

SO... all manufacturer have camera firmware that stops the video recording after 29 minutes 59 seconds... to stay short of the magic 30 minute mark.

Next possibility... the FAT32 filesystem cannot allow any single file to exceed 4GB file size.  This is an SDHC card standard limitation (all "SDHC" cards use the "FAT32" filesystem format).

You can also have buffer issues.

As your camera records, it starts to fill an internal memory buffer with the video frames... and simultaneously tries to save those video frames to the memory card.   The "buffer" is just what it sounds like... you can think of it like your kitchen sink.  As long as the sink can "drain" water at least as fast as the tap can "add" water, then there's no problem.  But if you've got a fast tap... and a slow drain... you'll be ok for a few minutes... but once the water reaches the top of the sink, it's going to be a mess.  You have to have a drain that's at least as fast as the tap.

So it is with memory cards.  Different cards have different "write speed" performance.  You neeed a card that can support a fast enough write speed.  If your card's "write" speed is just slightly slower than the camera's "recording" speed, then the buffer will start filling just slightly faster than than it can be emtied (by "emptied" I am referring to the camera transfering the contents of the buffer to the memory card so that it can clear more space in the buffer) ... the buffer eventually becomes full and at that point the camera has to halt recording.

It's probably worth testing... the camera does support SDXC cards.  4GB is the limit for the SDHC card standard (which uses the FAT32 filesystem ... and it's ultimatley the filesystem that has the limit).

But the SDXC cards use the exFAT filesystem which doesn't have these limits (it's limits are high enough that no cards yet exist that exceed the limit.)

The file size could also be limited to maintain compatibility with the Movie Utility.