Auto-suggest helps you quickly narrow down your search results by suggesting possible matches as you type.
Showing results for
Search instead for
Do you mean
Reply
Topic Options
danaillie
Occasional Contributor

I am very new to photography.  I just got my camera at the end of March.  I love to take photos my son at sporting events.  He is in Taekwondo and when taking photos at tournaments, we are not allowed to have a flash.  Many of the photos I took recently are blurry.  How do I change the shutter speed when in no flash mode?

You may not need to change your SS.  What is your ISO set on?  For indoor sports you need a fairly high ISO number. 3200 or so depending on model of camera.

You didn't mention which camera and lens you have?  Guessing a Rebel with the standard kit lens, for example, may present a real challenge to get sharp photos of indoor sports because of the very slow kit lens.  If it is a Rebel and you are using the 'green square' mode, as you have noticed, it won't work.

Can you provide more info on camera/lens and lighting situation.

Thank you so much for replying.  I had the camera set to the standard "No Flash" setting.  It is the mode that had the flash symbol with a slash through it.  I am not sure what the ISO is set to at the setting.  When I get home with my camera I can reply back to you.  I am also using the Canon Zoom lens 18-55mm.

Still don't know which camera you have.  Your camera should have a TV mode, which is  "Time Value." It lets you adjust the shutter speed manually.  Some also have Sport and low light settings as pre-sets.  Have you read your manual, which explains the various settings, modes, and how to use them?

There may be three or four reasons why you get blurry shots.  Posting an example of one of these shots will help us identify your specific situation (especially if you can post the image so that all of the shooting information (aka "EXIF data") is in the image that you shoot.  Specifically we would want to know what focal length, what aperture value (f-stop), what shutter speed, and what ISO setting was used when the shot was taken.  But there are also other bits of information in the EXIF data such as which shooting mode was selected, which focus mode was used, and which focus point was used to establish focus.

A picture would help... but a picture that included all of that shooting info would help a lot more.

1.  You may simply be missing focus... the camera used a focus point which caused it to focus on a target OTHER than your son.

2.  You may have been using a very slow shutter speed and your body was not perfectly still when you took the shot.  This is blur caused by camera motion.

3.  Even if the camera did not move, you may have captured a shot when your subject WAS moving ("subject" motion instead of "camera" motion).

Sometimes blur is actually desireable when shooting "action" because it's a way to imply a sense of motion or speed in a still photo (it is used as a creative effect).

But I will guess you are probably shooting indoors and that means there is not likely enough light to allow you to use a high shutter speed.  Slow shutter speeds often result in blur caused by camera movement when the shutter is open.

Tripods and mono-pods can help with camera motion, but there are also techniques to allow hand-held shots by learning to stand and brace the camera in such a way that body motion while shooting is less likely to be a problem.  Also if there is anything you can lean on (a wall, a support column, a door-frame, etc.) this can also help you reduce any camera motion.

You can also select a lens that can collect more light when the shutter is open.  These lenses have lower focal ratio values.  For example, the Canon EF 50mm f/1.8 STM has a physically larger aperture opening than your EF-S 18-55mm f/3.5-5.6 lens.  At the 50mm focal length it collects nearly 10x more light than the kit lens you have.  That translates into allowing you to select a shutter speed which is 10x faster than you can use now.

Another possibility is to simply increase the ISO setting on your camera.  This comes with a trade-off which is that images that are shot at very high ISO values will often appear to be "grainy" (that look is referred to as digital "noise" in the image.)  But better to have an imaging that looks noisy/grainy (technically "grain" is a term referred to actual photographic film photography and "noise" is what we call it when it's a digital image - they are actually not the same thing, but they have a similar look so sometimes people use the terms interchangeably.)   To avoid the "noisy" nature of high ISO photos, we usually prefer to shoot with the ISO setting lower whenever we can.  But when given the choice between a "blurry" shot and a "noisy" shot, I'll take the noise (you can actually do things in post-processing adjustments to reduce the noise but there's little you can do to fix blurry shots.)

There is one other possibility.

I have a Canon EOS Ti Rebel

I tried attaching a photo, but it is too large.  I am also very new to taking photos so I am not aware of how to get teh EXIF Data you are requesting.  I am starting to feel like I am too much of a novice to be on this blog.

What kind of computer do you have? What OS? What photo software do you use?

Do your other pictures come out sharp?

With your 55mm lens, is your son big enough in the frame, or are you enlarging the photo on the computer?

Hi Danaillie, don't worry about feeling like a novice.  Everyone was a novice at some point.

What software do you normally use to view and edit your images and are you using a PC or a Mac?

Canon does include their "Digital Photo Professional" software with your camera and you can also download it from their support site.

You can find it on this page:  https://www.usa.canon.com/internet/portal/us/home/support/details/cameras/support-dslr/eos-rebel-t1i...

To resize your image using Digital Photo Professional, there's an option in the "File" menu to "Convert and save..."  It will open a window similar to this one: 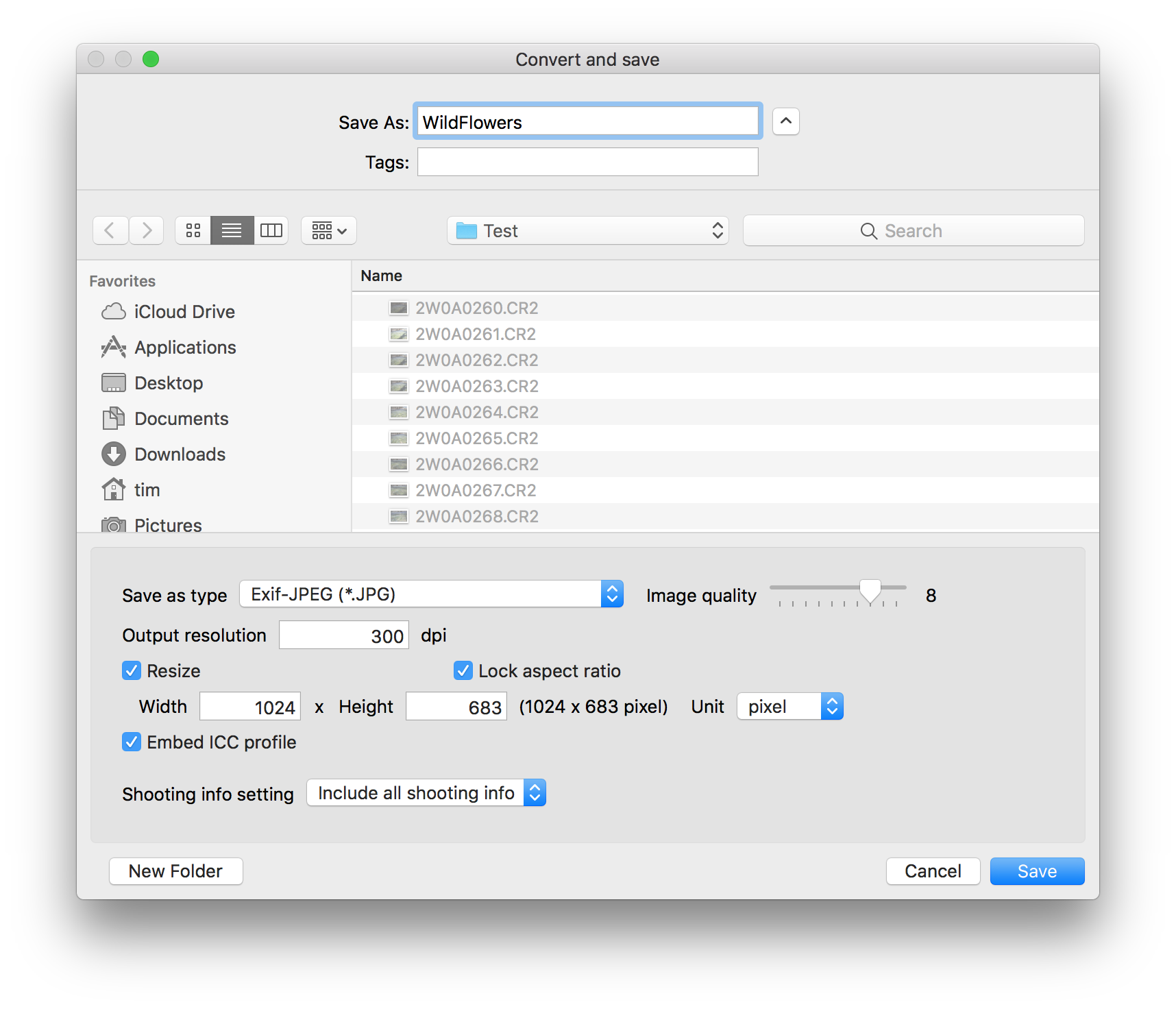 Set the "Save as type" choice to "Exif-JPEG" (that's a JPEG file that still retains the EXIF data which has all the shooting information).

The output resolution isn't actually important.  My example has it set to 300, but the value wont change what the image looks like.

DO check the "Resize" box and also make sure the box is checked for "Lock aspect ratio" (which means the image will still maintain it's correct proportions when you resize it.)

I suggest setting the widest dimension (in this example it's my "width" to a value of around 1000 pixels).  The heigh dimension will update itself proportionally since you had the box ticked theat said "Lock aspect ratio".

The "shooting info setting" should be set to "include all shooting info".  WARNING:  If you had owned a camera that had a built-in GPS, then I woudl suggest picking the choice that says to remove the GPS info IF the photos were taken at a private location -- such as at your house (otherwise people can use it to find out where you live).  However the T1i doesn't have a built-in GPS -- so that's not a problem.  It is usually something to be aware of because most smartphone cameras DO have a built-in GPS and you would want to strip that info from any images that you post online.  If the images are taken at a public location -- suppose you visited the local zoo... then there's no risk of people knowing that the shots were taken at the public location.  This is just something every photographer should be aware of when posting images on the internet that were taken with any camera that has a GPS.

And of course make sure you give your image a name (it'll default to whatever name the camera used such as IMG_1234.jpg and that's fine too.)

Now that you've saved a new copy of your image which is converted and resized to a smaller JPEG file, you should be able to upload it.

BTW you do not have to use Canon's photo software to do this.  Most photo editing programs have an option to resize images.  I'm just using Canon's software as an example because every Canon camera comes with this software -- so it's at least something you have access to use even if you haven't already installed it.

TCampbell -- I have not been using an editing software.  I will download Digital Photo Professional when I get home on my PC.  I have only been using the software that allows me to get the pictures from my camera to my PC.  Thank you so much.  I feel like I have learned a lot so far...lol!  Once I get the Digital Photo Professional on my computer I will upload a few of my blurry pictures for you to view.  Thanks again.